See my Hiking/Trekking Page for other walks I’ve done over the past decade.

I spent most of October 2019 in Bhutan, a small country just south of Tibet in the eastern Himalayas. What drew me there was the long-distance Snowman/Lunana Trek, supposedly one of the world’s toughest. Covering over three hundred kilometers in twenty-three days at high altitude means there is lots of time for something to go wrong – 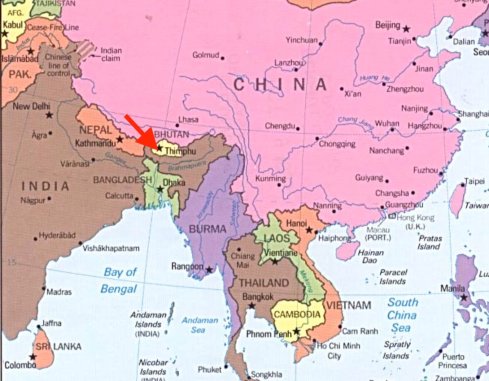 Now back at Base Camp Toronto,  I am happy to report no real problems except for

What follows is a sample of the 500 images I framed during the first 12 days we spent going from Paro to Laya. The end of this post has a complete list of the day-by-day reports, which include maps, more background info, and a few more pix.

Click here to see how one adventure travel agency, World Expeditions, markets the trek!  It is the agency I went with.  Other non-Bhutanese agencies that cater to the  US$250. a day that Brits, Canadians, Americans, Australians, Europeans will end up paying – include:

The agencies offer different versions of the trek with different start and endpoints so keep that in mind when you compare prices!  Some include a stay in Kathmandu and the Druk Air flight to Paro.  In all cases, the actual agency handling the trip will be a Bhutanese one, probably based in Thimphu. Our local agency was Yangphel Adventure Travel.

Bhutan is a country with a population of 800,000. While Thimphu is the capital and largest city, the country’s only international airport is just south of Paro, a town of 11,000 or so pictured below.  I flew in from Delhi where I had overnighted.

the town of Paro with the Paro Chhu flowing down

We spent Day 2 visiting Bhutan’s single most famous tourist attraction – the Taktsang Monastery (aka the Tiger’s Nest’) perched high on the side of a steep vertical rock face. It is a 10-km drive from Paro followed by a two-hour walk from the carpark at the entrance to the site.

Taktsang Monastery to the north of Paro

The next morning we set off for the trailhead at Shana in the twenty-seater bus you see in the image below. An extra pick-up carried our duffels and backpacks. 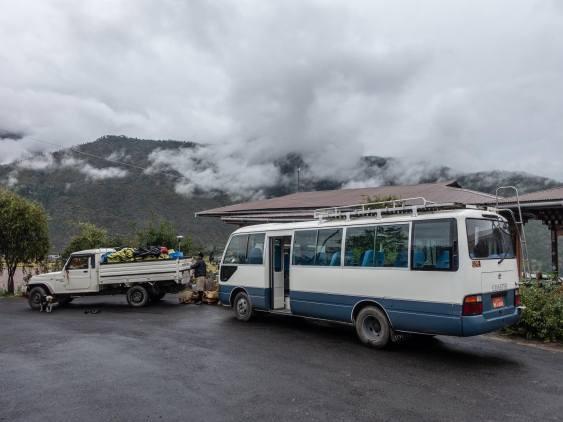 On the way to the beginning of the trail at Shana, we stopped for a half-hour to check out the Drukgyel Dzong, currently undergoing reconstruction. Cloud cover meant that I would not be getting my hoped-for shot of the dzong with Jomolhari in the background! 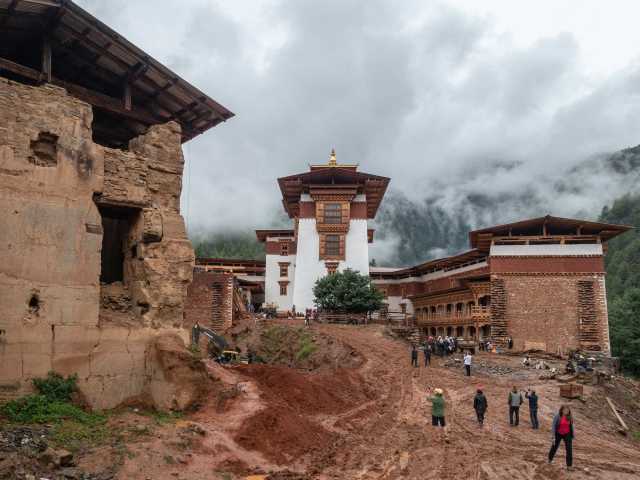 Drukyel Dzong on our way to Shana and the trailhead

The map below shows the variation of the Snowman Trek route we did. 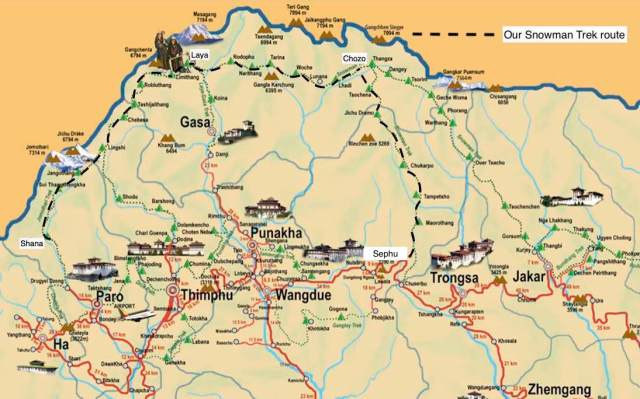 This first part of the Snowman Trek included four of the eleven high passes that we would cross;  campsites were mostly at the 4000-meter level once we arrived at Jangothang and the camping area at Jomolhari B.C.

It was raining when we set off from Shana around 2 p.m.

a view of our first camp on Day 2 morning

Full Report … Day One: Paro To Shana To Thongo Sampa

There were 16 in our trekking party, most with a tent of their own. As well, perhaps ten locals – guides, cook team, tent team, horse handlers.  The horses made up the single largest group – there were 43 of them.  We were a village on the move!

The first three days were spent walking up the Paro Chhu (chhu is “river” in Tibetan). Never far away were the hydro poles and wires that were installed in 2015 to bring electricity to this isolated area of the country.

the Paro Chhu – we followed the wires to Laya!

our Snowman Trek village on the move!

break time by a chorten (i.e. stupa) as we walk up the Paro valley to Jangothang

We got to Jangothang (“thang” means flat area!) and spent two nights there to help with acclimatization. It is at 4100 meters. The big attraction is a view of the 7315-meter Jomolhari.  This is the view you hope to get –

Chomolhari and Jigku Drake from Jangothang

However, the low-hanging cloud meant we were to get only very early morning glimpses of it. Here is the afternoon view from Jangothang!

first view of Jomolhari from the Jangothang stupas

And here is a morning view! It is one of my first pix with a blue sky in it!

On our off-day, we walked up the hillside behind the tents in the image below to access the plateau and its two small lakes. 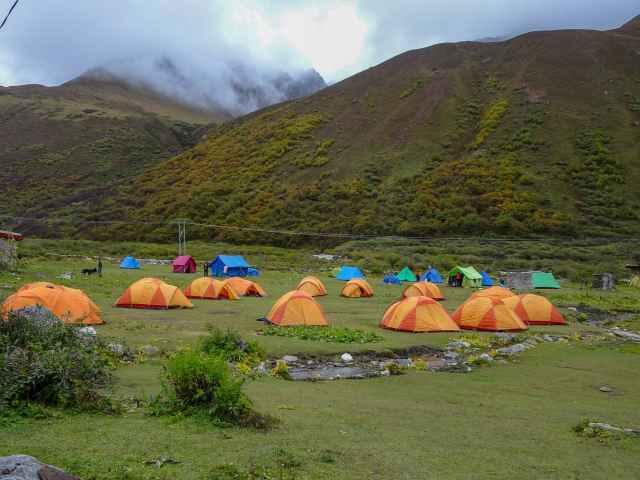 the Jangothang campsite at Jomolhari B.C.

Our morning hike took us up another three hundred meters and served as a good acclimatization exercise.  The image below has us up on the plateau with the lakes just around the corner to the right. 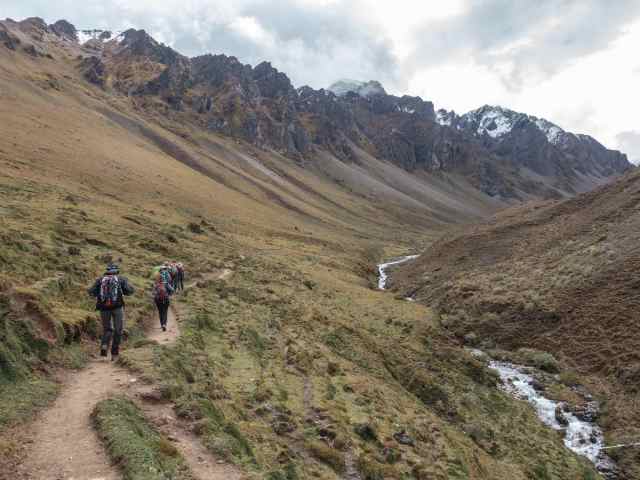 On our way back to camp we got a glimpse of the lower flanks of Jitchu Drake (6850m), one of Jomolhari’s neighbouring peaks.

an afternoon view of Jitchu Drake, one of Jomohari’s neighbouring peaks

We’d get a better – but not complete! – view the next morning as we set off for Lingshi via our first pass, Nyile La (5090m), the first of our eleven high passes of the trek.

Jitchu Drake the next morning as we set off for Lingshi 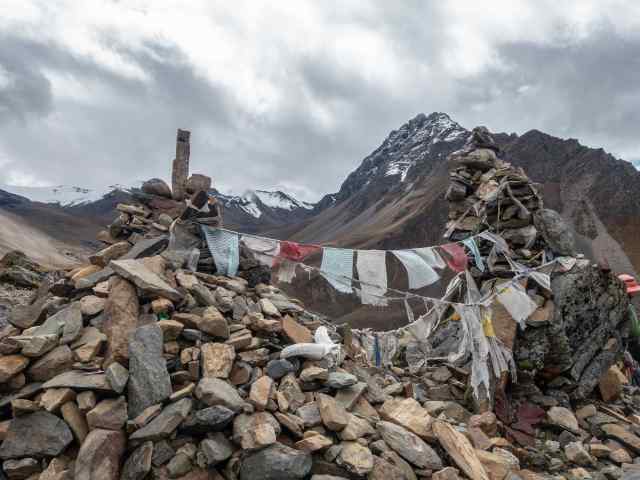 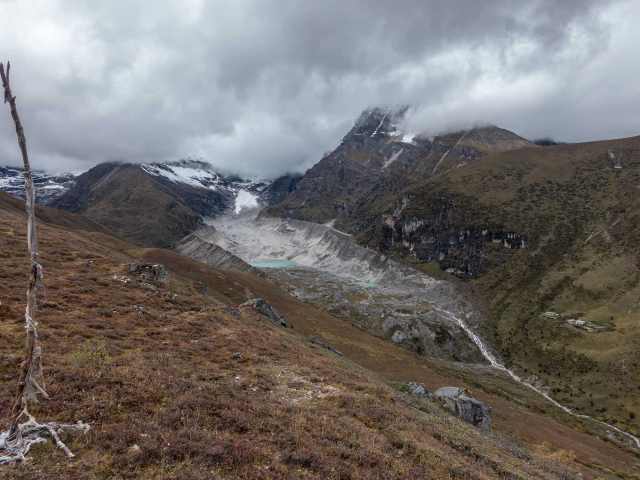 The next morning we would visit the Lingshi Dzong (4300m) on the hill above our campsite. The fort was built in the 1660s, partially destroyed by an earthquake in 1897, rebuilt in the 1950s, and badly damaged again by the 2011 earthquake.  Some bad karma here? Local workers were busy with reconstruction when we visited. 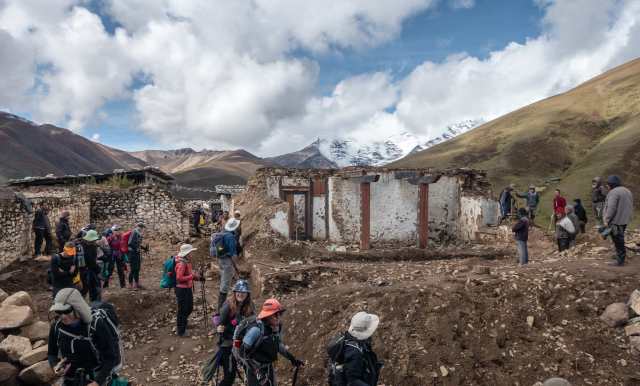 the Lingshi Dzong – under reconstruction in October 2019

This day we would walk as far as Chebisa (3990m), one of the three biggest villages we would visit during our 23-day walk. Our orange tents are already up as we approach.

After putting my duffel and packsack in my tent I went for a walk to the fall end of the village to see the waterfall. It was harvest time and some locals were working in the fields.

A recurring post-supper topic dealt with the exploits and the significance of the Buddhist monk Drukpa Kunley, aka “the Divine Madman”.  His “thunderbolt” is sometimes depicted on the sides of buildings as a good luck charm. With his “crazy wisdom” as perhaps the precedent, exporters of Himalayan (i.e.Tibetan) Buddhism to the West – supposedly enlightened beings like Chogyam Trungpa of the Shambhala Movement and Sogyal Rinpoche of Rigpa – were able to pass off their sexual abuse as Buddha-like behaviour.

From Chebisa it was on to a camp near Shakyapasang. On the way, we would cross Gombu La, at 4400m one of the lower passes of our trek. 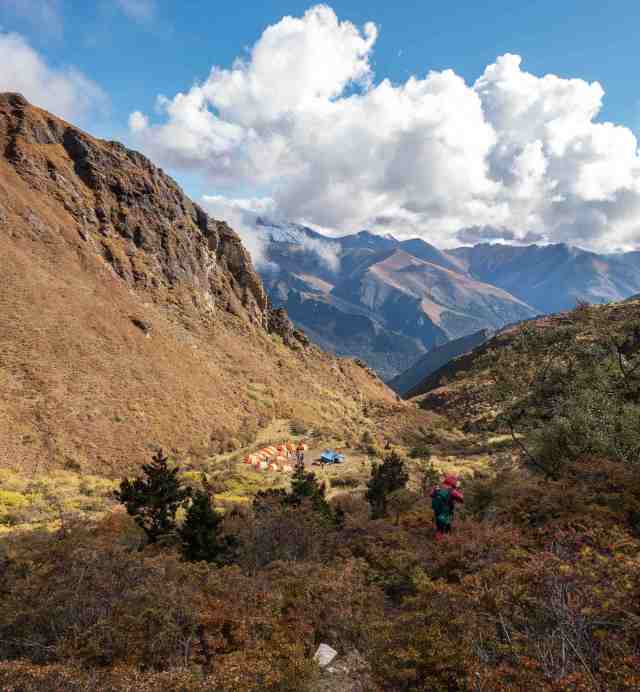 flowers on the Himalayan hillside 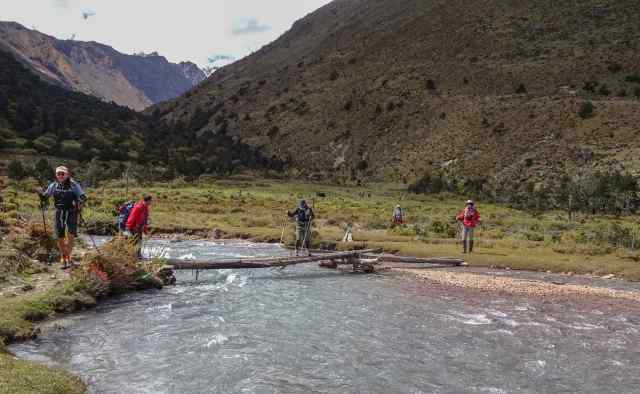 The next day involved our highest pass so far – Sinche la at 5000m. In the image below the tent crew and their horse team is approaching the pass.  About ten minutes later it started snowing!

We ended up setting up a lunch shelter on this side of the pass before continuing. By now everyone had on their rain gear – top and bottom.

Sinche La and our lunch tent just below

We would lose almost 900 meters in altitude by the time we got to our Limithang campsite. The tent crew was still putting up the sleeping tents. Already up was the blue cook tent on the left, the double green/blue dining tent for 16 trekkers in the middle, and the small army green toilet tent on the right-hand side.  The members of the tent crew really knew what they were doing – our tents were often down by the time breakfast was over and often all up by the time we got to the day’s camp.

The first leg of our trek ended at Laya, the layout of which reminded me of what Namche Bazaar in the Nepalese Khumbu may have looked like fifty years ago.

the village of Laya on an overcast October morning

We would spend two nights in Laya, using the day off to rest for the second leg of our trek. Meanwhile,  the guide finalized arrangements for a new horse team to take us from Laya to Chozo in the Lunana district.

Once we got to Chozo, the horses and their handlers would return to Laya while a new set of yaks or horses would be hired to take us down to the end of the trek. The local agency – Yangphel –  which actually organized the trek had all of this figured out and everything – the logistics and camp set up and take down – unfolded without a problem.

horses coming up main street laya on a sunny afternoon