For the past few evenings, dinner time conversation had centered increasingly on our plans after we finished the trek.  Plane connections, work commitments, future trips … all signs that the end was near! Over the past three weeks, we had walked a bit over 300 kilometers through some pretty crappy weather (the first ten days) and over some fairly rough terrain, challenging even to yaks and horses, never mind trekkers! We had also walked into some stunning vistas and in the last half of the trek, the peaks would often be in full view and not be shrouded in cloud cover.

And amazingly almost all of us had made it, though we had lost one in Laya with a severe respiratory issue and another on Day 21 with a stomach problem.

We had one last section to do – the 13 kilometers from Rerethang to the endpoint at Upper Sephu.  We had left the alpine behind; the morning would start on the west side trail down along the Nikka Chhu across fairly flat and open terrain. The satellite image below shows that stretch from Rerethang to Maurothang – easy walking.

After Maurathang, we crossed over to the east side and the trail mostly went across the forested slopes.  On occasion, we were 50 or 100 meters above the river as we made our way south.  Along the way, we also crossed a number of streams that tumble down to the Nikka Chhu -either rock hopping our way across or making use of the wooden bridges.

The red line on the satellite image below is a rough approximation of our route down the Nikka Chhu from Maurothang to Upper Sephu. It took about 3 1/2 hours at a  brisk pace to get done. In the process, we dropped another 800 meters in elevation. We had not been below 3000 meters in three weeks! 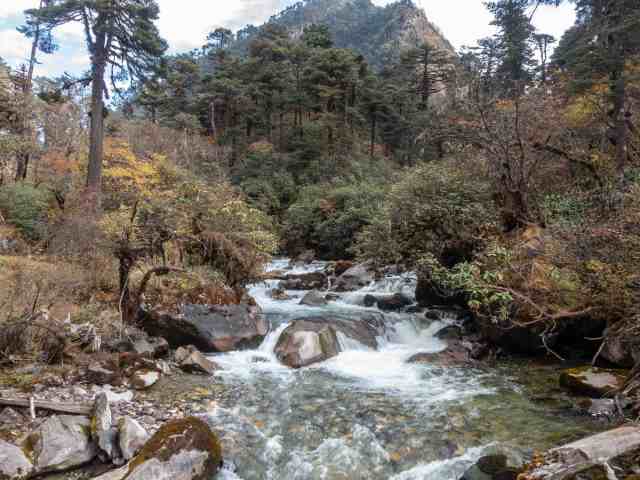 looking up the Nikka Chhu from the trail to Upper Sephu

the Nikka Chhu as it flows down towards Sephu

Somewhere along the way, I had my first hard fall of the trip!  22 days without incident and an hour before the end I placed my right boot on a sloped wet rock only to have it slip down.  I lost my balance and somehow the right side of my rib cage bumped hard into a rock.  The trekking poles I always have in my hands helped reduce the severity of the fall somewhat but it still hurt. It was mild enough that I could keep on walking but every once in a while there would be a stab of pain if I moved in the wrong way.

[It took about three weeks for the pain to go away. Back in Toronto, I had trouble lifting my right leg over the top tube of my bicycle. And then one day – no pain! Don’t you just love how time itself is often the answer, at least in the short run!]

yaks lounging on the trail from Maurothang to Upper Sephu

Upper Sephu is at the end of a dirt road that winds its way up the east side of the Nikka Chhu from the Bumthang-Ura highway and Sephu proper.  I guess a few years ago this road did not exist and trekkers walked right to the highway and the Nikka Chhu bridge, another six or seven kilometers away. 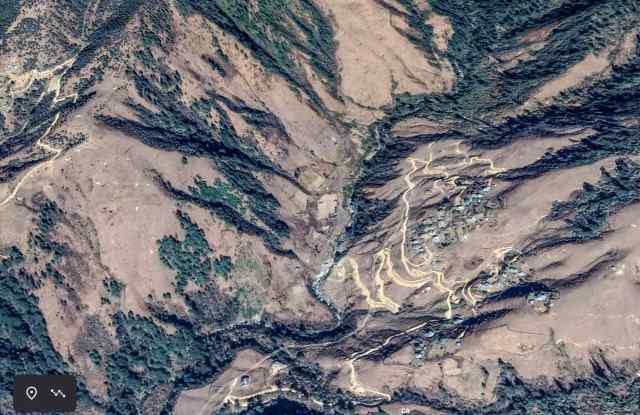 We were greeted there by the Yangphel support team. They had arranged lunch for us, complete with bottles of wine and beer and a celebratory cake.  There we are sitting at our table! 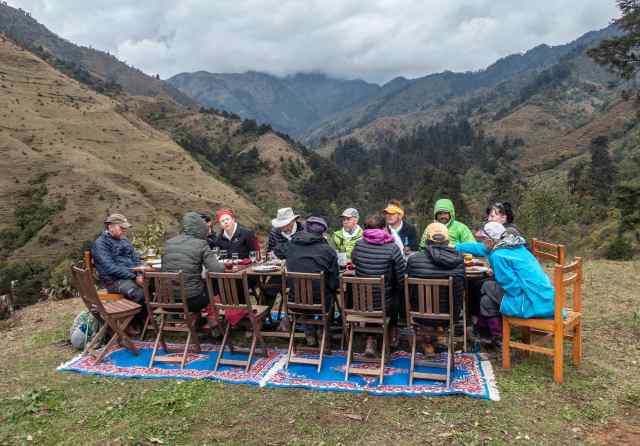 I did gather together some of the left-over bits of meat and gave a local dog watching the proceedings a surprise treat. But then, maybe it wasn’t a surprise!  He may have learned that gatherings such as ours often result in some freebies! 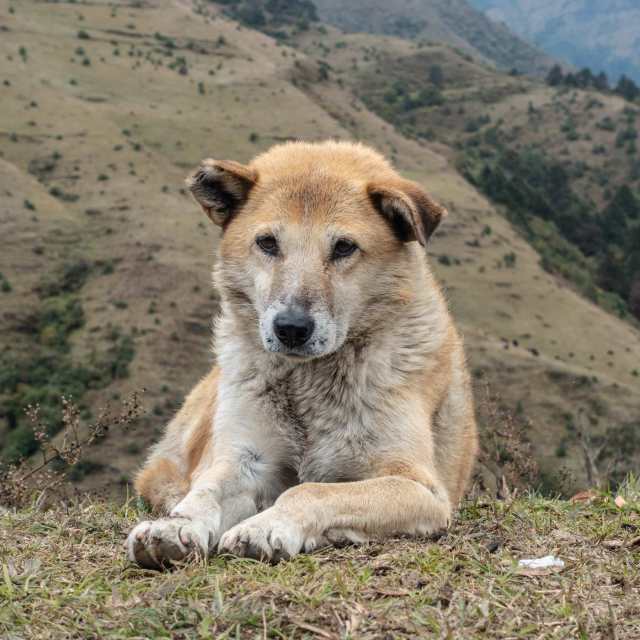 a local dog watching the proceedings at Upper Sephu

Not keen on dealing with the impact of even a bit of alcohol on my head while we spent the next four hours rocking back and forth on the bus, I decided to postpone my reintroduction to beer until that evening. On the table was a bottle of Bhutan’s finest red wine.  Later that evening I ended up ordering a can of tonic water! Fun guy!

Tipping is always a big deal at the end of these treks.  Over the past three evenings, the World Expeditions guide had collected some U.S.$300. to $400. from each of the 16 trekkers and come up with a formula to calculate each support staff member’s share based on their role. The tip – and the concern about it shown by the guides from Day 1 –   was just another reminder of economic reality trumping the ultimate B.S. of the Gross National Happiness concept concocted by Thimphu’s political elite on behalf of the vast majority of Bhutan’s citizens.  The  Speeches made, thanks given, a few group photos of the support crew and their trekker guests, final handshakes and hugs …

the team which made our Snowman Trek happen

As noted elsewhere, World Expeditions was the non-Bhutanese company that organized the trip, brought together the 16 trekkers, made sure that visa and other issues were dealt with, and worked with the local adventure travel agency, Yangphel, to make sure that certain standards were met. I was told that WE has been using Yangphel to handle its Snowman trip for the past two years.

World Expeditions also sent one of their own guides along.  His two decades’ worth of experience with high altitude trekking and Himalayan climbing was a bonus; the local guide assigned by Yangphel was also very experienced and knowledgeable thanks to twenty years of handling all sorts of tours from birding to various trekking routes to a dozen times on the Snowman. Both were just nice guys and made the trip more enjoyable.

The tip is expected by all and added another $375. to the final cost of the trip.

While you could just arrange the trek yourself through a Bhutanese agency,  the problem is one of numbers.  You would need to find at least one and preferably two or three other trekkers who would be willing to commit to the trip at the same time as you.  Thanks to its attractive website, World Expeditions and other companies like it, do the finding of trekking mates for you.  That is worth at least a couple of hundred dollars.

I will admit that a group size of 16 trekkers is not ideal. Consider the three previous organized treks I have done –

There were almost as many trekkers on this Snowman trek as on my previous three combined! With 43 horses and a dozen support staff, we were a small village on the move!

final group shot of the crew – trekkers and support staff

By 1:30 we trekkers would hop into the bus pictured in the image below.  Destination – Punakha and what would turn out to be an excellent hotel/resort on the slopes on the west side of the Mo River.  Showers, wifi, email, food choices, and food choices other than the trek food I had seen enough of …

Yangphel staff at Upper Sephu with our bus to Punakha

Punakha and the confluence of the Mo and Pho Rivers 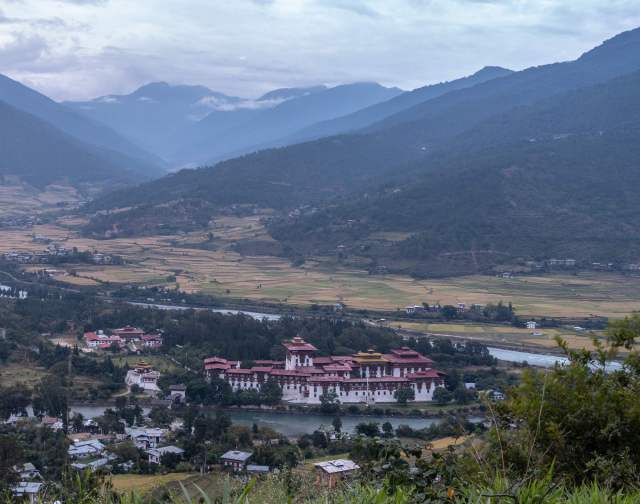 the Punakha Dzong – the view from the Zhingkham Resort 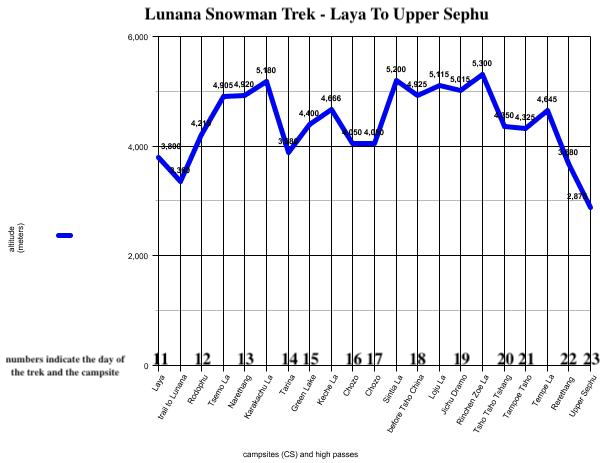