We were looking for a shorter Ontario river system this year, something

We found it in the Steel River system in the Lake Superior High Country to the north of Terrace Bay!

Actually, what we found first was Rob Haslam’s post “Steel River Maps” (see below Mapping the Route) in the Ontario Trip Reports section of the Canadian Canoe Routes forum. In the post, Rob provides the most up-to-date and detailed information on the river – everything from portages to campsite locations to rapids and swifts and logjams.

This post has general info, logistics, approaches, and maps.

Eventually flowing into the north shore of Lake Superior, the Steel River system is smack dab in the middle of the very scenic High Country between Marathon and Terrace Bay.  We have driven past it a few times on Highway 17 up to and back from Wabakimi or Woodland Caribou.  It makes up the core of Ontario’s Steel River Provincial Park, categorized as “non-operating” since it is not staffed by anyone and does not have maintained campsites or portage trails.

An email to Ontario Parks confirmed there are no fees to pay – whether you are an Ontario resident or a non-resident from another province or the US.

Park Facilities and Activities: There are no visitor facilities. Backcountry camping and canoeing are recommended activities.

Even better, we could paddle away from our vehicle on Day One, paddle down the 170 kilometers of the river over six or seven days, and end up right back where we started. It sounded like the canoe trippers’ version of a Penrose Staircase! Escher would be interested! 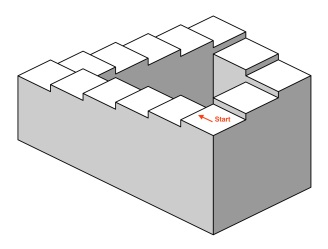 Jacobson, Callan, and Harting On the Steel

More research revealed that the Steel river loop was a tripping favourite of Cliff Jacobson, who has done the loop at least eight times since his first in 1976. Two of his books are in the canoeing section of what is left of my hard copy library.  His extensive paddling resumé made his recommendation worth something. 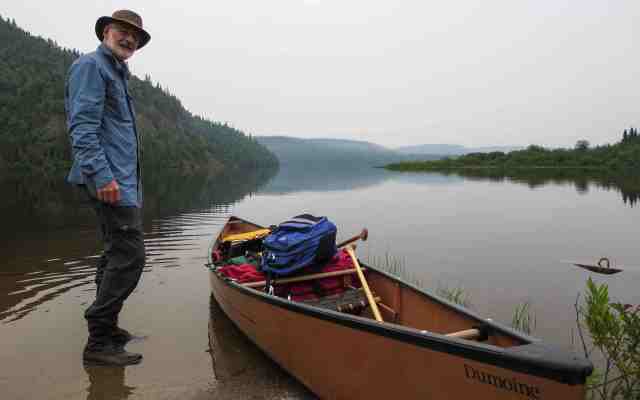 my bro Max at the Santoy Lake Put-in On Day One – calm waters at the start!!

Leafing through a copy of Kevin Callan’s A Paddler’s Guide to Ontario’s Lost Canoe Routes, I found an account of a trip down the Steel that he had done with his wife Alana sometime around 2003.

Included was a map of the route with Santoy Lake as the put-in. Callan has also included the chapter on the Steel River in a more recent compilation titled Top 50 Canoe Routes of Ontario. [A mapless version can be found at the paddling.net website here.]

Sitting next to Callan’s book on the public library bookshelf was PaddleQuest, a compilation of various writers, each describing one of thirty-seven of Canada’s best canoe routes.  Edited by Alister Thomas and published in 2000, the book provided more fuel to stoke our interest.

It has a chapter by the late Toni Harting, noted photographer and past editor of the Wilderness Canoe Association’s journal Nastawgan.  Titled “The Steel River: A Remarkable Loop,” Harting’s chapter provides the following evaluation –

The Steel River offers a remarkable 170-kilometer adventure just north of Lake Superior, all in one loop, beginning and ending on Santoy Lake. In many respects, this is a superb wilderness river: remote, clear, lots of flatwater, and manageable whitewater, between 15 and 20 portages…A marvellous river indeed, but not a trip for novices without sufficient whitewater and portaging experience.

Yet another positive recommendation to clinch the deal! It was time to look more closely at all the maps available! [The archive.org website has a downloadable copy of Paddle Quest.] 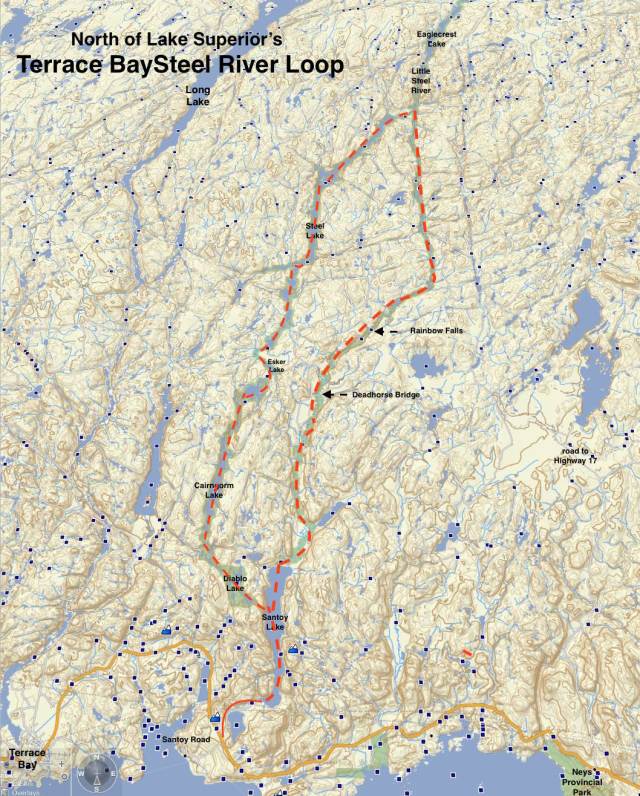 As mentioned, Rob Haslam’s maps are the obvious starting point. They are based on the Garmin Topo Canada maps and have all portages, most campsite possibilities, and the locations of the four significant logjams on the lower Steel indicated. Haslam knows the river and has done the entire loop a dozen times over the past 25 years. We would find his information totally reliable and very helpful in dealing with the challenges of the river.

The topographical maps maintained by the Canadian Federal Government’s map department still provide the most accurate map information for canoe trippers.  They are available at no cost online if you want to print them – or the parts of them that are relevant to your trip.  For the Steel River Loop, three 1:50,000 topos cover all your map needs.

David Crawshay’s Topo Canada iOS App for iPhone lets you download all of the above to your iPhone.  While leaving the iPhone on all day to use as your primary GPS device would eat up battery power like crazy, it is handy to make a quick confirmation that you are indeed where you think you are! Download Crawshay’s app here.

Toporama is NRC’s modern version of the archived topo sheets listed above.  It is essentially a seamless map of the entire country and allows you to extract from and apply to the map all sorts of additional information and features. 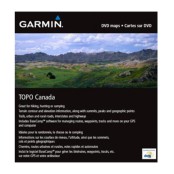 As well as paper copies of the federal govt. topos, we each have a Garmin GPS unit – the Oregon 450 and the Etrex 20 – with the latest Garmin Topo Canada v 4 maps on it.  (It is listed at an incredible $181. CDN in early 2018. We paid $110. back in 2011.) While not as accurate as the NRC maps, they serve as backup and provide a ready answer in those situations where you can’t figure out exactly where you are!  We also like the waypoint and tracking features and how the eTrex and Oregon archive each day’s progress.

If I don’t already have a GPS unit, a better option might be a device like the Garmin inReach Explorer+, which serves as a two-way communication device and also has many of the features of a GPS unit.  We were still using our Spot Connect on the Steel to provide the folks back home with GPS tracking and nightly brief email message. Since then we have upgraded to the inReach.

If you just wanted the GPS function, then your smartphone with the Crawshay Topo Canada app would do the job, as long as you could keep the battery charged! The Steel River area is off the grid, so you won’t be able to use your phone to contact anyone!

We have also uploaded the gpx file of our Steel River Loop waypoints (along with several points noted on Haslam’s maps). You can download the 66 kb .gpx (Garmin format) file as a 5 Kb zip file from my Dropbox folder here.

Needless to say, that nifty 2-D Penrose Staircase shown above cannot exist in reality!  In their trip reports, all of the above paddlers are quick to point out the one thing I haven’t mentioned yet – the price to be paid to get to that starting square for the ride down.  Known as the Diablo Portage, it is an 1100-meter carry from Santoy Lake (249 m asl )  to Diablo Lake (348 m asl) and involves a 100-meter gain in altitude. Another 10 meters of altitude gain from Diablo Lake to Cairngorm Lake via three more portages, and you are in the true headwaters of the Steel River system.  Some work will be required! 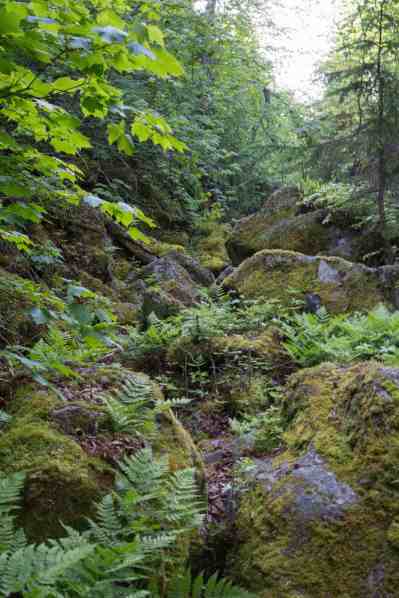 After canoeing waterways all over the world, guidebook author Cliff Jacobson says the portage between Santoy and Diabolo [sic] Lakes is tougher than any other he’s found, even in the remote reaches of Nunavut—yet this pristine paddling escape sits right off the Trans-Canada Highway. “At just under a mile—1,673 meters, to be exact—it would be doable in 20 minutes if it were relatively flat,” he says, but hauling a canoe and gear through piles of Mini Cooper-size boulders takes all day. The elevation gain is about 300 feet (with 100 feet stacked into the first 100 yards), so “progress is measured in meters, not miles, per hour.”

We repeated our canoe tripping mantra – ” we’ll git ‘er dun” – a few times as we looked at the contour lines bunching up close to each other between Santoy Lake and Diablo Lake.  We accepted it as the price of admission and embraced it as only those who don’t really know can!

Update: August 2018. A four-man Anishinaabe crew from nearby Pic River First Nation worked on the portages from Santoy Lake to the south end of Steel Lake.  This should make things easier for the next few years! See my Day  One – Diablo Portage post for more info. 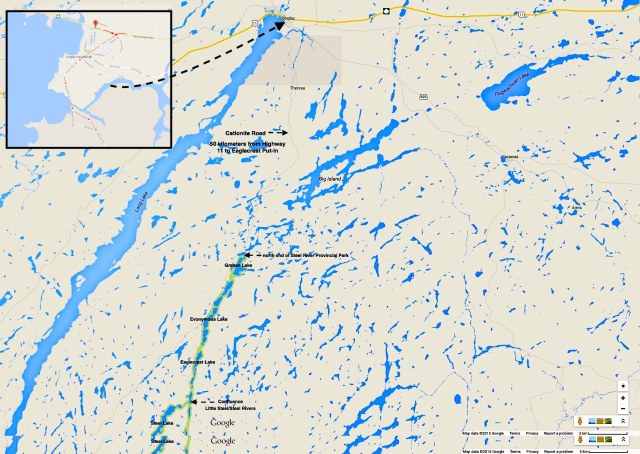 Rob Haslam describes this approach in the post referred to above.  Beginning at one of the lakes from Grehan to Eaglecrest  (Haslam gives directions on how to get to Eaglecrest), you paddle down the Little Steel River system to the point where it meets the Steel River itself.  Then it is all the way down to Santoy Lake and the Diablo Portage.

After your little tussle with the devil, it is mostly lake paddle back north to your vehicle.  Among the plusses of this approach would be the chance to get into trip shape before you hit the Diablo Portage.

Update: Early July 2022.  A caution from Brian (see the Comments section below) about the current state of the first bridge crossing on Catlonite Road:

As of early summer 2022 the alternative northern start that Haslam describes here has a problem. The first crossing of the Making Ground River on Catlonite road south of Longlac is currently closed as the bridge is apparently damaged. Two large gravel birms flank the sides and it is impassible. Could be another road to the east that reconnects further south, but not something I confirmed. I cut losses and made the drive around to Santoy. Make sure you do your homework before attempting the northern start!

On July 8, a Rob Haslam email provided this information…

the bridge is still out, but there is a work around. The Seagram road is about 8.5 k east of Longlac on the highway. It heads south and joins up with the Catlonite just past Seagram Lake. It’s not a big diversion. I’ll let you know if I hear a timeline on the bridge.

The southern approach off the Trans-Canada Highway was our choice for our Steel River loop.  While the driving distance from Toronto to Longlac is about the same as that to Santoy Lake, we liked the idea of getting the worst of the trip done first.  The ride into Santoy from the highway is also much shorter than the 50 kilometers on the Catlonite Road from Highway 11.

Given that there is no sign indicating the side road that goes to Santoy, we drove right by the turn-off and had to come back at it from Jackfish Lake.  The gravel road leads to a fair-sized parking area, a dilapidated dock and a boat launch ramp in a bay on the south shore of Santoy.

This Microsoft Bing Aerial map should make clear the ride to the Santoy Lake parking lot:

You are not yet in the park; it only begins near the far end of the Diablo Portage, about 100 meters from  Diablo Lake.  Our vehicle was the only one in the parking lot the day we arrived; a week later, there were a few more on our return. On the lake itself, there are a couple of cottages at the north end and a trailer camp on the east side.

Now to get this canoe trip on the water!  It started with an hour’s paddle up Santoy and then our “uplifting” experience on the Diablo Portage – and we got to do it in the rain.