Canoeing The French River From Top To Bottom: Day 4 – Down The Five Mile Rapids Section of the Upper French River

Previous Post:  Day 3 – From Canoe Pass To below Portage Dam 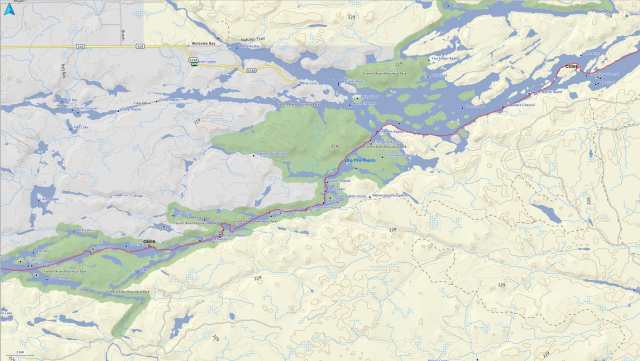 After we had retired to the tent the night before we were treated to what sounded like a rain shower – it was just the sound of bugs hitting the outside of our tent wall and ceiling. We were expecting more blackfly and mosquito action when we crawled out the next morning – but all was good.  In fact, for most of our 11 days on the river, bugs were not a problem.

We usually bring along two 10′ x 14′ MEC silnylon tarps – one to put over the tent fly for the ultimate peace of mind and the other over our dining and sitting area.  On this trip we left one tarp behind and brought our Eureka No Bug Zone shelter,  We bought it two years ago just for June canoe tripping in Missinaibi country near Chapleau.   However, on this trip, it only got put up twice and never for its intended purpose.  At the start of  Day 2, we had used it for breakfast during a brief rain shower. [The link to Eureka’s Canadian site here and the US website here.]

As we paddled downriver we stopped at CS306, just 1.5 kilometers from where we had stopped the night before.  We found a better campsite with more shelter for the tent and better water drainage. The photo below is a shot of the site from the water. As with other sites on the Upper French, it looks like it has been co-opted as a lunchtime spot by fishermen from the nearby fishing lodges of Wolseley Bay. We looked around for a “thunderbox” but did not see one. 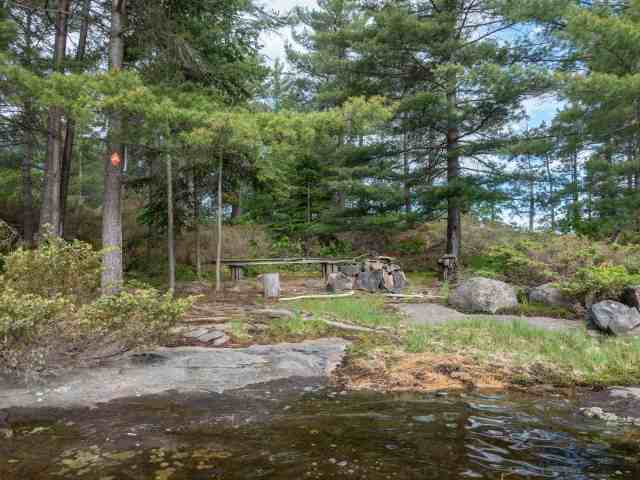 The Five Mile Rapids on the Upper French: 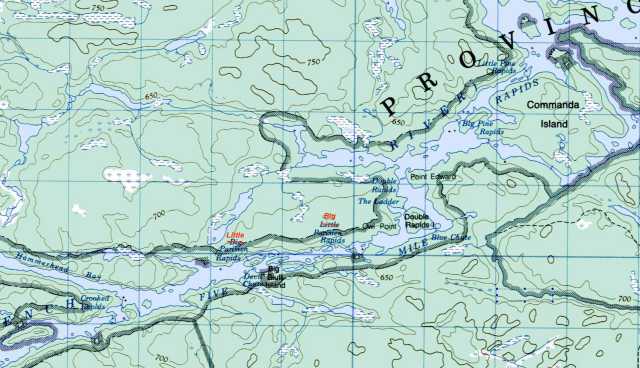 By ten o’clock we were coming up to the Five Mile Rapids section of the river. It is an eight-kilometer stretch of the river running along the south side of Eighteen Mile Island that has a few rapids, some of which require scouting and a bit of caution and perhaps a portage around.

Note: The total drop from above Little Pine Rapids (the first set) to the bottom of Crooked Rapids (the last set) is only three meters – that is, from 186 m to 183 m a.s.l. In the grand scheme of things, this is not a wild river run!  It is still fun to do!

Given that we travel alone and since we still have all our gear in two old-fashioned Duluth-style packs (115-liter volume) and two duffel bags, as opposed to those nifty 60-liter plastic blue barrels, we lean towards the caution side in our approach!

We would spend two hours on this section before stopping for lunch on the island just above the last set of rapids,  Crooked Rapids, which we dealt with after our almost two-hour break.  Mid-June 2019 water levels were about 1.5 meters higher than usual.  Our GPS device recorded speeds of up to 17 km/hr at a few points along the way!

The Friends of French River map indicates a 40-m portage on river right.  High water made it into swifts. We paddled down. 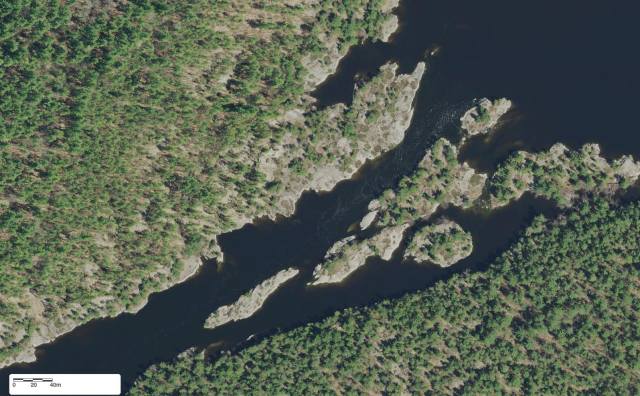 After zipping down Little Pine Rapids, the first of the rapids in the Five Mile Rapids section, we came to Big Pine Rapids. Later in the season, we may have run it but, given the unusually high early season water levels,  we figured a carry was a better option. 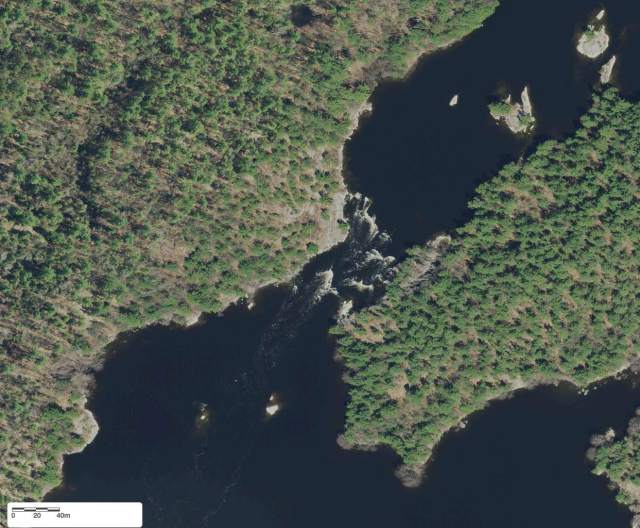 The easy 100-meter trail on river right makes use of the rock outcrop running alongside the rapids.  Twenty minutes later we pushed off at the bottom of the rapids, having stopped to take a few photos of this very scenic spot on the French. And who knows – maybe that lone tall pine in the image below is the one which prompted the name of the rapids? 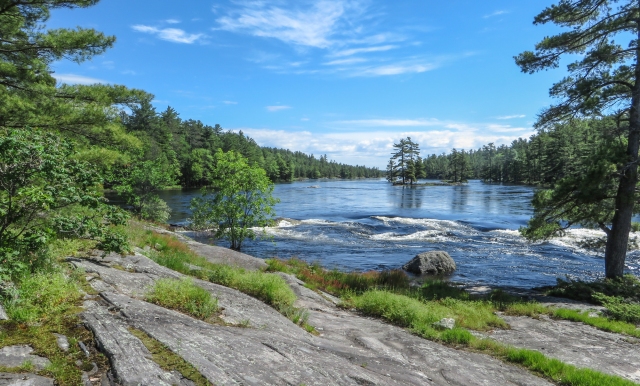 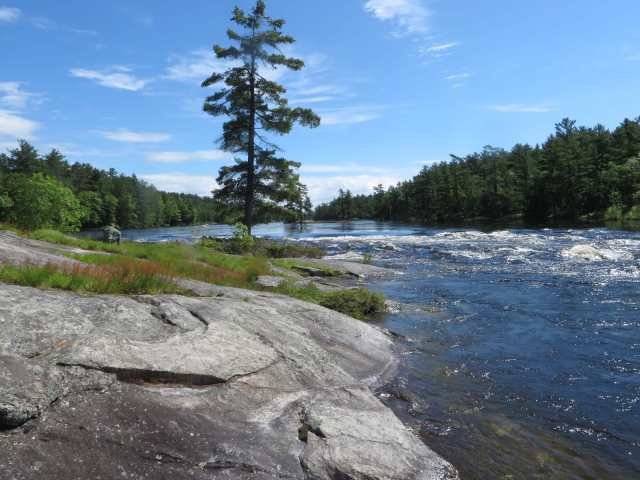 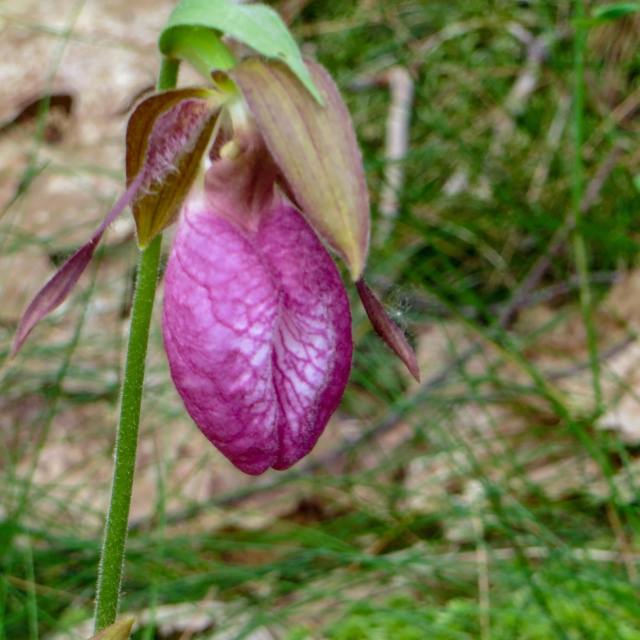 max’s flower of the day

The Friends of French River map indicates a 30-meter portage here. Higher water levels covered up whatever rapids were there. We enjoyed the 5-second zip down. 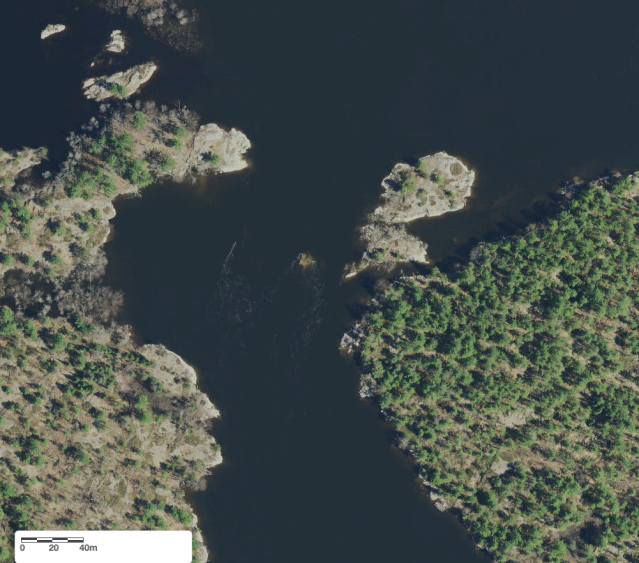 The Ladder – lined the top and ran the rest

When we came to the Ladder, we lined the top section on river right thanks to the decent footing provided by the rock outcrop and then rode the rest down to the bottom. 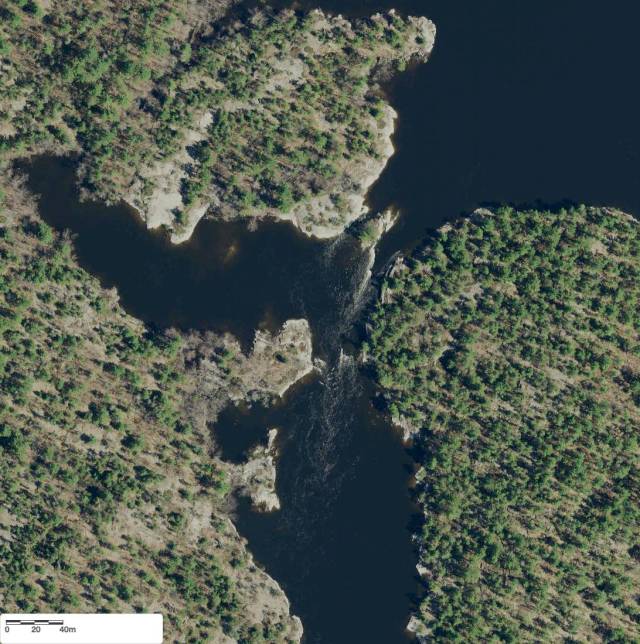 The Ladder – the Rapids just after Double Rapids

If “Big’ implies more turbulence and a bigger drop than “Little” then having the rapid’s name correct does matter!   Unfortunately, there is some confusion here.  Our Garmin topo map, for example, labels the rapids we now came to as Little Parisien Rapids!

On the other hand, the Friends of French River map has it correct – it calls it Big Parisien. So too does the more recent one at the Natural Resources Canada Toporama site.  It has Big Parisien upriver from Little Parisien. 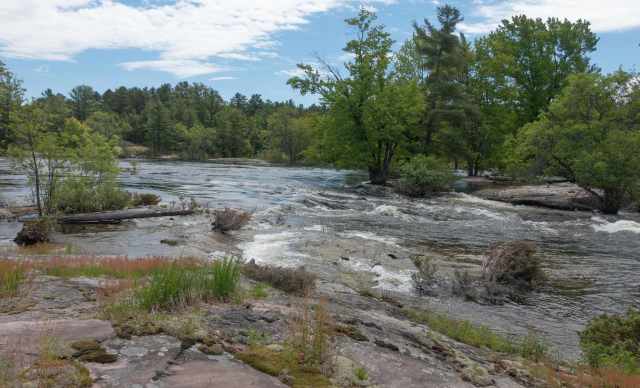 We spent about twenty minutes on the portage around Big Parisien Rapids.  The red line on the satellite image shows what we came up with as a solution – a mini-carry and line combination.   There may be an actual portage trail that we did not see – probably on river right! 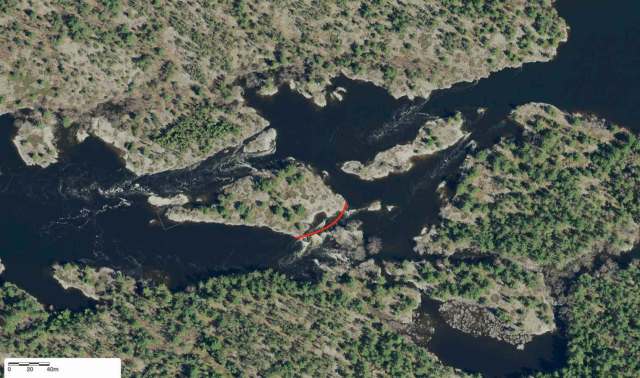 Max, going by what he was seeing on his Garmin eTrex – i.e. Big Parisien – later mentioned that he was expecting a step up in intensity as we approached what he thought was Big Parisien.  As it was,  we stuck with the right shore and zipped down the ripples of Little Parisien in 10 seconds!

Without a doubt, Big Parisien comes before Little Parisien!

We stopped soon after at a shady spot on an island just above Crooked Rapids. It was time for lunch.  This one was an uncharacteristically long one from 12:15 to 2:00!  Mostly we wanted to sit out the heat of the day instead of being out on the water in full sun. It was that hot!

Then it was on to the last of the rapids in the Five Mile Rapids section of the French River’s Main Channel.  The GPS track from Max’s eTrex 20 shows our roundabout route: 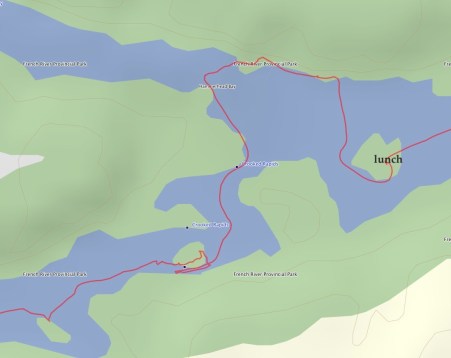 First, we paddled over to check out the vertical rock face on the off chance that four hundred years of paddlers had somehow missed the rock paintings there! Then we turned back to deal with Crooked Rapids, avoiding the main channel and opting for the narrow side channel on the left side of the small island.  A partial carry and a line job here and we were done with The Five Mile Rapid stretch of the French!  In retrospect, floating down the main channel would have made more sense! 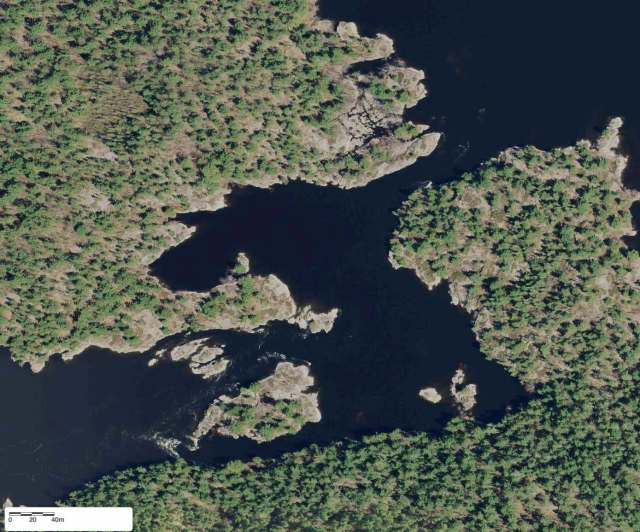 From all the images which follow it is fair to say we enjoyed the half-day we spent there.  Admittedly, the initial impression was not positive.  Below is what we paddled towards.  As we approached, we wondered where we’d find a flat spot for our four-person tent.

the view of CS419 from upriver – not too promising!

We paddled around the left-side of the island to find something much more to our liking – a gently sloping rock face that went up to a flat spot sheltered from the north wind by more vertical rock and capped with a great hilltop patio.  While we prefer our sites more sheltered and with more tree cover, this fair-weather site would do thanks to the weather we were having. 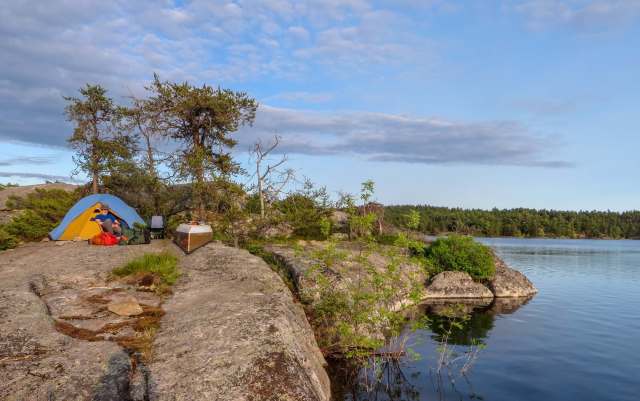 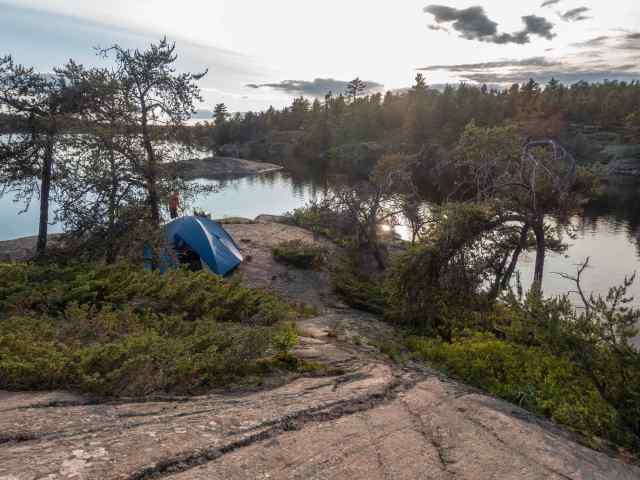 CS503 on the French – an excellent fair weather site

Dusk on our hilltop patio – and you can see our Helinox Chairs and our whisky glasses – repurposed 35mm film canisters which conveniently hold a bit over an ounce. We’re not big drinkers but every once in a while – and sometimes as a reward after an especially rough day – we’ll have an ounce or two as we watch the sun go down and point our cameras in different directions. 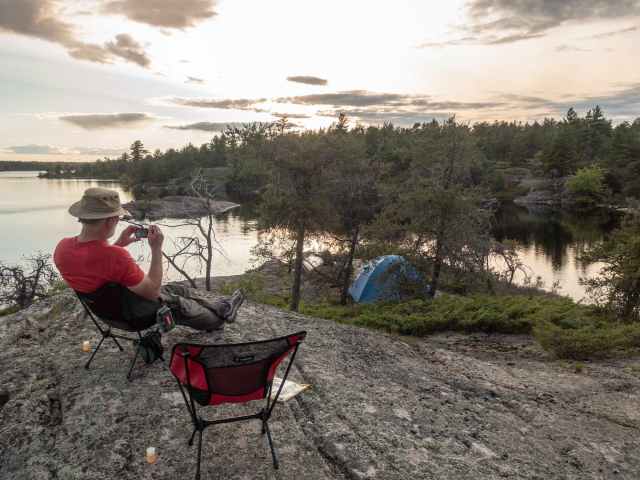 looking over French River CS503 from the hilltop patio

a view of the French River CS503 neighbourhood from the hilltop 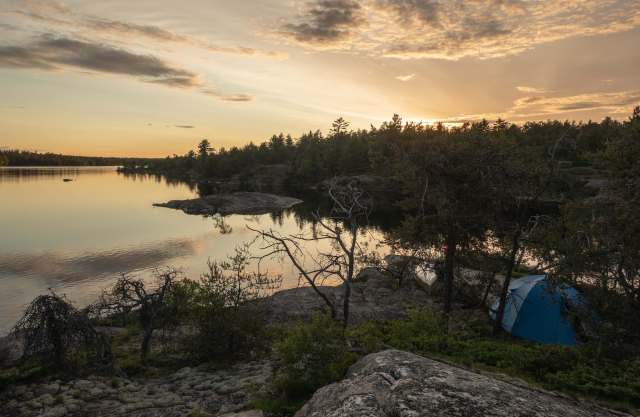 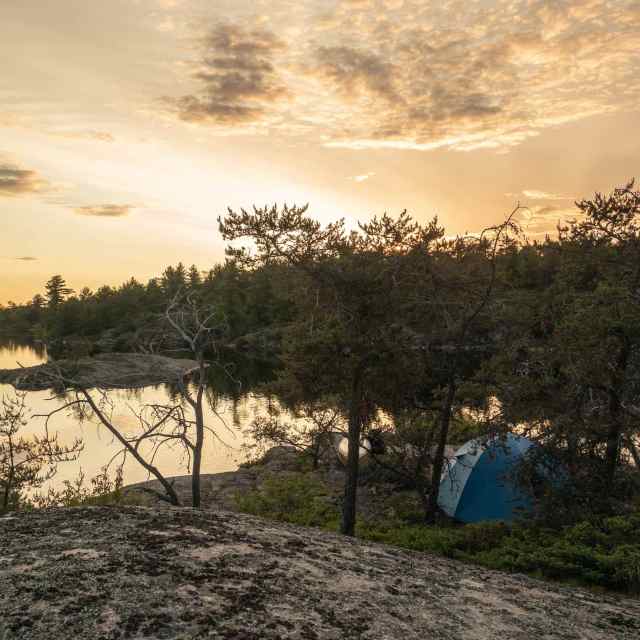