cliff face to the south of Dewdney’s Site #219

Part One in this tour of the pictographs of Wabakimi’s Cliff Lake, which is a part of the Pikitigushi River system in northwestern Ontario,  ended at a site Selwyn Dewdney labelled #219.

(Click here if you’d like to read The Pictographs of Wabakimi’s Cliff Lake – Selwyn Dewdney Takes Us On A Tour Part One first!)

Site #219 is a part of what Dewdney, our guide for this tour, considered to be the central section, in spite of the quality of the pictographs found at the south end of the lake and shown in Part One. 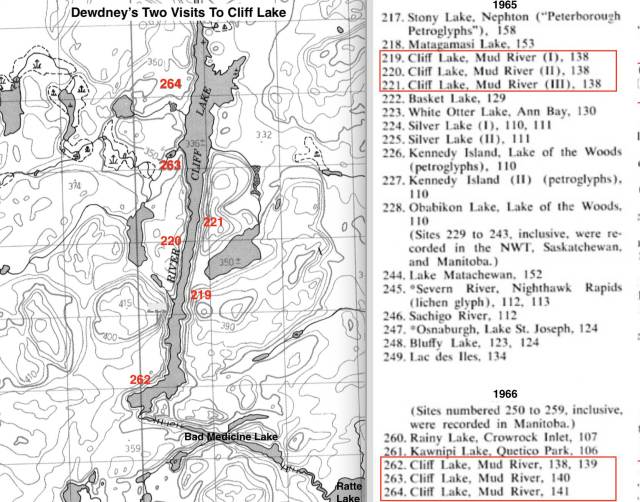 Dewdney had made two visits to the lake in the mid-1960s and included his observations in the second edition of Indian Rock Paintings of the Great Lakes, the book which established the systematic recording and study of Anishinaabe pictographs of the Canadian Shield.

See here (pp.135-141) for a downloadable pdf copy of his account of the Cliff Lake visits.

Of this main site, he writes: “By far the largest number of paintings was along the thousand feet of rock wall which, we learned, Chris and I had not thoroughly covered the year before.” Paddling up to the site,  we passed the following ochre-covered section of rock –

While many of the pictographs at the south end of the lake are easily discernible, what you see as you paddle up the lake are often just smudges of blurred ochre, as in the above image.  Here are some other examples of pictograph remnants you’ll paddle by –

ochre on rock – the remnants of a pictograph on Cliff Lake

“ …the overriding impression of the Cliff Lake setting is one of an age-hallowed place, where paintings were made at intervals over long periods of time.  More than half of them are indecipherable and many more nearly so.” 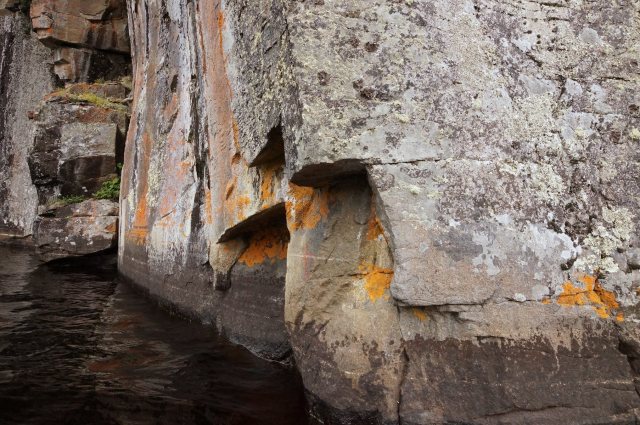 Paddling closer to the above corner of the rock face, we were rewarded with another small image – perhaps four inches long but clearly visible.

the cross image close up near site #219 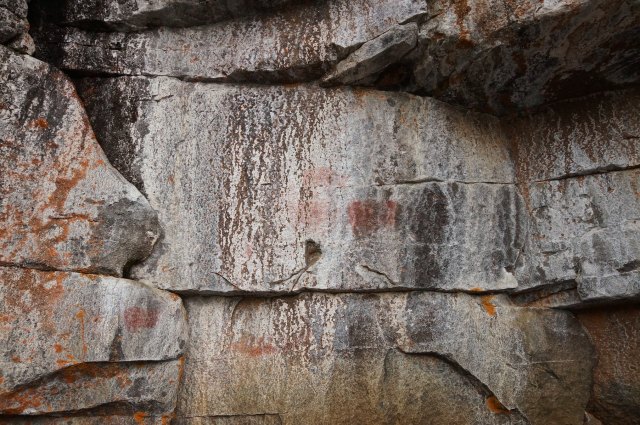 ochre smudges on the rock

Dewdney provides a couple of possible explanations for the smudgy nature of many of the pictographs. On the one hand, as indicated in the quote above, he concludes that the blurred nature of many of the pictographs is a sign of their great age. He also proposes the following explanation:  while the rock face at the south end of the lake is granite,  the rock on the east (and west) sides of the lake as you paddle north is basalt. He suggests that perhaps the ochre/fish oil bonded better to the acidic granite than to the basic basalt. 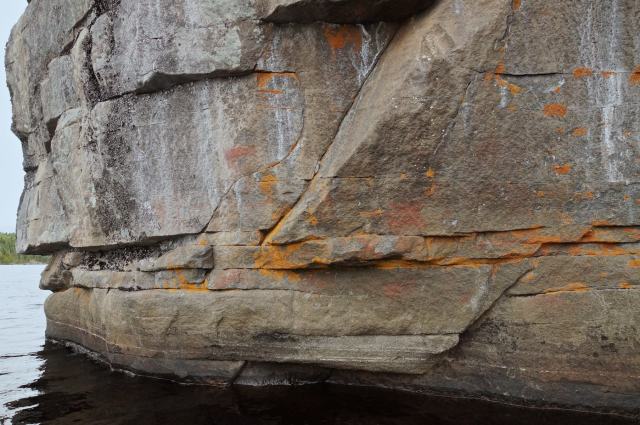 faded pictographs on the east side of Cliff Lake 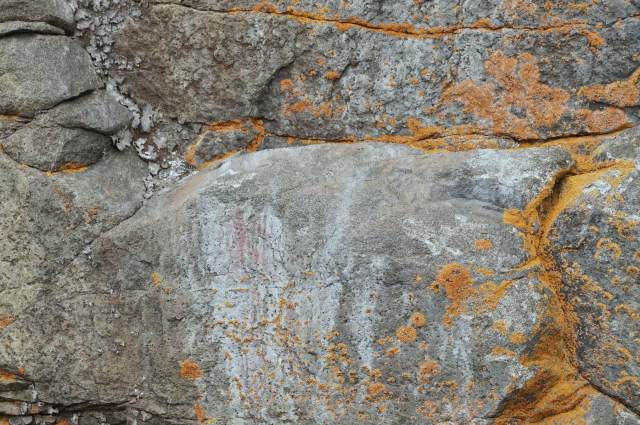 Cliff Lake – fading ochre remains – is it a human figure?

Paddling further north on the east side of the lake – up from site #219 with the large woodland caribou/moose image that  Part One ended with – we came across this section of rock face, what we thought was Dewdney’s site #221 – 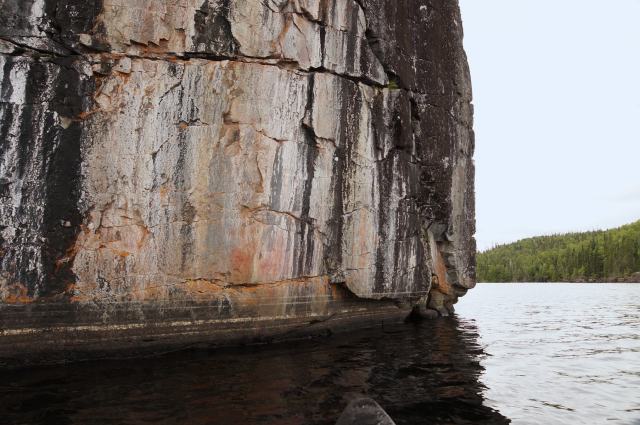 Cliff Lake’s fading pictographs – see below for a close up 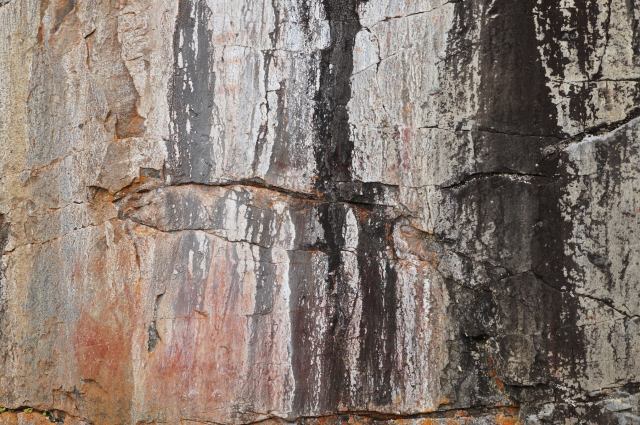 Just north of these images, we came across a small trail at the north end of the rock wall. Getting out of the canoe, we scampered up and were soon up on top of the cliffs and looking at an excellent campsite that would be worth the effort of getting the gear up there. This shot of my brother standing near the edge doesn’t really capture the sense of being up there but it will give you a rough idea!

Also,  as the above image makes clear, many sections of the lake do not have sheer vertical rock face!  However, with your tent up and your small campfire having boiled the water for your cup of filtered coffee, here is what you get to contemplate as you lean back on your camp chair at this campsite –

rock face across from the tent site on Cliff Lake

Now that we are back in the city, I am left asking myself the question – Why didn’t we spend another night on Cliff Lake?  We could have moved down from our other campsite to this one and revelled for another night in the privilege of just being there, two of maybe ten visitors the lake will see in a given year!   Looking at the cliffs in the above image, it is clear that a brief scramble from the south end and we would have been on top looking back at the campsite and at each other and saying for the umpteenth time that day – Wow!  A missed opportunity – and yet another reminder for us to slow down just a little! 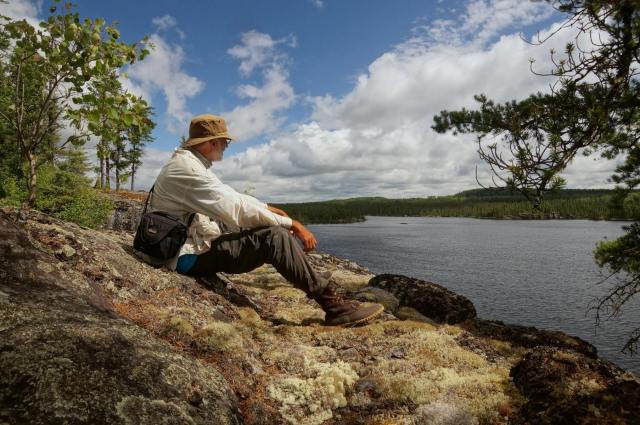 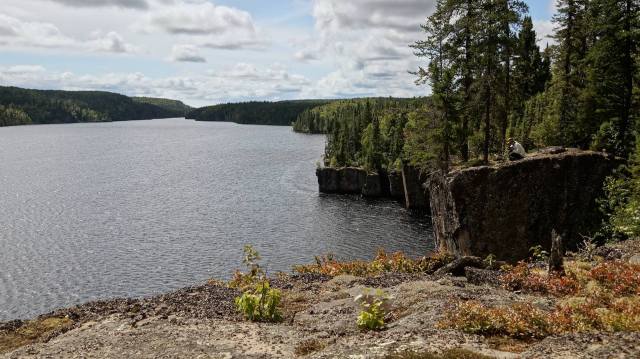 looking south from the cliffs across from our campsite

There were still more pictographs to be discovered.  Dewdney had taken the time to sketch the following panels: 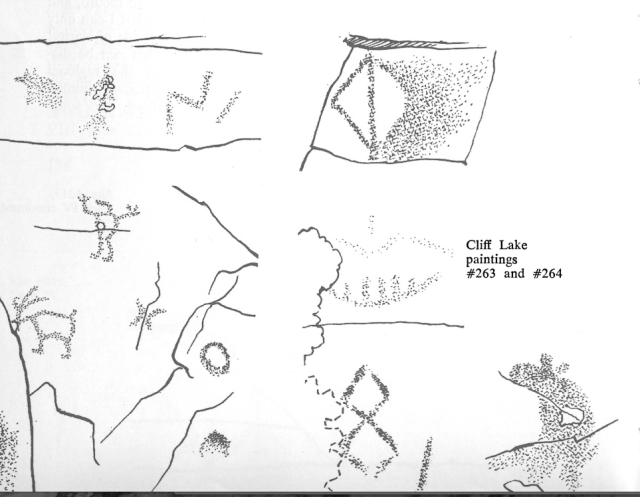 We were hoping to have found one of the faces as we paddled towards this rock.

As we got closer we saw the panel illustrated by Dewdney on the top left hand.  Here we were in 2013 and it really did not look all that different!

From the photo, it is clear that Dewdney (uncharacteristically)  left out some of the ochre marks, probably because he did not know what to make of them. The animal form on the left is followed by various abstract lines. Or perhaps the zig-zag line is what remains of a snake figure, possibly with horns if we connect the line with the two isolated ones above it.  (In Reading Rock Art  Grace Rajnovich has a section on the serpent motif  in which she includes images of horned snakes.)

Nearby was this indecipherable bit of ochre – may be a woodland caribou or moose or two?

unclear pictograph on Cliff Lake Rock face – two woodland caribou standing next to each other?

Another of the panels that we did come across was the one with what looks like the figure 8 and, at the bottom right, a smudge that only looking at Dewdney’s sketch helped me to make it into something readable. Look more closely and you’ll find other ochre markings – 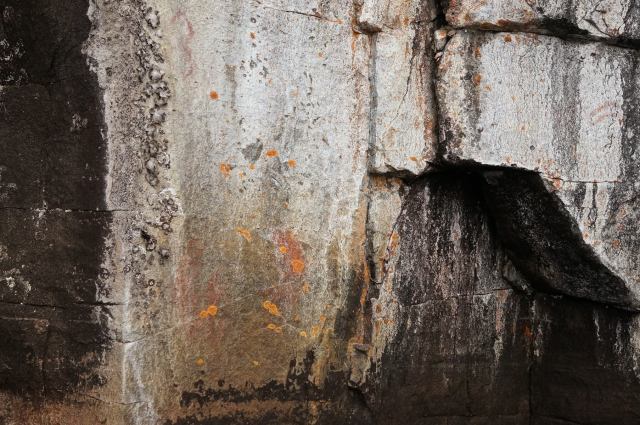 Of this face, Dewdney writes –

“The one strong painting begins with a fairly definite head, but trails off into a vagueness that fails even to achieve the distinction of being called an enigma. And the one small but pleasing design above it to the left is partly obscured by lichen.”

Not captured in the above image, but sitting on top of the geometric figure is the faint image of a canoe – 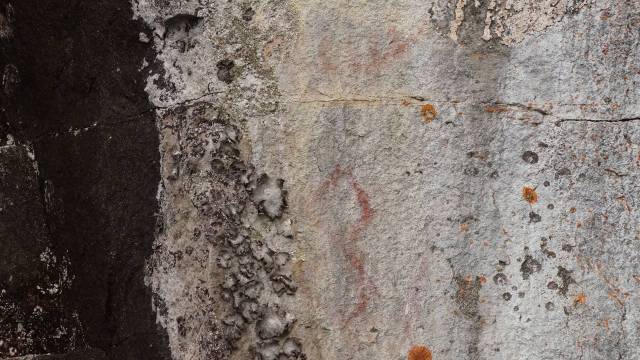 geometric figure – a double snake? – and canoe from site #264

On the west side of the lake across from our campsite, we paddled by this panel of a dozen or so ochre smudges.  Looking at Dewdney’s sketch certainly helped to bring out the images. (The hope is always that you are being programmed with the right interpretation!)

Cliff Lake’s west side – #264 – the most northerly rock face

Of this site Dewdney writes:

“The fourth site is more extensive, with four groups of paintings, on the last of which are the charming little drawings of an animal – likely, at this latitude, a woodland caribou – and a man. The man is very like two figures I found In Saskatchewan, both of which had a similar projection from the head that I took for a pipe. Here the alternative might be a bird’s bill, though I regard this as unlikely. All the rest on this site is abstract and vestigial, except for the tally marks, canoe, and stick figure reproduced from Face I.”

Zooming in a little brings us closer to the woodland caribou and the human image Dewdney refers to.

Closer still and here is what you see – 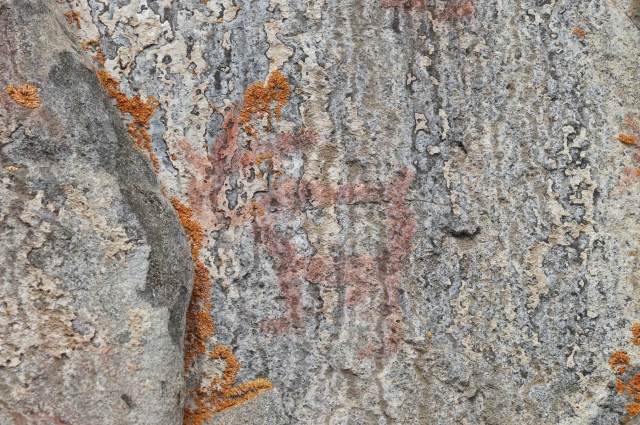 What is remarkable looking at this sketch from almost fifty years ago is how little has changed – except for the fungus, which is not a part of the sketch but which can be seen below – 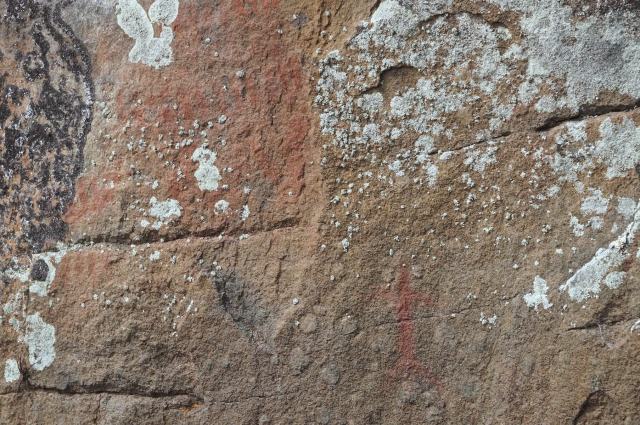 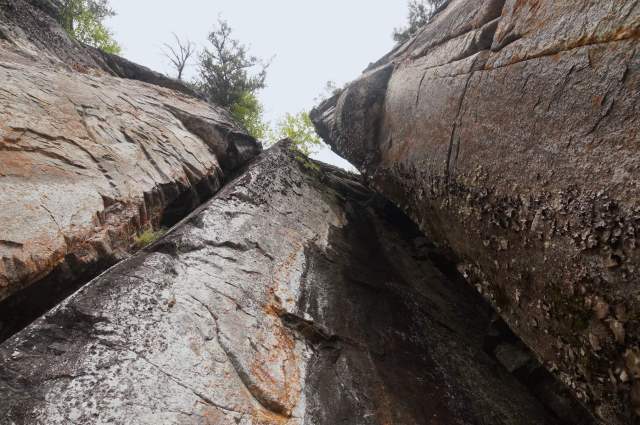 the vertical rock of Cliff Lake – “Look up, look way up…!” 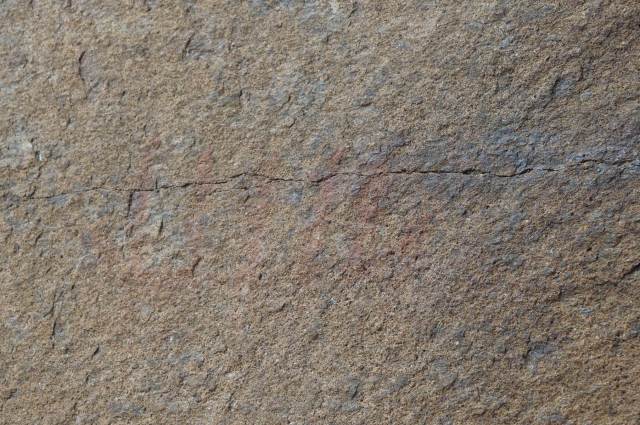 Our camp for the one night we spent on Cliff Lake was about forty meters in from this fire pit on the breezy point.  Of all the campsites of our seventeen-day paddle, it was the best.  Standing at the point you are looking at the north end of the lake where it narrows.  To the left of the fire pit is the first of the really dramatic rock face sections on the west side of the lake.

Of the campsite itself, the only other one on the lake that could have improved on it was the one down the lake a bit.  We should have stayed there a second night!  Don’t make our mistake when you visit – linger and savour!

We spent about five hours scanning the cliffs for evidence of pictographs and were definitely rewarded for our efforts as the images above attest.  On other occasions, you end up staring at the rock face and, even while not seeing any trace of ochre, you can’t help but saying -“Man, Would you look at that! That is a work of art!” The one below served as my screensaver last week!

some Cliff Lake rock  without ochre- “Don’t know much about modern art, but I know what I like!”

I have yet more pictographs which I could upload but I’m hoping I’ve made my case, which is quite simply this – Cliff Lake is a paddler’s dream lake that has to be visited.

Given the evidence on the rock faces of the lake, I’m only restating something that generations of Anishinaabe shamans (aka “medicine men”) and young men on vision quests knew to be true. Yes, there is a price to be paid to get to this special place – there are some gruelling portages, no matter which way you come –  but you will be rewarded!

A Technical Note – Sometimes posters of pictograph images are tempted to help the images out a bit by playing with contrast and saturation levels.  While this may make the pictographs “pop”, it also creates a false impression about the colour, the tone, and strength of the images.  The results in some cases are downright cringe-worthy.

I resisted the temptation and have let the images, in all their faded glory,  speak for themselves. Ultimately you just have to go to Cliff lake and let them speak to you.

Postscript: I must thank Ismo Luukkonen/Jann Kinnunen for getting in touch and providing a link to his incredible site on pictograph sites in Finland.  It makes me reconsider my rather categorical rejection of touching up the pictograph images.  Click on the following link to see what he has done – it works!

In 2014 the University of Toronto made available an online copy of the first edition of Selwyn Dewdney’s Indian Rock Paintings of the Great Lakes.

Click on the book title to access the book at the archive.org website.  However, Dewdney only got to Cliff Lake after it was published. Five years later a second edition was published with 140 more sites, Cliff Lake among them. Dewdney organized the results of his 1965 and 1966 findings into five different sites. See my map at the start of this post for approximately where they are.

Given how difficult it is to find the book, I’ve scanned the additional material found in the 2nd edition. Click here for a 7 Mb pdf file. Pages 135-141 cover the Cliff Lake pictographs.

In 2018 we paid a return visit to the Cliff Lake pictographs at the start of our trip down the Pikitigushi to Windigo Bay on Lake Nipigon and then a three-day paddle down the NW corner of the Lake to Echo Rock and the site of the Hudson Bay Co. post named Nipigon House.