This upload is mostly an expansion of the map section from my introductory post on Trekking Bolivia’s Cordillera Real – Maps, Basic Info, and Planning Advice. It only deals with the maps available for trekkers keen on an independent walk down the Cordillera Real from Sorata to Huayna Potosi and beyond.  See the intro post for more on the best time to go, reputable trekking/climbing agencies, and acclimatization suggestions.  It is worth reading for the many comments at the end of the post from fellow trekkers who have done the route.

The Classic East Side Route 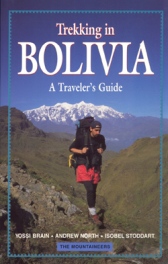 Trekking In Bolivia: A Traveler’s Guide, released in 1997, was perhaps the first book in English to provide a comprehensive introduction to Bolivia’s trekking possibilities. With Brain, as well as Andrew North, and Isobel Stoddart as the authors,  it was published by The Mountaineers.

The route that they describe is what I will call the “classic” one. It begins in Sorata at the north end of the Cordillera Real and then heads to the east side of the mountain range for seven or eight days before cutting across to the west side near Condoriri and then continuing on down to Botijlaca on the north side of Huayna Potosi.  Most trekking agencies in La Paz still offer this trek – or sections of it – to prospective trekkers.

Another book, The Andes: 28 Treks and Climbing Peaks, written by Val Pitkethly and Kate Harper and published in 2009, describes a version of this mostly east-side of the Cordillera trek.  Since Google Books has a copy of their book online, you can read what they have to say here. (Just go back to page 94 for the start of their six-page treatment.)

Here is the map from The Andes: 28 Treks. It starts in Sorata unlike the one above.

(The book is, by the way, an incredible goldmine of South America trek possibilities  if you’re looking for inspiration!)

Wikiloc, a route-sharing app, has a couple of versions of the classic route available.  Click on the map image to access the one uploaded by isards de la Cerdanya in April 2011.

A more recent Wikiloc upload of the same classic route as done by Moebius1 in July 2014 and can be accessed here.

I used the Wikiloc app for three weeks of hiking in the Bariloche area and found it to be a worthwhile investment. See here for more info on ios or android versions.

The New West Side Route:

Why A New Route?

Instead of the traditional first eight days of the classic route which goes north and east from Sorata, this one heads southeast from Sorata to Millipaya and Alto Llojena and then on to Lago San Francisco.  Doing so avoids the mining roads and the potential for trouble in the sometimes boisterous mining communities on the east side.

our Cordillera Real Trek Route – the west side alternative

This is the route we did. Often the “trail” is no more than shepherds’ paths and llama tracks up and down and across valleys; just as often we were relying on our guide’s experience (he has done the route several times) and the GPS track on his Garmin device. To restate the obvious, this is not at all like walking the Huayhuash Circuit trail or along the Inca Trail or the trails in Torres Del Paine Park.

KML/GPS Track of Our Route:

Here is the track created by my Spot Connect with its once-every-ten-minutes location when it was working as it should.  It recorded 449 individual GPS waypoints during the two-week trek.   On occasion (see the map below) it missed recording a location for an hour or more so it is less than perfect! 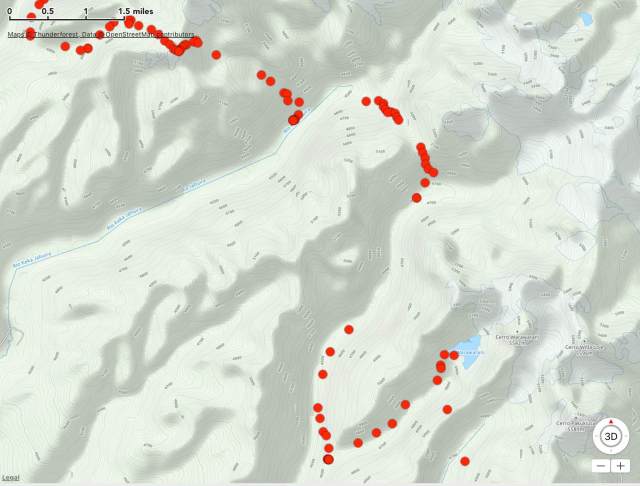 If you have a better track and would not mind sharing, please email me!  I’d be happy to post a link to it here for the benefit of future trekkers keen on experiencing what you and I did!

You can download the route from my Dropbox folder  –

The kml file will open in Google Earth and will provide incredible 3D views of the terrain you will be traversing;  I opened the GPS file in my GPX Viewer app (available in both ios and android versions).  The two images above are from the app, which I set in Outdoors view.

Note: comments from Felix and other trekkers who used my file will provide excellent feedback on how reliable the track is.  Read through the comments at the end of this post –  Trekking Bolivia’s Cordillera Real – Maps, Basic Info, and Planning Advice

1. A New Map of The Cordillera Real De Los Andes

I found a copy of the Liam O’Brien map in a La Paz bookstore called The Spitting Llamaat Linares 947. Titled  A New Map of The Cordillera Real De Los Andes, the map is a 2009 reprint of the original from 1995.  The scale is 1:135,000.  It is unclear if any changes were made in the reprint; the glacier limits shown on the map are based on Landsat images from 1989 and 1992 and are thus about twenty-five years old.

One thing the map definitely illustrates is the confusing state of transcribing Aymara names into English.  For example, the massif referred to as Chearuku or Chiaroco on other maps appears as Ch’iyaruq’u on the O’Brien map.  Ancohuma becomes Janq’uma. It will probably take a few more years before a uniform English spelling of the various peaks and valleys of the Cordillera develops. Using Spanish language rules to transcribe Aymara sounds into English seems a bit silly.  Until the dust settles, Google a different spelling and you often get a different set of websites!

Another map set is that published in the late 1990s by NIMA (National Imagery and Mapping Agency),  a U.S. Govt agency and a branch of the Defence Dept. 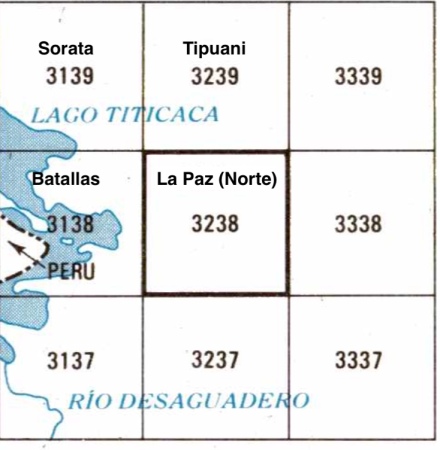 The 1:100,000 maps which cover the Sorata to Illimani stretch of the Cordillera Real can be downloaded below –

You can purchase the above maps at $20. U.S. a sheet from Omnimap.com, a North Carolina, U.S.A. business that has been selling maps since 1982.  Or – you can do what I did and download them from the University of Texas’ online map library and print off the parts you need yourself or just upload them to your iPad for paper-free use.

One more map possibility:  There is a 1:50,000 German Alpine Club map – click on the title for the information – TREKKING MAP – CORDILLERA REAL NORTH / ILLAMPU (BOLIVIA) | ALPENVEREIN. It covers a very small area, as the image below shows. It may be more appropriate for those planning a summit of Illampu than for those planning a 120-km walk down the cordillera’s east or west flank.

There is a second map that covers the area of the Cordillera around Illimani.

The two maps were published in 1987 and would be the oldest of all the maps mentioned here.

You can find a copy of the map at The Maps Company. See here for their list of Andes maps.

My series of posts on each day of our trek also has maps, elevation charts, satellite images, and photos which would be of help in finding your way down the Cordillera without too much drama!

We began our trek, not in Sorata (2700 m) but off the highway (3900 m) about fifteen kilometers south of the town.  Starting from Sorata would add an extra day or two to the trek.