Note the start of the day’s walk – a stretch of fairly flat trail along the shore of Juri Khota. We would have to gain some altitude to get up to the small glacial lake above Juri Khota and then even more as we walked to the col which would be the day’s high point before we headed down to Chiar Khota. [Chiar or ch’iyara is the Aymara word for “black”.]

We were hoping the sky would be clear so we could get a good view of Condoriri and maybe even make out the supposed “condor in flight” pose created by the three peaks. We also had another potential trekking peak we could take on – Pico Austria just to the south of the col. Our guide left the potential summit up to us individually.  We would decide when we got close to the last 300-meter section to the top.

I did have the Mountain Kingdoms brochure with me and it sounded do-able.

Depending on time and conditions, it may be possible to deviate from the pass at the col and ascend Pico Austria (5,396m/17,698ft).   An easy path zigzags its way up this rocky mountain to its summit, from which the views north encompass most of the mountains you have passed on your journey to date. The path is distinct because it is often used by climbers who are looking to acclimatize before tackling the popular climbing peaks in the Condoriri group.

The satellite image above shows our route along the west side of Juri Khota. (The first part of the marked route has us walking on water! Since the Spot Connect GPS device only records a location every ten minutes, it gives you an idea of how much distance we covered in that time period. I really should have brought my Garmin Oregon with its second-by-second tracking capability!  I didn’t because while the Spot runs for 100 hours on two AA batteries, the Oregon lasts maybe 16 hours. The much greater accuracy has a price!)

looking southwest down Juri Khota and our previous night’s campsite

the glacial lake above Juri Khota 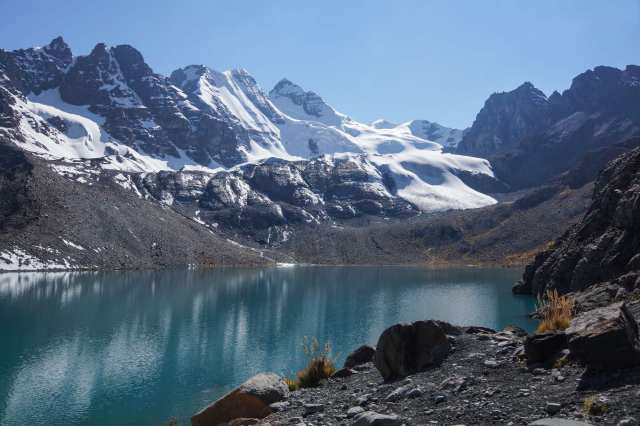 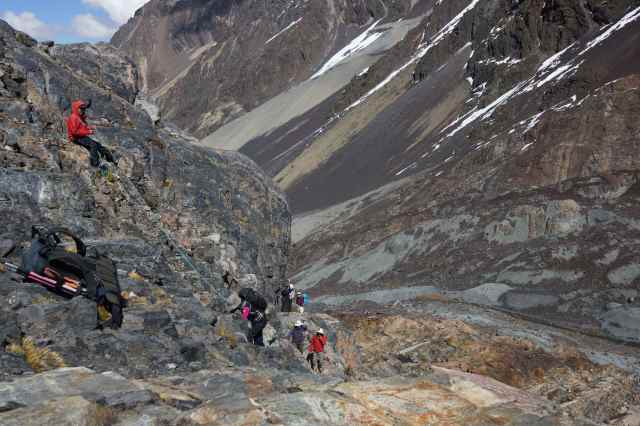 Leaving the glacial lake behind we made our way up.  Javier, our Andean Summits guide, was taking no chances on an exposed part of the trail.  He positioned himself with a rope above the worrisome part that required some class 4 hands-on-rock. We each took our turn on the rope as we walked through and up; the half-hour we spent on this came and went with no drama!  Then it was up higher on a usually visible trail that took us towards the col.

break time above the glacial lake

Finally – decision time!  Stay down at the col and wait for the others to summit Pico Austria and return or head on up for what could be some awesome views.  In the end, except for one of us, it was all in.

(One person was feeling weak from a bout of diarrhea that had hit a few of us at some time during the trip. I had mine on the very first day of the trip; the green leaf salad I had at what seemed like a safe La Paz restaurant just before I first met the group  is my best guess as to the cause.) 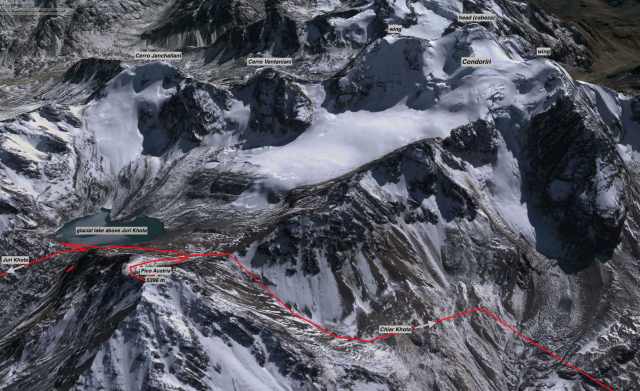 It took us about an hour to get to the top.

looking down from  Pico Austria at the path to the col

Before you get to the official summit, you walk along a stretch of the ridge.  At the beginning of this stretch is the metal plaque you can see affixed to the rocks in the photo below.  I am not sure what the story is – if I got the story right,  a trekker in his mid-sixties (my age exactly!) had a heart attack near this spot.  Those who knew him or trekked with him obviously felt that the plaque was the right way to recognize him.

I wonder if this is the most appropriate way to honor him?   But then – I also wonder why the peak is named Pico Austria?  Here we are in the Aymara heartland and we have a Pico Austria?  If you know the story let me know via the comment section below! 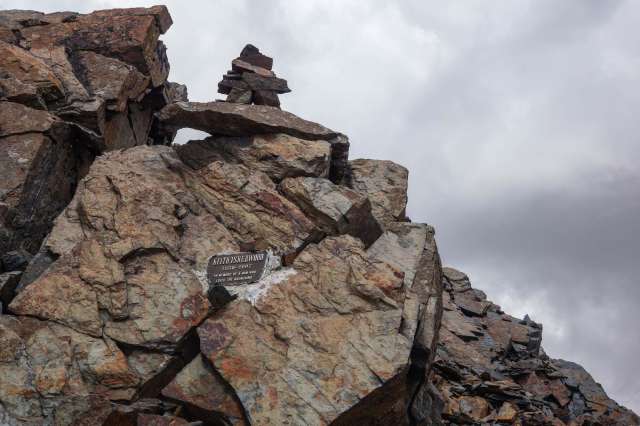 climber’s memorial (Keith Isherwood) near the top of Pico Austria

Looking south from the ridge you get an incredible view of Juri Khota and the trail you took to get up here from the previous night’s campsite.  Look around to the east and you can already see some of Chiar Khota and the next campsite.  Look straight into the Cordillera and on a clear day, you can see the heart of Condoriri, the three peaks which together are said to make up the head (the Cabeza) and the two stretched-out wings (Alas)  of the Condor. We would not be so lucky!  Cloud cover hid the Cabeza and the Ala Derecha so we never did get to see the great Condor stretched out in front of us. 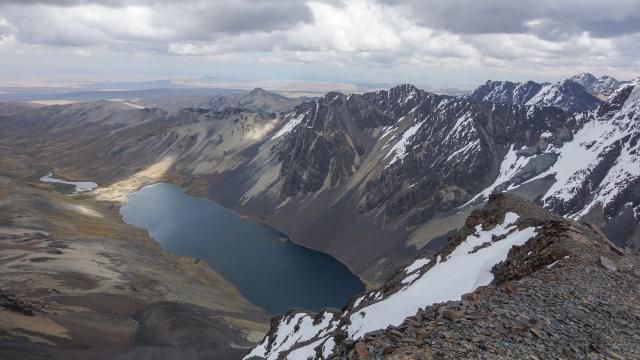 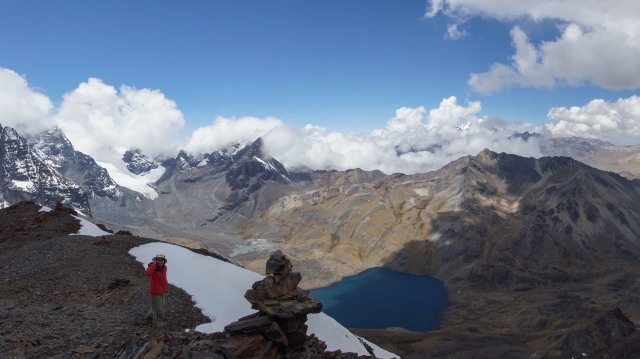 a view of Chiar Khota from Pico Austria 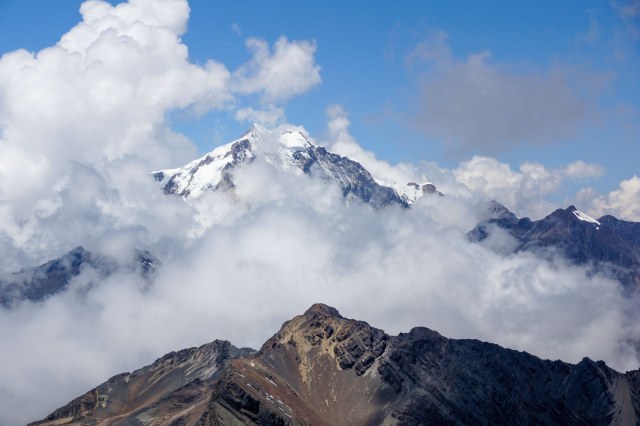 I’ll admit that while our guide Javier was talking about the supposed condor shape in front of us, I had no idea of what I was looking for.  It was only after I returned home and did a bit of research that it became obvious.  And now, of course, that my brain has been trained to see “condor with out-stretched wings” when I see that particular peak formation, I’ll have no problem identifying the condor on my next visit!

our trekking team atop Pico Austria – with me taking the photo

the Condoriri Massif – the left wing (ala isquierda) of the Condor

And then it was a quick descent back to the col and on down to our campsite of the day on the north shore of Chiar Khota. 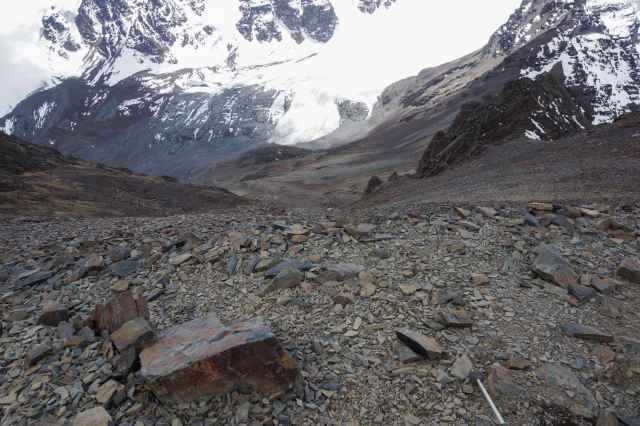 heading back down to the col from Pico Austria

the pathway down to Chiar Khota

the path down from the Condoriri col – the first section

The photo above shows the first section of downhill from the col to Chiar Khota. The shot below was taken when we were much further down; you can see the part of the trail shown in the above photo and the much steeper part that followed.  Down at the bottom is another cairn.

a look back at Pico Austria, the col, and the path down to Chiar Khota – Tony’s photo

We had a short break when we neared the bottom of the slope and everyone reached into their bags for stuff to munch on. Watching us nearby with great interest were a couple of mountain caracaras.  We had seen them throughout our trek. These caracaras behaved as if they were used to trekkers stopping and sharing food with them.  We did not disappoint them!

caracara watching us eat lunch -and waiting for his!   – Tony’s photo

the path to Chiar Khota and our campsite

We arrived shortly after the donkeys and llamas did; I remember getting my tent up and then crawling inside and having an immediate short nap.  I was feeling the effects of 600 meters of altitude gain and then the same amount of drop to the door of my tent.  I crawled out a bit over an hour later and went off to the dining tent for a cup of tea and some biscuits.

Next Post: Day 13 – Chiar Khota To Campsite 2 km. Above Botijlaca

This entry was posted in hiking/trekking. Bookmark the permalink.