Related Post: Kathmandu’s Durbar Square After the 2015 Earthquakes – Is It Worth The $10.U.S. Entry Fee?

How has Bhaktapur coped since the Earthquakes of 2015?

A few months ago I uploaded this post – Nepal’s Kathmandu Valley: The Temples of Bhaktapur – with images of Bhaktapur’s Durbar Square and Taumadhi Tol from the years before and just after the Gorkha Earthquakes of April 2015. The post also provided some historical context and imagery that I won’t repeat here!

Instead, I’ll focus on what I found on my third visit (May 2018) to the town on the east side of the Kathmandu Valley.  Unlike Kathmandu’s Durbar Square, which suffered greater damage and where little rebuilding has taken place, Bhaktapur is in better shape.  Only Potters’ Square is still a mess.  Its Durbar Square is also more pedestrian-friendly, a real treat after dodging the relentless waves of motorcycles in Kathmandu.

A visit to the main Bhaktapur sites – Durbar Square, Taumadhi Tol, Potters’ Square, and Tachapal Tol –  will cost 15,000 NRP (that is about $15. US!) for those visitors who are not from SAARC countries or from China.  They get to pay 5000 NRP.

Since I was spending two nights at the Peacock Guesthouse at Tachapal Tol in the eastern part of the town,  I got the “free” extension to my visitor’s ticket which made the cost seem more reasonable.   Spending my last two days away from the traffic and big city feel of Kathmandu for the quieter charms of Bhadgaon (as the city is called by its inhabitants) turned out to be a good decision.

A visit to Bhaktapur will usually begin at the ticket office near the entrance gate on the west side of Durbar Square.  On the map below it is on the upper left-hand side.

Before entering the square, I first treated myself to a cup of coffee at the 4th. floor rooftop café of a building on the edge of the square. It was about 8:00 a.m. and not at all busy yet.

a view of Bhaktapur’s Durbar Square from the west

visiting Buddhist monks on the morning food round

Then it was down to the entrance gate and the west end of the square.  As you walk in, the Royal Palace is on the left (north). On the south side of the square are a couple of restaurants, including the one from whose patio I snapped the shot of Gopi Nath Temple below.

I went over to see the two superb stone sculptures near the entrance. They are of Ugrachandi and Bhairab and date back to the rule of Bhupatindra Malla, whose own statue is on the stone column in front of the Sun Dhoka in the middle of Durbar Square. It was also during his reign that the Palace of the Fifty-Windows and the Nyatapola in nearby Taumadhi Tol were built.

Ugrachandi statue at the west end of Bhaktapur’s Durbar Square

Walking up the brick base of the Gopi Nath Temple, I looked down the square. In front of the temple is a Garuda figure on a stone column. Also visible is the bamboo scaffolding by one of the three temples that collapsed in the 2015 Quakes.

the column in front of Gopi Nath Temple (aka Jagannath)

While not a lot of buildings collapsed completely, a number did suffer structural damage. Cracked or buckling walls were in evidence, as were the wood beams set up to bolster them. As I walked by the poles set up on the side of the National Art Museum (once a wing of the Royal Palace)  I thought -“You really think these are making a difference?”

looking to the east end of Bhaktapur’s Durbar Square

Unfortunately, the Museum was not open on the two days I was in the city. It is apparently worth the extra 100 NRP admission.  Maybe next time! 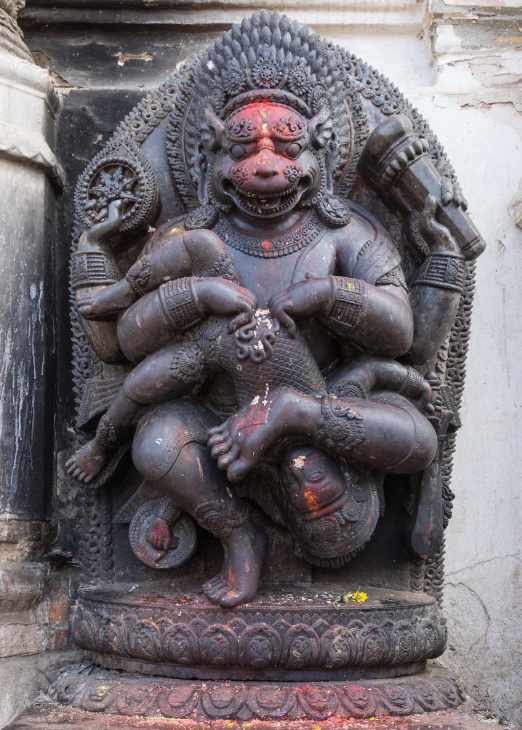 Heartening to see on a wall on the square was this poster about a sterilization and anti-rabies vaccine campaign for street dogs in the city.  I saw fewer dogs than in Kathmandu and the ones I did see seemed in good shape, including the dog below!

The Golden Gate (aka Sun Dhoka) is considered to be the finest single artistic creation in the Kathmandu Valley. I took a few more pix and then stepped inside, past the wooden wall buttresses and past the salvaged stonework in the courtyard.  Damage inside the Royal Palace compound, as well as  “no photography” and  “only Hindus” rules, meant I exited soon after entering! 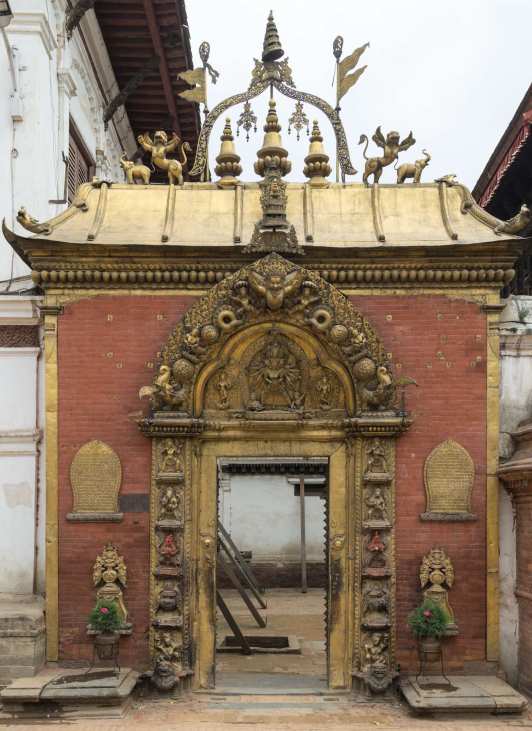 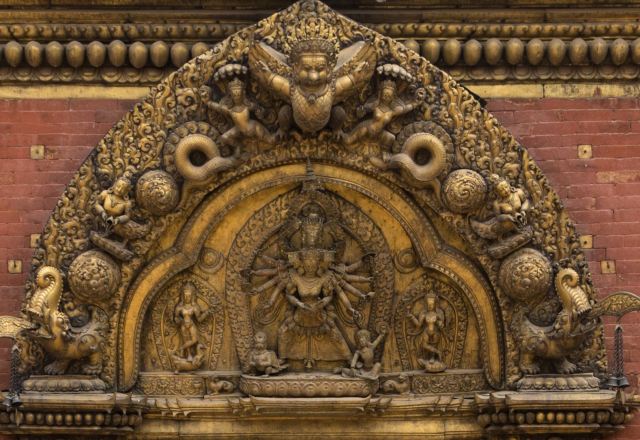 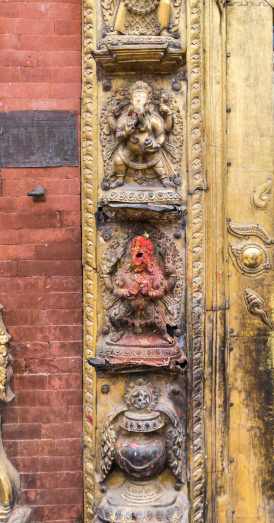 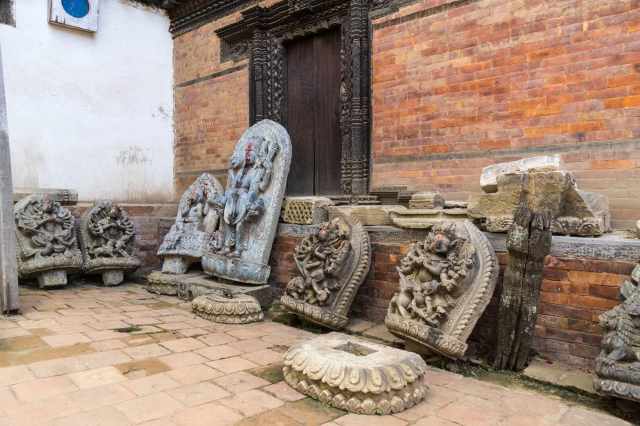 Facing the Golden Gate is the  Bhupatindra Malla column.  After three visits over a twenty year period, I finally thought to take a shot of the top of the column!

the top of the Bhupatindra Malla column in Bhaktapur

Next to the column and the Taleju Bell is the Vastala Temple. It collapsed in 2015 and is in the process of being rebuilt.  The prominent use of bamboo poles perhaps indicates the use of traditional methods of construction! 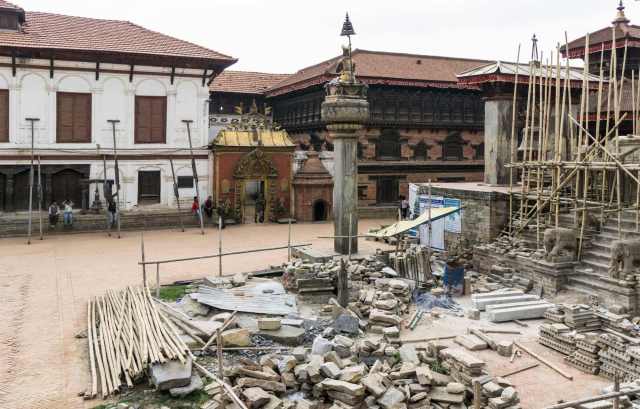 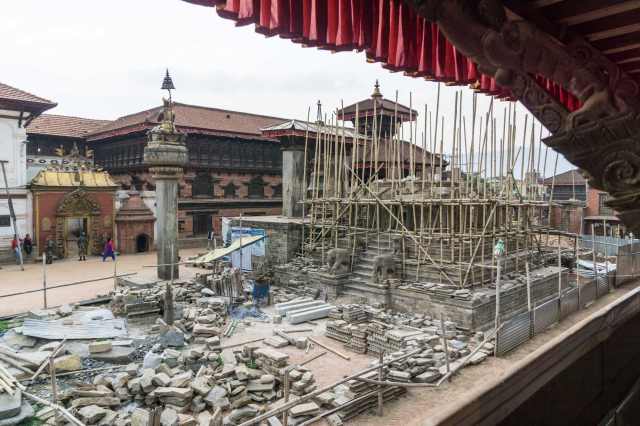 Just east of the Golden Gate on the north side of the square is the Palace of The Fifty-Five Windows. In the image below it is in the background, with the  Chyaslin Pavilion in front of it.

Chyaslin Pavilion and the Palace with some of the 55 Windows! 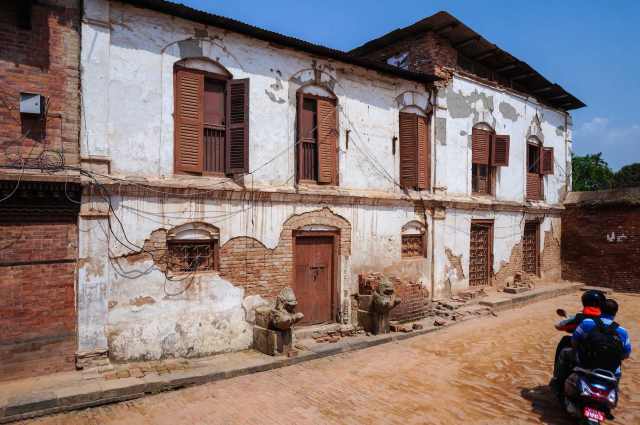 At the east end of the square, just beyond the Chyaslin Pavilion, are two temples which collapsed in 2015, leaving only their multi-levelled brick plinths, and even they were somewhat damaged.  Both are now being reconstructed.  In the case of the Fasidega Mandir, it may even turn out to be an improvement! 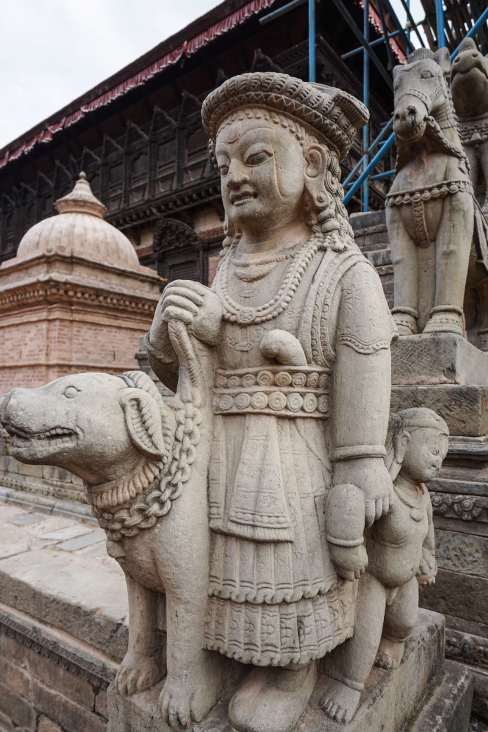 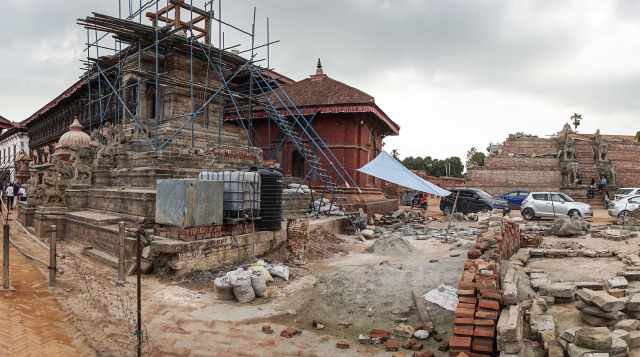 The temple on top of the Fasidega plinth collapsed in the 2015 Quakes. A new temple in shikhara-style will apparently replace the unloved white dome-like structure.  Other than having cleared away the debris, there was no sign of rebuilding in May 2018. 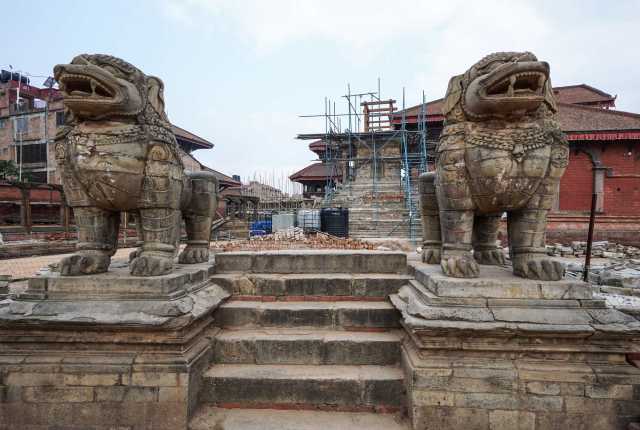 Stone Lions at the east end of Bhaktapur’s Durbar Square

I walked back into the square and walked south, past the Shiva Guesthouse where my wife and I had stayed in 1996 on our first visit.  From our room, we could look down on the square and the Vatsala Durga Temple, the very temple that had figured prominently in the 1993 Bernardo Bertolucci movie Little Buddha.  Apparently cast members, including Keanu Reeves, had stayed in the guesthouse during the filming.

Just south of the  Vatsala Durga Temple ruins is the Pashupatinath Mandir, which escaped the quakes with little damage. I turned around and went into the Shiva Guesthouse restaurant for a bite to eat before continuing my ramble through the various squares of the town.  Coming from two days in Kathmandu, I felt like I was decompressing, thanks to the quiet and relative absence of advertising and motorcycle traffic. 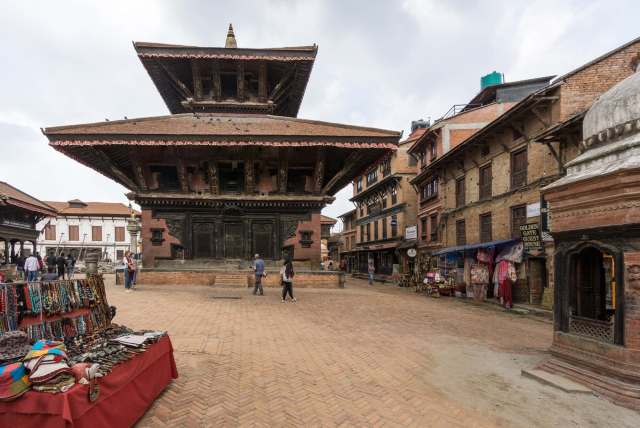 looking north towards the Pashupatinath Mandir and the Shiva Guesthouse

My coffee break over, I walked past the two destroyed temples at the east end of the square and down the street connecting it with Taumadhi Tol.  I was hoping to see the Nyatapola Temple, the tallest in the valley, still standing!

The Kathmandu Valley And Its UNESCO Cultural Heritage Sites