Temagami’s Lady Evelyn River From Top to Bottom: Day 8 – From Bridal Veil Falls To The Bottom of The South Channel

Thanks to our campsite close to the smaller side falls,  we were invigorated by the energized air – the negative ions – being created. We inhaled deeply and figured this would be a great spot for a yoga session.   I’ll admit though that  I had put in the earplugs to deaden the sound somewhat when I crawled into my sleeping bag.

There had been a bit of rain overnight but things were clear when we got up this morning. The first part of the portage – from the take-out spot to the campsite – had mostly been on a flat woodland trail.  From the campsite to the put-in at the bottom, the trail becomes more difficult. Wet moss and lichen on the sloped rockface do not make for a solid footing!  A couple of slips while carrying a pack and duffel and then the canoe down to the end resulted in a left quad strain and my right knee not just bashed but gashed. 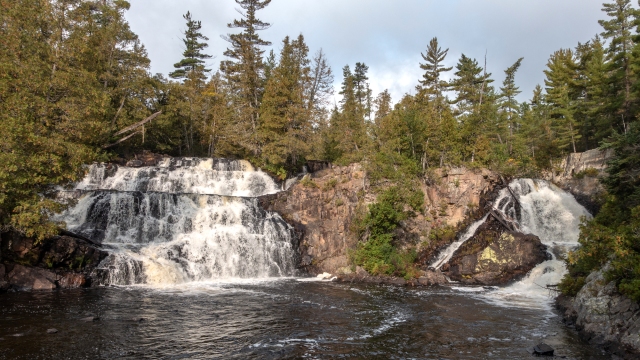 Bridal Veil Falls from the put-in below

Once down at the bottom we got some great views of the entire falls – the main falls to the left and the side falls next to which the campsite is located. 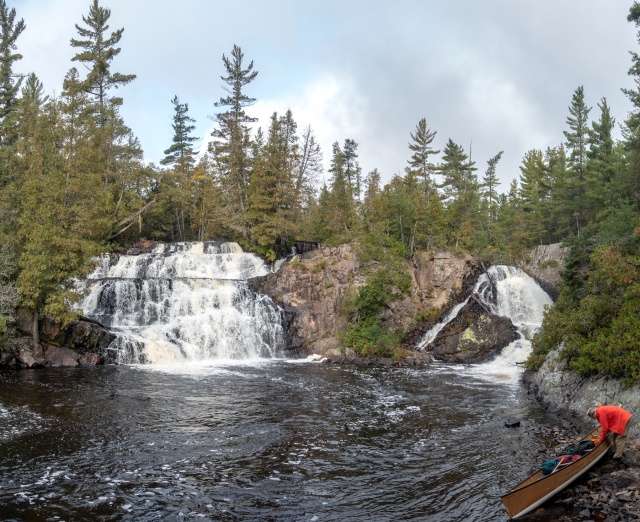 Just below the put-in, we paddled past the gravel deposit as the river bends to the south, the deposit a reminder of the not-too-distant glacier past of 10,000  to 12,000 years ago. It would take thousands of years more before enough soil was formed to support the vegetation which would draw the animals which would draw the mid-to-late-Archaic Period (8000 B.C.E. – 1000 B.C.E.) hunter/gatherers up to what must have been until then barren grounds. Still in the future was the arrival of a Woodlands culture like the Algonquin or the Ojibwe, two Indigenous peoples belonging to the Anishinaabe language family.

We look at our canoe trips in a number of different ways. The overriding one focusses on the sheer good fortune we have to be able to be out there – fit enough, rich enough, commitment-free enough, skilled (just) enough to be able to make our way down and across beautiful slices of the Canadian Shield that few get to experience. Every day is a “wow” as we paddle into new vistas. To some,  it may all seem like the same photo but to us, it is always special.

On the opposite end of the scale,  there is another view we take, a more practical one. We see each day on the water as a series of problems we need to solve.  They range from easy to difficult and we know that we have probably faced something very similar on a previous trip and were able to figure it out. 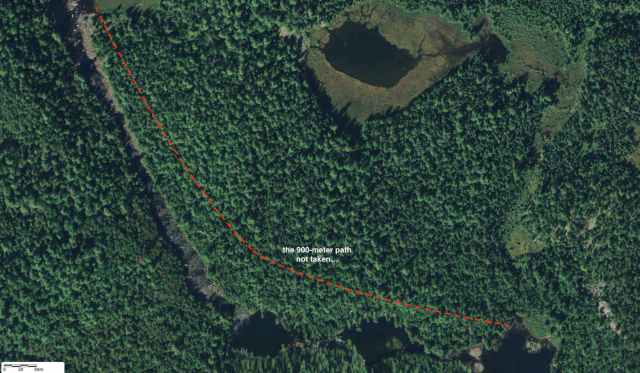 The biggest problems usually involve rapids or portages, though sometimes the weather – temperature, wind, rain, and lightning  – create problems too. With respect to “problems”, we try to gather as much info as possible before the trip so that we have a better idea of what it is we will face. Drawing on information and advice from reliable sources only makes our eventual responses that much more likely to be correct. And sometimes, you can have all the detailed info and ignore it – see our Day 6 canoe flip as proof!

Coming up soon after the eye-catching gravel banks lining the shore was a one-kilometer stretch of river which Hap Wilson labels as  Rapid #15 (rated CII to CIII). The various sets of rapids that make up #15 are given the nickname “Temptation Alley” in his Temagami guidebook, an essential source for anyone paddling Temagami’s lakes and rivers. He describes it as “a classic boulder bash with three separate runs”. We focussed on the comment that “all can be lined in the summer”.

So – we had the two following solutions to our “problem”:

Anything to save time and energy, eh? An hour and a half later of non-stop hopping from rock to rock and hauling our less-than-willing canoe downriver, we were at the bottom of “Temptation Alley”.  The Lord’s Prayer says “Lead us not into Temptation…”  We had made the wrong choice!  In our case,  “can be lined” did not equal “bros, go ahead and line it”, especially in mid-September! Live and learn…and remember the next time!

Pics of our pretty intense workout are scarce! Once or twice,  one of us observed that we maybe were getting too old for this! (Note: we have since reconsidered this rash assessment made under duress!)

Here is the only pic we took: it was taken from the bottom of a rough section between the first two wider and round river sections you see on the bottom of the above satellite image. It took us a head-shaking half-hour to move the less-than-100-meters between the two! 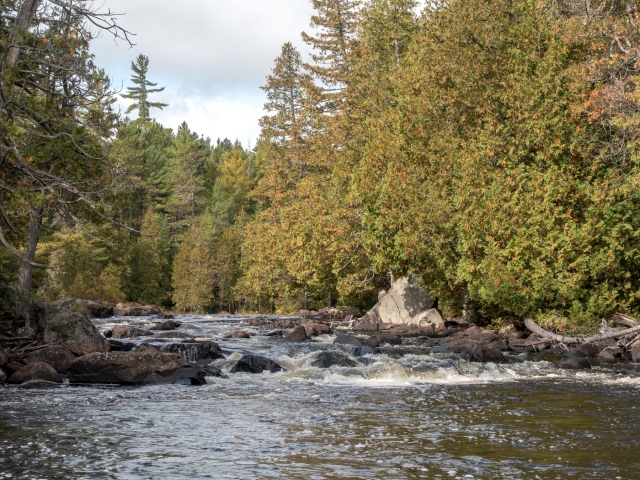 We did eventually get to the end, rueing our decision to stay with the river instead of doing the portage, which would have taken less than an hour and been much less stressful.  Apparently, the trail is a good one so it would not have been a repeat of the portage above Bridal Veil or the last section of the Bridal Veil trail itself.

And then – boom! the next “problem”! – Fatman’s Falls. Well,  no choice here – we pulled in at the top of the falls and got ready to carry gear and canoe to the other end of the trail, parts of which were actually walkable.  It is only a 100-meter carry so how bad can it be!

Fatman’s Falls on the Lady Evelyn

looking down the Lady Evelyn below Fatman’s Falls

It is the last stretch of the portage trail, the section that takes you down quite steeply to the shore and the put-in, that we will not forget. However, in hauling the packs I somehow missed the new and somewhat more gentle path down to the water and ended up going down via the legendary Fatman’s Squeeze.

I stood there at the end of the Squeeze and looked down the 45º slope to the put-in and inhaled deeply. While coming through the Squeeze with a canoe and then walking it down to the shore was never on my non-existent bucket list,  I figured the photo op was too good to pass up.

The rest of the video is down below!

portage trail from Fatman’s Squeeze to the water –

In the image above the last bit of the trail goes down a pile of jagged rock rubble diagonally from the Squeeze on the middle right to the water. Click on the image to access the white arrow pointing to the exact location of the gap you come through before doing the descent.

Max played videographer!  He was using my camera, one he was not familiar with – and my suggestion to use the viewfinder just confused him since he has always just used the LCD screen.  However, he did recover and shoot the rest of the descent – a less-than-graceful carry in which both ends of the canoe took a few bumps as I made my way down the steep and uneven slope.

The image below, taken a few minutes later, shows the same bit of trail from the bottom up. 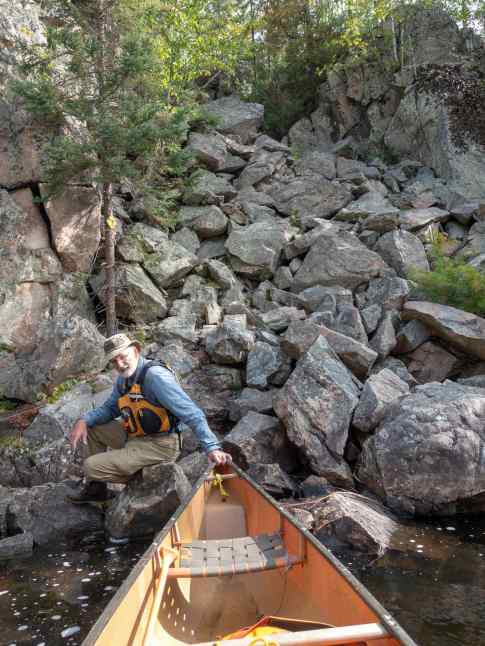 The Falls on the left and the final section of the portage trail to the right – our last look at Fatman’s before we continued our way down the Lady Evelyn.

Below Fatman’s Falls is another short set of rapids – #16 in the Wilson Guidebook. We lined the ledge at the top and then did a mix of lining and running the rest in shallow water. [The Chrismar map indicates a 290-meter portage on river left.]

Two more sets of rapids – both CI and easily run with some water.  We spent a couple of minutes at each examining the boulder arrangement and looking for the best channel to go down.

From Down River To Flat Water Paddling!

And with that, the down part of our Lady Evelyn River experience was over!  From now on we would be on flat water (about 289 meters a.s.l.) all the way to Mattawapika Dam some 40 kilometers to the east! Apex lake, the river’s headwaters, sits at 389 m a.s.l. – so from top to bottom, the river makes a 100-meter drop.

at the bottom of Lady Evelyn’s South Channel

Of that, 50% of the drop happens from Katherine Lake (341 m)  down either of the two channels to Willow Island or Sucker Gut Lakes, whose water level is the same as Lady Evelyn Lake thanks to the impact of the Mattawapika Dam.

We would start to see reminders of that impact.  In years past we had seen similar dead tree trunks in Sucker Gut Lake on our way to Maple Mountain. At the time,  we didn’t even know how they had come to be like that!  Here we were at the end of the South Channel where it soon becomes Willow Island Lake and we were seeing the same thing. 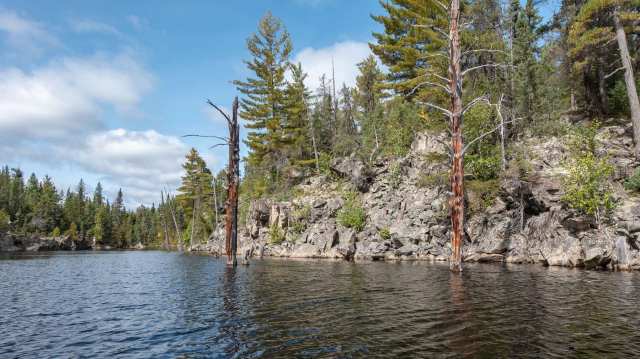 The “Two-Miler” Portage Into Diamond Lake:

If you are not intent on doing all of the lady Evelyn River system right to the Mattawapika Dam and the Montreal River, there are a few alternative routes you can take once you get to the South Channel. Making use of the “The Two-Miler” takes canoe trippers into Diamond Lake with options that include (from the put-in)

If you stay with the Lady Evelyn, from the South Channel take-out for the Two-Miler, it is about 50 km. to Mowat Landing with the one short portage around the Mattawapika Dam. 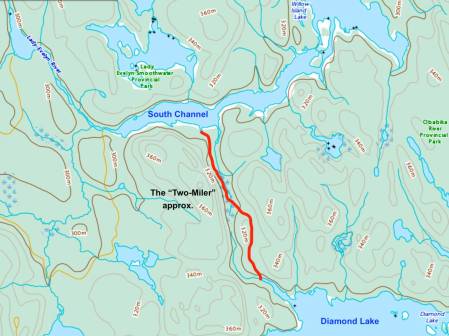 We paddled almost to the end of the South Channel before stopping at a spacious south-facing campsite around 1:00 p.m. Before we did anything else, we had lunch. Then we strung a line between a couple of trees and put out our gear to catch the wind and occasional rays of the sun; the previous day had been a wet one.

designated campsite near the end of Lady Evelyn’s South Channel

the front yard of our Lady Evelyn South Channel campsite

I also had some time to continue my quest for the blue mushroom, the Lactarius indigo. Thanks to the day’s slips and falls I found I could not even bend down completely to frame my macro shots the way I wanted. Luckily the camera’s LCD screen is hinged so I was able to compensate.

the mushroom quest continued – Day 8 and still no blue mushroom!

By 8:00 it was all but dark but for a while before that, we enjoyed the sun’s fading presence as it slipped down in the western sky.

a Temagami sunset on the Lady Evelyn River (South Channel)

Along with my leg aches and pains, I had somehow come down with whatever had ailed Max five days previously – some sort of digestive upset that had me leaving the tent four or five times during the night for a visit to the box you see below.

I considered Giardiasis or “beaver fever” as the cause of the symptoms I was experiencing but the fact that the next day I was feeling much better – just as Max had the day after his bout of whatever – seems to eliminate that as an explanation.

the thunderbox behind our tent on Lady Evelyn south channel campsite

Our weather app and the emails from home were telling us that the next day would be a very wet day in Temagami. We had a new “problem”: did we stay put the next day as the incoming weather system did its thing – or did we keep on going?

Next Post: Day 9 – From The Lady Evelyn River’s South Channel to the West End of Lady Evelyn Lake