The Cordillera Real has an inescapable presence and during our first few days in the Lake Titicaca area every once in a while I would find myself looking east and thinking – “We’re going to be over there soon.”  However, before the trek began, we spent a few days acclimatizing and what better way to do that than to visit Tiwanaku and to walk the pilgrims’ trail on the Isla del Sol!

The trek itself began after a bus ride up the road that leads from Huarina through Achacachi and on to Sorata. We would get off on the side of the road before Sorata itself and start the trek from there.  While it would have been nice to see Sorata,  the price would have been an eight-kilometer or more walk back up the valley. Also, Sorata sits at 2700 meters; we started our trek at about 3900!

N.B.: Images open in a new window with a click; all blue text is clickable.

So – since we really did not need anything in Sorata – the side of the road did the trick. We set off at 10 a.m., following a ridge and campesino paths as they passed through the terraced fields above Millipaya. We did get low enough in the valley to walk through the communidad of Llojena. Then it was uphill to our campsite above the village.

And so the adventure begins – thanks for the shot, Javier! 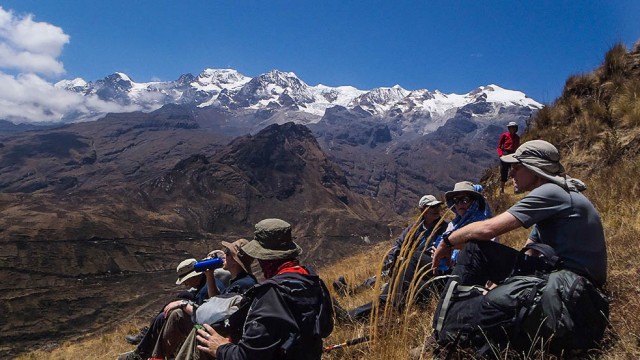 breaktime on day 1 above Millipaya – – another Javier shot

Day 1 – Distance and elevation – all images enlarge with a click!

As the satellite shot shows, we had great views all day of the Illampu Massif on the other side of the valley.  Visible were small communities on the mountainside. As well, we could see Millipaya and later Llojena on the valley floor.

the Illampu Massif and local villages on its lower slopes 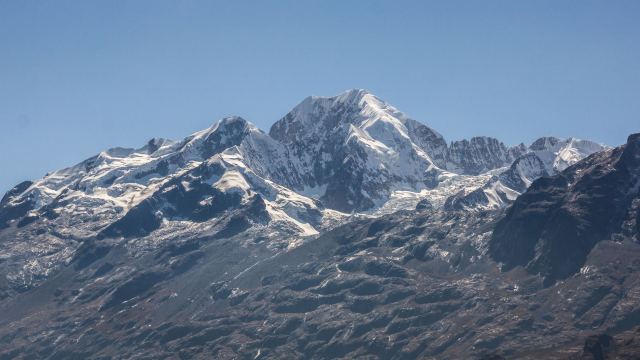 how to ruin everyone else’s photo – just walk into their view as I have done here! Sorry, Tony!

Nevado Illampu at 6368 meters is a bit lower than the peak just to the south, known as Jankuma – you’ll also find it spelled  Janq’u Uma or Ancohuma or Jankho Uma – which is 6427 meters high. That makes them the third and fourth highest mountains in Bolivia – the only peaks higher than these two are Illimani at the southeast end of the Royal Range at 6438 and  Sajama, a volcanic peak in the Cordillera Occidental, which is Bolivia’s highest peak at 6542 meters.

While not as high as Jankuma, Illampu is said to be the most difficult of Bolivia’s dozen 6000 meter plus peaks to climb.  A Cosley & Houston web page has some great detail on climbing the two peaks.  See here for the itinerary they developed.

the Ancohuma (Jankuma) complex of mountains – morning view from the west

As we walked the paths through the terraced fields, we heard blasting on the other side of the valley on the slopes of Jankuma. Soon the dust of the blast became visible.  Unlike neighbouring Peru where mining is controlled by large and often foreign companies, in Bolivia it is usually one of the 60,000 incorporated cooperativistas which is doing the extraction. During the trek we would see occasional evidence of this mining activity, walking on rough roads built to access the mines and passing by a few abandoned tunnels dug into the mountainside. (See here for some background on the mining cooperativistas.) 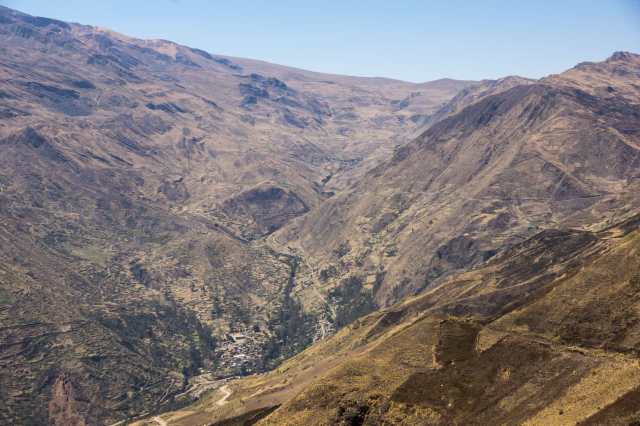 We spent the day walking on the upper slopes of the valley you see in the photo above. We got to the upper reaches of the valley above Llojena by 3 and settled in at our first campsite.  Already there when we arrived at 3 p.m. were the cook team- Lucretia, her daughter Patricia, and Florencia, who had come along to help Lucretia since she was not feeling well.  Also, there were the two SUV’s and their drivers. The tents were already up for us, as was the dining tent.

For the first four days of the trek, the SUV’s would move all the camping gear and food, as well as the trekkers’ duffel bags (officially no heavier than 15 kilograms each). On the fourth day, we walked into camp to find an arriero (muleteer)  and his helper, as well as a dozen donkeys.  They would take over from the SUV’s at that point and move us down the Cordillera for the next four days before being replaced by yet another team.  It all worked seamlessly, an excellent example of how the Andean Summits staff have developed reliable and experienced local support teams.

By 4 everyone had unpacked their sleeping bags and Thermarests, and it was time for tea and cookies. My biggest concern? I had forgotten to bring my Nalgene bottle, the one officially designated as the pee bottle.  The thought of crawling out of the tent at 3 a.m. to answer nature’s call had me searching for an alternative container! 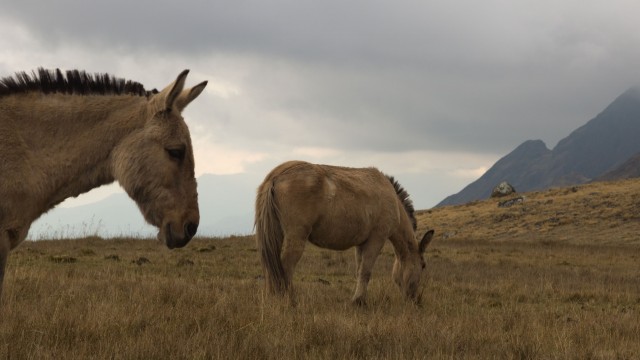 local donkeys grazing in the field by our camp

Bonus!  With my telephoto zoomed in to 300 mm I took a shot of Illampu and Jankuma from Isla del Sol’s high point. We had walked up there to see the sunset but, of course, we all turned east to see the Cordillera!  It is seventy kilometers in a straight line from the mirador (viewpoint) above the village of Yamuni to the Cordillera. It didn’t seem that far!

Lago Titicaca,  the Altiplano and Illampu and Jankuma  –  two of the Cordillera Real’s highest peaks –  from Isla del Sol Mirador