The Royal Ontario Museum’s Bishop White Gallery is a corner of the museum I have visited often over the past forty years. It houses a world-renowned collection of Chinese temple murals and Buddhist and Taoist statuary,  most of which date back to the Yuan Dynasty (1271–1368).

Below is an overview of what there is to see – the three great murals and a collection of wooden Buddhist temple statues on the island in the center.  While the space in which the collection has been exhibited since the museum’s glitzy retrofit in 2007 has all the charm of a warehouse, it is still nice to visit old friends! 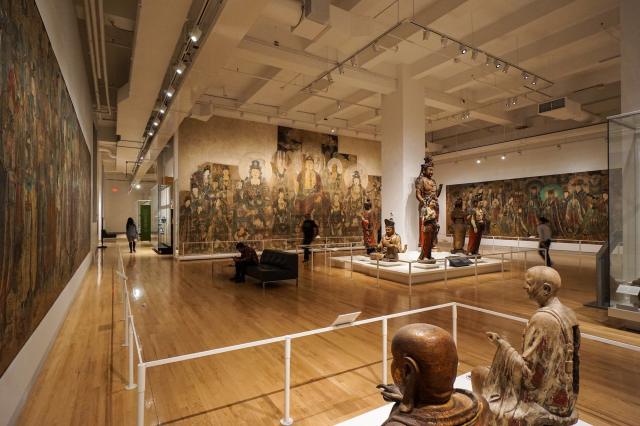 Information plaque at the Bishop White Gallery at the ROM

First up are a pair of Yuan Dynasty Taoist murals from Longmen Monastery in Shanxi Province.  From stylistic similarities with a similar pair of murals from a nearby monastery, a date of composition around 1325 C.E. is likely.   Together the pair is referred to as Homage To The First Principle (i.e. the Tao).

They depict a procession of celestial beings of the Taoist pantheon. For outsiders with no idea of who the figures are, the sheer majesty and the sense of order in the scene – as well as the colour – make the biggest impact.  What is lacking is a story to pull the viewer in – the very narrative that a Chinese peasant eight hundred years ago would have had no problem providing! 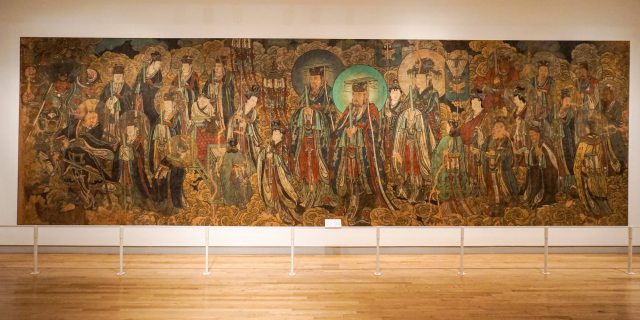 From the two Taoist murals, I turned my attention to the statues arranged around a central column in the middle of the space. 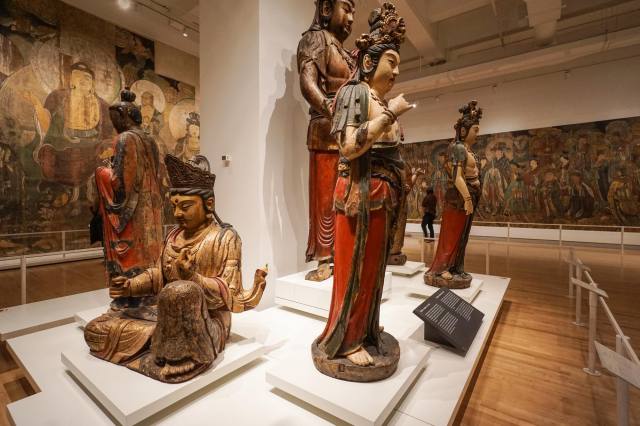 In the images above and below is a gilded wooden statue of a seated Dhritarashtra (Chinese: Chiguo Tianwang), the Guardian King of the East.  It comes from a temple in Jiang Xian and like many of the other statues dates to the Yuan Dynasty.  The “air guitar” placing of his hands is a clue that the statue originally included a lute.

Behind the statue of the Guardian King we see the sides of the single largest statue in the collection –  probably of the Bodhisattva Avalokiteshvara – and the pair of wooden statues (one of Dashizhi and one of Kuan Yin) flanking him.  I say “him”  and admit I am a bit confused!  The Chinese name for the Sanskrit Avalokiteshvara is Kuan Yin,  who is usually represented in female form.

Below is Dashizhi, identified by the crown which has in it what is said to be a vase.

I didn’t get a great shot of the complete central statue of the large Kuan Yin figure but here it is from the waist up.  Like the two flanking it,  the wood statue is painted and gilded.  Usually, Kuan Yin figures include a small image of Amitabha in the crown; this one lacks that detail.  However, his sheer size makes experts say he is “probably” Kuan Yin!   The statue comes from Daning, where it stood in the Great Buddha Hall. I think on my next visit I’ll make a point of getting a better shot! 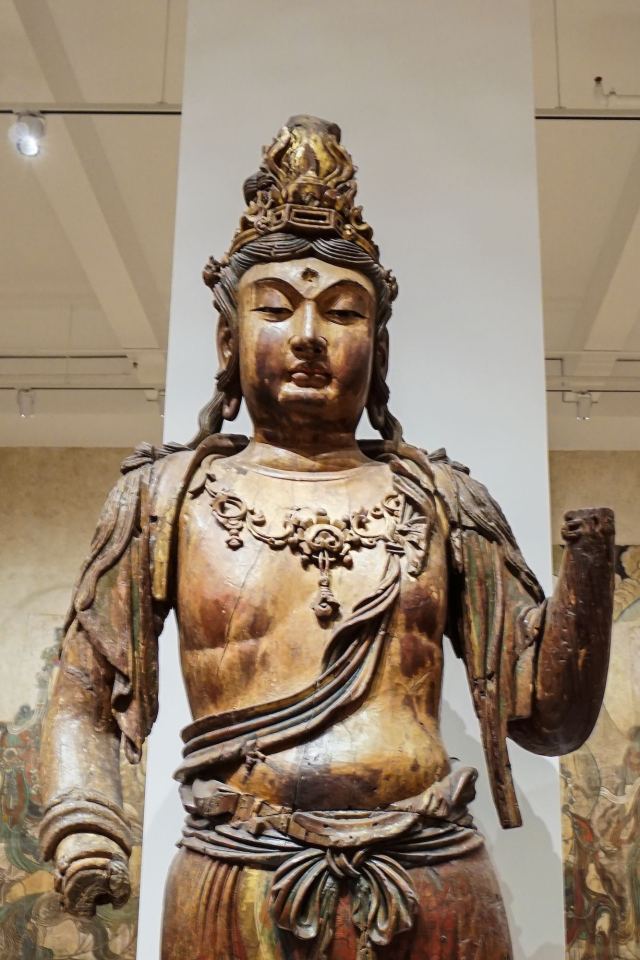 The companion statue to the Dashizhi to the left of the large Bodhisattva figure – also from Linfen in Shanxi Province and dated 1195.  It does have a figure of Amitabha in its crown which identifies it as a Kuan Yin.   The information board notes that this statue “has been painted at least four times, most recently in the 19th century.”  Along with the companion statue to the left, it originally flanked a large central statue of Amitabha.

Kuan Yin figure with large bodhisattva figure to the left 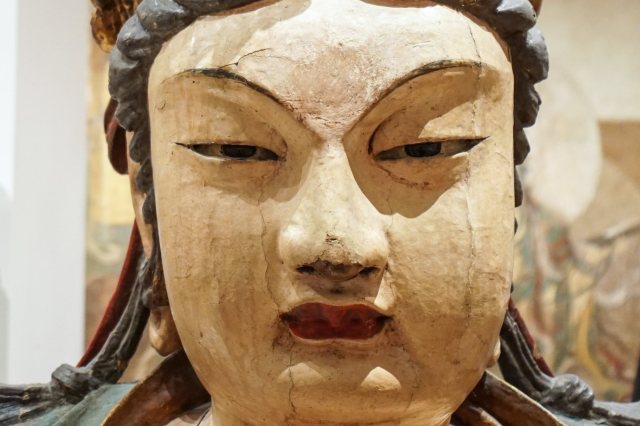 a close-up of the Linfen Kuan Yin

Yet more statues as I walk around the column … 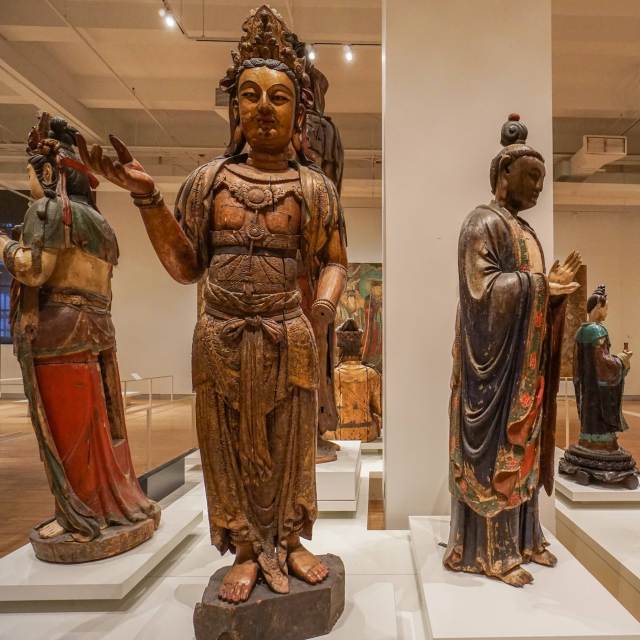 And finally, my favourite stop on the tour!  I am standing to the side of the mural titled The Paradise of Maitreya.  Unlike the two Taoist murals, this one actually has a narrative that helps me understand what I am looking at. First, I learned that Buddhism,  as the Mahayana form of it developed from the original austere form of its first few centuries,  has many Buddhas and celestial beings  – and not just the historical Buddha known as Siddhartha Gautama who lived north of the Ganges River around 500 B.C.E. 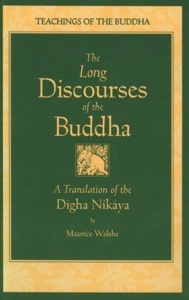 appears in Buddhist literature in the Theravada scriptures of the Digha Nikaya’s Sutta 26 (The Lion’s Roar On the Turning Of The Wheel).  As you read through you’ll meet some of the key figures of the mural’s story –

The sutra has the Buddha we know – the Sakyamuni Buddha born as Siddhartha Gautama – make this prophetic pronouncement: 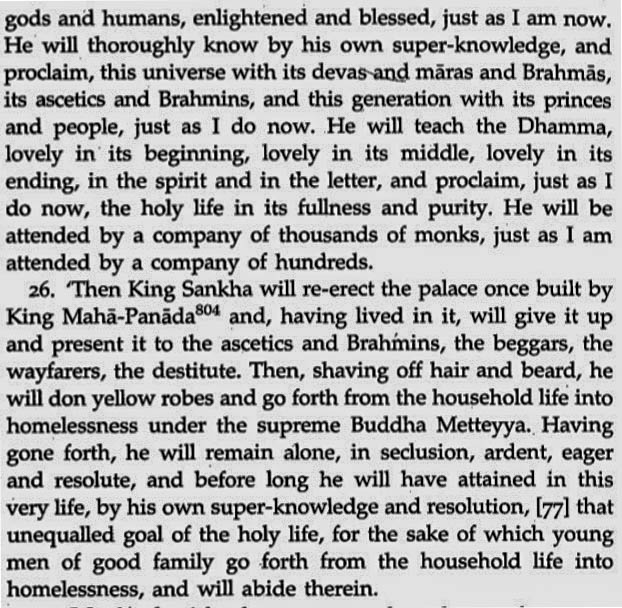 I’ve often wondered if the entry into Buddhism of this future saviour figure was a result of the spread into Asia of the Christian myth of the Returning Saviour.  Closer to our own time, various people – L. Ron Hubbard and the Raelian cult leader are two of them – have claimed to be Maitreya.  Krishnamurti was groomed from an early age for the position by the Theosophist movement. (He would later reject the title.)  If nothing else, we have here proof of the power of hope in a better future, a truth that goes right back to the story of Pandora’s box!

The seated Maitreya is the central figure.  He is in Tusita, the Buddhist Heaven where Bodhisattvas reside before they return to earth to become Buddhas.  To his sides are bodhisattvas, fully realized beings who in Mahayana Buddhism have postponed their own entry into nirvana to help others achieve it. Behind him are monastic disciples  – the shaved heads are a sign of this.  Had it been the historical Buddha we might know their names as Ananda and Kashyap.  While Ananda remembered and recited all of the Buddha sermons with the “Thus have I heard…” introduction, it was Kashyap who called and directed the first Buddhist Council after Gautama Buddha’s death to ensure the movement continued.  So too does Maitreya have his attendant monk and right-hand monk. Other celestial attendants flank him symmetrically on either side.

Trying to make sense of all of this will get your head spinning – especially if, like me,  you think of the Buddha as just a man who stripped away all the mythology and metaphysical mumbo-jumbo of the religion of his day to present a practical approach to living a meaningful life!  I’ve come to realize that the Buddhism I created in my head only exists there and not in the Buddhist societies I have visited.

The Paradise of Maitreya – central part of the mural

And even though it is the Maitreya, and not the historical Gautama Buddha, he still exhibits some of the features we associate with the latter – i.e. the elongated earlobes ( a sign of royalty) and the ushnisha or bump on the top of his head – originally a topknot or man bun which evolved into a cranial bump! However, he is seated “western style” as opposed to the cross-legged lotus position we associate with the Buddha.  His particular hand gestures – referred to as a mudra in Sanskrit – is known as the Abhaya mudra and symbolizes “Have no fear; all is good”. 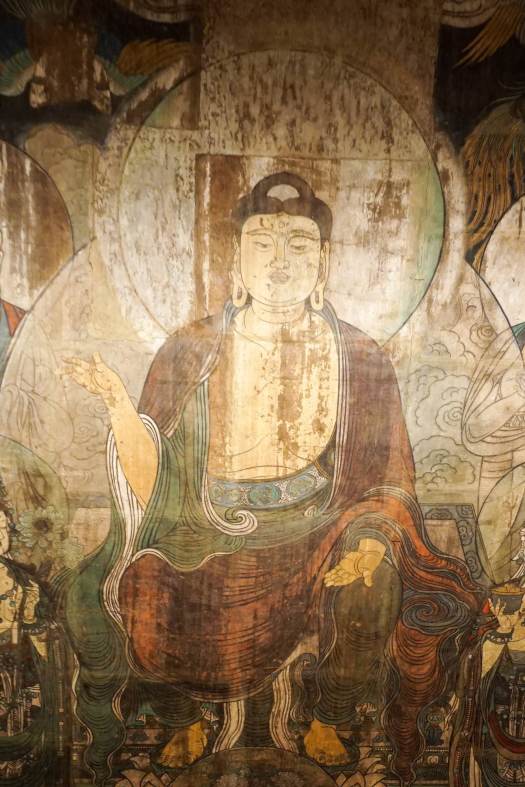 On the bottom left of the mural – we are in the earthy domain now and not in Tusita Heaven – we see the Queen of the Kingdom of Jambudipa – her name is Brahmavati, and her hair is being shorn as a sign of her renunciation of the material world and her position as Queen. A pilgrim standing in front of this mural would have been moved with the knowledge that the Queen would become the future Maitreya’s mother.

On the other side of the mural, her husband the King Sankha is undergoing the same haircut.   Not clear is who Maitreya’s father was – or whether, like the Zoroastrian Saöshyánt or the Christian Jeshua – he was born of a virgin.  More than just trade goods were carried along the ancient trade routes!

One of my favourite details of the mural is on the right-hand side.  On the seated king’s left a servant is ready to catch his hair with a gold plate.  And on his right – his young son wipes away a tear from his eyes, knowing that he is about to lose his father.

The Paradise of Maitreya – right-hand side of the mural.

The Museum has uploaded to YouTube an informative five-minute look at the painting and the story of how it got to Toronto. 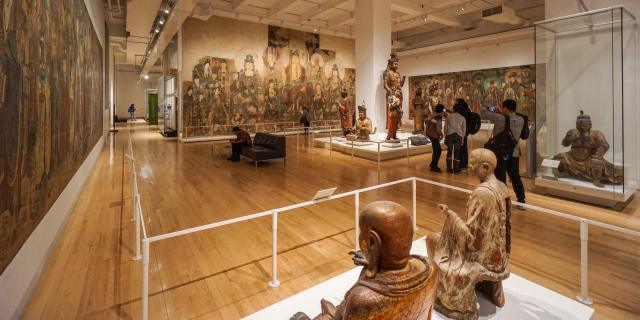 The R.O.M. is not the only North American museum with a rare Chinese temple mural on display.  I still remember a mid-1990’s visit to NYC and the morning we spent with a small part of the Metropolitan Museum’s truly incredible collection.  One room that drew me in had a mural from the same Chinese province of Shanxi as the ROM Maitreya mural. It had been donated to the MET in 1966 by a private donor whose father had acquired it in the mid-1920’s.

At that time the mural was still thought to be of the historical Sakyamuni Buddha. Here, for example, is a page from the Met’s Guide in 1994 – 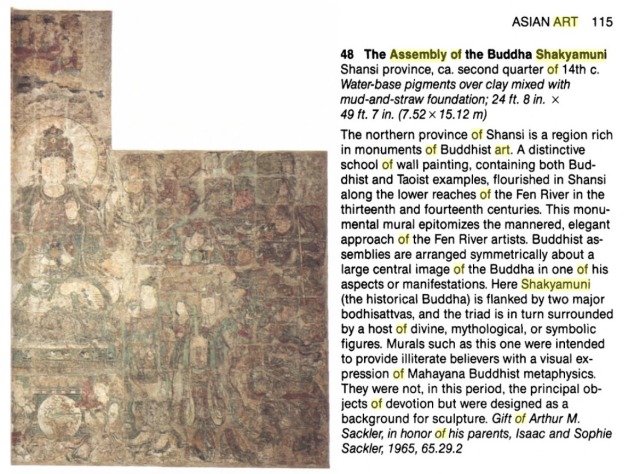 However, a paper by Anning Jing had already appeared in the Metropolitan Museum Journal in 1991 and made the case that the mural had been misinterpreted. The Yuan Buddhist Mural of The Paradise of Bhaishajyaguru (click on the article title to access) makes for an enlightening tour of the monumental mural and the identity of its many figures.

The Met’s YouTube video is another excellent five-minute excursion into history and context:

In looking for information about the ROM murals more than just the MET mural popped up.  Look at this mural from The Nelson-Atkins Museum of Art in Kansas City.

By the way, the Nelson-Atkins is also where a stunning statue of Kuan Yin resides. Having seen images of it before, I had always wondered where it was.  Now I know! 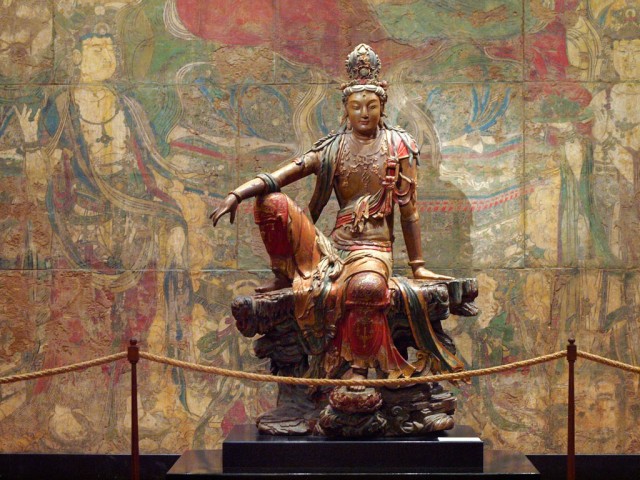 3. Philadelphia: The University Museum of the U. of Pennsylvania

The University of Pennsylvania’s Museum has a couple of murals also procured in the mid-1920’s.  Here is an overview image of the murals in the dramatic space where they are installed – 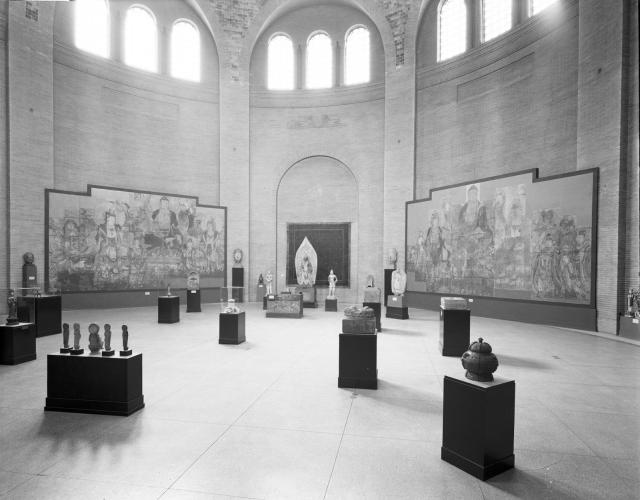 And here are the two murals closer up. 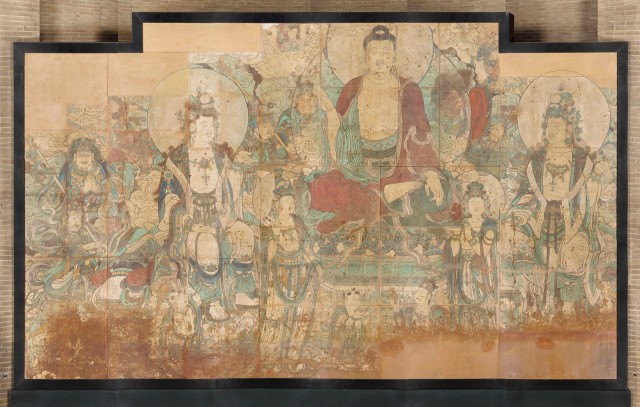 Until I wrote this post I had no idea all this existed.  It’s amazing what you uncover when you start to research just one thing on the internet!   Thirty minutes and a dozen clicks later and you are wondering – “How did I end up here?”   That’s got to be the curse – and the marvel – of the surfing the ‘net!

If You Want to Know More: 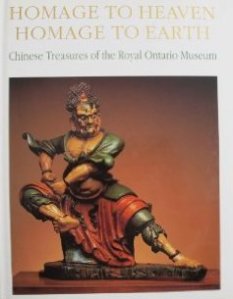 Homage to Heaven, Homage to Earth: Chinese Treasures of the Royal Ontario Museum. 1991. The book is the introduction to the museum’s collection of Chinese art and artifacts, one of the world’s finest. Included is a brief examination of some of the wooden statuary and the Taoist and Buddhist murals.

The Toronto Public Library has a couple of copies of the book available for online reservation.  See here.

Amazon lists a number of used copies from various vendors with $30. being the low price. See here.

Wikipedia articles on various topics, all thoughtfully written and with links to yet more information and images –

Sometimes things go wrong and images get mixed up. A Google page ( here) has an example! I think I’ll send them a note!

This entry was posted in Buddhism, Toronto. Bookmark the permalink.