Anishinaabe Pictograph Sites of The Canadian Shield serves as an introduction to this series of posts.  Originally one long and unwieldy post,  separate ones have been created for each province (or US area). Search for specific sites should be easier and faster.

All blue text leads to a map,  more info and/or pix with a click.

To date, some seventy different pictograph sites have been recorded in that part of Saskatchewan north of Highways 165 and 106. The first thing to note is that the pictographs are attributed mostly to Woods (or Rocky) Cree and not to Ojibwe “painters”.  The Cree and the Ojibwe do share a mythological worldview with many similar elements as illustrated by various rock images.  A few sites have also been credited to the Dene, in particular at least one of the four locations on the sixty-kilometer stretch of the upper Clearwater River just downriver from Lloyd Lake.

A fantastic collection of Saskatchewan pictograph images, the work of Robin and Arlene Karpan,  can be found here. You’ll see pics from Larocque Lake, Auld Lake, the Smith Narrows between Hickson and Maribelli Lakes,  Stewart Narrows, High Rock Narrows, Inman Channel by Keg Lake and Black Bear Island Lake, Manawan Lake, Medicine Rapids on the Sturgeon-Weir River system, and the Stanley Rapids on the Churchill River system.   Their book Northern Saskatchewan Canoe Country has these photos and many more; it also provides the routes and inspiration for at least a dozen canoe trips on which they paddled past these ochre expressions of Woods Cree/Algonquian culture.

The Aboriginal Rock Paintings of the Churchill River

It was Tim Jones’ 1974 University of Saskatchewan MA thesis which systematically recorded and analyzed twenty different pictograph sites on the Churchill River system.  It did for Saskatchewan what Selwyn Dewdney’s pioneering work had done for Ontario.  Titled The Aboriginal Rock Paintings of the Churchill River, it was based on four visits Jones had made to the river from 1965 to 1969. It provides a general but not super specific GPS location for each site, a description regarding rock type and orientation, and detailed descriptions and sketches of the various faces and paintings that each site has. The 23.9 Mb pdf file of his thesis is available for download here from the U of Sask’s eCommon website.

In 1981 his book with the same title was published. The Toronto Public Library system (Central Reference Library) has one copy (See here for the details.)  I spent a morning going through it and noted that it brings the research up to 1980 and is more polished than the initial MA thesis. It also added two new sites – the Pinehouse Lake (McDonald Bay) site and the Wintego Rapids site.

From the book, I also learned that Selwyn Dewdney (between 1962 and 1964) had visited twelve of the twenty Saskatchewan sites that Jones included in his original study.

More recently (2016) a second edition of the book was published so copies should again be readily available. Not clear is if it is just a reprint of the first edition or if it contains any additional text or drawings. See here for more info.

The first nine sites that Jones discusses in the above 1974 paper are as follows:

See here for a 534 kb file of the 1974 map indicating the approximate location of the various sites.

Canoeing the Churchill: A Practical Guide To The Historic Voyageur Highway (a 2015 reisssue of a book which was first published in 2002 ) looks to be a goldmine of info for paddlers and anyone interested in pictographs. Given the list of references in the index, the topic of rock paintings gets excellent coverage.  Click on the book title above to access the Amazon website.  If you want to see the first few pages of the book, a pdf file is available here at the University of Regina Press website.

Clearwater River – four sites downriver from Lloyd Lake to the junction with Virgin River, with two within twenty km below Lloyd Lake and one before the Virgin River junction

Churchill River (High Rock Narrows Site #1) –  location on the map based on Jones GPS coordinates.  It is actually on the other side of the narrows to the west of Site #2.  See here for Jones’ description of the two sites in this area.

Churchill River (High Rock Narrows Site #2) – most extensive collection on the Upper Churchill. See here for a satellite view of the area and nearby fishing/hunting lodge. Another image of Face VII here.

Max Finkelstein. Canoeing a Continent – On the Trail of Alexander Mackenzie. p.241

Larocque Lake – read pages 34-35 of this sample from Northern Saskatchewan Canoe Country by Robin and Arlene Karpan complete with many exquisite colour photos. Also see the Glenbow Museum’s Dewdney tracings of the Larocque Lake pictographs here or see the image below – 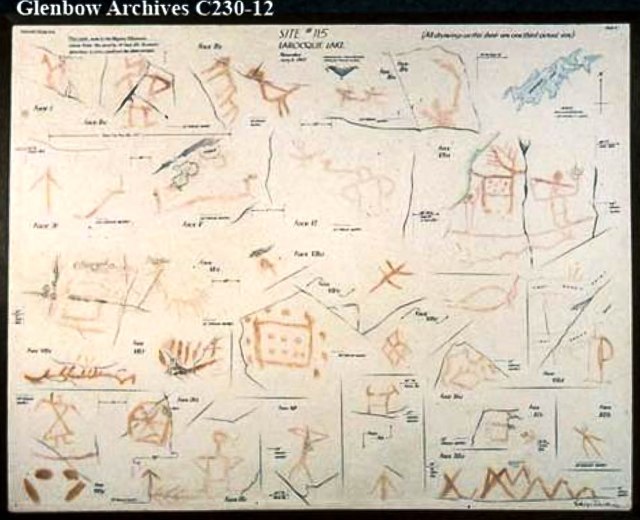 See above for the link to Glenbow Museum source

Reindeer Lake – nine sites near Southend. See here for a 7.7 Mb copy of the 2011 M.A thesis submission of U of Saskatchewan student  Perry Blomquist titled Contextualizing The Reindeer  Lake Rock Art for more discussion of the pictographs.

Links To Other Sources:

The Canoe Saskatchewan website (dead as of Nov. 2017!) had write-ups on five of the Churchill River sites and included sketches from the 1980 Tim Jones book mentioned above.  The web page covered the following sites –

An M.A. thesis paper submitted by Katherine A. Lipsett in 1990 to the University of Saskatchewan’s Department of Anthropology and Archaeology in Saskatoon is definitely worth the read.  Click on the title  Pictographs In Northern Saskatchewan – Vision Quest and Pawakan to access the pdf file.

In 2015 the University of Regina Press published Canoeing the Churchill: A Practical Guide to the Historic Voyageur Highway (click here for an excerpt, including the table of contents and the first few pages).  The book provides an excellent resource for anyone planning a canoe trip across Saskatchewan on the Churchill River.  It also refers to the pictograph sites mentioned in this post.  With The Tim Jones book and the Karpan’s Northern Saskatchewan Canoe Country, you’d be all set for an epic summer-long canoe trip!

These protected sites are only accessible by water. Contact Heritage Conservation Branch, Parks, Culture and Sport, prior to visiting.

The suggestion  – or is it a requirement? –  left me wondering if it applied to all visitors, including those at nearby fishing lodges and at privately-owned camps.  Does it apply only to non-First Nations people?  Just what is the point?  Feel free to provide a comment below if you have any idea!

This entry was posted in Pictographs of the Canadian Shield and tagged churchill river rock paintings. Bookmark the permalink.