Related Posts: See the Toronto folder for more posts and pix of my home town.

Yonge Street is Toronto’s main north-south street and the TTC Yonge-University subway line is called  Line 1,  the single busiest transit line in Canada. The downtown stretch of Yonge Street from just north of Bloor down south to the Harbour – and especially the section above and below Dundas –  has historically been the city’s main retail, restaurant, and entertainment strip.

However, times change – and so is Yonge Street!

There are all sorts of reasons why Yonge Street dropped off the map of my Toronto in the past decade or two!

While I remember with fondness that 18-year-old kid from a mining town of 10,000 walking down the freak show that was Yonge Street in 1969,  those days are gone!   And so – as the following pix will make clear to anyone over 40 – are an increasing number of the street’s tired and dilapidated buildings – and even some entire blocks.

Standing on Broadview Avenue across from Riverdale’s The Rooster Café I can look west over the Don River Valley and see the new buildings on Yonge that are changing the skyline.

I had some research to do at the Toronto Reference Library on Yonge near Yorkville Avenue – the street which back in the sixties was hippy central! –  and figured that afterwards  I would do something I hadn’t done in maybe fifteen years – walk down Yonge Street!  Along with my laptop I put my Fuji X20 in my backpack and walked over the Bloor Street Viaduct towards Yonge.

the Toronto Reference Library on Yonge

The Reference Library – Toronto’s third largest after the main libraries of the U of T and York – has been there for almost forty years, long enough for it to have a $40,000,000. renovation a few years ago! My research done – I think I was reading up on Ojibwe pictographs – I figured I would make use of the 4th-floor vantage point for some shots of Yonge Street. Looking south toward Bloor Street here was the view – 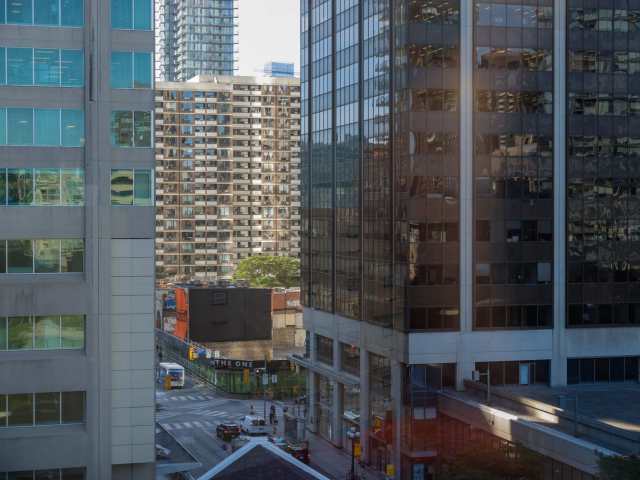 looking S to the corner of Yonge and Bloor

Next year at this time there will be a  998′ high condo/retail tower filling the space where you see the sign The One – as in 1 Bloor W.  It will be about 150′ higher than the 1 Bloor E tower across the street. Here is a satellite image from two years ago when construction on the 1 Bloor E. tower was just starting.  Keep on scrolling to see what is there now!

I looked west over the over the row of buildings that once included The Cookbook Store. It closed in 2014 after thirty years at the corner of Yonge and Yorkville.

While the front face of the buildings is still up there is a cavity behind that will eventually be filled by a 601′ condominium tower with 580 units.  The “heritage’ facade is staying! To the right is an image from the developers’ promo book. See here for the source.

looking over the 1 Yorkville site/corner of Yonge and Yorkville

One of my favourite bars on Yonge was the Morrissey Tavern at 817, just a few steps north of the library at 789. It was replaced with a condominium tower – the one at 20 Collier – in the early 2000s.  Already a decade before I had quit smoking and hanging out in bars like the Morrissey had become a lot less desirable!

excavation stage of the site across from the Reference Library

the saved fronts of buildings from Yorkville down towards Cumberland

I talked briefly to a guy wearing a hard hat and holding a clipboard about the excavation going on behind the facade you see in the pic above. I asked him why they were bothering to save such a shabby stretch of brickwork. Even creating a fake 1880’s facade would be easier than having to work around the original one. He said it certainly wasn’t the architects’  or builders’ idea and that sometimes you have to make concessions to get permits.

the saved facade at Yonge and Yorkville 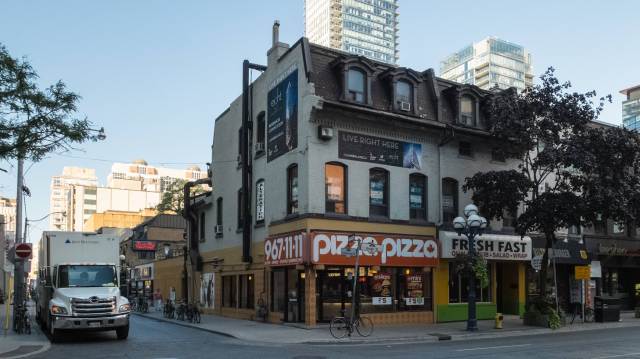 the NE corner of Yonge/Cumberland slated for development

The corner building – the one with Pizza Pizza on the first floor and the “Live right here” sign on the second – is slated for demolition.  Safe for now is the Pilot Tavern, another favourite watering hole back in the day.  It is admittedly looking a bit tired too!

Britnell’s was THE upscale bookstore in Toronto for decades but by the end of the 1990s the current generation of the family decided it was time to move on to other things. Visit the Starbucks in the space now and you will see the same solid bookshelves and the eye-catching black and white tiled floor. 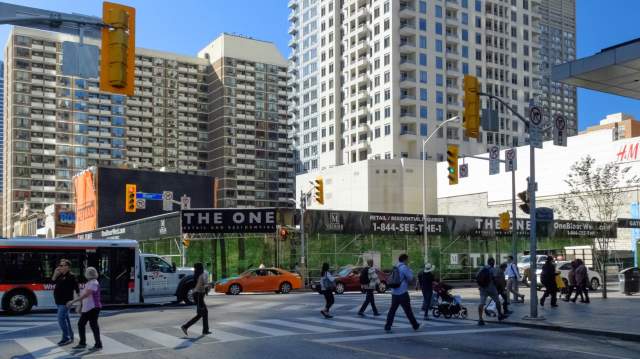 Bye, Bye Stollery’s – looking at the SW corner of Yonge and Bloor

The other day as I walked by the Necropolis next to the Riverdale Farm I noticed a historical plague acknowledging “The Early Settlers”.  It mentioned that the remains of these early citizens of Toronto had been moved from Potter’s Field to the Necropolis in the 1850s. And where was Potter’s Field?  I was standing in it at the north-west corner of Yonge and Bloor! Across the street was where Stollery’s – a conservative men’s clothing store – used to be.  I may have purchased a tweed jacket or two and a Burberry trench coat there before I devolved to Mountain Equipment Co-Op’s  “urban camper” style.

One Yonge Street – view from the west

Formerly One Bloor East and now just One Bloor – it certainly is a dramatic addition to the skyline.  When 1 Bloor West – billed as The One on the signboard above – is up, they can argue about which is truly The One!

Later that week while I was walking along the Danforth – about 3.5 kilometers from the Bloor/Yonge intersection. From this distance, you really notice how much taller than the CIBC Building or the Bay Building the newest addition really is.

a view of One Bloor from The Danforth near Carlaw Avenue

Now the CIBC “Tower” is just a mid-sized high-rise that will soon – when One Bloor West is up – be even more overwhelmed.  Perhaps its owners are already calculating the feasibility of a teardown and rebuild more keeping with the Bloor/Yonge intersection that Toronto haters across the country will say we think of as “the centre of the universe”.

the first block south of Bloor – east side of Yonge

The House of Lords still stands! 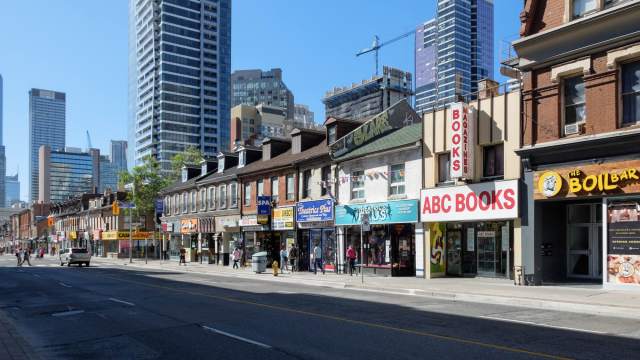 another block of vintage Yonge Street north of College St.

construction site between Maitland and Alexander

As I walked toward College Street I saw something I’d never seen before from Yonge Street – The Buddies In Bad Times building!  Taking out an entire block’s worth of buildings along Yonge can do that to the view. 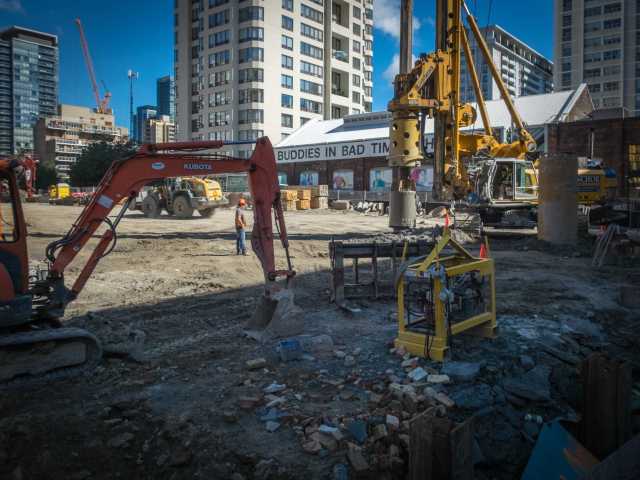 an entire block between Maitland and Alexander – gone!

To remind myself what had been there before I checked out the Google satellite view which helped a bit. What it shows is an entire nondescript block of vintage two-storey brick buildings.

Yong Street east side from Maitland to Alexander – before the demo crew showed up!

A block further down and more demolition – the buildings at the SW corner are gone. The billboard on the scaffolding says Canderel. Underneath I see the phrase “Project of the Year”.

SW corner of Yonge/Grenville – one block N of College Street

I turn to Google again to refresh my fading memory! While the satellite image predates the demolition, already on the doomed building is the tag “Condominium Residences”.

the new Canderel space on Yonge – before the demolition

Across the street from the College Park Suites is a parkette, created by closing the last twenty meters of McGill Street from Sheard Street to Yonge.  The result is a bit of empty space and a few trees on a bricked terrace right off Yonge Street. Across the street is the Aura,  currently the highest condo tower in Canada (but soon, I am sure, to be replaced by another Toronto tower holding the same distinction).

The McGill Street Arch and Parkette across from The Aura 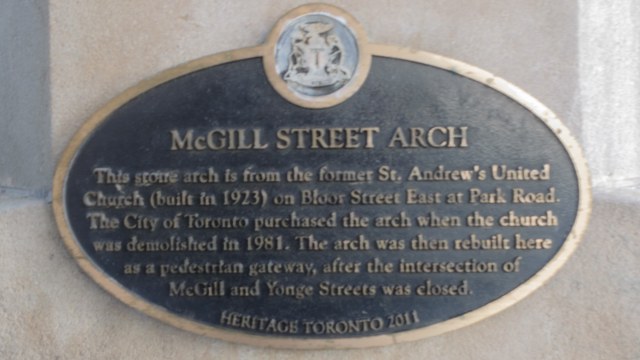 a stretch of “heritage” Yonge Street

a classic Yonge Street building in the heart of downtown!

I can hear the arguments for preserving the historical facade of this slice of the old Yonge Street just north of Aden Camera. “It’s a part of our heritage!” 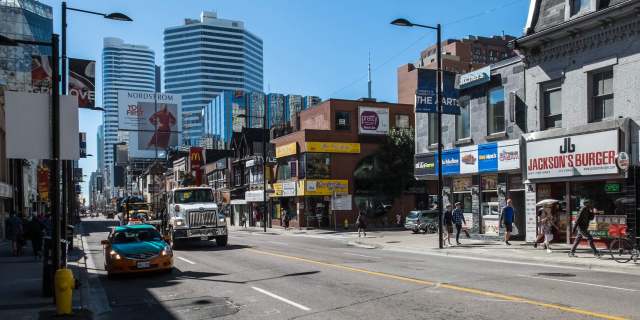 approaching Dundas from the north on Yonge Street 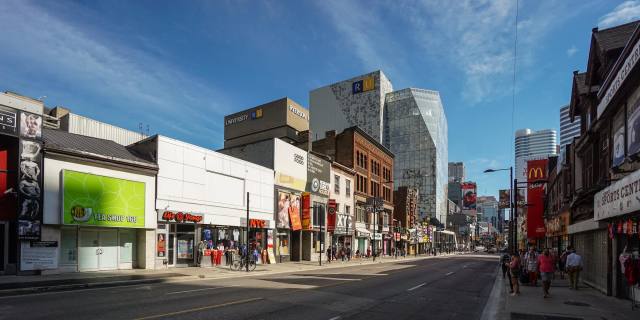 I looked across the street from the west side to a spot whereI spent hours in my younger years. Given my obsession, it was almost like a weekly pilgrimage – sometimes on Friday nights, sometimes on Saturday afternoons.  And no – not the Zanzibar strip club!

The Zanzibar Club and the Ryerson U’s Student Learning Center

The Ryerson building sits where it used to be and even the iconic sign is gone but from my mid-twenties to my mid-thirties I spent more time than I should have leafing through the record bins at Sam The Record Man’s.  Occasionally I’d also visit A & A’s next door.  Now I just have to wonder – what was  I looking for? 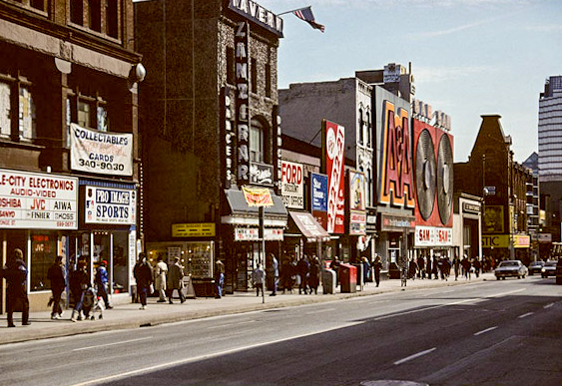 The Zanzibar, A&A’s and Sam’s in the 1970’s – see here for internet source –  City of Toronto Archives

I walked up the steps of the Ryerson building and tried to guess if I was anywhere near the space that used to hold the blues and folk sections in Sam’s store.  Memories of walking into the University of Waterloo’s Campus Centre in 1969 as a first-year student flashed by as I walked up these Ryerson steps, looking like a very securely tenured professor who was contemplating imminent retirement! 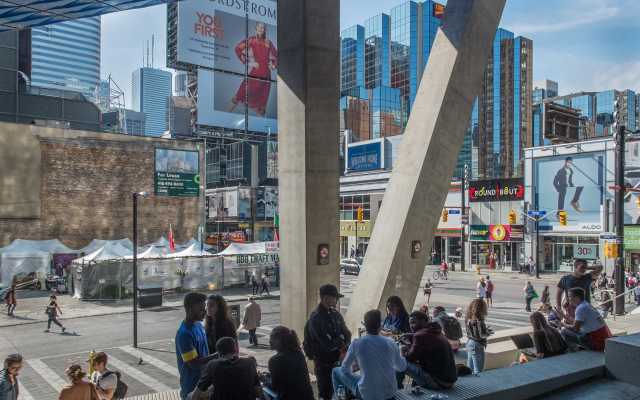 the view from the front steps of the Ryerson Student Building

a wall of advertisement across from Ryerson’s Student Learning Center 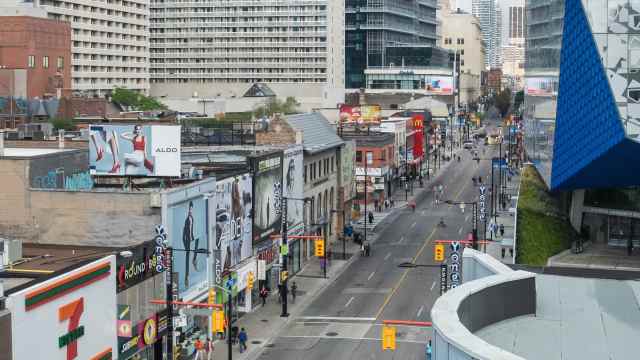 Yonge Street across from the Ryerson Building

Just off Yonge on Edward Street was maybe The World’s Biggest Bookstore. In the days before Amazon and its massive online book selection which you can have delivered to your front door within days, The World’s Biggest  was one of the regular stops in my ongoing quest for interesting reading – along with BMV next door  and Britnell’s and Book City and a number of used bookstores along Spadina and on Queen.  Now it is that empty lot to the west of BMV.  Originally slated for development as a low-rise row of restaurants, revised plans have a thirty-storey condominium tower there with some retail on the bottom.

the empty lot that once was The World’s Biggest Bookstore

A block down from the Ryerson building is Dundas Street and the north end of the Eaton Centre, a 1970’s redevelopment which profoundly altered at least the west side of the stretch of Yonge Street from Dundas all the way down to Queen and the old Simpson’s store (which was bought by the Hudson Bay Co. in 1978 and recently sold by them to Cadillac Fairview, the entity that owns the Eaton Center complex).

the public square on the SE corner of Yonge and Dundas

I ended my day when I got to Dundas and hopped on the 505 streetcar back to my Riverdale neighbourhood.  A few days later I would return to Yonge Street to finish my walk down to the harbour.  While the stretch of Yonge from Dundas down to the lake always seemed to have more substantial buildings, there were still more surprises in store!

Riverdale view of downtown Toronto – from Bloor To Dundas

Check out the urban Toronto map to appreciate the level of redevelopment going on in the city. It helps make clear why Toronto over the past few years has equalled or surpassed New York as  #1 in North America for high-rise construction projects

Next Post: Toronto’s Main Street In Transition – Yonge From Dundas To The Harbour