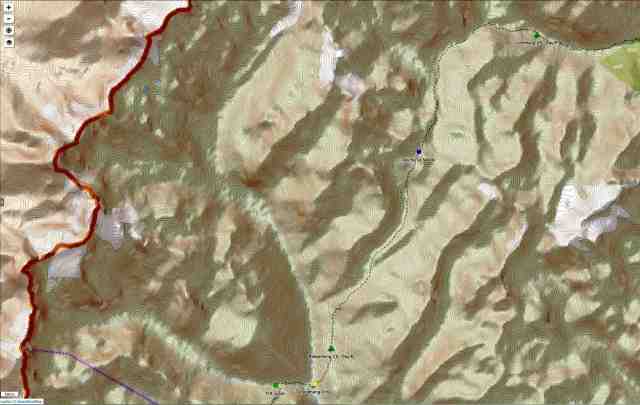 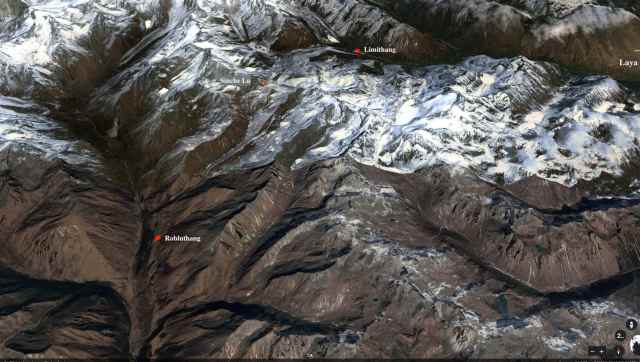 satellite view of the trail from Robluthang to Limithang 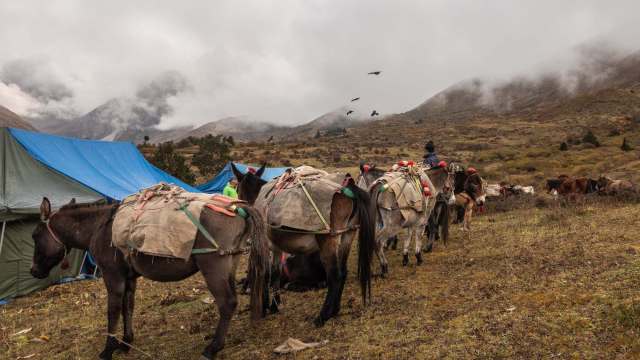 horses waiting for the day’s work assignment at Robluthang camp

On The Way To Sinche La:

The highest pass of the trek so far was on the menu for this day.  Sinche La at 5000 m was just 20 meters higher than our very first pass, Nyile La which we did the day we left Jomolhari Base Camp.  Over the first five hours, we curled our way into a side valley from our Robluthang campsite and then walked the left side of a valley to the bottom of the slope with Sinche La.  As the images show, we were not blessed with a sunny day and blue skies. 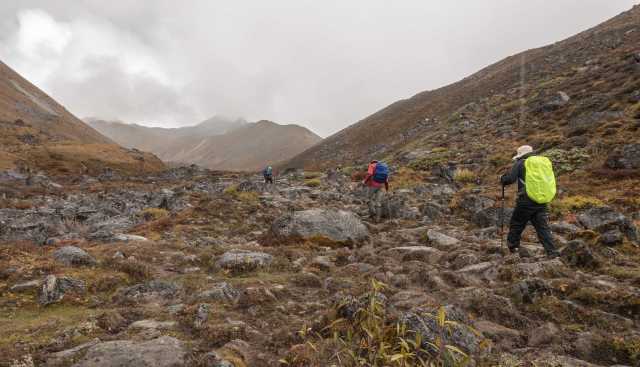 Along the way, we passed by some plants unlike any I had never seen before in the Himalayas.  I was amazed that they were there at all in a pretty inhospitable spot. Maybe the mist from those clouds we were walking through keeps them alive! I would later find out that it is a form of rhubarb native to the Himalayas.

The Wikipedia entry on Rheum nobile describes it this way –

…a giant herbaceous plant native to the Himalaya, from northeastern Afghanistan, east through northern Pakistan and India, Nepal, Sikkim (in India), Bhutan, and Tibet to Myanmar, occurring in the alpine zone at 4000–4800 m altitude.[2]

It is an extraordinary species of rhubarb (genus Rheum). At 1–2 m tall, R. nobile towers above all the shrubs and low herbs in its habitat, and it is visible across valleys a mile away

It is as if it were a beacon guiding travellers!  Below is another one we passed by; 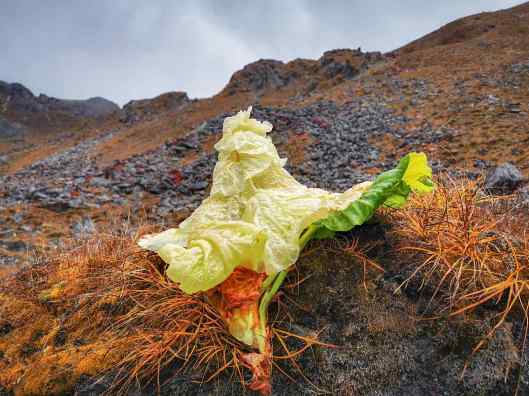 A half-hour later the pass was finally in view.  As I caught my breath for a moment for the final push to the top, I watched our lunch team horses continue upwards.

Under The Tarp At Sinche La:

While the original plan had been to have lunch on the downside of  Sinche La,  our guide made the decision to stop just below the pass for lunch instead. While half the group was already standing by the chorten at the pass, the other half was some distance behind. Instead of having us wait at the pass until they arrived and then continue on down on the other side, we set up the lunch tables and chairs just below the chorten.

the lunch tent at Sinche La

We just happened to time lunch with a thirty-minute hail/snowstorm! Up went the blue tarp to cover two of the tables. Soon the green tarp went up too and more space was created.  Meanwhile, the rest of the crew had arrived and lunch was on! 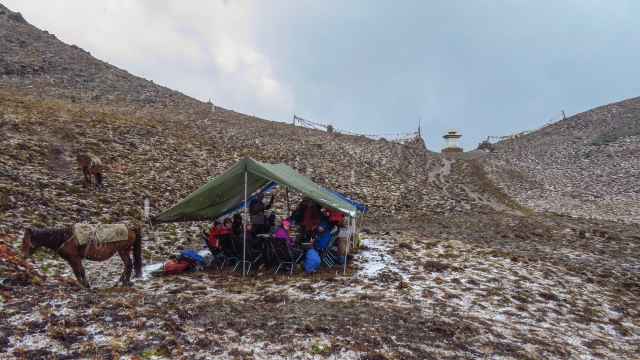 photo by another one of the members of the trekking group

trekkers heading to Sinche La from the lunch shelter

After lunch was over we headed up to the chorten; the rain pants / rain jacket combo helped keep everyone dry and warm as we stood there for a minute or two.

standing at Sinche La and about to descent towards Limithang

From that shot of the chorten at Sinche La, my camera was most untouched (and tucked away to keep it dry!) I did take a couple more photos that day. The first one below is of Gangcheta (aka Great Tiger Mountain)  on the Bhutan-Tibet border, until now like a snow leopard pretty much a rumour only on our Snowman Trek.

The second shot was of a section of trail following a glacial stream. Not even any campsite shots on this day. The one below is of the next morning.

Limithang campsite – the next morning

The Limithang campsite is an open area sure to please tenters with its flatness and the horses with the availability of grass. Flowing down past the camp area was a river from the Tibet-Bhutan border that eventually ends up in the Mo Chhu, the river which flows by Punakha. 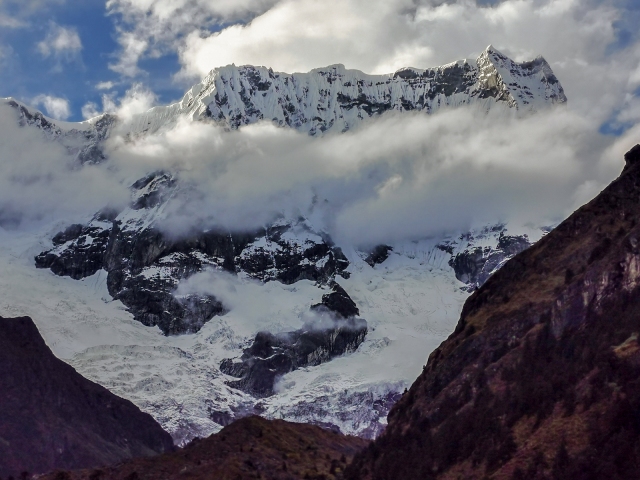 Later when I looked at Polar fitness tracker stats for the day,  the calorie output for the day was the largest of the trek so far, double the calorie expenditure of the day before!

Luckily, our walk the next day to Laya was really only a half-day.  Also coming up was a rest day in Laya while we got ready for the next half of our Snowman Trek, into the remote Lunana region.