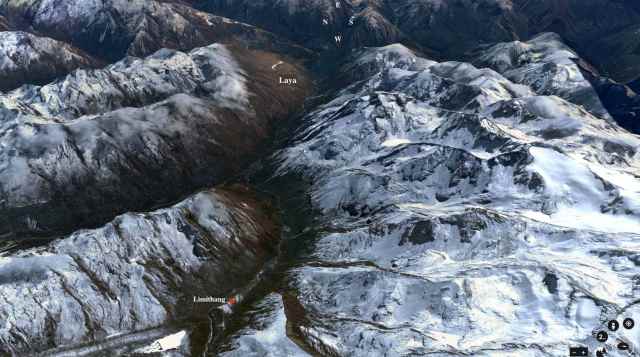 Limithang to Laya – Day 10 of our Snowman Trek

I crawled out of the tent shortly before 7 and could feel the rays of the sun, a novel experience on this first half of the trek.  Looking north towards Gangcheta, aka Great Tiger Mountain, I was able to capture a bit of the rainbow’s splendour, even if the mountain peak was not co-operating! 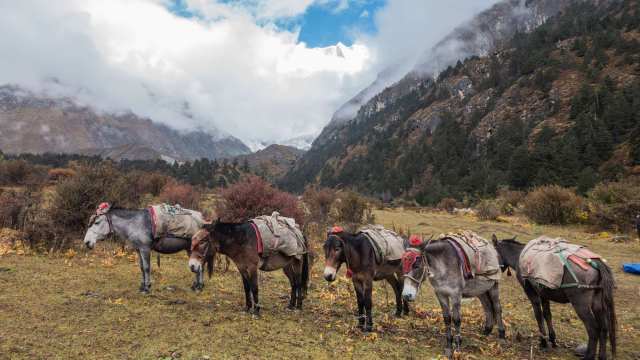 This would be the last day of work for these horses. Their handlers would take them back to the settlements near Jomolhari Base Camp, from where we had set off with them on Day 4. Instead of the six days it took us to get to Laya, it would only take them two to get back home! Impressive!

Hopefully, there would be another trekking group whose gear they would be able to haul.   I was told that they get $20.US a day for each horse. While I’ll admit I am skeptical about the sum, if it is correct then they were going home with a pile of money. ($120. a horse x 43 horses!)  The horses provide a nice cash infusion at a time of the year when the harvest is done and everyone is preparing for the winter.

a horse with decorative headcover at Limithang camp

The trail starts off on river right but less than a kilometer from the campsite we crossed over to the other side and continued for an hour on river left all the way to its confluence with another river.  There we crossed over to river left.  At this point, we were at 3800 m and would mostly remain within fifty meters above or below this elevation until we got to Laya. The elevation states were as follows: 80 ascent; 380 descent. 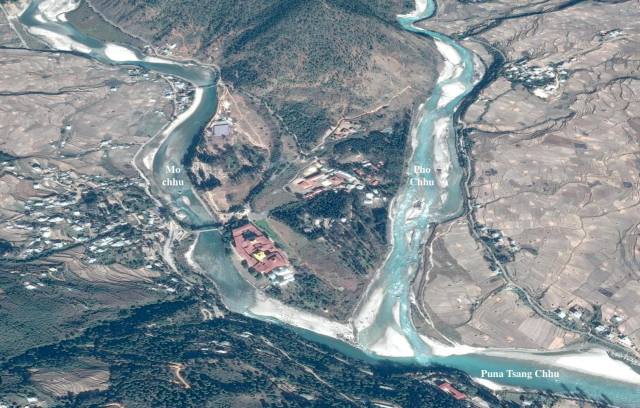 [Chhu is the Dzongkha word for “river” while Mo and Pho mean “mother’ and “father”. Dzongkha is the language of the Ngalop ethnic group of Tibetan origin who are the dominant political and cultural group in Bhutan.

The Ngalop were the ones who built all the dzongs, the fortress monasteries from the 1600s, a time when various Tibetan Buddhist sects fought each other and other Buddhist invaders from Tibet for control of the space we now know as Bhutan. They live mostly in western and central Bhutan and are the ethnic group that tourists will come to associate with Bhutan itself, even though there are other major ethnic groups.

The situation reminded me somewhat of Myanmar with its dominant Bamar ethnic group surrounded on the periphery by people of a hundred other smaller ethnic identities. The big difference is that the Bamar constitute 68% of Myanmar’s population whereas the Ngalop people make up about 20% of Bhutan’s.  (That figure can be pushed up to 50%. It all depends on how liberally you define Ngalop.)

It does put a different spin on the quaint traditional Ngalop clothing that we saw even our guides wearing on certain occasions.  It left me wondering – Are all ethnic groups in Bhutan required to dress in Ngalop fashion?  How do they feel about this?  Let me know in the comment section below!]

Back To The Day’s Walk:

The expectation of an easy 11 km downhill walk to Laya was soon dispelled as there was a  fair bit of scampering up and down hillsides. Much of the trail passes through heavily forested slopes along the river banks.  Here is how well my Polar M430 was able to connect with the GPS satellites thanks to the dense tree cover we walked under!

Not a shining moment for the M430 though but understandable given that it is a fitness tracker better known for heart rate recording.  My Garmin inReach Explorer, however, was able to record an elevation point each minute.

peaks shrouded in mist on the way to Laya from Limithang

Another clouded-over day on our ten-day walk from Shana – and another day of mountain peak views that looked like the above image.  I couldn’t help but contrast this with the excellent weather I have always experienced on treks in October and November in the Nepal Himalayas. For the last hour, it rained more heavily but my calculation at the beginning that it would stop soon turned out to be a bad one!  While I had slipped on my rain jacket, I did not bother with my rain pants. My bottom half got soaked!

We arrived in Laya around noon, about four hours after having left our Limithang campsite. As we approached the village, there was a fork in the trail. The left-hand one leads to the upper village. We took the right-hand fork and soon found ourselves in front of an ornately decorated building in the Ngalop style.  I never did find out if it was a temple (lhakhang in Dzongkha ) or not.  One of our guides took the opportunity for a group photo for a mostly successful first half of our trek. (One of our trekkers had developed a severe cough and respiratory problems and would leave the trek here, heading down the road to Punakha and Thimphu for medical treatment.)

I took the following image the morning from higher up and to the east the next morning. It captures most of Laya.  Click on the image to see:

a view of Laya from the hill to the east

Our campsite was located behind a lodge whose toilet facilities and dining room we made use of during our two-night stay in Laya. At least I think it was a lodge! None of the commercial buildings in Laya Village have signs up advertising their service.

our Laya tent site behind a lodge

We had finished the first half of our Snowman Trek. Still to come were the following:

If it is true that the eastern Himalaya weather tends to be wetter and cloudier than that in Nepal, we would have better luck for the next twelve days. The relative lack of mountain views that characterized our Shana-to-Laya trek would thankfully be replaced by more blue skies and clear views and some incredible vistas.

But first,  we had a rest day in Laya!  See the next post for some pix of Laya village.