Colombo’s National Museum – Some of What You’ll See 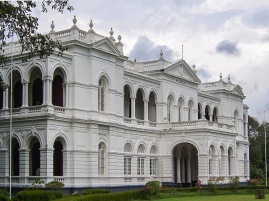 Sri Lanka’s National Museum is located at the south end of Viharamahadevi Park not far from Galle Road and the Fort and Pettah districts.  As the repository of many of the moveable artifacts from the area where the country’s pre-modern history was played out ( the so-called “Cultural Triangle”), it houses some impressive examples of Sri Lanka’s cultural legacy. 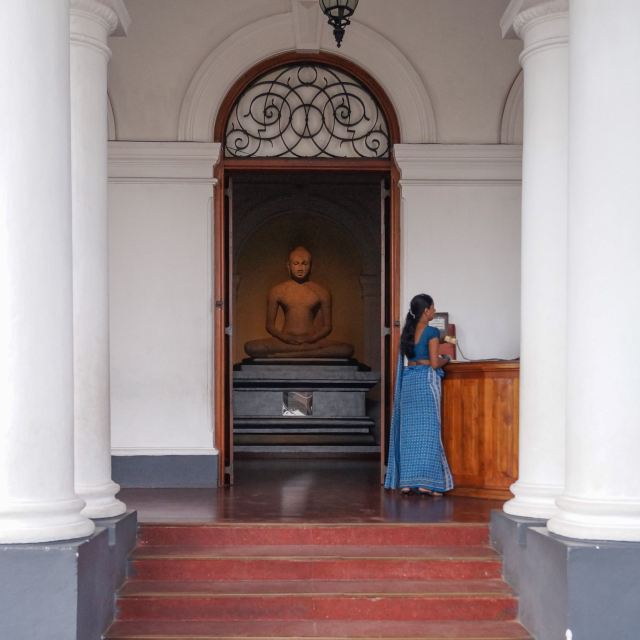 The collection is housed in a Neoclassical-style building which goes back to British times, having been built in the early 1870’s and opening its doors in 1877. From a humble initial collection, its holdings now number over 100,000 artifacts.  None is more dramatic than the very first one you see as you approach the entrance lobby.

An unadorned seated Buddha carved out of limestone awaits  – exuding both serenity and strength. Created in the Anuradhapura area around 1300 years ago, it survived the collapse of that great Sinhalese capital. The elongated ears, the curly hair, the bump on the top of the head (the ushnisha), the hands in the classic meditation mudra (position) – but no attempt by the artists at creating the folded monastic robes that other Buddha figures sometimes are provided with. 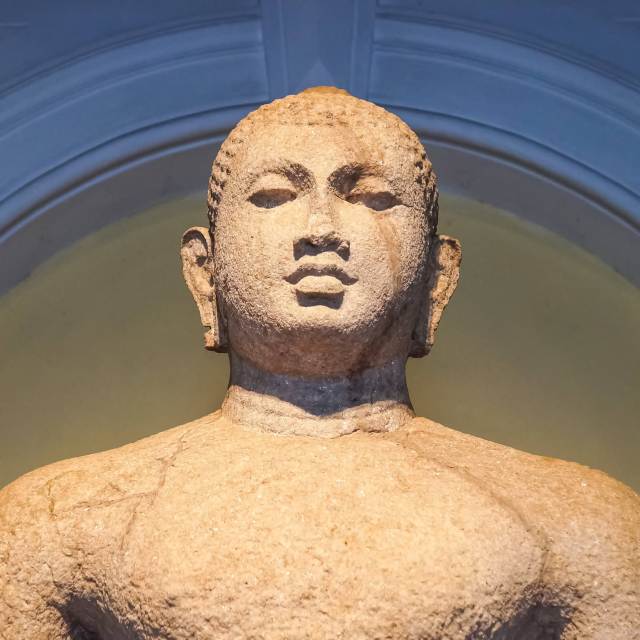 looking up to the Buddha at the main entrance

The ground floor is divided into a number of rooms or galleries – each with its own theme.  What follows is a highly selective – that should probably read “subjective”! – sample of exhibited sculptures that caught my eye. Room 1 deals with the island’s pre-history; rooms 2 and 3 have a number of Hindu and Buddhist statues of various sizes; rooms 4 and 5 concentrate on the more recent Kandy kingdoms before the British established complete control of the island in 1815. The second floor was not open for public viewing when I was there; a verandah on the ground floor has more examples of stonework rescued from various ancient sites on the island, but many are in poor shape.

I spent a very enjoyable hour and a half with the artifacts – mostly in Rooms 2 and 3! –  before I returned to the seated Buddha in the front lobby. The lighting and the glass, which is often between the lens and the various artifacts,  can pose a real challenge to someone intent on taking better pix; I ended up shooting everything with a 35 mm prime lens on my Sony DSLR; the results were – as you will see – not the best!

One thing the collection brought home was the presence of Hindu religious objects among the ruins of the ancient kingdoms.  Clearly, the notion of an ancient Sri Lanka staunchly following the conservative Theravada path is the result of modern Sinhalese Buddhist nationalism and not really a true reading of the past.

the Hindu god Surya – a sculpture from 10th C Anuradhapura

The Vedic deity Surya holds a lotus in each and; behind him is the solar disk (partly broken off) associated with this sun god.  Not far from this piece from Anuradhapura, with its three major Buddhist monasteries, was this depiction of the multi-armed Hindu goddess Durga, a consort of the god Shiva, one of the three gods who make up the Hindu “Trinity”  – the Trimurti – along with Brahma and Vishnu.

The standing Buddha below, unlike the one in the entrance lobby, has been provided monk’s robes (which may show the influence of the Graeco-Indian  Gandhara style of Buddha depiction). He stands there very solidly and stiffly with his right shoulder uncovered – an apparent trait of Sinhalese Buddhas. 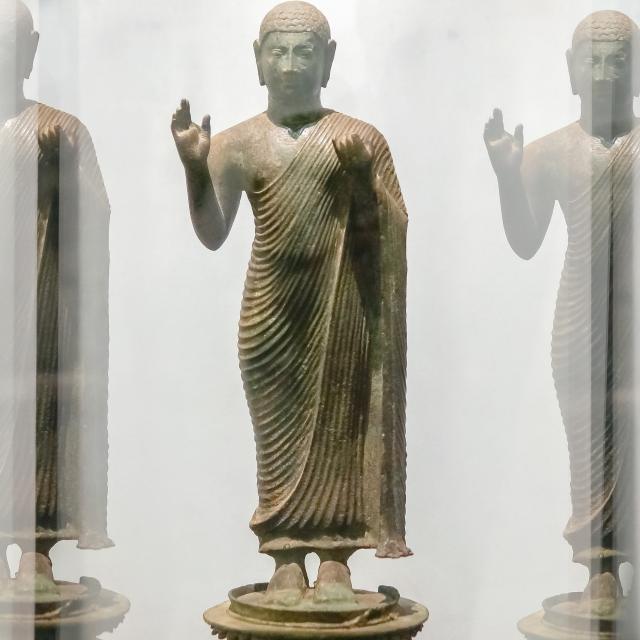 Anuradhapura was not only the home of the conservative Theravada school; to the north of the ancient city was the Abhayagiri Monastery which embraced a more liberal kind of Buddhism – the Mahayana school which would become so popular in China and Japan. The statue below depicts one of the three major bodhisattvas, the one associated with “Protection”. Along with Avalokitesvara (“Compassion”) and Manjushri (“Wisdom”) and a number of others, this bodhisattva is recognized for selflessly postponing his own nirvana so that he can help others get closer to the goal first.

I was surprised to find this silver alloy cast figure of Tara among the gods and buddhas. I had always associated her with Tibetan Buddhism but given that Buddhism had barely arrived in Tibet when she was being created in Sri Lanka, I need to do more research about her story.  She is regarded as a bodhisattva with the quality of compassion, which connects her with Avalokitesvara.  This may help explain why in China the male Avalokitesvara became the female Kuan Yin.

A better photo of a better sculpture of a standing Buddha figure, his right hand in the abaya  (“No Fear”) mudra. Like the one above he wears his form clinging robes with the right shoulder bare.

The  next two pieces were two of the ones I spent some time appreciating. The first depicts Buddha seated on a lotus in the meditation mudra (his hands resting in his lap). The ushnisha as flame of fire on the top of his head is a touch that would find its way to Burma and Thailand  in the centuries to come.

The next piece – while not as imposing –  rivals the Buddha in the front lobby for skill of artistic execution. The pose was often copied by  Buddhist sculptors and painters in other lands. (See here for one of my favourite Chinese depictions.)

Below on the left is a standing Tara figure; on the right is a guard stone taken from Polonnaruwa, the capital of a Sinhalese kingdom for a couple of centuries after the collapse of Anuradhapura. Three cobras provide a hood for the central figure, who is holding a tree branch and a vase (the punkalasa or pot of plenty). At his left foot is a dwarf figure.

More evidence of Hindu – as in Tamil – presence in the Cultural Triangle a thousand years ago can be found in the following images, beginning with a skillfully done version of Shiva as Nata Raja, the Lord of the Dance, his dreadlocks flowing as he dances on the dwarf of ignorance.

Shiva – the Lord of the Dance

More Hindu imagery followed with the following stone sculptures.  One was of Nandi, a bull figure associated with Shiva.

The Hindu god Ganesha, son of Shiva and Parvati, was also represented with a number of sculptures.  Two of them are below, both depicting a seated elephant-headed figure and bearing a number of similarities, including a rather full belly. 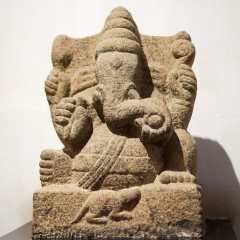 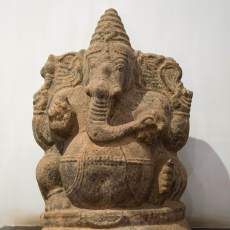 And then it was back to the Buddha. First I contemplated this rather dour seated Buddha exhibiting all the usual characteristics.  And then I found a display that finally made clear to me how Sinhalese and other artists through the years had been able to maintain such uniformity of form in spite of the fact that each Buddha was made on its own. 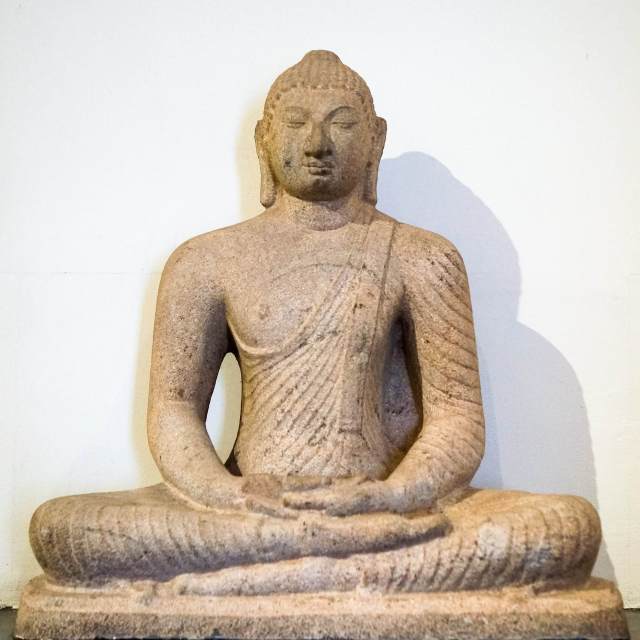 diagram of Caturmana system applied to a seated Buddha figure

I returned to the entrance lobby and the seated Buddha with a newfound appreciation of the “science” behind drawing the Buddha out from a large chunk of limestone.

And that was my quick tour of the National Gallery – not a long one and certainly not one that did justice to all the rooms – but it had been worth the visit.  I should mention that the entrance fee was 500 rupees and there was in all likelihood an additional 100 rupee fee for camera privileges.

It was followed by a late afternoon walk through Viharamahadevi Park up to the Town Hall, passing the large modern take of the seated and gilded Buddha on the way.  Odel’s Department Store was still open so I dropped in and did some gift shopping. It had been a very enjoyable day in Colombo and I was glad that I had left three days in my travel plans to explore parts of the city.  See below for some other related Sri Lanka posts:

The Ruins of Ancient Anuradhapura – Part One

This entry was posted in Sri Lanka. Bookmark the permalink.