Our tour of the Abhayagiri Monastery precinct done, we headed directly from one stupa to the other – from the Lankarama for the Thuparama. I will admit that on reviewing my pix in my Lightroom image processing app, I did not initially notice the transition and wondered  why I had thirty shots of the Lankarama!   Closer examination of the pix of the two stupas cleared up a classic Duh! moment!  In case you are not coming from Part One of this look at ancient Anuradhapura, here  is what the Lankarama just north of the Thuparama looks like:

There are three circles above the base of the stupa; there are few shrines surrounding it and no pillars scattered about on the platform.  Meanwhile, the Thuparama looks like this – 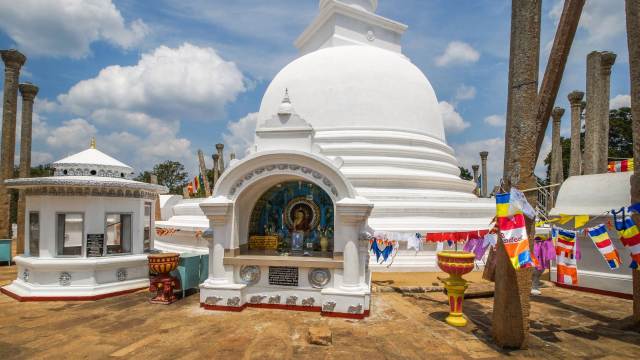 The root word “thupa” is the Pali equivalent of the Sanskrit “stupa”; as the info board below states, the Thuparama was the first of the brick relic mounds built in Anuradhapura and it is believed to hold the right collarbone of the Buddha.The Mahavamsa, literally “The Great Chronicle” of the ancient kingdom of Anuradhapura, draws a direct connection between the location of the Thuparama and the Buddha himself. In the very first chapter we read that on the Buddha’s legendary third and last visit to the Blessed Isle of Lanka –

…the Great Sage proceeded to the site of Mahameghavanarama, which today we call Anuradhapura. The Savior, along with his disciples entered into meditation, and thus consecrated the site where the sacred Bodhi Tree would be planted during the reign of Devanampiyatissa. Likewise the place where the stupa of Thuparama in Anuradhapura would one day be built. 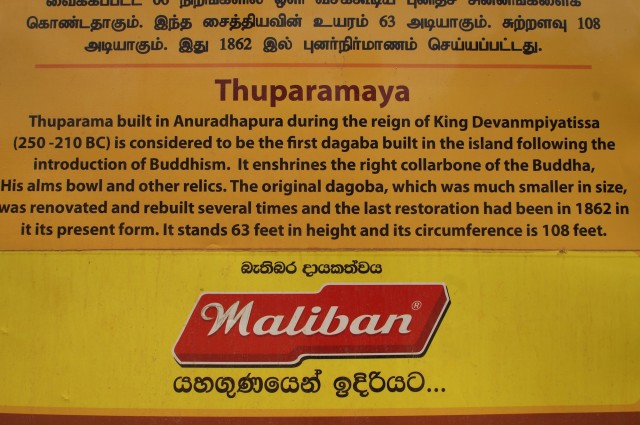 We were now in the part of ancient Anuradhapura called the Mahavihara. The “Great Monastery” was the first of the three monasteries which flourished in the city thanks to the patronage of the ruling dynasty; the monks of the  Mahavihara also promoted the most conservative interpretation of Buddhist doctrine. As in the Christian world,  doctrinal rigidity  would result in some leaving the Mahavihara and setting up a more liberal approach to the Dharma. It was to the area just north of the city – at what would become Abhayagiri  – that these dissident monks went to found a new monastery.  Just as interesting to ponder and appreciate as the physical ruins of Anuradhapura is the intellectual architecture of the various “takes” on Buddhism that were debated here. Visiting scholars would take in the discussion  and export it to their homelands,  from China and Japan to Thailand  and Kashmir.

The vatadage is thought to be an architectural structure unique to Sri Lankan Buddhism and while the wooden roof has not survived, the pillars do give a clue as to how it would have worked.  It seems likely that the pillars that we see standing were put back up by restoration crews in the past hundred years. 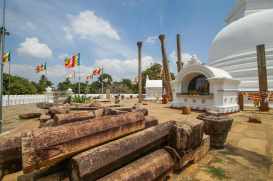 Thuparama pillars on the platform – evidence of a former vatadage 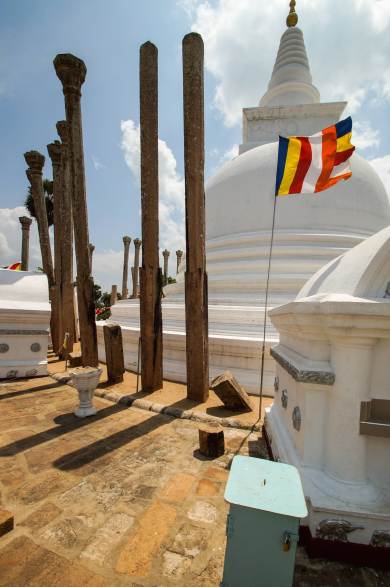 Fluttering all over the Anuradhapura site – and indeed all over Sri Lanka – are colourful flags characterized by six vertical bands. The five colours and the composite of all five colours symbolized in the sixth band are said to represent the six colours of Siddhartha Gautama’s aura which came from his body at the moment he attained Enlightenment and became the Buddha. This Wikipedia article provides images of the flag as it is used in various other Buddhist countries.

offerings in front of Thuparama shrine shown in the image below

Sometime around 12:30 Mahinda pulled up to a roadside stand where we had a cool drink and a quick rice and curry. I was definitely starting to sag a bit thanks to the heat – but twenty minutes later we were on our way to the #1 attraction of the ancient city – the Sri Maha Bodhi or Sacred Bodhi Tree.

a rice and curry stop at the junction

My  approach to the Sri Maha Bodhi was from the walkway that runs down the middle of the map (see below). Leaving a visit to the stupa on my right for my return, I headed down the path.   When you are almost at the entrance to the Sri Maha Bodhi, you pass by (on the right) the ruins of what was once supposedly a nine-storey monastic residence housing a thousand monks and attendants. Given the bronze roof it used to have, it is called the Brazen Palace.  All you see now are pillars, lots and lots of pillars!

the Brazen Palace – some of the many pillars

The walkway ends at a guardhouse/entry gate – some residual nervousness about Tamil Tiger bombers in evidence here? –   and into the grounds of the Sri Maha Bodhi temple complex I went. In seeing the actual Bodhi Tree – believed to have grown from a shoot taken from the very tree under which Siddhartha Gautama became the Buddha – it would undoubtedly help to be a devout Buddhist. Otherwise, it really is an underwhelming experience. As the pic two down show, the actual tree is inaccessible behind gates and walls.

My experience in Bodh Gaya underneath the original – or not – Bodhi Tree was completely different, a most definitive feeling that I was somewhere significant.  The fact that there were three hundred Tibetan Buddhist monks there that evening chanting their sutras may have had something to do with it. Still, in the context of Sri Lankan Buddhism, this is Ground Zero, the very centre of their Sinhalese Buddhist faith and should be taken as such. 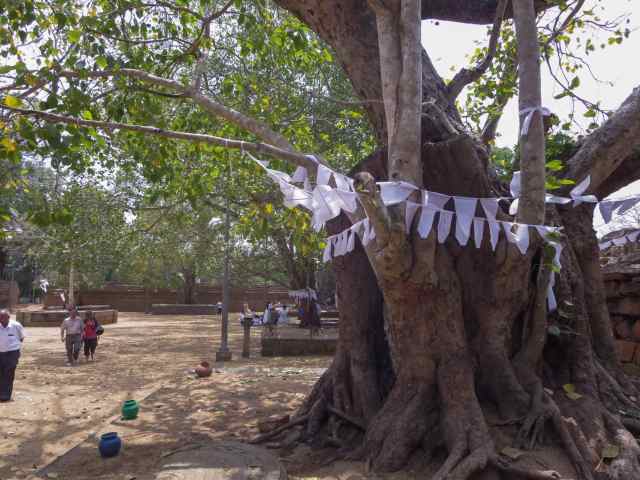 Temple and The Sri Maha Bodhi 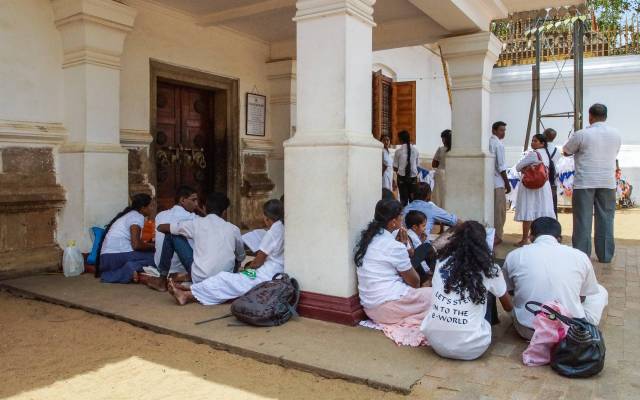 flower offerings at a shrine at the Sri Maha Bodhi temple 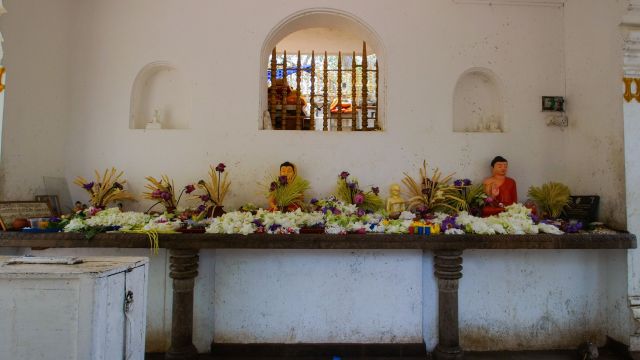 close up of Buddha statue at Sri Maha Bodhi Temple 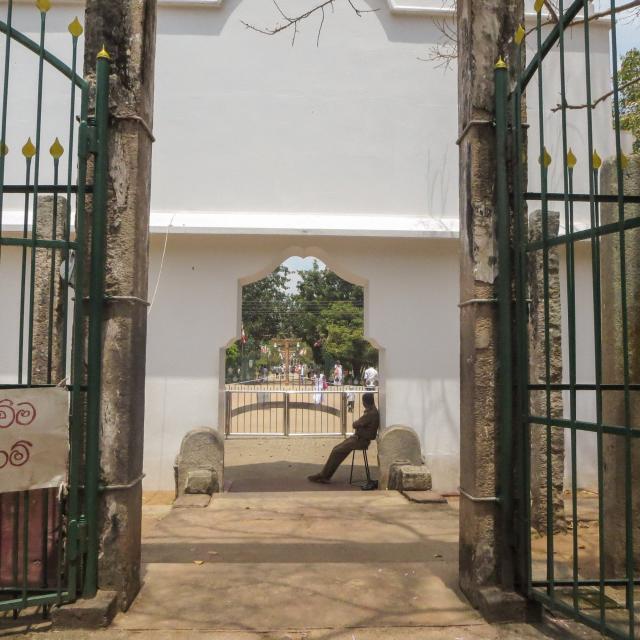 Guardhouse – entrance (and exit) of  the Sri Maha Bodhi complex

My visit to the Sri Maha Bodhi complex done, it was back down the walkway to the Ruvanvelisaya Dagoba that I had walked by on the way up. From afar I could already see the workers on the steeple of the dagoba, clinging to the bamboo ladders. 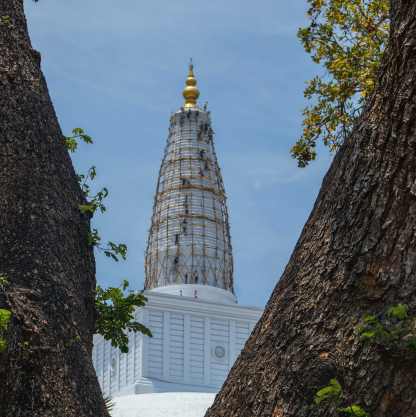 watching the workers on the steeple of the dagoba 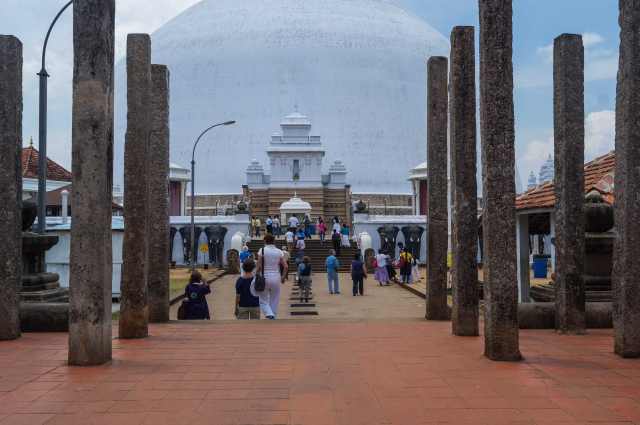 approaching the Ruvanvelisaya Dagoba base terrace

As I watched them scamper down the ladder – no safety harnesses, no shoes, no nothing to stop a fall – I held my breath.  It brought to mind an image from the day before when I had come up to Anuradhapura from Colombo on the train.  At one of our stops I glanced out the window to see a rail crew doing some construction; all the workers were wearing flip-flops as they did the shovelling and hauling away of some gravel.  The only guy wearing shoes looked like the boss!  And now these guys on the stupa using the same techniques that their ancestors had two thousand years ago as they came down the bamboo ladder.

one last look a the Ruvanvelisaya Stupa 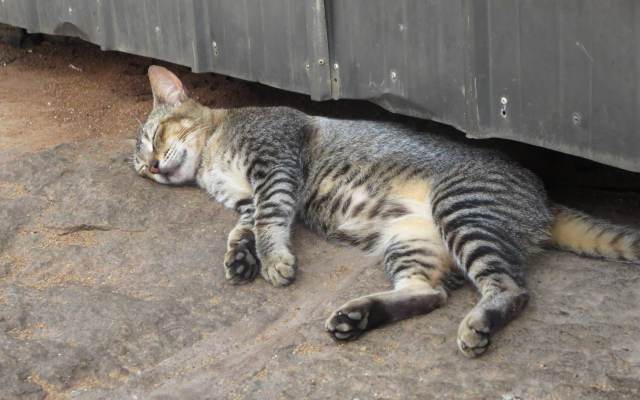 By this time I was ready to join the cat in the pic above for an early afternoon nap.  But wait, there’s still a bit more! Off we went in Mahinda’s gas-powered chariot to the next “must see” site.  It would be our sixth stupa of the day – the Mirisavatiya Dagoba about a kilometre to the west of the Sri Maha Bodhi Complex I had been at an hour before.

pathway leading to the Mirisavatiya Dagoba

the Mirisavatiya Dagoba up closer

Leaving our sixth stupa of the day, we now headed south to the  Vessagiriya Monastery area, where massive boulder  formations provided cave-like shelter used by monks who once lived there.  Also hinted at in the surrounding ruins were the other buildings associated with a monastery –  an image house, a refectory, and a dormitory.  In the pic below you can see Mahinda’s red tuk-tuk in the shade on the top left corner of the image.  Meanwhile,  it is 1:30 and I am being fried on top of the rock formations that overlook the site.

some of the boulders at Vessagiriya 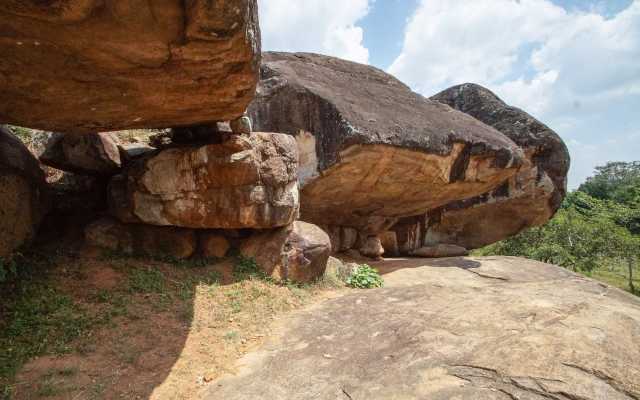 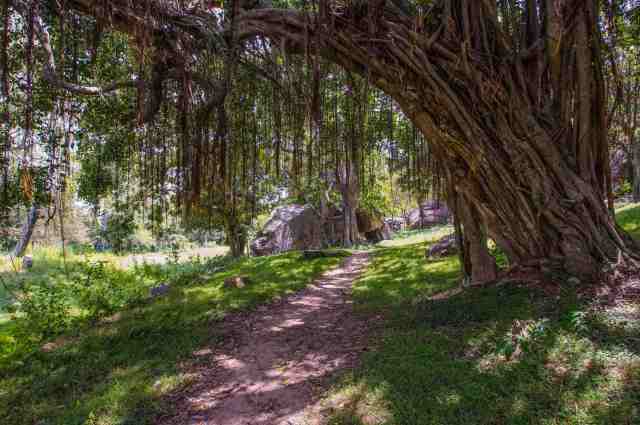 Below are a couple of rock carvings you see from the steps to the entrance of the rock temple. they are carved into the rock face above the pond. Both exhibit a certain playfulness and naturalness.  According to this source, their style shows  “the influence of South Indian Pallava sculptural art of the seventh century”.

carving of a seated man with a horse at Isurumuniya Vihara 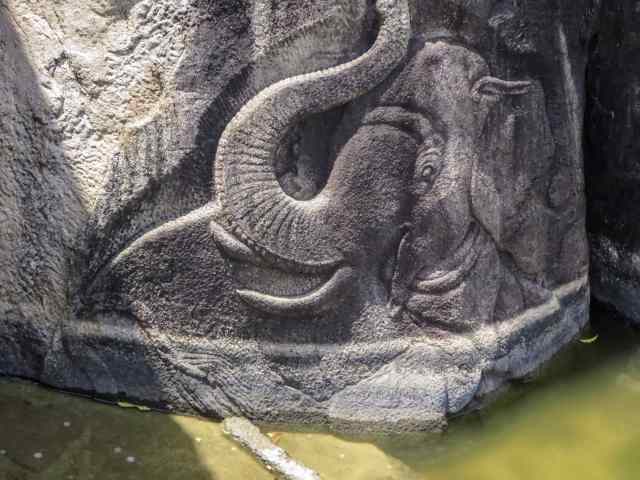 The two following pix are all that I took in my brief visit to the Vihara. I didn’t even think of framing a decent shot of the admittedly modern stupa now found at the site. “Stupa-ed out” is the nonsense word that comes to mind to describe how I was feeling. I walked back down from the viewing platform by the stupa to the parking lot where Mahinda was waiting and really without knowing if there was yet another site to head to said, “That’s it for today, Mahinda. Let’s head back to the guesthouse.” 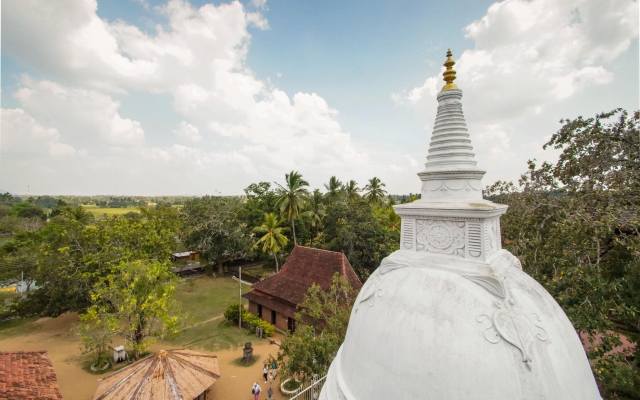 my last stupa shot of the day – Isurumuniya Stupa

We were not the only ones who were done.  As we were heading back we passed groups of students heading home.  And each time we can to a major intersection there was yet another in-your-face billboard reminder of the existence of Sri Lanka’s “President-For-Life”. I am still waiting for news that, like the kings of old, he has commissioned the construction of a new stupa.

the inescapable El Presidente on two billboards at one intersection

While I was beat at the end of it, the day had been worth it. All told, I spend $50. US for the ticket and for Mahinda’s services for the six hours he drove me from site to site. He had quoted me $20 US; with the $5. tip he ended up getting a bit more. it would have been nice if the day had been cheaper – or free! – but it isn’t so I just accepted the fact and went from there.

Now budget travellers will undoubtedly balk at the notion of spending $50. for the day’s sightseeing. They can walk if they want but given how I felt – and I was being driven around – i cannot imagine how one could see even a half of what I did by foot. The bicycle is another option – bike rental may be in the $7. to $10. range. A bit more and you have a tuk-tuk!

And, as I mentioned in Part One, you could try to see the site without paying. You would have to avoid certain obvious sites like the Sri Maha Bodhi and some of the stupas – and you would have to plead ignorance or be defiant or indignant way more than I would want to waste my energy on.

My quick one-day visit to the site of the ancient city was an excellent introduction to the glory that was ancient Anuradhapura. The level of technological accomplishment  attained by its inhabitants puts it on the list of great cities of the ancient world.  I also left curious about the intellectual ferment that on occasion led to monks battling monks about what the Buddha really said.  At one and the same time,  I was reminded about how little I – Mr. Ancient History teacher! – know and how wrong, in the case of the nature of Sri Lankan Buddhism, I was on what I thought I knew. Just wait – I will soon be learning that I am wrong on the pompous Mahinda Rajapaksa too! Let me know if I am…

For other posts on sites in the “Cultural Triangle” see also:

Before Machu Picchu Was, There Was Sri Lanka’s Sigiriya

Colombo’s National Museum: Some Of What You’ll See

Up The Steps Of Sri Lanka’s Mihintale (Mahinda’s Hill)

This entry was posted in Sri Lanka. Bookmark the permalink.