Almost at the very centre of the island of Sri Lanka – at the junction of the road between Colombo and Trincomalee and the one between Kandy and Anuradhapura – is the crossroads market town of Dambulla.  (Click here for a google interactive map.) These days locals know it for its sprawling and thriving vegetable market – but rooted in the past is another claim to fame.  To the south of the market is  the 170 meter granite outcrop whose recesses house some of the finest Buddhist statuary and murals to be found in Sri Lanka and, in fact, in all of south-east Asia. 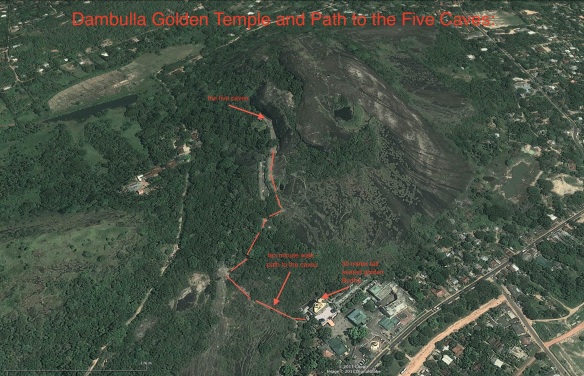 a satellite image of the granite outcrop and the caves

Images enlarge with a click; all blue text leads to a new page with more info.

This makes a stop at Dambulla all but mandatory for anyone exploring Sri Lanka’s so-called “Cultural Triangle”, the term given to those sites which preserve elements of the great Sinhalese kingdoms of the island’s past. Dambulla sits in the middle of the triangle formed by Anuradhapura, Polonnaruwa, and Kandy and  its development was influenced in turn by each of these three points on the triangle.

A visit to the Dambulla caves takes you first to the Golden Temple which sits at the bottom of the path leading up 150 meters to the western side of the outcrop.The structure dates back to the 1990’s; critics have not been kind and have used words like “ugly” and “kitschy” to describe the over-the-top architecture. 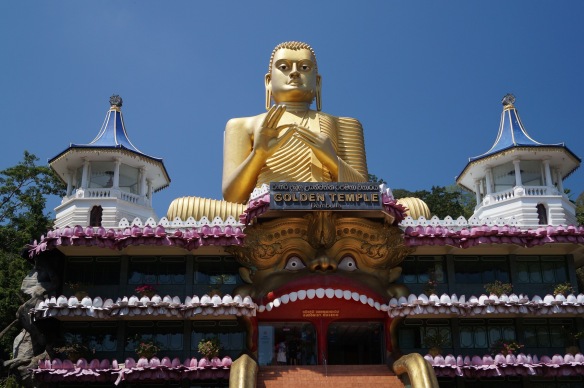 To the right of the temple one finds a row of monks approaching the gigantic seated Buddha, some with offering in their hands.

part of the line of monks approaching the Buddha

monks filing to present offerings to the Buddha

The Buddha statue up close

While there are larger Buddha statues elsewhere in Asia, the plaque nearby lets us know that this one is the largest statue of the Buddha in the Dhyana Chakra mudra or position. Kitsch or not, it does have a certain power.

There is a museum in the building on top of which this Buddha sits but I was keen to see the main attraction – the caves – so I gave it a pass.  It really does not get positive reviews in the various guidebooks though I should perhaps have given it a few minutes to see for myself.  Later I would visit the Buddhist Museum a kilometre down the road to see some impressive recreations of the murals of Dambulla and many other Cultural Triangle sites.

The pathway up to the main attraction is on the left side of the temple. It is an uphill walk but ten minutes and a stop or two on the way to appreciate the view and it gets done.  On the way vendors will proffer different items they feel tourists are looking to buy – the stand with its collection of brass statues  below was but one of many.  I really should have taken a pic of the Bob Marley/Rasta items that one dreadlocked entrepreneur had available. Clearly there is room at the Buddha’s table for all!

tourist souvenirs on the path to the caves

approaching the entrance way to the Dambulla Caves

Just before you go through the entrance gate in the image above, you take off your shoes and hand them to a shoe guardian. (He will expect a few rupees later on!)  Some westerners do leave on their socks. Depending on the time of day, the rock surface can be quite hot and make stepping uncomfortable.

Now you are through the gateway and almost at the “caves”.  Having visited the site twice – once at about 9:30 a.m. and once at 3:30 p.m. – I can tell you that it is much busier in the morning than it is in the afternoon thanks to the many school groups and busloads of tourists.  The shot above was taken in the morning; the one below in the aft! 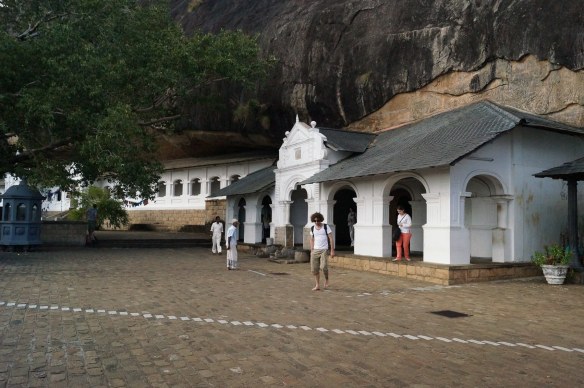 You will also note that the entrance(s) to the cave are protected by a covered verandah which was built in the 1930’s.  The map below will give you an idea of how the cave area is set up.

Apparently the site was originally one large cave formed by the rock overhang.  Over time partitions were put in to create the five “caves” illustrated in the map above. The site began its history as a temple when a ruler of Anuradhapura sought refuge here for a number of years, after having lost his kingdom to invading Tamils. When he regained his territory years later, in thanks he had the first temple built here about two thousand years ago.  Over time rulers from Polonnaruwa (in the 1100’s C.E.) and Kandy (in the 1700’s) would allocate artists and money to the site to show their devotion to the Buddha and to make more visible their own power and success.

covered verandah in front of the Dambulla caves – late afternoon and no one is here!

Since Caves 2 and 3 are the most stunning of the five and Cave 1 is the least crammed with statues and murals, a good way to go about seeing them is in reverse order. The following picture journey will follow this sequence.

Once a store room, the newest and smallest of the five caves contains statues constructed of brick and plaster, as well as murals. The main figure is a ten-meter long reclining Buddha. This position, known as the  parinirvana pose, shows the historical buddha, Siddhartha Gautama, on his deathbed at the moment of his death.  It is a oft-repeated pose in Sri Lankan Buddhist sculpture and painting.

the head of the reclining Buddha figure 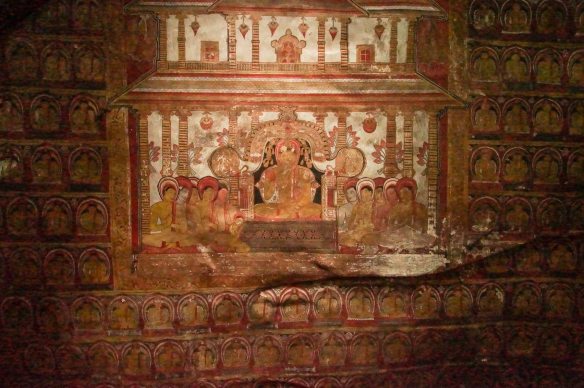 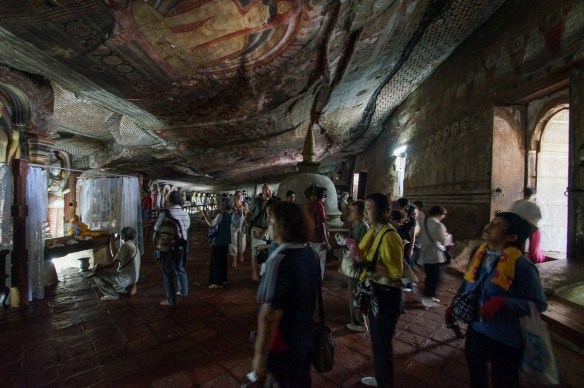 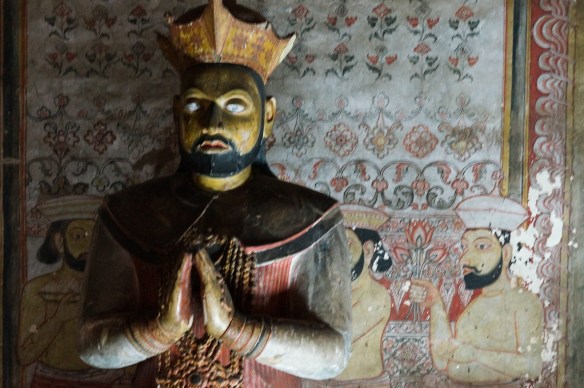 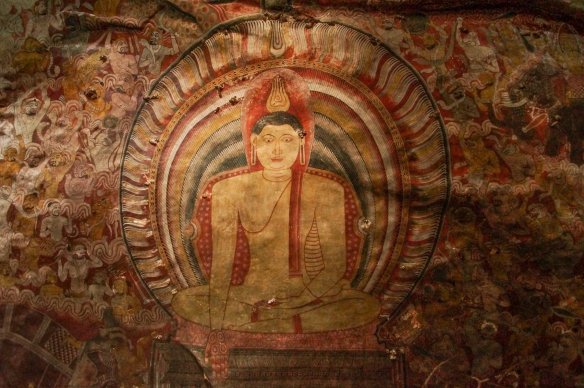 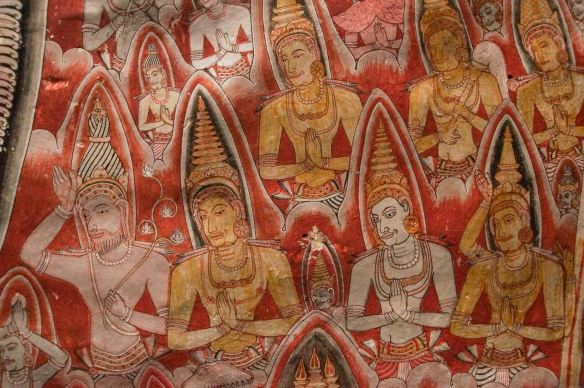 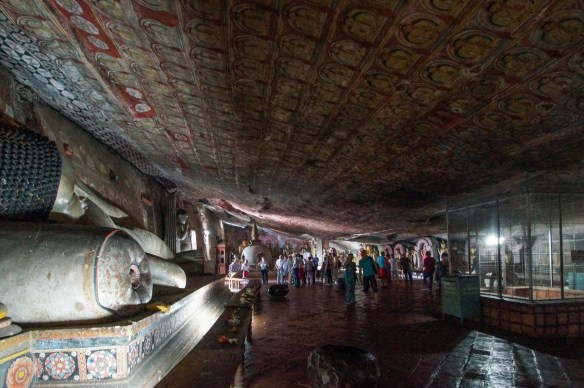 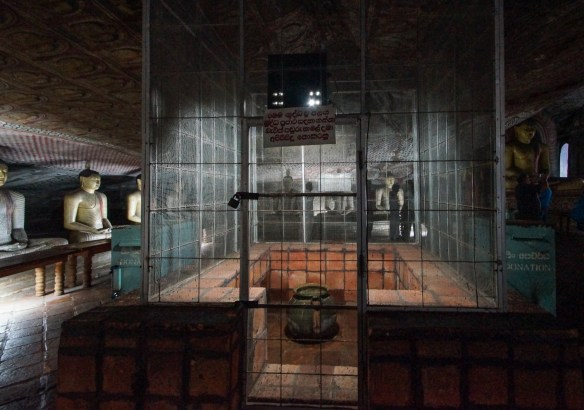 Dambulla Cave 2 Buddha in meditation mudra with cobra head above 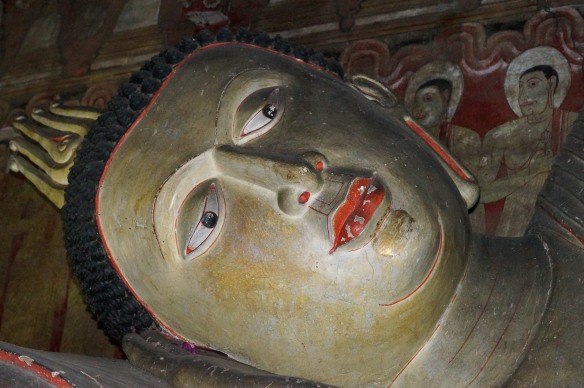 Cave 1: Devaraja Viharaya (Temple of the Lord of the Gods)

entrance to Cave 1 with its reclining Buddha figure 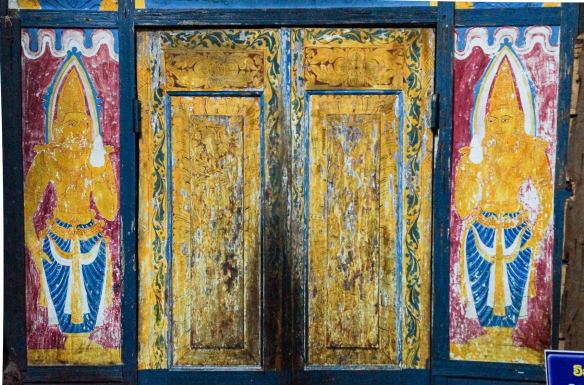 Dambulla Cave 1 – the head of the reclining Buddha

Dambulla Cave 1 the feet of the reclining Buddha 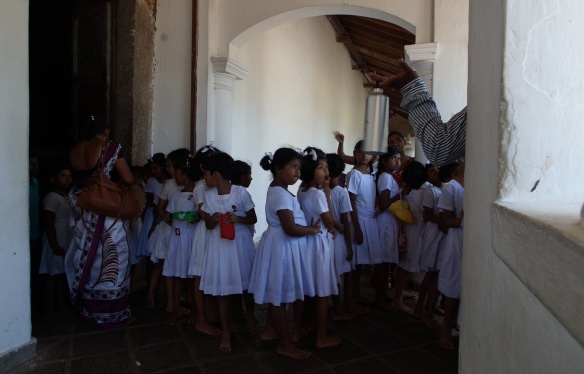 Dambualla Cave Temple – a view of the covered verandah 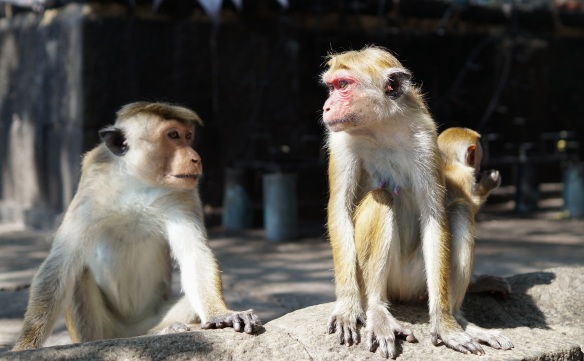 Dambulla Cave monkeys on the walls – bhikkus in disguise?

I found the The Rough Guide To Sri Lanka to provide the most detailed and richest detail about the various cave temples of the Dambulla complex.  The following link (click here) will give you an idea of the discussion. Since the cave temples are on the United Nations list of World Heritage sites, the unesco site has a dedicated page here.

Trip Advisor has the cave temples listed as Things To Do #1 (and #3 under a different name!) with hundreds of comments and evaluations. (Click here.) The overall score is in the 4.5 out of 5 range – definitely a thumbs up!

Next Post: Before Machu Picchu Was,  There Was Sigiriya

This entry was posted in hiking/trekking, Sri Lanka. Bookmark the permalink.