We left downtown Toronto at 6:40 a.m. and by 11  we were at the reception desk at Hartley Bay Marina.  Another hour and we’d be unloading our canoe and gear at the dock at the Shuswap Camp in Sucker Creek Landing, ready to slide our canoe into the water of Lake Nipissing’s West Bay. 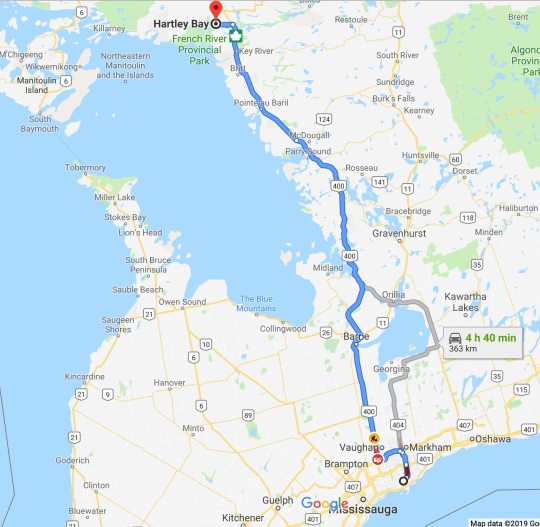 Compare that to the previous year’s Cliff Lake/Lake Nipigon trip which had started with a 1600-kilometer drive over two days capped off with a thirty-minute bush plane ride to get to the put-in point!

This year we’d also be spared the two-day return journey to southern Ontario!  Instead of last year’s four solid travel days, this year there would only be two easy half-days.  Nice!

It is a one-hour drive from Hartley Bay to the Shuswap Camp at Sucker Creek landing. Our shuttle driver Mike – an old guy, maybe 70  or so (i.e. even older than our 65 and 68!) – hopped in our car and off we went.

It became clear that our passenger was quite knowledgeable about the French River area and he certainly had some stories to tell.  I asked him if he did odd jobs for the Marina, thinking that it was a good way for him to make some extra cash in his retirement years. He admitted that he did and then added this kicker in a matter-of-fact way  – “Actually I’m the owner.”   Mike Palmer!

The Palmer family has been running the Marina since 1952. According to their website, its original version was actually a restaurant and welcome center for rail passengers arriving from down south.  The Palmers had started their business a bit more than a decade after Mike’s father first came to the Hartley Bay area in 1939.  The rail track that passes by brought in camp owners and other visitors from southern Ontario at a time when the road did not yet exist. These days Mike’s son James carries on the family business – but the restaurant is no longer a part of it. Now they’ve got five cottages for rent and provide a full marina service for boaters. Canoe rental and route advice are also available for those planning a canoe trip.

Mike dropped us off at the water’s edge by ShuswapCamp and then drove our vehicle back down to Hartley Bay.  After we loaded the canoe, we headed up to the restaurant for some lunch.  Bad timing meant that there would be a bit of a wait as the cook tried to catch up to an order from a group of 12 seniors whose ATVs we had noticed parked outside. There were also – to no surprise – no vegan options on the menu so while Max munched on some toast I had a cup of coffee with the last of the soy creamer I had brought up from T.O. We ended up postponing lunch until after a half-hour of paddling when we came to a shady spot to set up our Helinox chairs.

an overview of the Shuswap Camp

a look back at Shuswap Camp 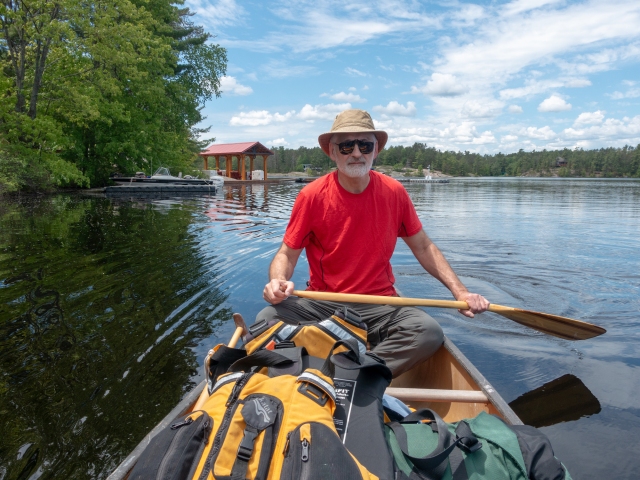 the mandatory trip photo of Max, the stern paddler!

Just east of Shuswap is another lodge – Saenchiur Flechey.  While the first one uses the “up North” word “Camp” to describe itself, the latter bills itself as a “Resort”.

It was a sunny and windless afternoon and, as the overview map above shows,  we paddled by one little island after another on our way to the day’s target, Lafleche Point. I had made use of the Google Earth satellite view to get a preview of the area and it looked promising. I focussed on the area at the west end with the exposed rock outcrop and figured we’d find something there.

After checking it out, we ended up paddling back around the point to the Lake side and setting up our tent in a nice sheltered spot surrounded by some tall pines – and one that had been blown over in the past year or so.  It makes for a “good enough” campsite at the end of an easy first-day start.  The next morning we would find out that we had stopped 400 meters too early and that Lafleche Point had far nicer views and tent sites.  That’s how it goes sometimes!

end of the day on Lake Nipissing – CS 01

Day 1 was in the books – from 7:00 a.m. driving up the DVP near Eglinton to 4:00 p.m. putting up our tent on Lake Nipissing.  Quite the transition!  No paddlers sighted but a couple of motorboats on West Bay.