Canoeing The French River From Top To Bottom: Day 2 – From Lafleche Point to Canoe Pass

Day 2 – and our first full day on the water.  Our goal for the day was to paddle east on Lake Nipissing to Canoe Pass and then head south to the first decent campsite we found.  Conditions were ideal – almost no wind and mostly sunny all day as we paddled along the south shore of West Bay and then east past a string of islands until we came to the single largest island in the lake, Sandy Island.

As noted in the Day 1 post, less than a kilometer from our Day 1 CS we found a much better one at Lafleche Point itself. About an hour later we would check out another site as we were paddling through Hay Narrows, the entrance of West Bay. 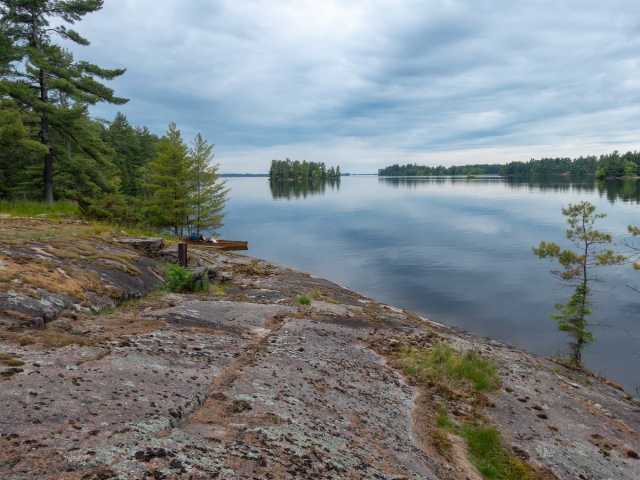 Initially curious about an iron post embedded in the sloping rock face, we walked up to see the concrete foundation of what was once a camp.  Other than the post and that foundation, the site was remarkably clean, with little of the usual debris you often see at abandoned sites.  It would make a good campsite for multiple tents.

the concrete foundation of a camp on West Bay Lake Nipissing 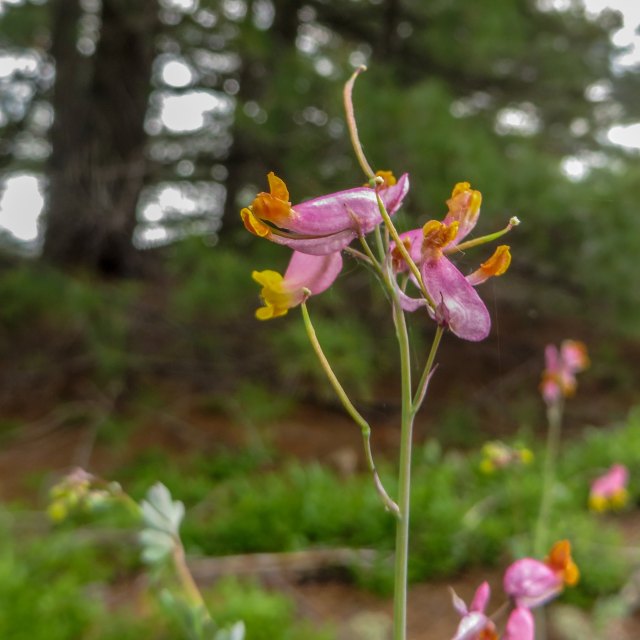 Max gets in his flower shot of the day! 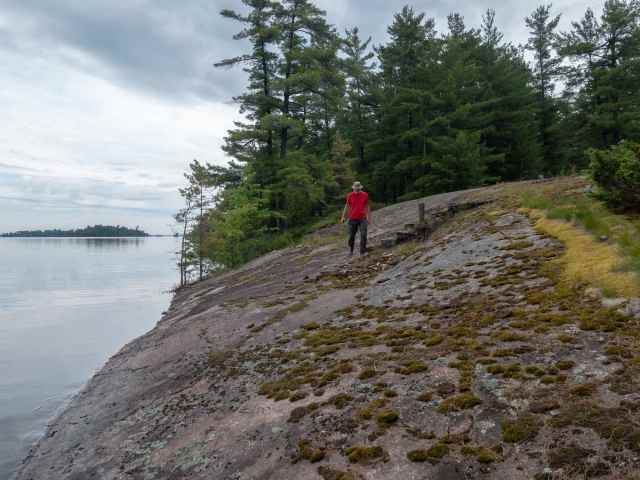 site reconnaissance over – Max on his way back to the canoe

Ten minutes after passing by Jennings Island (top left on the map below), we pulled up on a point and set up our Helinox chairs in the shade of some pines. Out came the butane stovetop and butane canister – it was time for our usual Thai soup and peanut butter on Wasa bread lunch!

An hour later, we were back on the water and, once we passed by Wigwam Point, paddling along the south side of Sandy Island.  While we were struck by the number of camps/cottages, few of them seemed to be in use. One motorboat did come ripping by and was the object of a curse or two as the driver seemed oblivious to the impact of the wake he was leaving for us to deal with. We also saw our first paddler – a kayaker from one of the camps out for an afternoon paddle.

[We would not see any other canoes or kayaks until Day 10 when we approached the Washer Woman at the top of Black Bay!  As for motorboats – we saw perhaps ten over the following ten days. It was pretty quiet on the French, just the way we like it.]

In his study of Ontario pictograph sites, Discovering Rock Art, Thor Conway recounts a story he heard from an elder named John Fisher from the Garden Village reserve in the early 1980s.  It involved an ambush by his Nipissing ancestors of a group of invading Iroquois during the Iroquois-Algonkian War of the mid-1600s. Supposedly, three to four hundred Iroquois were killed in the surprise attack while they slept. It is not clear on which exact island the ambush and ensuing massacre took place; however,  it was in the vicinity of the Sandy Island we were paddling by.  Fisher says he visited the site with his father when he was quite young and said he saw bones and skulls laying on the ground.

While Frank’s Bay at the east side of the entrance to the French River system is known to have been the site of a pre-1600s Nipissing summer tribal gathering site and has seen archaeological excavation, none of the literature makes reference to this incident.

I guess it comes down to how reliable the storyteller, John Fisher, was about an incident that happened 330 years before he recounted it and which he is telling when he is in his 80’s.  As Conway quotes him –

And they [the Nipissing warriors] got their clubs. And they’re [the Iroquois raiders] all sleeping, the others.

And they clubbed them. Oh, yeah.

They killed them all. And then….I didn’t know anything about that very much because they used to talk about it. But I never paid attention, you know. When you’re young, you don’t bother to listen or anything like that. [Conway 117]

It may also be that the details of another story about Anishinaabe-speaking warriors defeating a large Iroquois war party have been changed to fit with local realities, in the same way that various traditional Anishnaabe communities adapted the creation myth to fit their local lakes and rivers.

Here is an account from the 1790s by John Macdonell that mentions a large Iroquois war party.  The island is located in Lake Superior and not Lake Nipissing –

The next day we would visit the single largest pictograph site on the French River and it too would be connected to a story about Iroquois raiders.

the west end of Sandy Island

Canoe Pass is a narrow 600-meter channel along the west side of Burnt Island.  To us it represented the end of Lake Nipissing paddle and the start of our trip down the French River system to Georgian Bay.   At both ends of Canoe Pass are signs telling motorboats to reduce their speed. Given that it was a Thursday afternoon in mid-June we were not expecting much traffic!

At the south end of the channel, we stopped to examine more closely the vertical rock face on the west end of Burnt Island.  While the hope is always that we will find a pictograph or two, the fact is that they are actually fairly scarce on the French and, in any case, the entire surface of this particular rock face was covered with moss and lichen.  So – nothing to see; move along! 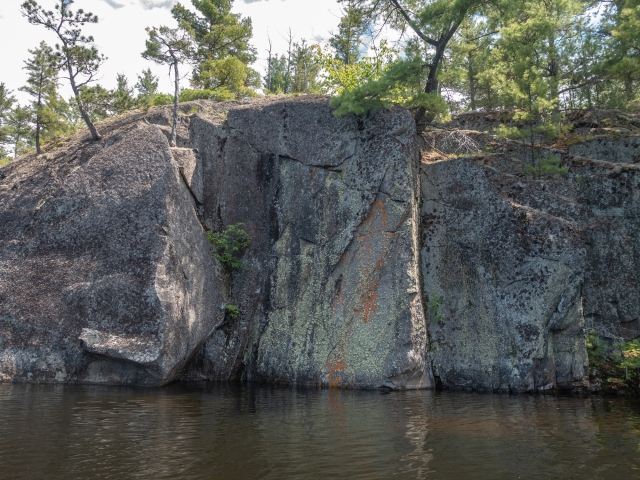 It was only 2:30 when we came through Canoe Pass. Since we wanted to keep our visit to the Kennedy island pictograph site until the next morning, we switched into campsite hunting mode. The Friends of French River map has all of the French River Provincial Park campsites indicated; we were close to a couple of them – 104 and 105. 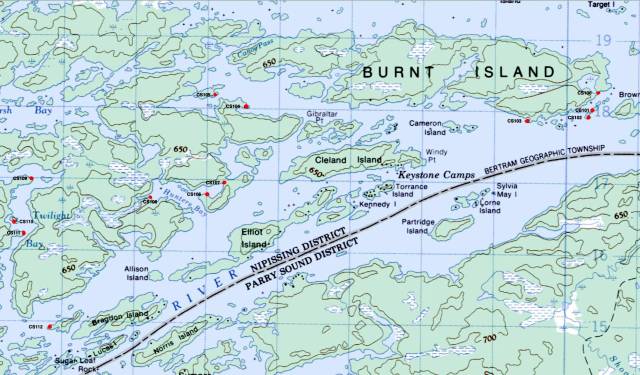 First, we checked out campsite 105; it looked fine. But just to make sure we didn’t pass up on an even better one, we did paddle over to CS104 to see what it was like.  A quick look and it was back 500 meters to the first one!

By 3:30 we had both our tent and the bug tent up and we were chillin’ on the rock outcrop on the water’s edge with our freshly brewed cups of coffee.

Day 2 had been an easy day with no drama; we were looking forward to the next morning’s visit to the Kennedy island pictograph site and then the 15-km. paddle down to the Portage Channel hydro-electric dam.  It would be there that we would face the trip’s single longest portage, the 600-meter carry around the dam.

Next Post: Day 3 – From Canoe Pass To Below The Portage Channel Dam