Topo View And Satellite View of the Day’s Walk:

The first part of the day involved a gradual ascent to Jare La, a two-hour walk up the valley you see in the satellite image below.  Once we got to the pass we relaxed for a half-hour, taking in the somewhat clouded-over  views.

From Shomuthang To Jare La:

horses returning to Shomuthang camp from the meadows above 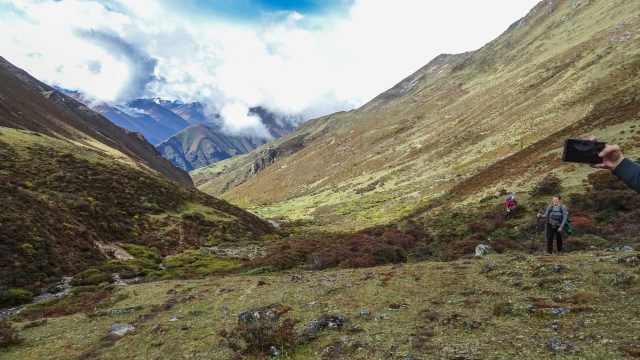 an hour into our walk to Robluthang from Shomuthang

flowers on the Himalayan hillside above Shomuthang

looking back at the terrain we had covered from Shomuthang 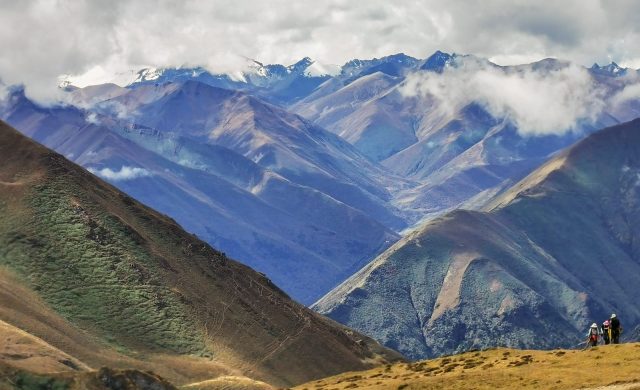 trekkers approaching Jare La on the way to Robluthang

Jare La – on the way to Robluthang

From the pass, we walked down on a fairly decent trail, at first a rather barren and open and then more forested and muddy as we approached the valley floor.  We would stop at a thang (i.e. meadow/flat spot) to have lunch before moving on to the log bridge crossing the Jholethang Chhu. 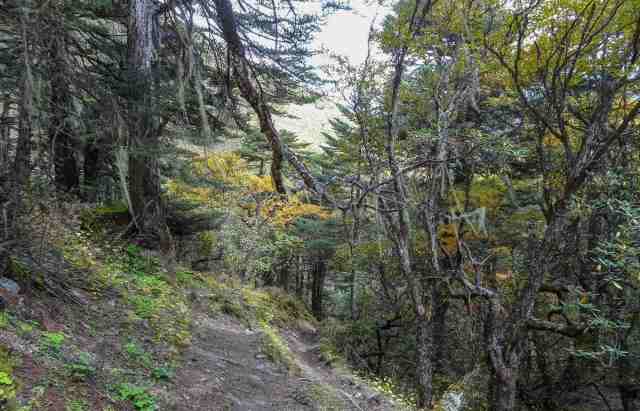 dirt trail on the forested slope of Jare La

lunch down on the side valley floor  near the Jholethang Chhu

Lunch was a bit of a wait since we arrived at the spot before the lunch crew did! When the others were served tuna with their rice, I asked Kunley if he could provide me with some cashews as a substitute.  []This would be the beginning of adaptations which would leave me in better spirits and in better shape to deal with the caloric requirements of the trek!]

After lunch, we moved on towards the Jholethang Chhu and the extensive grazing land along its banks.  A somewhat precarious log bridge over the stream and then we were on the east side of the river and standing at the north end of extensive yak grazing grounds. 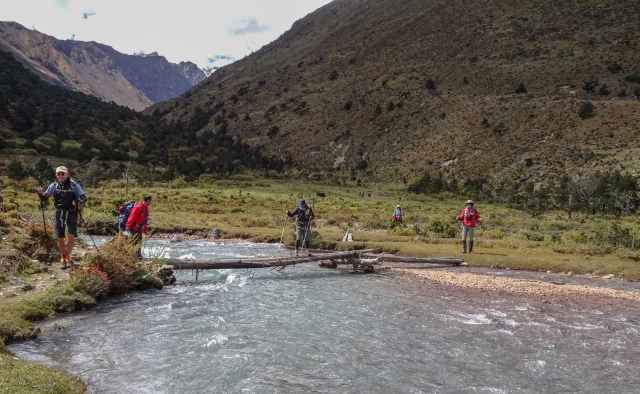 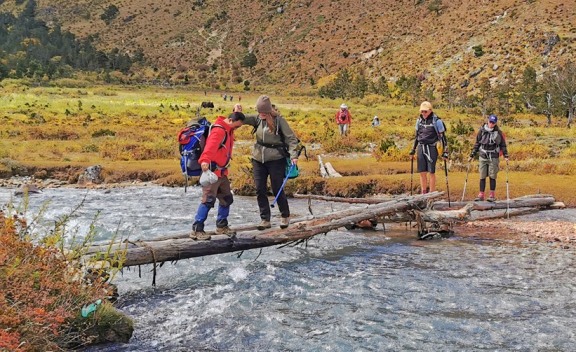 The image below shows the view looking north up the valley which comes down from the Tibet border ten kilometers away.  Our Robluthang campsite was a couple of kilometers up this valley. In the image below, the beginning of the trail is visible on the right-hand side. Steep at first,  it eventually levelled out to a gradual ascent to our campsite, a fair-sized meadow or thang.  (Click here to access a Google Earth view of the neighbourhood!)

looking north up the Jholethang Chhu to the Tibetan border

Of this valley the Lonely Planet guide to Bhutan notes this:

Herds of takin migrate to this valley in the summer and remain here for about four months. Takins are easily disturbed by the presence of other animals, including humans….The valley has been declared a special takin sanctuary and yak herders have agreed not to graze their animals in the valley while the takin are here.  [Lonely Planet. Bhutan. (6th Edition) p. 188.]

No takin here when we passed through but a dozen yak grazing,  as well as a yak herder’s tarp shelter off image to the right closer to the river flowing down the valley.

Robluthang campsite – one of a few choices for trekking groups 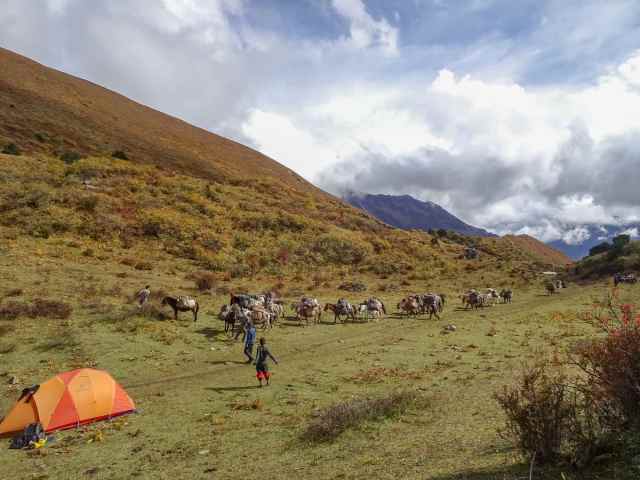 some of our horse train coming into Robluthang campsite

horses coming into Robluthang camp in the afternoon

Supper – for the second night in a row, I was able to stuff myself!  More aloo gobi, the curried Indian potato and cauliflower dish. And on top of that, a Bengali brown lentil dal-like watery stew to pour over the rice which made it so much more enticing! But wait – there’s more!  The cook had prepared a vegetable soup without an animal-derived broth or milk product in it!  Trek soup is yet another way to make sure the clients are staying well-hydrated; I had two bowlsful.

Those doubts I had earlier about not having the energy to finish the trek! Well, they had been allayed thanks to the past two days’ supper fare.  For the rest of the trek, the cook would prepare a special soup for the two vegan trekkers and I would get bowls of cashew nuts as a substitute for whatever meat dish the others were presented with.  Things were looking up!