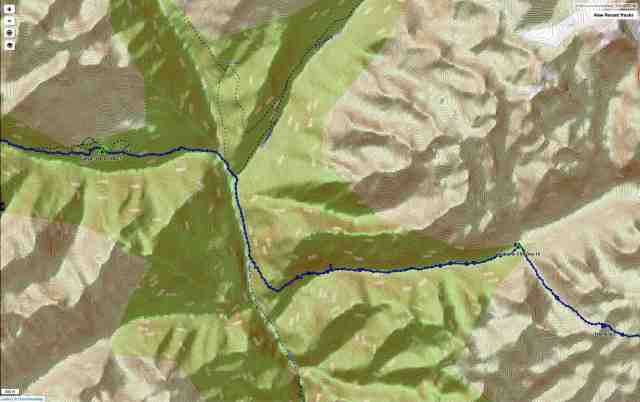 Note: elevation is in feet, not meters!

For me, this day would prove to be the most difficult of the trek. I was really dragging my butt by the end of it and my legs felt like lead! Maybe it had something to do with the 600-meter drop in altitude as we left Laya and walked down the trail on the east side of the Mo Chhu. This was followed by regaining all 600 meters and yet another 400 by the time we got to our campsite at 4220m halfway up the Rodo Chhu.  Whew! 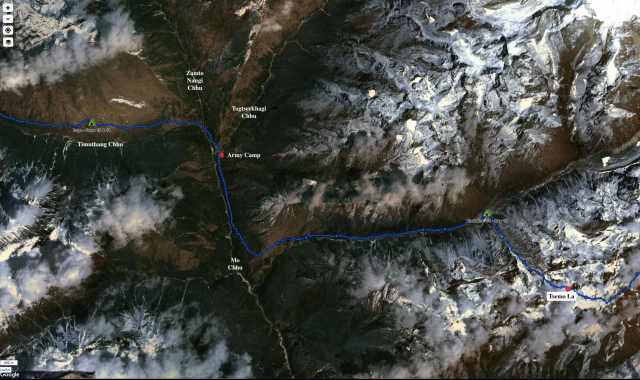 We left Laya shortly after 8:00. The weather was mostly overcast with an occasional patch of blue and burst of sunshine.  Unfortunately, we would bid a sad goodbye and wishes of improved health to one member of our trekking group. She had developed a respiratory problem and was coughing fitfully.  The doctor at the Laya health clinic had recommended a descent down to Punakha, some two days to the south where more extensive tests and help could be given. 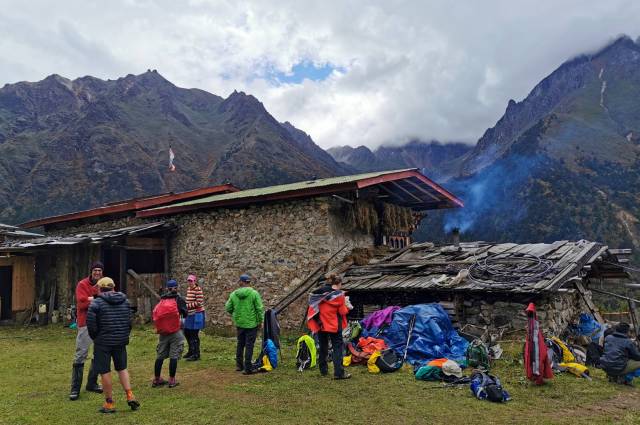 Day 12 – getting ready to leave Laya

As we left the village,  we walked through the Laya school grounds where the staff and students were waiting for the arrival of some dignitaries.  Flags festooned the perimeter and chairs were arranged in a U-shape in the open space.

Set up in the yard were also the yak fiber tents traditionally used by the Layaps when taking their yaks to distant pastures.  The Canadian equivalent situation would be southern politicians flying into an Indian reserve (in Canada we refer to it as a First Nation) and finding teepees or wigwams set up and elders walking around with feather headdresses. I wondered if the Layaps were expected to put up these tents and wear those comical hats whenever politicians from other ethnic groups are helicoptered in from Thimphu?  It would appear so. 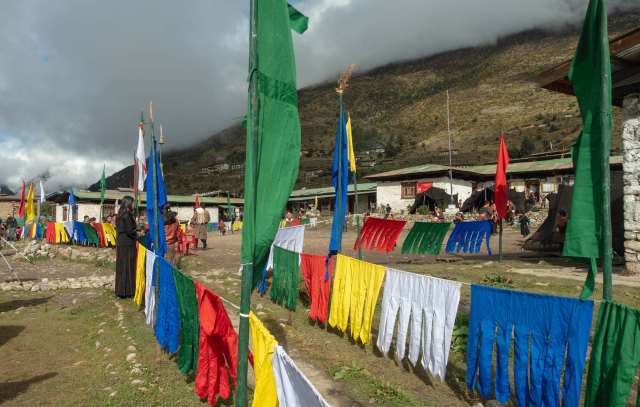 Laya school staff waiting for visiting dignitaries in the schoolyard 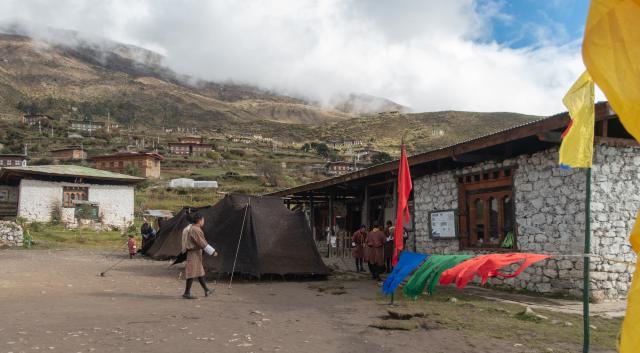 teachers at laya school waiting for dignitaries to arrive

To stress the traditional Layap culture, the girls were dressed up in a yak fibre one-piece black woollen jacket/shirt decorated with vertical stripes on the bottom half. Completing the look is hair worn long and covered with the bamboo hat with a long spike on top. If the men in the image above are Layap, then their basic garment is a long-sleeved linen gown coloured red and saffron. [Given their garments, the males might be Ngalop teachers or administrators from the south.] 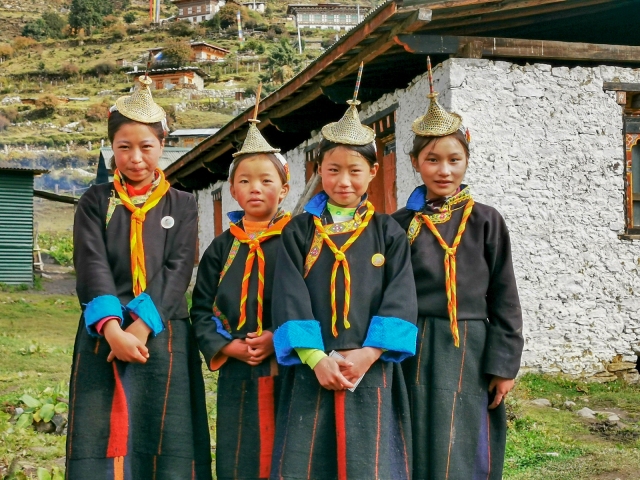 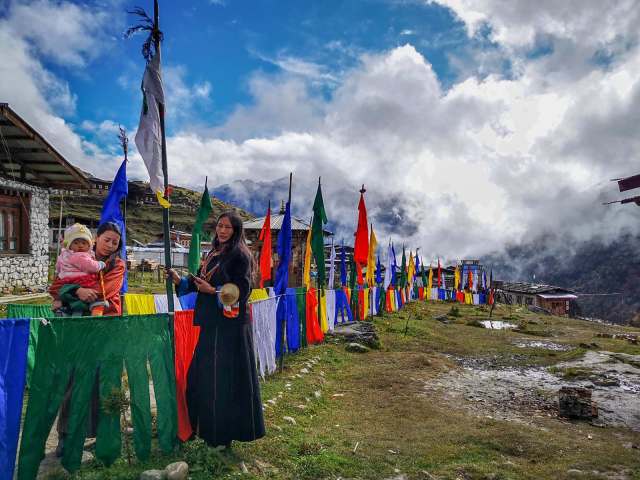 locals waiting for the arrival of dignitaries at Laya

The photos above and below contrast the traditional Layap look with a modern one! 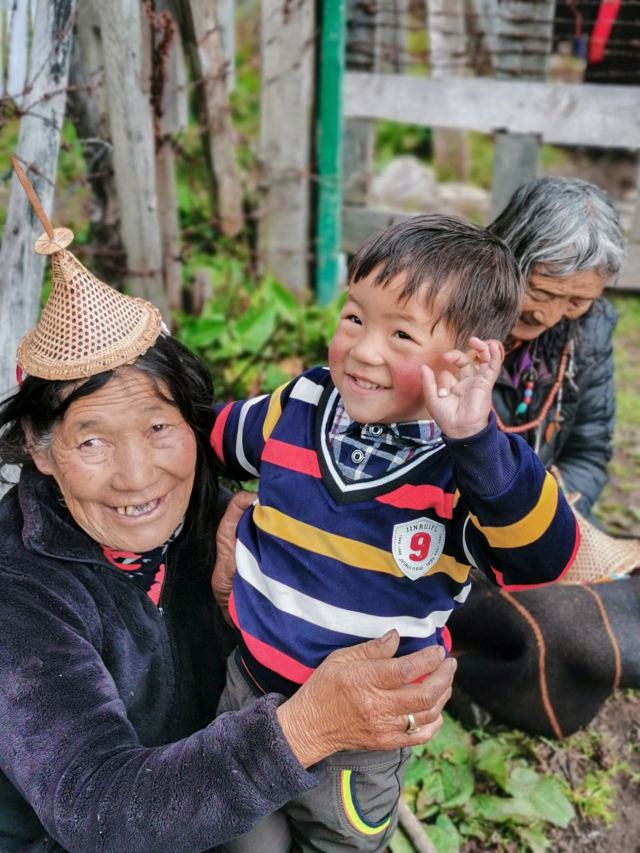 the last goodbye as we leave Laya for Rodophu

As you leave Laya there is a stone archway and a few strings of prayer flags that highlight the way out. 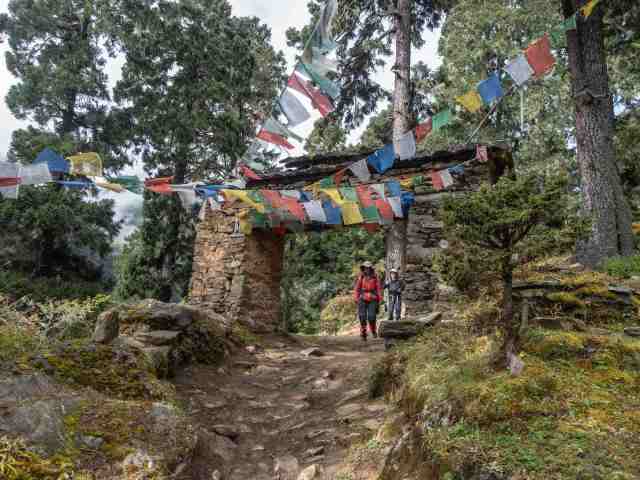 fellow trekkers passing through the main gate to Laya

Not too long afterward, I heard the sound of a helicopter and I assume it was bringing in for the morning or the day those dignitaries – probably politicians – from down south. Not for them a two-day journey up from Punakha that involves a final four-hour uphill walk from the end of the road!

And then I saw this guy in the image below. He was carrying a refrigerator up to Laya!  Wow! He probably got it in Thimphu and then was able to use vehicle transport until the end of the road at Koina.  I thought –  Why couldn’t that fridge have been on that helicopter with those politicians!  Laya has had electricity since 2017 so the fridge would be plugged in somewhere in Laya by the end of the day! 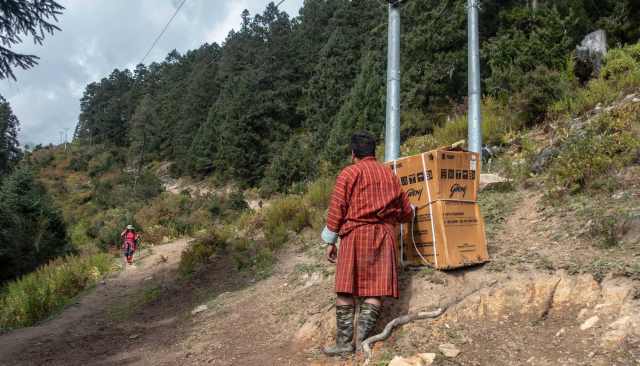 It is an easy walk downhill, especially if you use trekking poles. It took us 1 1/2 hours to get to the army camp on the east side of the Mo Chhu where permits are checked.    While our guide took care of the legalities, everyone enjoyed the sunny break from the usual clouds. 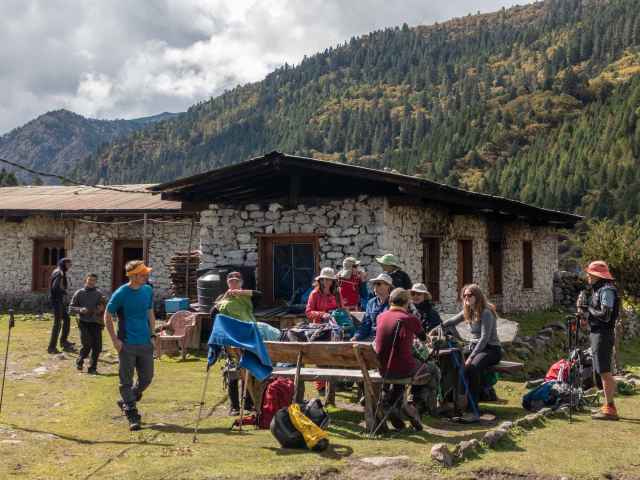 And then it was through the gate on the south side of the complex and on to the descending trail, occasionally somewhat muddy thanks to the rain and the volume of pack animals using the trail. 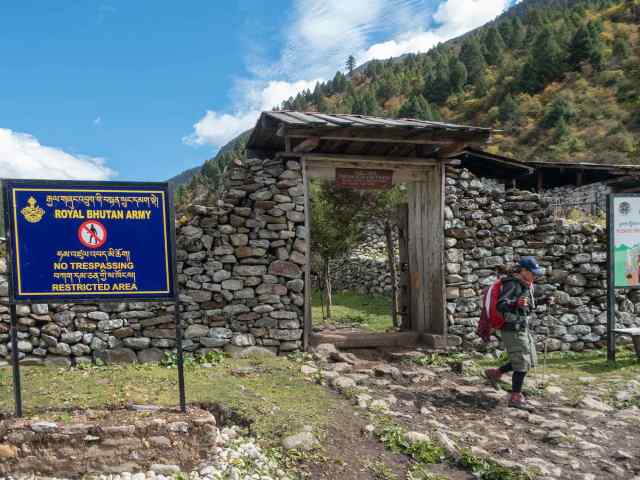 the south gate of the army checkpoint to Laya 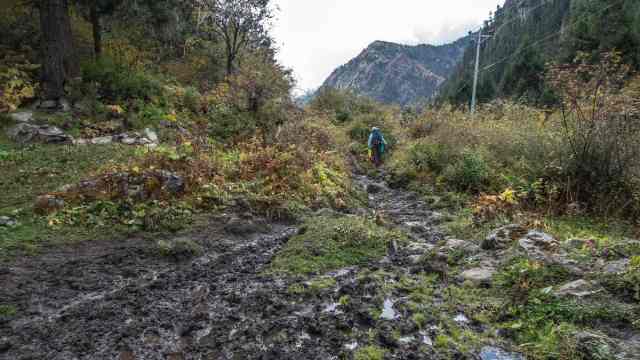 About 2 1/2 hours from our Laya departure we came to the junction of the Snowman Trail with the trial from Gasa.  If we continued straight we would be heading south to Koina; we turned left (i.e.east) and began an initially steep upward curl towards the side valley – that of the Rodo Chhu – where our camp was located. 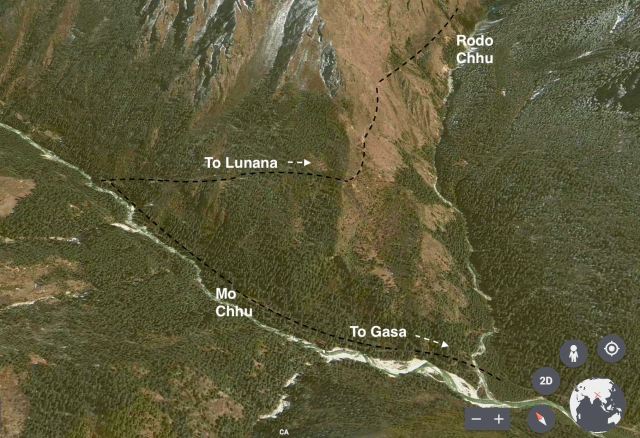 the trail for Lunana from Laya – the Snowman Trek

Sections of the trail to Lunana were packed dirt and easy to walk; other sections, the ones through forested areas, were often muddy and meant we were back to stepping from stone to stone to avoid the mess below.  A couple of times we stepped to the upper side of the trail while yak caravans on the way to Laya or Gasa came at us from the east. One 200-meter stretch was wiped out thanks to a landslide.  See below for pix … 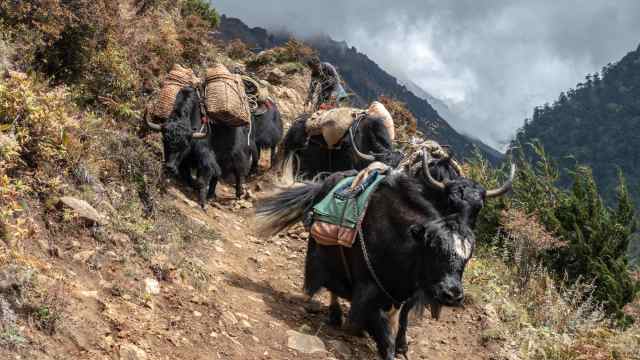 Yaks approaching from Lunana district as we head east 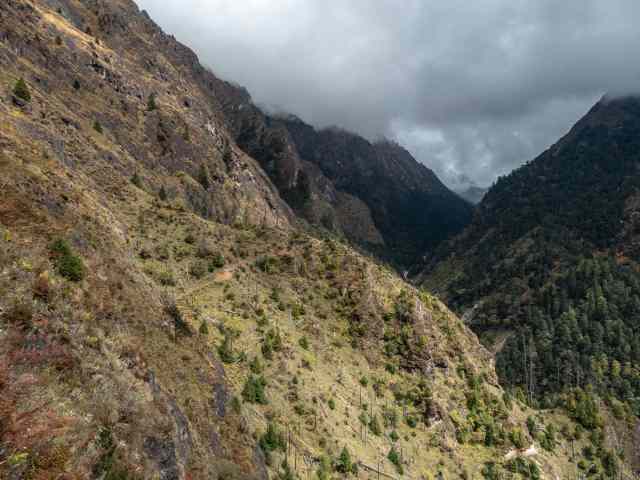 a section of trail above the Rodo Chhu on the way to Rodophu – the slash in the middle of the image! 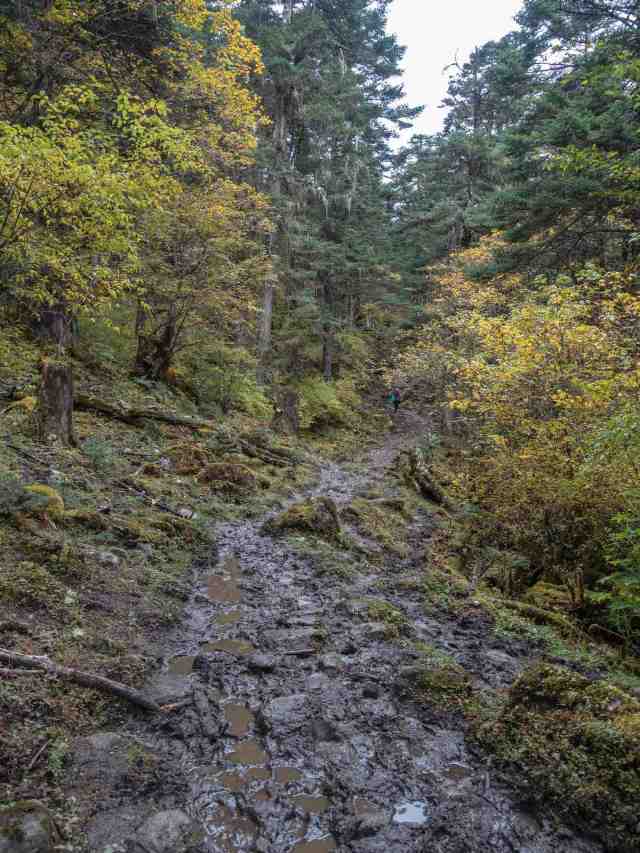 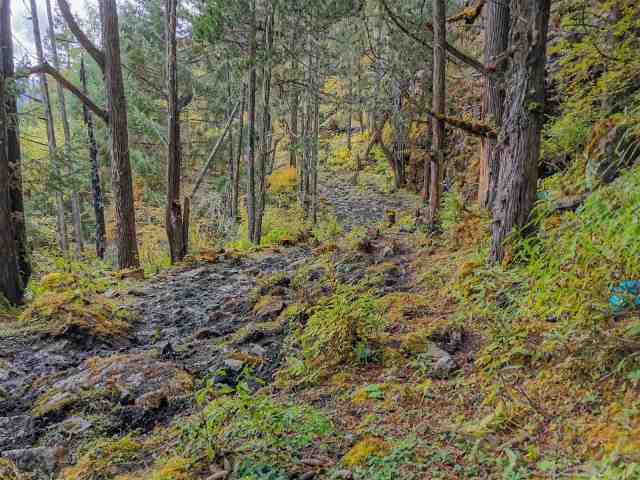 It started to rain in mid-afternoon after our lunch break. This time I would not assume that it was just a short shower so I slipped on the rain pants as well as the rain jacket. Good call – it rained for the final hour into camp! 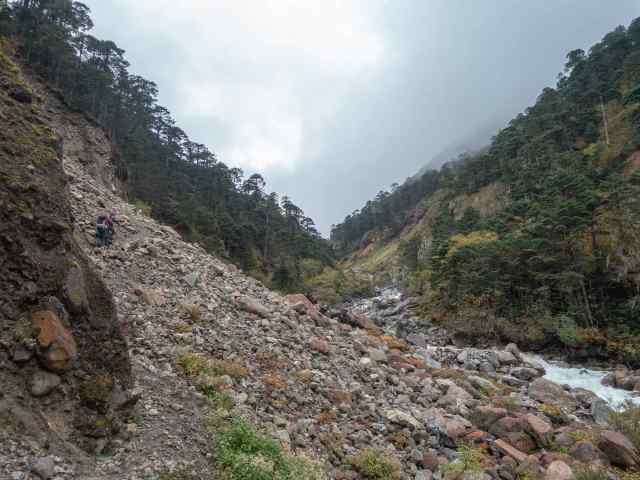 Every once in a while,  we came down closer to the river – the Rodo Chhu, a very impressive glacial river coming down from the glacier on the west flank of Tsenda Kang. It reminded me of some glacial streams I have walked up in the Canadian Rockies, that same energy and off-the-beaten-track feel. 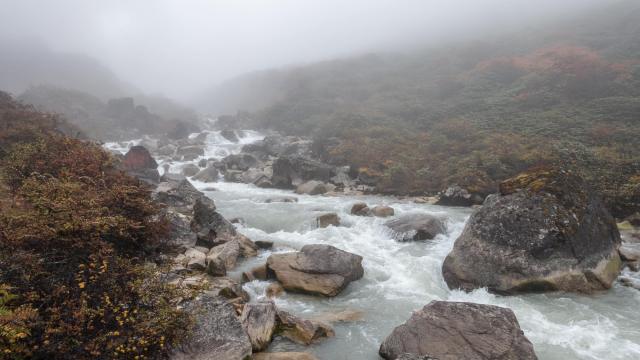 the Rodo Chhu on a rainy afternoon in October

About a kilometer before the campsite, we crossed a substantial wooden bridge to river left of the Rodo Chhu (i.e. the south side).   It had taken us about 3.5 hours to walk up the river valley after turning off from the main trail to Gasa. 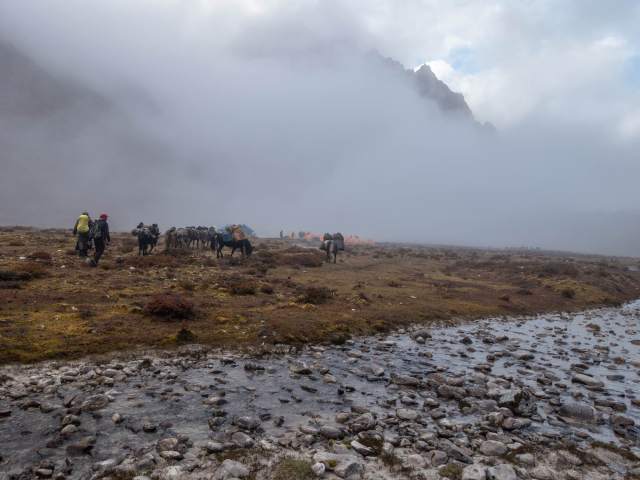 Not soon enough the campsite appeared in the mist ahead.  I had struggled to keep up with the others after lunch and was happy to see the end of what turned out to be my single most tiring day of the trek.  I didn’t even get a shot of the campsite that afternoon. That would have to wait until the next morning!

As the satellite image below makes clear, the Rodophu campsite is about half-way up the length of the Rodo Chhu.  An interesting day trip for a group with days to burn would be a hike up to the foot of the glacier below Tsenda Kang.  We were on a tighter schedule.  The next day we would head up to Tsemo La SE of our camp and then remain at 4900 meters for the rest of the day all the way to our next camp.  See the next post for the views! 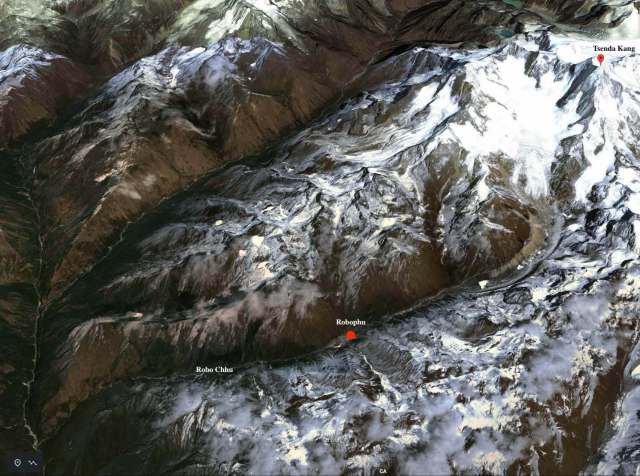 Next Post: Day 13 – Rodophu To Narethang Via Tsemo La