The Morning “On Trek” Routine:

This is how things unfolded each morning:

On the first morning,  7 a.m. was the official wake-up time. I unzipped my sleeping bag around 6:45 and started by stuffing the agency-provided bag back into its sack. (We were also each given a 1 m x 1.5 m wool carpet, a large size Thermarest Base Camp pad, as well as a pillow!  All of the contents of the tent would go into its own canvas bag and then delivered to the tent at the end of the day after the tent was back up.)  At 7:00 I exchanged good-mornings with the kitchen guys who were on their tea/coffee round and requested a black tea.

At 6:55 I declined the bowl of hot water and continued packing the duffel and also making sure I had what I needed in my day pack. Once the duffel is gone you do not get access to it until you arrive in camp in the afternoon.

Breakfast in the dining tent was an hour after wake-up, ample time to get organized.   I was out of the tent early and brought my packsack and trekking poles to the dining tent and then went for a walk around the site with my camera.

While we had breakfast the tent crew was busy taking down the tents and putting all the contents of each tent inside its own bag.  The total weight of each trekker’s bag would be between 20 and 25 kilograms; those horses carrying the trekkers’ stuff would be loaded with two of them.  Yet other horses carried the various tents themselves as well as the food and other gear. In all, some 43 horses made up our train as we moved from campsite to campsite!  It was a small village on the move! 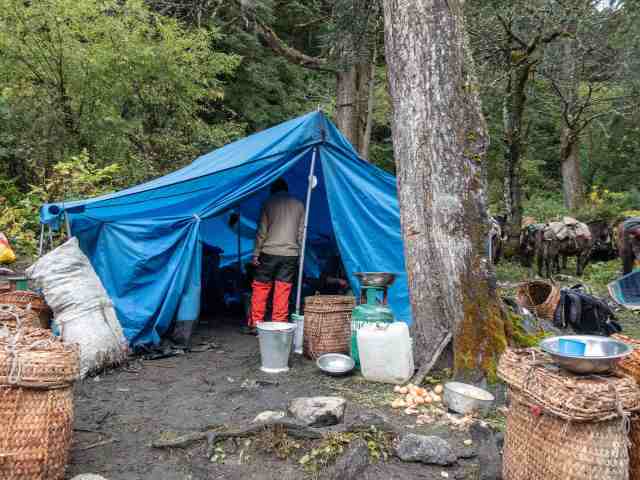 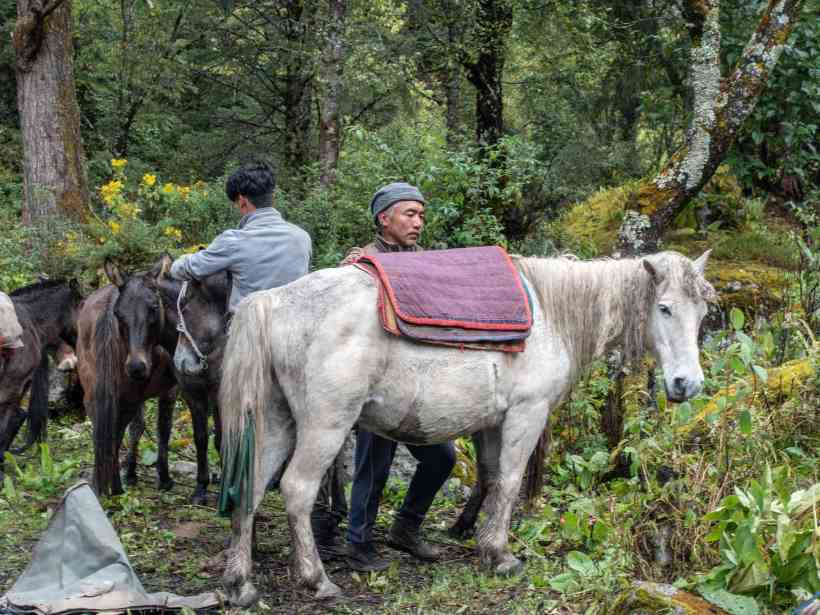 Breakfast done, we hit the trail north at about 9:00.  We spent most of the day walking on the east side of the Paro Chhu. Never too far away were those hydro wires you see in a few of the following images.

the trail to Thangthangka – letting a local horse train pass by

Lunch On The Trail:

Somewhere along the way, we stopped for lunch. Since this was our first lunch on the trail we were amazed to see the lengths to which the crew went to make us comfortable. Three horses carried all the stuff needed to set up what you see below – 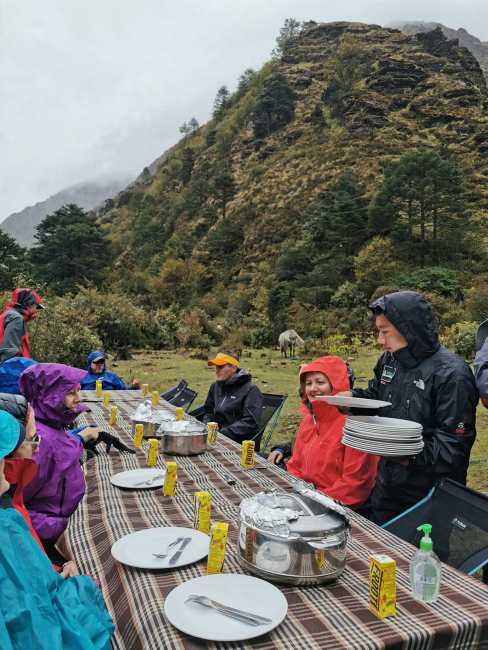 No matter where we were, this lunch setup is the one we used throughout the trek. [The more common format used elsewhere is a packed lunch for each trekker.] On one occasion when it was snowing we even erected a tent over the tables to keep us and everything else dry!

Lunch over, we had a short afternoon walk before arriving at the Thangthangkha campground around 3.  We approached on a clear trail running on the west side of the Paro Chhu. Most of the tents were already up; the crew had managed to find a grassy area free from mud.  Behind the tents were three buildings. We would later make use of a room in the one nearest to our tents; it would serve as our dining room. 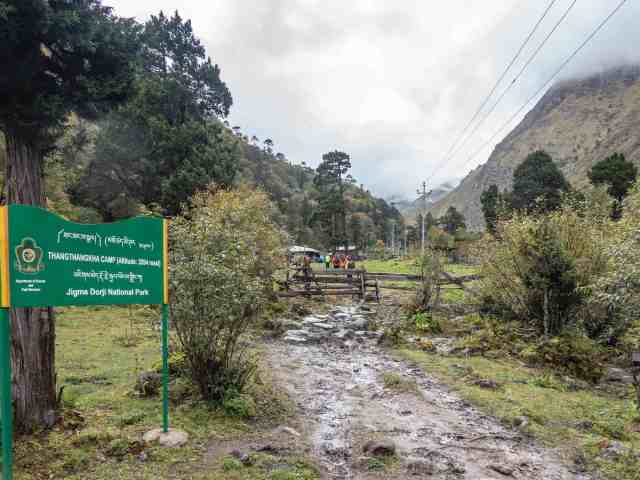 Four dogs were curled up on the grass as we hopped over the fence enclosing the area; a couple of barks and they stopped and laid back down. 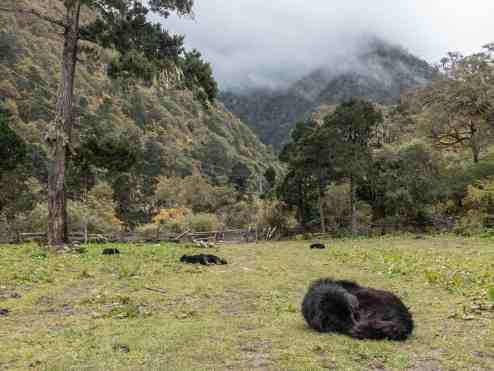 Thangthangkha dogs curled up in the tenting campground

Thangthangkha campground – the end of Day 2 on the Snowman trek 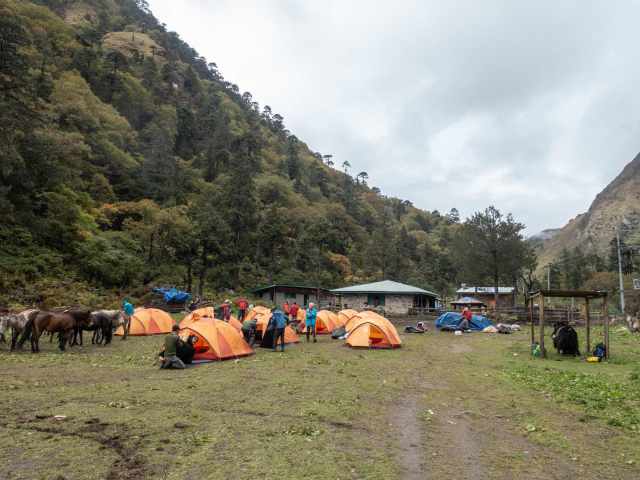 Thangthangkha on the way to Jomolhari – fenced-in campground

A few times during the trek, when there was a building available, we would make use of the interior space as a dining room.  Day 2 Supper/Day 3 breakfast was one of those occasions. Here is what it looked like for Supper on Day 2 –

photo taken by a fellow trekker

Food On The Trek:  Plant-based only, please!

What follows is a bit of a rant about the food served on the trek. Feel free to ignore it!

On signing up for the trip four months before departure I had made it clear that I wanted to keep to a plant-based only (i.e. vegan) diet. I was assured that the local company doing the trek (Yangphel) would know about my food requirements and would be able to meet them. A month before departure I checked again to make sure that my requirements had been relayed.  My World Expeditions Ottawa contact assured me everything would be fine.  The WE  “Essential Information” brochure included the following –

Provided we are advised in advance of your departure we are able to cater for vegetarian diets and can assist with medically recommended diets (allergies and intolerances). Please ensure you discuss your requirements with us well in advance (at least 1 month prior to your trip) to determine whether we can cater to such dietary requirements on your chosen adventure. Please note that options are likely to be limited in very remote locations or alternatives may be more expensive or unavailable. There may be times when those with special requirements may need to provide their own food.

It turned out that the local company had no idea that there were two vegans on the trek!  I was told that this is only the second year that World Expeditions has worked with Yangphel. If this is the case, they need to do more work on the menu.

Given the $300. US a day I paid to be in Bhutan, I expected more.  The poor cook in the field did not have the resources to deal with the reality of vegans who require the same caloric intake as the other trekkers.  A few days later I was actually worried that I would not be able to finish the trek because of a massive food/calorie deficit.

For Day 1 supper the night before I had the plain rice and some chewy mushroom (perhaps not completely rehydrated?) and 100 grams of cashews I had brought from home. That was it.

Day 2 breakfast involved a muesli cereal supplemented with some of my dried fruit over which I poured some apple juice. I also had a couple of slices of toasted white bread with peanut butter.  On the table was some jam which I would also end up using.

Lunch involved more plain rice, boiled veggies – probably mushrooms, cabbage, or broccoli. Since the food was prepared in the morning, it was usually cold by the time the containers were opened four hours later.

Of all the food I have been served on treks around the world, the bland and predictable fare in Bhutan ranks at the bottom for tastiness and variety. I remember our local guide telling us at our final supper at the hotel before departure that on trek we could expect a five-star chef’s cooking.  This was definitely hype and hyperbole!  I would rate it at ** at the most. World Expeditions needs to sit down and do some work on the menu for the trek with the local agency it is currently using. Maybe WE or the local agency need to draw on the expertise of Nepalese trekking cooks, who have forty years of experience to draw from.

A positive note – On the three or four times that we were served aloo gobi (a curried potatoes and cauliflower dish),  I complimented the cook team for a delicious supper.  I will admit, however, I had never before been presented with a version that included eggs!  They were good enough to make a separate version for me without the eggs. Another winning dish was the dal, a soupy lentil stew/soup.  Poured over the plain rice, it made it so much more interesting. One supper included a Bengali-style brown lentil dish that was appreciated.  It should have appeared more often!