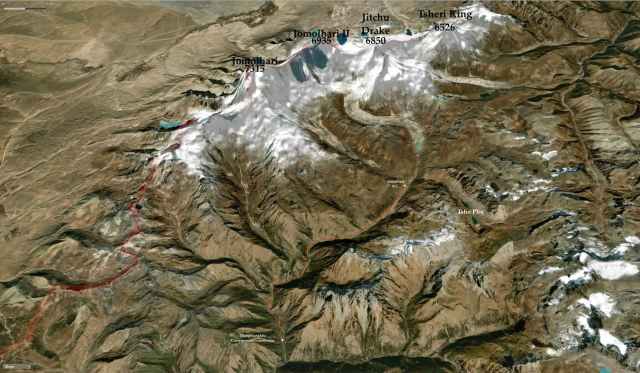 After breakfast in the same room in the guesthouse that we had used the night before, we left a muddy Thangthangka campground around 8:30.  The day’s weather would feature more low-hanging clouds and mist. As for the mostly muddy trail of the two first days, after the first two or three hours the forest canopy was gradually replaced by a more open vista and the trail also improved in walkability. 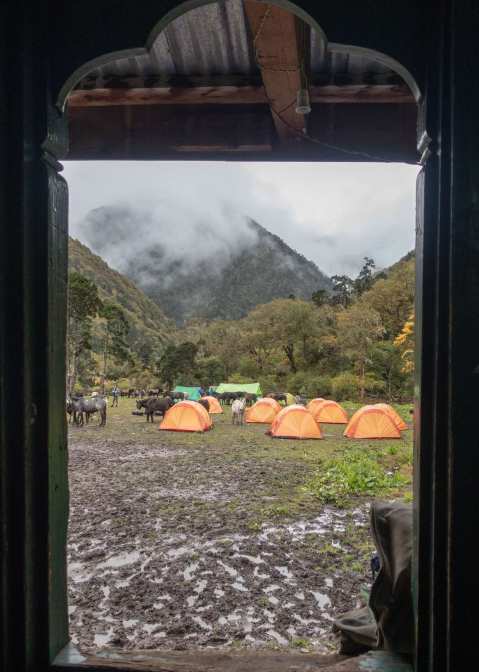 The guidebooks talk about the stupendous views of Jomolhari – not only from Drugyel Dzong but also from the Thangthangka campground – but three days in and we still had nothing but cloud when we looked in the direction of that high peak.  The hydroelectric poles and wires, however, were never far away and often visible! 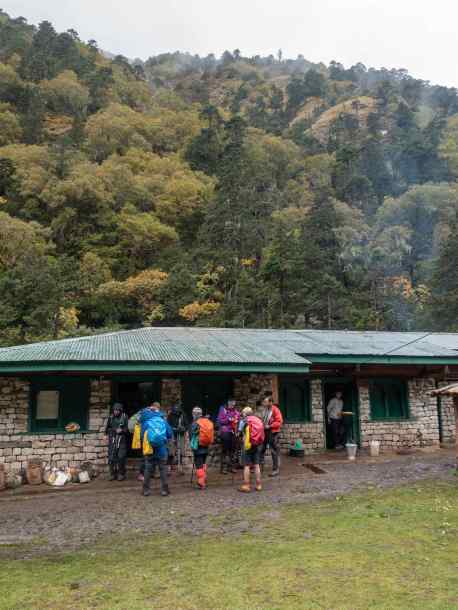 Day 3 – getting ready to leave from Thangthangkha’s guesthouse

There were a few dogs at the Thangthangka guesthouse.   The  Tibetan mastiff below seemed to have a job as a guard dog; here he is tête à tête with one of our guides as we were ready to set off on the day’s 17-km. walk up to our next campground called Jomolhari Base Camp. (There must be a dozen different ways of spelling the mountain’s name; I chose the simplest version. See also Jhomolhari, Chomolhari, etc.!) 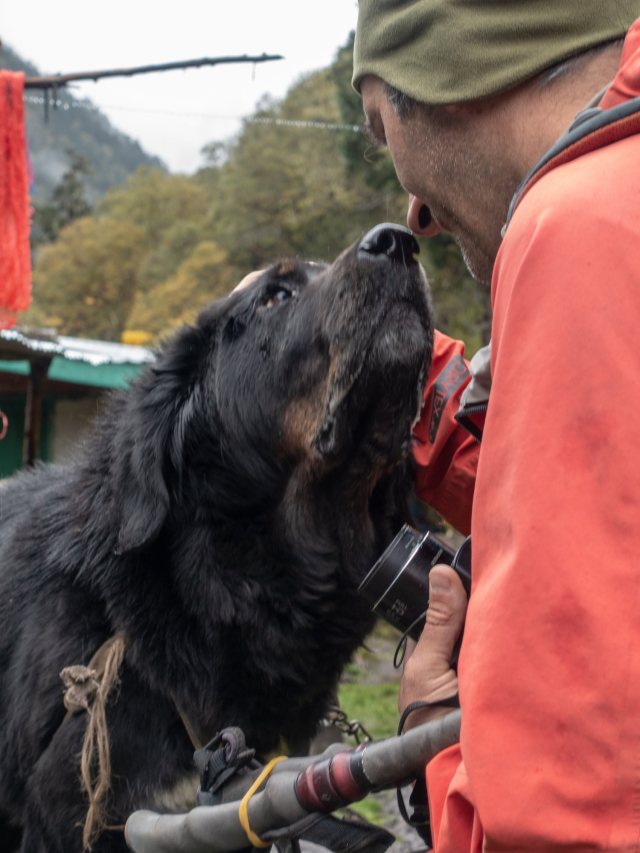 The trail follows the west side of Paro Chhu all the way to Jomolhari B.C.  Every once in a while we would stop and take in a view of the river to our right as its glacial water tumbled down on its way to Paro and points beyond.

the Paro Chhu on Day 3 to Jomolhari B.C. – always on our right

In the morning we also walked past a rather ramshackle collection of buildings that served as a Bhutanese and Indian Army trekkers’ permit checkpoint.  While trekkers may be one concern, another is the easy accessibility of the Tibetan side thanks to nearby passes and Phari, a town of some 2000 inhabitants 11 km. away on the Tibetan side.  Smugglers bringing Chinese goods into Bhutan often use one of them to conduct their illegal business. [Clcick here for a map showing Phari in relation to the trekkers’ trail to Jomolhari.] 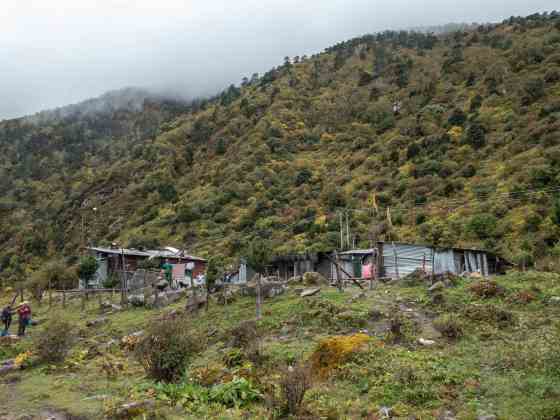 an Indian army checkpoint on the trail to Jomolhari from Thangthangkha

Along with the Para Chhu,  there are also a number of side streams coming down from those hills on the border side; every once in a while we’d cross one and I would think – “Should I get a shot of this one? – knowing that, as awesome as it is to stand there and take in the energy of the water rushing by,  it would look pretty much the same as all the previous seventeen to my wife when I showed her the pix! 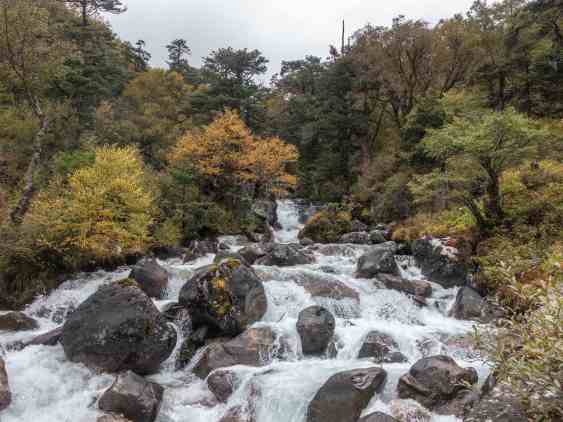 Given the fairly low population in the region, there were few reminders of their Tibetan Buddhism.  We did see some examples of the following:

breaktime in a meadow (thang) on the way to Jomolhari

While we set off before the tent and kitchen crews, they would catch up to us later in the morning and by the time we got to the camp in the afternoon, the tents would often be up and ready to take our duffel bags. An hour or so later, so too would the dining tent and the two toilet tents (erected over a 30 cm-deep hole dug by the crew and complete with sit-down seats!)

The pix below capture a few of our 43 horses as they lug all of the stuff mentioned above – the various tents, the trekkers’ duffels, the food, etc.). Each horse carried between fifty and sixty kilograms. In the first two images, they cross a side stream on a rough wooden bridge.  Then the trail was back to the Paro Chhu.

our Snowman Trek village on the move! walking up the right side of the Paro Chhu

Lunch Day 3 and the same set-up that had amazed us the day before!  The three horses carrying the food and gear got to graze while we had our sit-down meal.

I was impressed with Yangphel’s (the local trekking agency in charge of the trip) choice of a camp chair! It invested in the pricy  Helinox Chair One XL  (U.S. $150. each!)  On the plus side, they only weigh 1.5 kg. each and are fairly compact and take some abuse. One horse could carry all the chairs and the three equally compact tables!

We didn’t know it but our lunch spot was only a 4-km. walk away from the Jomolhari campsite, which we reached shortly after 2 p.m. 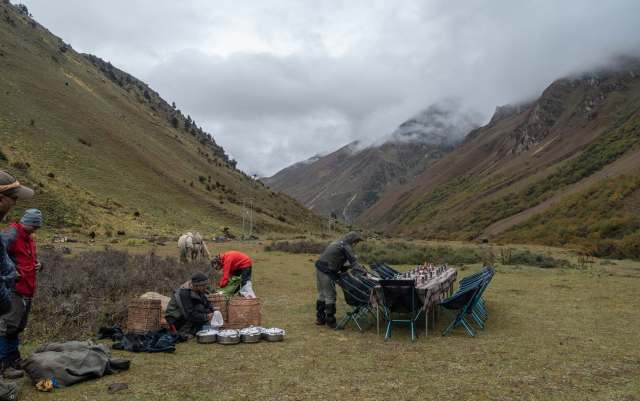 our Day 3 lunch set-up on the way to Jomolhari B.C. 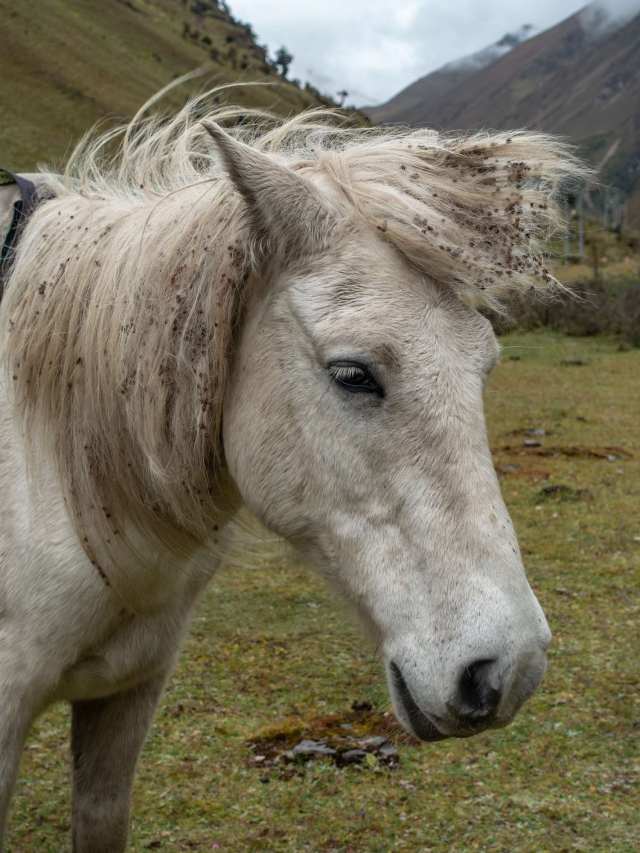 a serious case of burrs on this poor horse’s head

Day 3  – the Paro Chhu a few km. south of Jomolhari Base Camp

By the time we approached our campsite the forested slopes had been replaced by a mud-free trail through scrub and low-level bush, as the remaining pix will show.

There are a few scattered settlements (collections of a half-dozen houses) that the trail passes through or under.  We really did not see many signs of life until we came to the very last one, Dangojang (not to be mistaken for Jangothang just north of Jomolhari B.C.!) 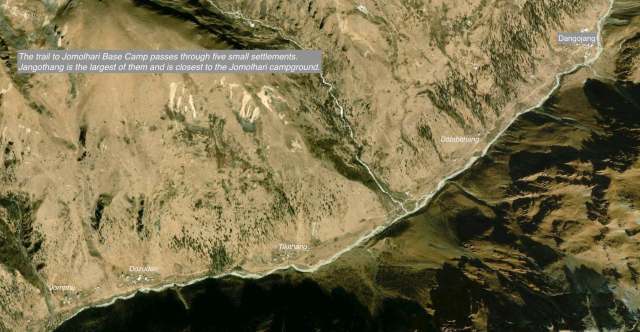 the trail to Jomolhari-base-camp passes through a few settlements

It is the one closest to Jomolhari B.C.;  in the satellite image below it is located on the top right.  As we entered the south end of the village we passed by a dilapidated chorten and a square open platform covered with a roof to the side. Prayer flags long past their best-before dates draped each of them. It made me wonder how important they really were to the villagers.

a dilapidated chorten at the south end of Dangojang

On returning home I took a look at some satellite images of the village and was able to locate the chorten and covered platform that we had passed as we walked through Dangojang.  See below for the view. 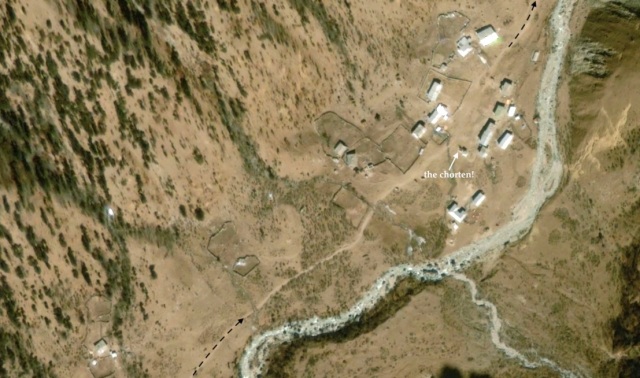 Visible in the image below are the hydro poles leading us to Jomolhari; on the right-hand side is a chunk of rock that was turned into a natural chorten!  Draped around the top was a string of prayer flags. 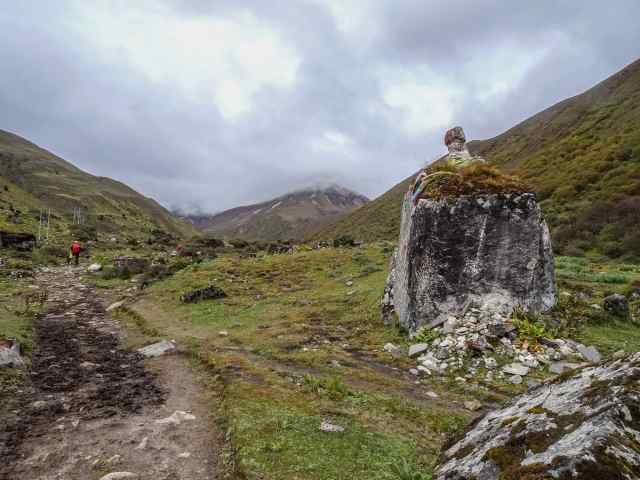 As we came to Jomolhari Base Camp we saw four chortens on a platform to our right and in the distance a couple of buildings and some of our tents. We were now at 4044 meters, having gained almost 500 in the course of the day’s walk.  Given that it was only Day 3 of our trek and we had started at 2200 meters in Paro, the 1800 meters gained is about twice that recommended.  To give our bodies a chance to adapt to the thinning air, we would sleep at Jomolhari B.C. for two nights.  [Three of the 16 trekkers were also making use of Diamox as prophylaxis to aid with the process; I was one of them.] 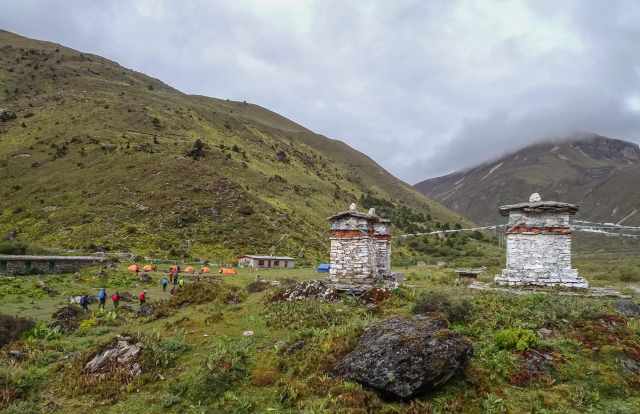 our trekking group arriving at Jomolhari Base Camp

Hearing “Jomolhari Base Camp” immediately conjures up Everest Base Camp and you picture mountaineers starting off from the flat area at the base of the mountain for a summit of Jhomolhari. However, there is no record of the camping space ever having been used for such a purpose.  It does have a nice ring to it!

Since 2013 it has also been given another purpose when the Tourist Council of Bhutan made it the location of the Jomolhari Mountain Festival,  highlighting various aspects of local culture and an opportunity for enterprising locals to set up vendors’ tables for the trekkers who happen to be in camp.  This year (2019) it took place on the 14th and 15th of October, two weeks after our stay there.  Recent trekking brochures mention it as yet another highlight of the Jomolhari/Snowman Trek. One thing the organizers play up is a possible encounter with the snow leopard! There are supposedly some 30 in all of Jigme Dorje Park.  The “festival” does all seem somewhat contrived but, given the mandate of the TCB,  it also makes perfect sense. The locals get to act as props as the tourists take in the scene with their cameras.

Jomolhari Base Camp view from the south

And that view of the mightly Jomolhari peak, the highest of those on the western border which Bhutan shares with Tibet.  Well, that would have to wait until the next day!  The two shots below capture the little that the mountain revealed that afternoon. 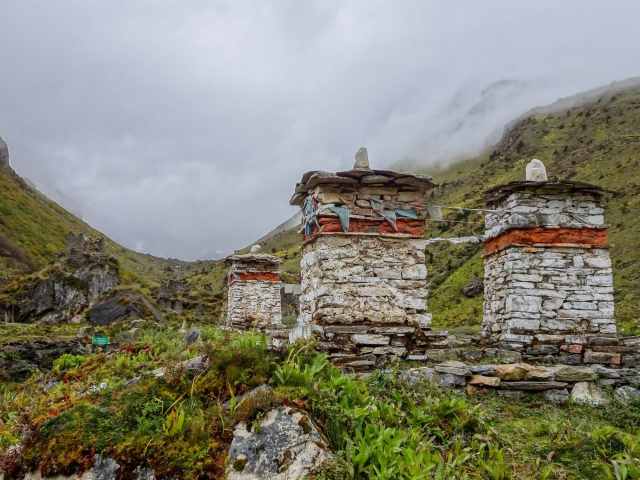 chortens at Jomolhari with Jomolhari hidden in the clouds

As you look up to Jomolhari, you see the remains of a dzong on a hilltop, as well as crumbled bits of what was once a wall. 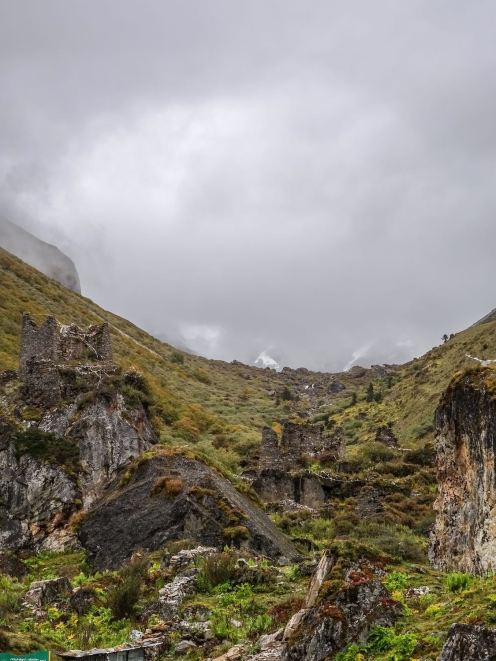 our Day 3- afternoon view of Jomolhari!

At Jomolhari B.C. there is a guesthouse for use by trekking groups. During our stay, we had use of the building as our dining area. The cook team was also about to set up their kitchen inside the building, a nice upgrade from their blue cook tent.

We shared the Jomolhari B.C. camping area with one other trekking party – a group of Bhutanese students whose blue and green tents are visible in the image below.  The orange tents were ours – they were Marmot Thor 3P tents and they mostly held one person each! Not only did the amount of space we each have make it quite decadent, but add to that the Thermarest Basecamp sleeping pads, the 2m x 1-meter wool carpet,  the pillow, and the also-provided Marmot sleeping bag and you have deluxe accommodation. 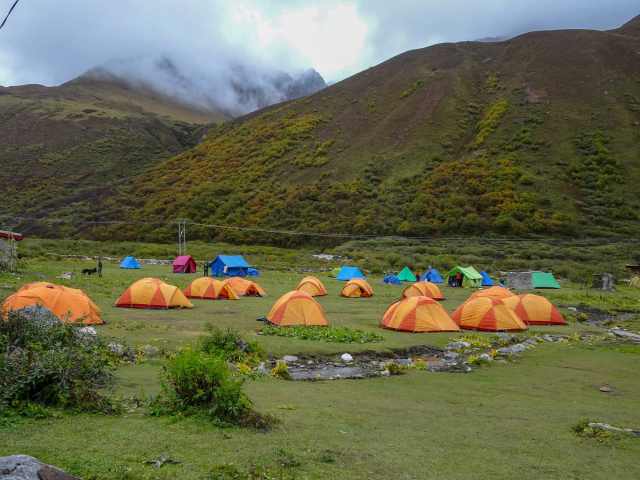 a view of the Jomolhari campsite from the west

The next day, as an acclimatization exercise (“Walk high, sleep low!”) we would walk up the hillside behind the tents in the above image and into a hidden valley. The next post has the pix! Included are our first views of Jomolhari!

Next Post: Day 4 – Acclimatization Day At Jomolhari Base Camp