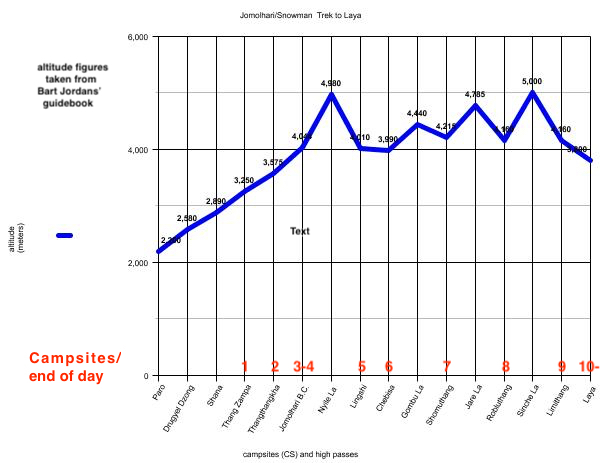 The ascent up to Jomolhari Base Camp from Paro over three days is almost 2000 meters.  Those starting the Snowman Trek will hopefully spend a day before the trek acclimatizing with a walk up to the Taktsang Gompa. Still, an 1100 meter gain from Shana to Jomolhari in three days is pushing the recommended limit of 300  maximum per day.    If trekkers are going to experience altitude sickness it will probably be in the first few days.  All trekking itineraries include a rest/acclimatization day at the Jomolhari campground to provide some extra time for bodies to adapt to the thinning air.

As the above chart suggests, if you are okay at Jomolhari then you should be okay until Laya since the altitude of each successive night’s camp spot remains the same at about 4000 meters.  The four high passes of the trek after Jomolhari provide excellent additional acclimatization and illustrate the mountaineer’s motto – “Walk high, sleep low”.

There were sixteen trekkers on this trip. No one seemed to suffer from even moderate altitude sickness.  Only three of us – I was one – made use of Diamox, a drug that helps the body in the adaptation process. I had been encouraged by the guide to forget about the Diamox and he may have been right, given that the 13 who did not use it seemed to do fine.  I ended up using it anyway since I had done so on a half-dozen previous high-altitude treks and had no issues at all – not even a headache.  I figured – why mess with something that seems to work for me.  If I do another such trek, I’ll use the Diamox again!

An early morning (5:45!) call by the guys in the kitchen and those who got up were rewarded with a  clear view of a mountain peak in Bhutan – our first since our arrival four days before!  In front of us was Jomolhari, at  7315m the highest peak on Bhutan’s western border with Tibet.  In the image below it is the peak on the left; the one in the middle is Jomolhari II at 6935;  the sharp peak on the right is the 6850m Jitchu Drake.

I took a couple of shots and crawled back into the tent for another hour of rest.  Given that it was a rest/acclimatization day, we would be starting a bit later. 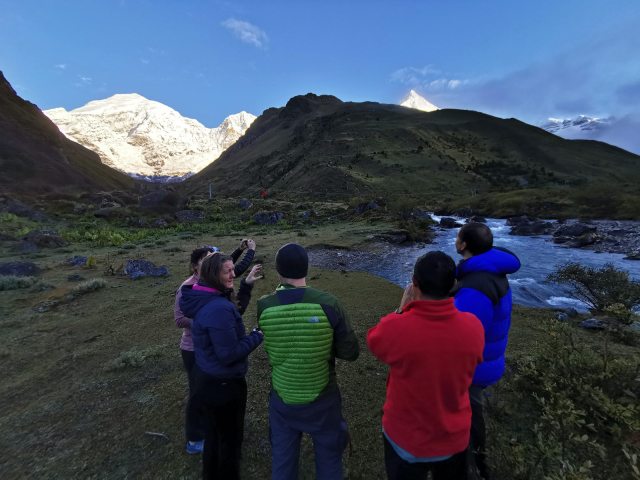 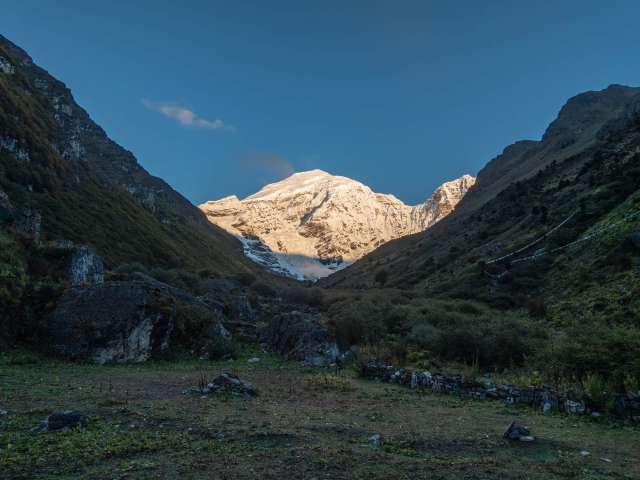 The day’s major planned activity was an acclimatization hike with 310 meters of elevation gain, most of which happens in the first hour.  We were going to hike up to the Tsho Phu lakes on the other side of the river.  A clear day and the extra elevation would mean we would get to look back at some nice views of what you see in the satellite image below. 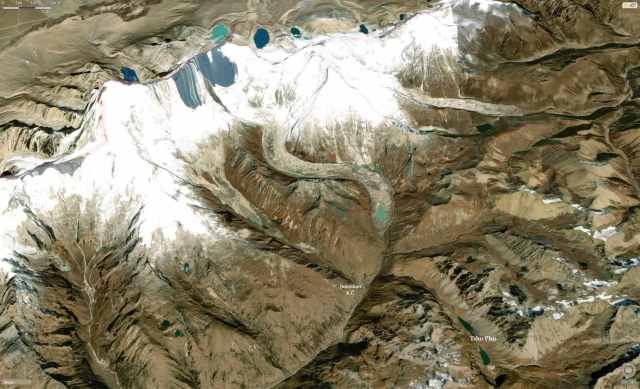 Jomolhari and the Tsho Phu lakes on Day 4 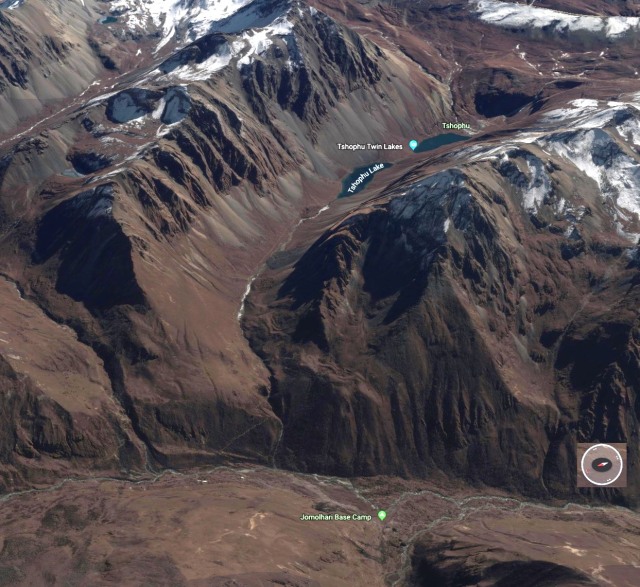 However, it was not meant to be!  By the time we left at 9:00 a.m., the clouds had rolled in and that blue sky that we had seen at 5:45 was pretty much gone for most of the day. The shot below shows the view from the other side of the river half-way up our climb to the plateau and the lakes.

As we walked up the hidden valley, we did see some Himalayan blue sheep on the slopes. They were far enough away that even with the 720mm reach of my Sony HX80, they were barely discernible!

The shallow lakes we were walking to are said to be full of brown trout but as you approach a sign informs you that no fishing is allowed.  Also discouraged are bathing in the lake and spitting into it!

We did pass by a yak herder’s temporary tarp shelter just before the first lake and heard the barking of a Tibetan mastiff guard dog. Luckily he was chained to a post since the guidebooks caution trekkers about the unfriendly nature of the dogs if they happen to be off-leash!

Shortly after we came to the area between the two lakes, it started to rain lightly. 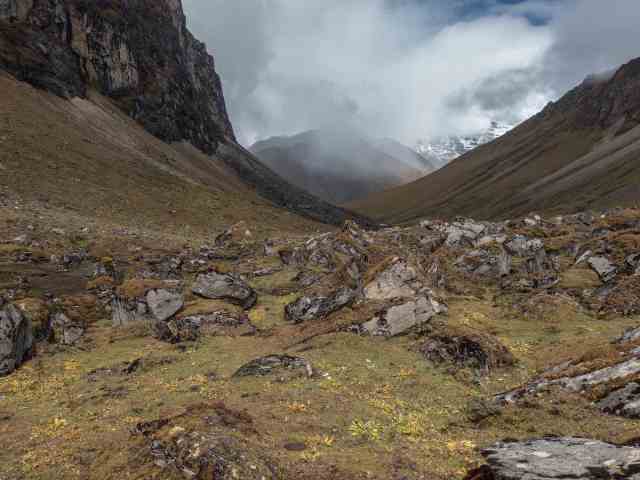 We did see a few yaks grazing on the hillside above the Tsho Phu but the guides noted that there would have been more up here for springtime.  We had an unexpected cup of tea courtesy of Karma and Kinley, the guys who took care of lunch service during the trek.

While we stood there and sipped on our tea, our guide Tendin described another popular trekking route – the Jomolhari Loop Trek –  that comes up to the Tsho Phu lakes before heading back in the direction of Shana. See below for a description of this shorter trekking route! 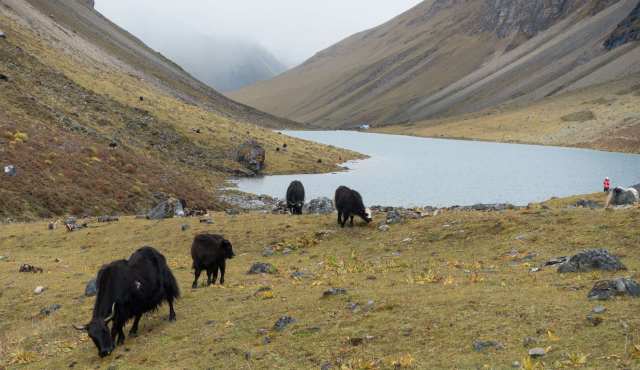 Not everyone has the desire (or the time or money) to sign up for the 23-day + Snowman trek.  The trail from Shana to Jomolhari is undoubtedly the one most walked by trekkers visiting Bhutan.  This probably explains why it certainly had the most litter of any section of the Snowman Trek trail.

The most common one-to-two-week Jomolhari options include the following:

The sketch map below illustrates #2 (The Jomolhari Loop Trek). It is Trek 4 in the Bart Jordans guidebook and has the name  Jomolhari Bonte La Circuit.  It makes use of the trail we had taken up to the Tsho Phu lakes and then continues on to the high pass of the trek at Bonte La (transliterated as Bongetela on the map below) and then returns to Gunitsawa near Shana via the Soi Yaksey valley.

And then it was back down to our campsite. 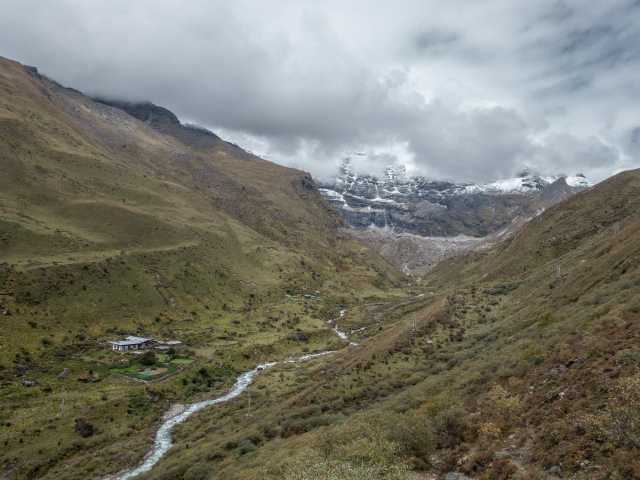 returning to camp – an afternoon view of Jitchu Drake, one of Jomohari’s neighbouring peaks

Back At the Jomolhari Campground:

Waiting at the campsite would be a lunch table set up outdoors.  The weather cooperated long enough for lunch and then – in mid-afternoon – it started to rain. Some retired to their tents; others moved into the guesthouse dining area. For a brief period the clouds cleared and we saw some blue sky as we looked towards Jomolhari.

Jomolhari Campsite – a semi-clear view of the peak

afternoon view of Jomolhari from the campground

I turned to the east and looked back at the eastern slope of the Paro Chhu that we had climbed in the morning on our way to the Tsho Phu lakes. Acclimatization mission accomplished – the next day we would be pushing on to Lingshi, crossing our first high pass of the trek.

a view of Jomolhari Base Camp in the afternoon

Next Post: Day 5 – Jomolhari Campsite to Lingshi Via Nyile La