The Snowman Trek can be divided into main sections:

The last section of our trek – and reputedly the toughest one – was about to begin.  Coming up were the two highest passes of the trek and a couple of nights’ camping at around 5000 meters.  This high altitude trekking would remind me at times of my walk across the high plateau on the north side of Nepal’s Annapurna range in Upper Mustang.  The views over the next five and half days would sometimes rival the ones of that earlier trip, even if there is nothing in Bhutan as dramatic as our crossing of Nepal’s Saribung La (6040m). [See here for pix of the Saribung La area.]

Some trekkers had gotten up early to see off the seven ultra-marathoners on Day 3 of their five-day Snowman Race Calibration Run. [See the previous post for more information.  The first official race will be held in October 2020.]  It was a sunny morning in Chozo and by 7:30 breakfast time, trekkers and staff were milling about in the building below the tents in the image below.  After a day off the trail we were keen to get back to it.

our Chozo campsite in the morning sun

looking up the Pho valley to the top of Lunana

To get to the bridge crossing the Pho Chhu, we had to retrace our steps about a kilometer downriver. As we did, I turned around and got a fairly clear view of Table Mountain, one you don’t get when you’re in the settlement itself.  The view would only improve the further we walked downriver.

walking downriver from Chozo to the bridge crossing

Some Snowman route itineraries take the trekkers through Thanza and turn south from there.  Our route could be called a shortcut since we were accessing a route just across the river from Chozo. As we neared the bridge, a team of ten horses were coming towards us. They were from Toncho or one of the settlements near Thanza and on their way to our campsite as part of the horse team our guide had arranged to take us down to the endpoint at Upper Sephu above the Nikka Chhu.

a local horse team on its way to Chozo

From the other side of the river and from higher elevations as we started our climb to Sintia La,  there were more great views of Table Mountain (aka Gangchen Singye, Tjojokang, and yet other names with variable spellings).  I much prefer this kind of trekking – and the views it offers – to the muddy trails on the heavily forested slopes of the first two and a half days of the Snowman Trek. 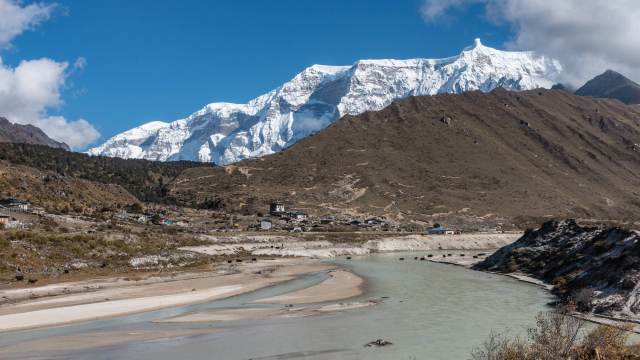 The first couple of hours were steady uphill but the trail was fairly clear and the walking easy. We had as company a Chozo local who was looking for a yak who had gone missing the previous day.  We left him without finding out if he had any luck.  It was the top half of the day’s climb where things got a bit more difficult –  it involved walking through a boulder field on a  steep slope.   The two following pix will give you an idea!

trekkers and horses heading up to Sintia La

a rough trail up to Sintia La from Chozo

Somewhere along the way – making ourselves comfortable in the rock rubble – we had lunch.

We had left around 8:30; by 2:30 we were walking alongside the glacial lake on the Chozo side of the Sintia La (aka Chinchu La).  The most taxing part of the day was over since the pass is just beyond it. 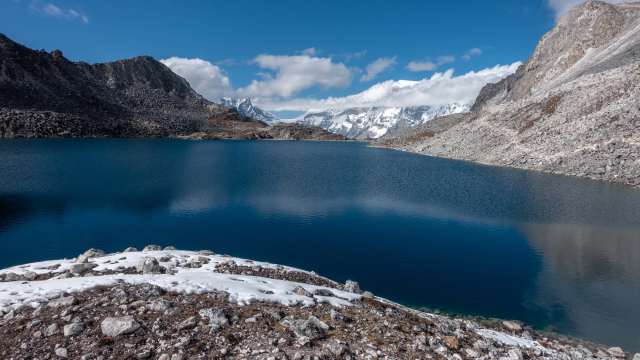 the trail passes by the lake before Sintia La – See here for a similar shot from 2017 with prayer flags!

Sintia La was the least pass-like of the eleven we did.  Once beyond that glacial lake on the Chozo side, you reach a high plateau and it takes a moment to realize that is it. There were no prayer flags or rockpiles to mark the spot. The red pin on each map indicates the location of the “pass”, which we marked  with the customary “Lha gyalo” shout. We were at 5200 meters, the high point of the trail that would take us to our camp.

And here is the Google Earth view;  the shallow lake south of Sintia La is partially visible.

As noted, no prayer flags, no cairns.  The trail marker in the bottom left of the image immediately below is about the only marker I can remember seeing.

A five-centimeter snowfall on the plateau would hide any evidence of the path trodden by previous pack animals, traders, and trekkers and make the walk that much more interesting!

For some reason, I took no photos for the next hour and a half!  We would lose about 250 meters in altitude as we walked across a high plateau to our campsite 2.5  kilometers west of Tsho Chena.

a Google Earth View of the terrain from Sintia La to a Campsite 2.5 km. west of Tsho Chena