As longtime canoe trippers on the rivers and lakes of the Canadian Shield, it has only been in the past six years that the possibilities of paddling the northern and eastern shore of Georgian Bay drew the attention of my brother and me.  It began with a four-day trip around Philip Edward Island at the north end of the bay with the La Cloche Mountain range of Killarney as the backdrop to some stunning coastal scenery, memorable campsites, and day after day with something quite novel – no portages! 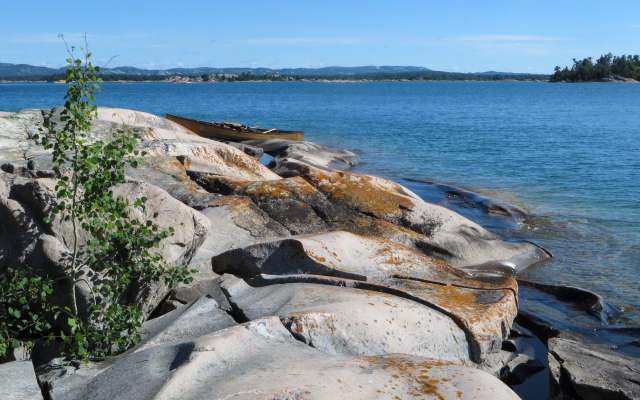 The Essential Book On Paddling and Hiking The G’ Bay Coast: 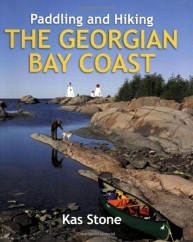 Essential to our preparation for that first trip and often consulted since is Kas Stone’s 2008 guidebook Paddling and Hiking The Georgian Bay Coast.

In it, you’ll find detailed descriptions of over thirty excursions, each complete with maps, info on access points as well as the natural and cultural history of the area, a list of key points to visit for each excursion.  The stunning photographs included in the book will convince any reader to begin their own exploration of the G’Bay Coast. The book is an investment and it will add to your understanding and appreciation of a somehow overlooked corner of Ontario that would draw Canadian travellers if it was anywhere else but in their own backyard! 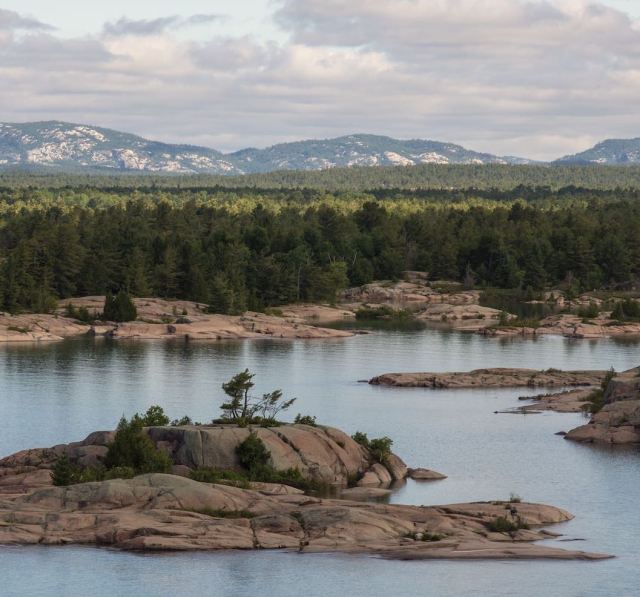 My brother and I came back from our PEI teaser of an introduction to the Georgian Bay coast and were already planning a return visit, something a bit longer and more ambitious than our PEI tour.

The fact that this paddlers’ paradise is less than three hours from the urban sprawl of the Toronto area is remarkable. You leave the city at 7 a.m. and at 10 you are paddling down the east side of Franklin Island or on your way to the Minks or McCoys!

Hincks Island stop at the bottom of Beaverstone Bay

If you’re a paddler other than a beginner – i.e at least advanced novice – you should be okay as long as you know when to

It will be the weather that dictates the route; as paddlers, we listen and adapt.

our beached canoe on Used To Be Island

An open canoe – even one without a spray skirt – is fine most of the time when paddling the coast. Since our first visit, my brother and I have spent another 20 days or so on various canoe trips along the shore of the Bay and have only experienced seriously rough water once. That time it prompted us to scrap a much-anticipated return visit to the Bustards, a collection of some 600 islands and rocks at the bottom of the French River delta. After passing by the fishing camp pictured above,  we headed for the mainland shore and a quieter day’s paddle behind various islands, thanks to the 30+ km/hr. winds out in the open water.

A kayak is without a doubt the safer option for a paddling adventure on the Bay. A much lower profile, a lower center of gravity, a fully enclosed cockpit – the advantages are there. I would get to find that out myself on an eight-day trip from down the coast from Killarney to Snug Harbour, which is just outside of Parry Sound. [See here for a map.]

chillin’ on Family Island – a sunny day on the Bay

The coastal waters can be busy with boat traffic during the prime summer months, especially on the weekends and especially the stretch from Parry Sound down to Port Severn.  Our solution has been to stay north of Parry Sound and to go in June before Canada Day or after Labour Day in September.  We rarely see other paddlers and only a few fishing boats out there and getting a great campsite is never an issue.

our sheltered campsite in Fox Bay on an overcast afternoon

sunset on the Bustards in Georgian Bay

beaching our canoe near the main Bustard Rocks lighthouse 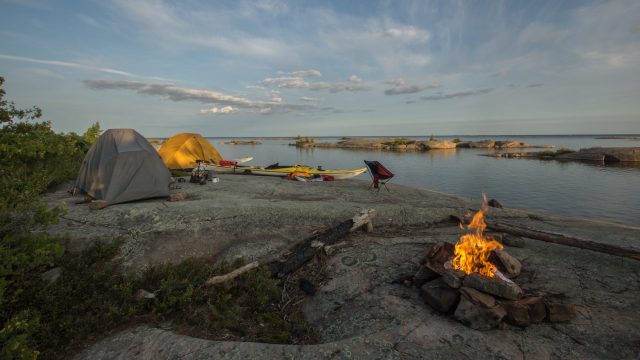 campsite on Tanvat Island in the Bustards 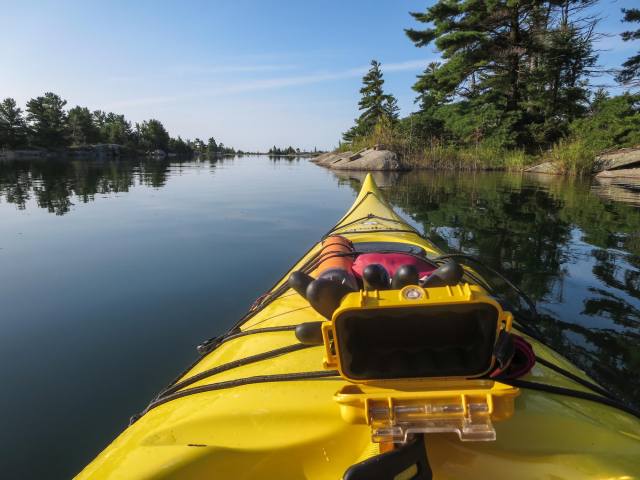 portrait view of the sunset from Pickerel Bay CS633 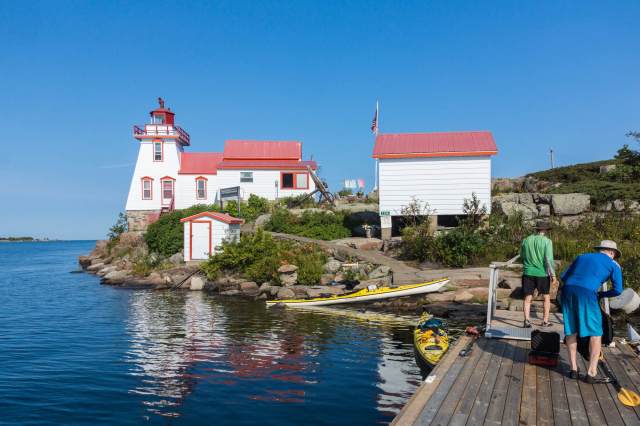 a view of the Pointe au Baril lighthouse from the dock

our tents on the rocks – Garland Island northern Minks

a paddler in Franklin Island Channel

A Region Rich In Geological and Human History:

Not only is the coast an open book of geological ages, but it is also saturated with layer upon layer of cultural history.

In the photo below, we would paddle around that island in Black Bay to the west end of the Voyageur Channel and beach our canoe at a spot we now know as la Prairie des Français. We had paddled by the flat open area a few times but did not know the story. This is where the voyageurs would set up camp for the night after their one-day descent of the French River from Lake Nipissing!  It was Toni Harting’s book The French River: Canoeing The River of the Stick Wavers that alerted us to the history of the area and in so doing added an extra dimension to our “explorations”!

Tanvat Island Portage in the Bustards  – west side 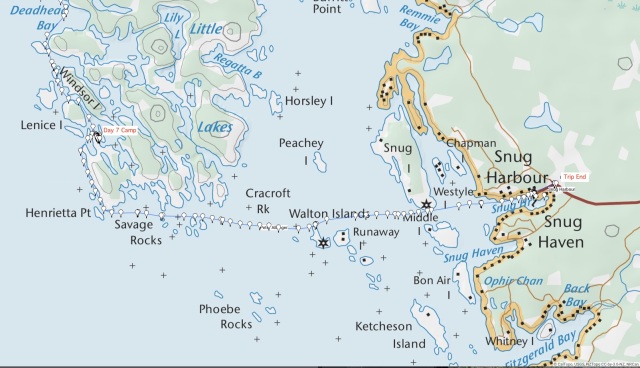 In the meanwhile, more reading makes clear how little I knew about G’Bay and its natural and cultural history.  It is a Biosphere Reserve whose significance was recognized by the United Nations UNESCO branch in 2004. As the website states in its webpage dedicated to the Bay –

The Georgian Bay Biosphere Reserve comprises the largest island archipelago of the North American Great Lakes. Known locally as ‘The Thirty Thousand Islands’, it consists of a complex association of bays, inlets, sounds, islands, and shoals lying along the edge of the Canadian Shield bedrock, whose low lying hills and ridges characterize the adjacent mainland. This topography supports a rich mosaic of forests, wetlands, and rocky habitat types with associated biodiversity. It is also noted for its extraordinary scenic views which attract large numbers of summer residents, cruising boaters, and seasonal visitors.

While the boundaries of the Biosphere do not include the north shore of the Bay and its many islands  – i.e. the stretch up from French River delta to Beaverstone Bay and Philip Edward Island – what is found within the lines on the map above more than lives up to the description. The north shore from Key Harbour offers more of the same and has less boat traffic than the section from Parry Sound to the Severn River and Midland.

Georgian Bay & The Group of Seven

While the Georgian Bay coast may be paddlers’ eye candy, the region also attracted some members of the Group of Seven. From the La Cloche Mountains and Killarney in the north to Go Home Bay and points south, these painters found inspiration in their travels up and down the Bay. 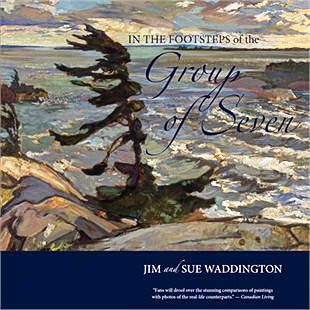 Thanks to Jim and Sue Waddington’s  35-year quest to stand in the very spots where these painters set up their easels – spots they arrived at through a lot of detective work and on-the-ground searching –  we get a book like their  In The Footsteps of the Group of Seven.  It includes dozens of fascinating examples of their camera perspective matching that of the painter’s eye. While their search led them all across the country, in Georgian Bay they found a number of locations whose scenery inspired Group members to put it to paint.  Here are a few from the Go Home Bay area – 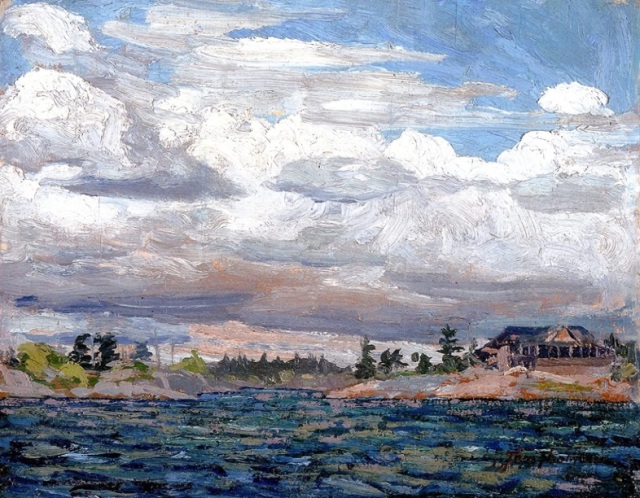 Planning Your Own G’ Bay Kayak or Canoe Trip:

If you are looking for a one-week escape this summer – vaccinated or not! – then a Georgian Bay kayak or canoe trip with a put-in at Chikanishing or Snug Harbour or Hartley Bay may be just the answer!

The following trip reports include maps and information on

and other aspects of the adventure that should help to organize your own Georgian Bay adventure. 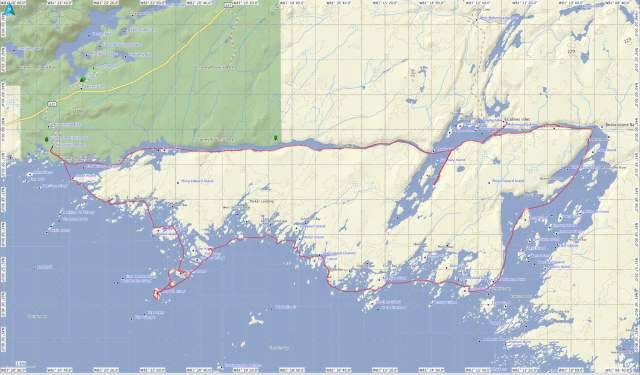 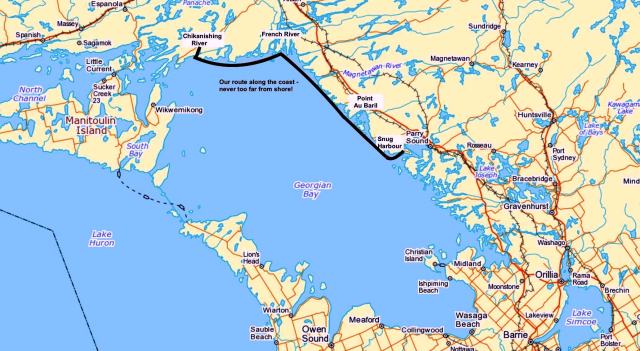 Days 5 & 6  S of Byng Inlet To Hangdog I. Channel To Garland Island (Minks)

The French River Delta and the Bustard Islands: 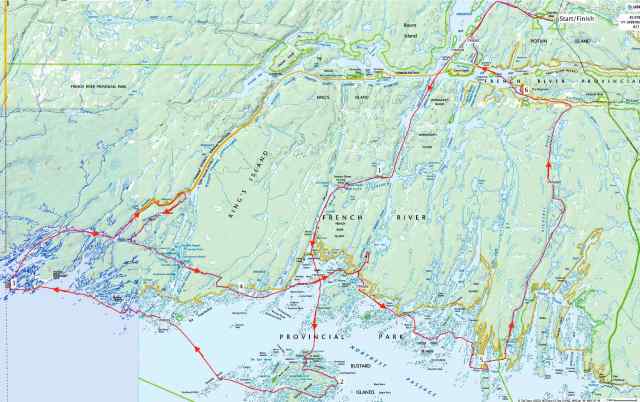 Day 2 – From The Elbow to the Bustards

Day 4 – From Eagle Nest Point to East of the Fingerboard

Day 5 – To Bass Creek And The Park’s East Side