Previous Post: Day 2 – From the Elbow  To The Bustard islands

Day 3 – From The Bustards To Eagle Nest Point 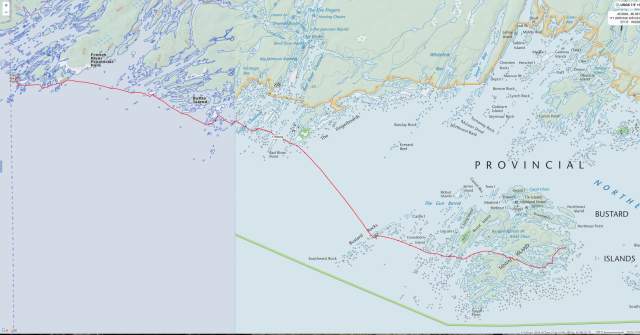 It was 6:45  and we were up with the sun. Given our east side of the Bustards location,  we took a few shots of the brightening horizon before we turned to the tasks at hand – packing away the tent and everything that was inside it and getting breakfast going. 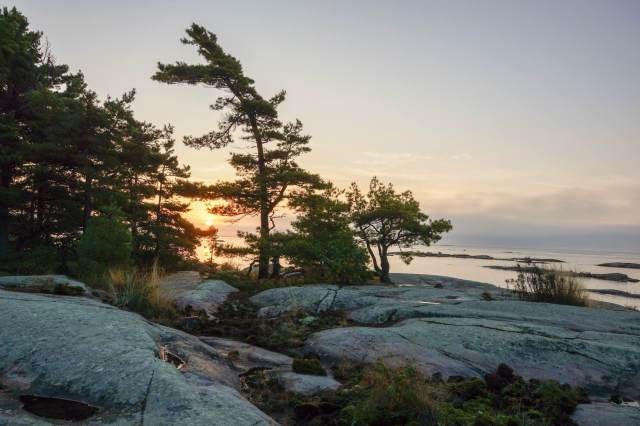 This day we were headed to the west end of French River Provincial Park and figured on about twenty kilometers of paddling. A few would be over fairly open water but, if it was really windy and the waves were up,  there was always the shelter provided by some of the 30,000 islands that Georgian Bay is known for. 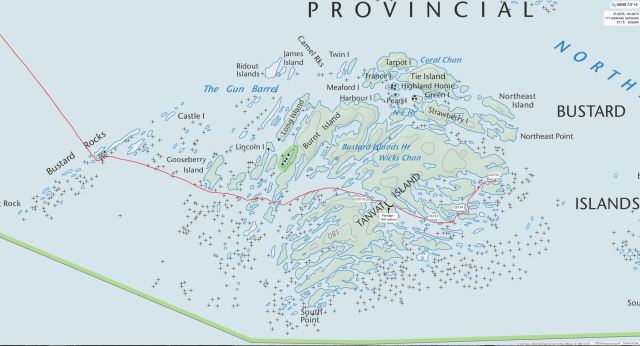 The good weather would continue and we got to spend the day without a worry. Paddling around the south end of the Bustards and towards the Bustard Rocks lighthouses? No problem!

However, we had something else in mind! We decided to check out the reported Bustard Islands Portage. Just SW of our campsite there is a narrow land bridge which connects the two halves of Tanvat Island.  When we got to the take-out we found a cairn at the start of a 75-meter “path” over and on the south side of the rock outcrop. At the far end was another cairn.  Now we know! Different weather conditions would make it quite useful.

the east end of the Tanvat Island Portage

We put our canoe into the water pictured below and continued on through the Bustards,  made up of some 600 islands and rocks of various sizes.   After two days of very scenic paddling we just had to say it again – “Man, this is so incredibly scenic!”  It would not be the last time we verbalized some version of this thought! For pure sustained “eye candy” I don’t think anywhere we’ve paddled in the Canadian Shield rivals what is here!

paddling through the Bustards to the lighthouse

We were heading for the Bustard Rocks from the east!  A month before Rick, Ken, and I had approached them by kayak from Point Grondine with water conditions much like we were facing this morning.

From the south end of Gooseberry Island, we got a nice view of the three lighthouses, the main one in the middle and the two smaller by a third ones.

approaching the Bustard Rocks light towers from the east 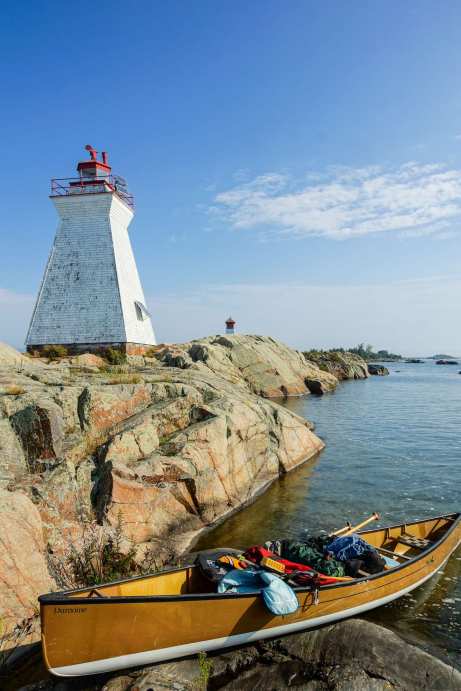 beaching our canoe near the main Bustard Rocks light tower

We pulled our canoe up on some flat rock just south of the main tower and hopped out to pay our respects! Out came the cameras as we walked around looking for interesting angles to frame.

the Bustard Light towers – a view from the South

the top of the main Bustard lighthouse

Bustard Rocks – the concrete foundation of the light keeper’s cottage

The lichen-covered concrete foundation just north of the main light tower once had the keeper’s hut sitting on it.  When the lights were automated in 1951, the keeper left and the hut deteriorated badly until it was finally demolished in the mid-1960s.

A bit of googling did turn up an undated image – perhaps from the 1930s or 40’s –  of what was once there. In the photo, a boardwalk to the small south beacon is visible, as are the keeper’s cottage and another building to the north of it.  Apparently, the keeper Tom Flynn and his wife, who manned the lighthouse from 1928 to their retirement in 1951, brought bucket loads of earth to the rock and created a productive vegetable garden. None of this is evident today – there is only the stark beauty of the three light towers with some knee-high bush on the Bustard Rock.

Bustard Rocks view to the south-west

If you want to see a few more shots of the Bustard Rock lighthouses, check out this post from our kayak trip down the coast the month before.

One last look at the lighthouses as we paddled away on the west side and then it was a half-hour – from 10:30 to 11 – to do the slightly more than three kilometers over to the collection of small islands and rocks known as the Fingerboards.  A bit more dreamscape paddling through a maze of rocks and islands and we started looking for a shady spot for an early lunch.  The image below shows what we found.

Out came our Helinox camp chairs – the ultimate luxury for two canoe trippers who obsess about the weight of everything! – and out came the lunch bag. On the day’s menu was the usual Thai soup and Wasa bread with – well, it is usually peanut butter but this day it would be mushroom paté. We enjoyed the reprieve from the sun as we took in the scenery.

our shaded lunch spot on an island in the Lodge Channel

looking over the rocks in Georgian Bay’s Lodge Channel

the Bay side of our Lodge Channel island lunch spot

We took no more photos until we got to our campsite for the day at the west end of the Park boundary.  There are a number of designated campsites available but we liked the sound – and the location – of “Eagle Nest Point” so that was our target.

When we got there we found – no, not the eagle’s nest! – but a fantastic site (CS 832 – old #816) with great views out towards White Rock and Georgian Bay as well as the rock island-speckled bay to the north. There were a number of sheltered tenting options for our four-person tent, as well as an excellent take-out spot for our canoe.  We were home for the day! 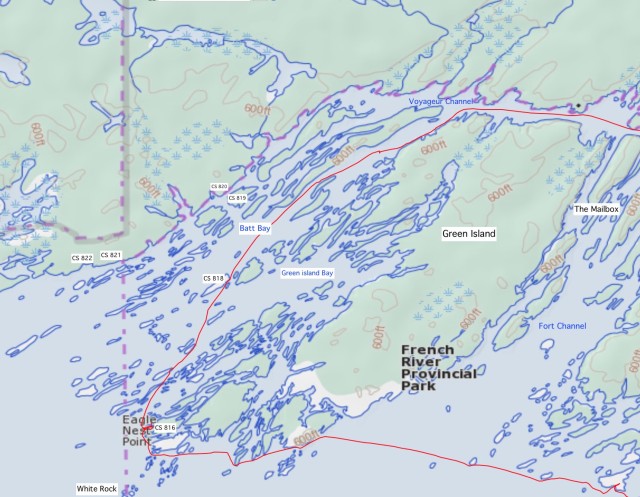 Eagle Nest Point and Surrounding Area – note– CS #s are the old ones.

looking over Green Island Bay from our Eagle Nest campsite 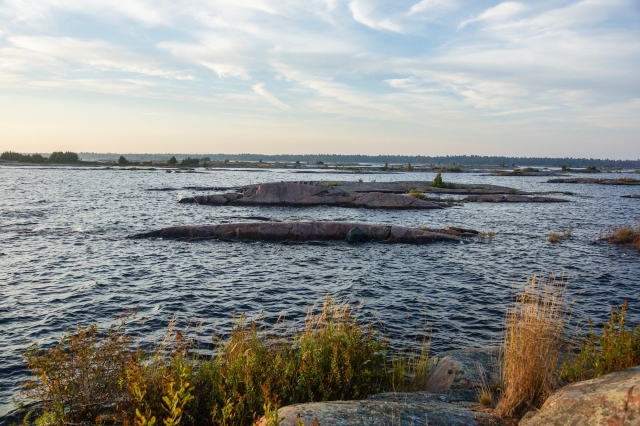 taking in a sunset at Eagle Nest Point on Georgian Bay 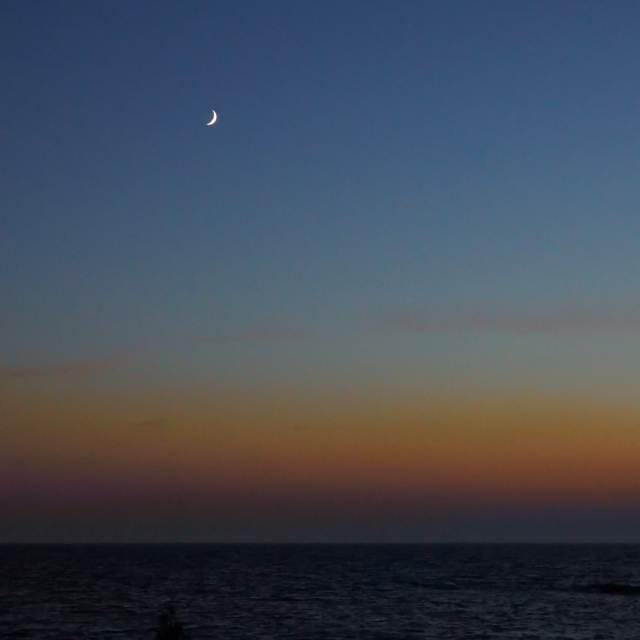 Day 4 – From Eagle Nest Point To CS 723 East of The Fingerboards Is.