Puerto Varas in Chile’s Lakes Region – Top Things To Do!

Related Post:  By Bus And Boat Through The Andes  – The Cruce Andino From Puerto Varas To Bariloche 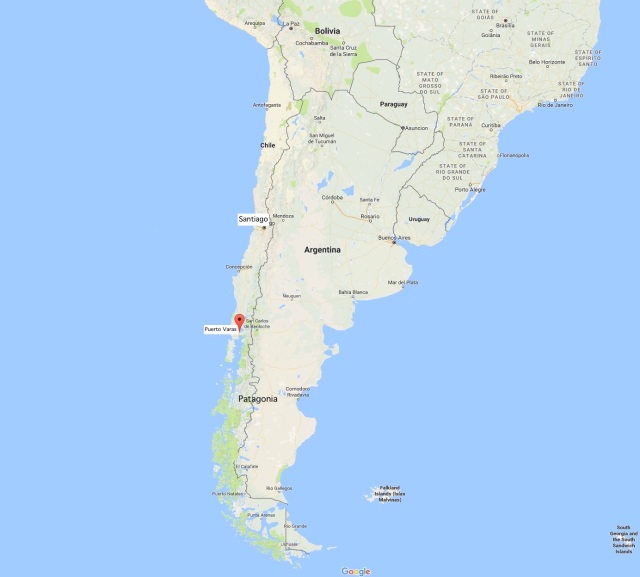 Chile’s Región de Los Lagos , about one thousand kilometres south of Santiago,  is Region X of Chile’s fifteen administrative regions and sits just to the north of mythic Patagonia.  Landing at El Tepual International Airport near Puerto Montt, a large port with access to the Pacific, I headed up twenty kilometers to Puerto Varas, its smaller (41,000 population instead of 175,000) and more charming little sister. I would later spend a couple of days in Puerto Montt and discover that it is a nicer place than the guide-books make it out to be – but still nowhere near as chilled out as Puerto Varas! 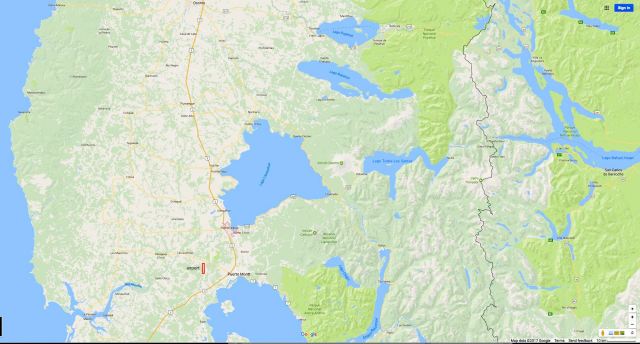 The town is located on the southwestern shore of Chile’s second largest lake – Lago Llanquihue (pronounced Yankee Way!) and traces its roots back to the early 1850’s with the arrival of a couple of hundred families from Germany.  They would be the first of a massive wave of German immigrants attracted by the agricultural riches of the area stretching all the way up to Valdivia.   The name of the town’s mayor these days, Álvaro Berger Schmidt, is just one of the echoes of this past.

Of course, left out of the story are the pre-European inhabitants of the region, the Mapuche whose territory it was in 1500.  The very word “Llanquihue” means “hidden lake” in their language. Not far from Puerto Varas is the Monte Verde archaeological site with evidence of human habitation going back 15,000 years!  While the bits of German culture tugged at my heartstrings – my mother was German and we spoke German at home – it would have been interesting to talk with a local person familiar with the Mapuche story and the way things are these days.

Ojibwa dream catchers(?)   in Puerto Varas at the crafts market

Over the years the town has also taken advantage of the beauty of its surroundings.  I was there in February, the equivalent of August in the northern hemisphere, and could see that it is a popular tourist destination with Chileans, even if it is not nowhere near as  glitzy and moneyed as nearby Bariloche on the Argentinian side.   It makes an ideal base for a two or three-week stay in the region, especially if you fancy outdoor activities like kayaking, hiking, volcano climbing, and bicycle touring.  The town’s main street is lined with agencies catering to all the above and more!

From April to September things get wet in the Los Lagos region.  The four-month period from December to March see less rain and fewer rain days; the two prime months for Chilean tourism are January and February so you can expect things to be busier and more likely to be booked then. See the website weather 2 for a comprehensive Puerto Varas weather profile.

See here for Google’s 3-D satellite view of Puerto Varas and vicinity.  The web-based app provides an interesting perspective. It takes a few seconds to upload.

What To Do When You’re There

What follows is my incomplete list of things to do in Puerto Varas.  Let me know what I’ve missed in the comments below!

Bring your own bike or rent one in Puerto Varas – and then do the three-day ride around Lago Llanquihue.  Over the past few years the various towns and villages have created a bike lane that circles the lake and makes the ride even more stress-free. Here is one travel agency’s description of the ride. 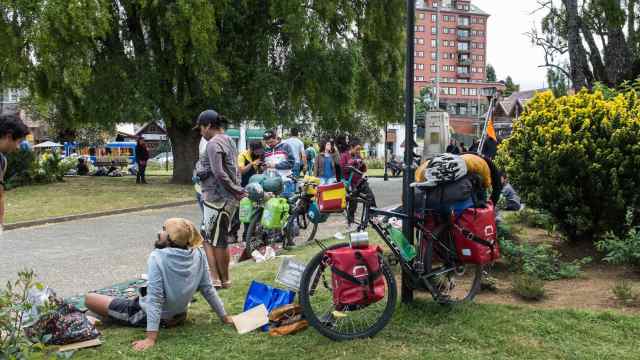 If you are really keen you can also do the ride from Puerto Varas to Bariloche, making use of a boat ride or two to get you to the next road.  I talked to cyclists – Chilean, Argentinian, and European – who were doing exactly this over a two-day period.

This was definitely on my list!  When I got there I wandered downtown from my hilltop hostel and gazed east across Lago Llanquihue to the two main possibilities – Volcán Osorno and Volcán Calbuco.

the view of Puerto Varas from the Hostel Melmac Patagonia 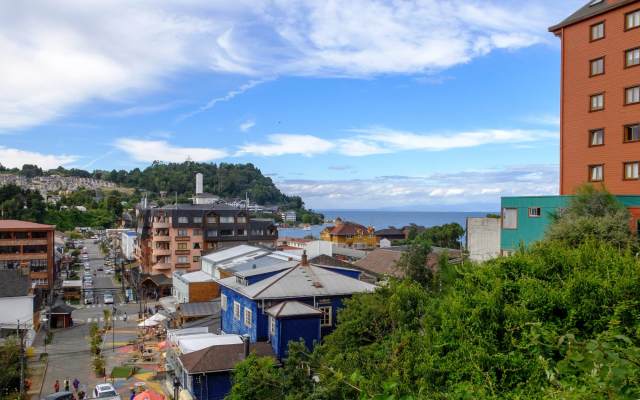 another view from the Hostel Melmac hilltop location 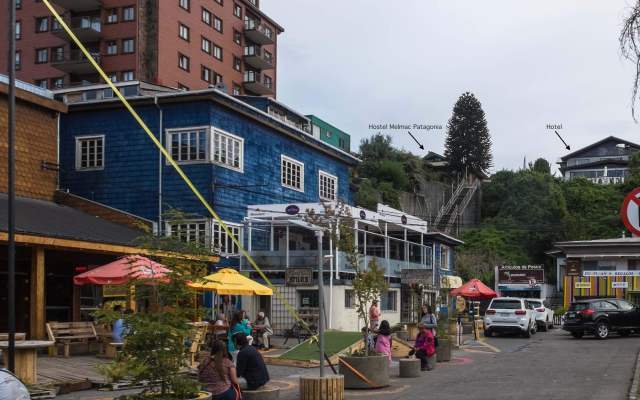 looking up to the Hostel Melmac on the hilltop

My first afternoon view of the two volcanoes – Osorno and Calbuco.  The clouds have moved in and covered their tops.  A couple of days later I would be standing on top of the one on the left side – Volcán Osorno!  Check out the details in this related post – 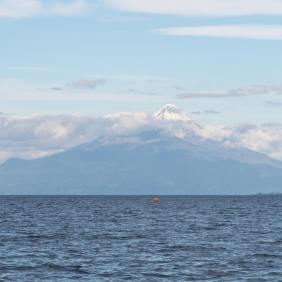 3. The Cruce Andino To Bariloche

If you want something a little less active – I know I did after my volcano climb! – then there is a boat ride or two you can check out.  Sailing on Lago Llanquihue  – or on the next large lake to the east, Lago Todos Los Santos – is a popular day trip with many visitors.  The most ambitious one – and the most expensive at $280. U.S. – is the Cruce Andino, a twelve-hour journey through the Andes by bus and boat that takes you through some stupendous scenery.  You can spend a night or two in Bariloche on the Argentinian side and then take the boat back – it is half-price for the return! – or, like me,  take the bus via Villa La Angostura and Osorno.  See the post below for photos and maps of the Cruce Andino option –   By Bus And Boat Through The Andes – The Cruce Andino

The downtown section of the town is a very manageable couple of main streets with an assortment of restaurants, hotels, and shops selling outdoor gear and clothing.  To no surprise – given the German/Spanish roots of the local culture and the abundance of seafood – I did not find many places that have embraced vegetarian cuisine with any enthusiasm!  The one vegetarian restaurant Masala Chai is located within one hundred meters of my hostel so I ate there four times over my three-day stay!

5. Walking Along The Puerto Varas Waterfront

The shore of Lago Llanquihue draws many of the town’s visitors.

canoes on the shore of Lago Llanquihue

I grew up in a mining town on the Canadian Shield with its countless lakes and rivers and seemingly unending boreal forests. It was the homeland of the Anishinaabe until they, like the Mapuche, were overwhelmed by more numerous newcomers with superior technology. Well, maybe not in the case of those Algonquin-style canoes! I was surprised to see a version of them sitting on the beach of Llanquihue.

And as I walked along the waterfront I also passed by a hotel with the name Radisson, the last name of the very same Pierre Esprit –  coureur de bois and hero of my youth!  Why is there a hotel in Puerto Varas named after a seventeenth century adventurer  who made a name for himself on those rivers of the Anishinaabe world?

The Casa del Turista sits on the top of a manmade spit that juts into the lake; behind it park benches and grass invite visitors to sit down while they turn their gaze to Osorno.  I love the Lonely Planet’s description of the scene –

“Two menacing, snowcapped volcanoes, Osorno and Calbuco, stand sentinel over picturesque Puerto Varas and its scenic Lago Llanquihue like soldiers of adventure, allowing only those on a high-octane quest to pass.”

A bit over-the-top, you’d have to agree!  Osorno is some forty kilometers away and is worth a “wow” on first seeing it but that’s it.  And “snowcapped”  no longer describes Calbuco since it erupted in 2015.  Tour groups leave Puerto Varas for Osorno daily for walks up the slope of the volcano to the beginning of the glacier. That’s where they turn back; only those equipped for a mountaineering adventure continue to the top.  Six hundred climbers a year make it.

There are a few large – and expensive – hotel options in Puerto Varas.  Two of them fill the left side of the panorama below and offer rooms with a view – the Hotel de los Volcanes with its Dreams Casino and the Hotel Radisson.

The tourist office offers a brochure – Paseo Patrimonial – which highlights aspects of its German past, especially as seen in architectural style. I never did pick up the guide but did see a few of the buildings on the list.  If you were really motivated you could spend a day just focussed on this theme!

Still active is the Club Alemán on Calle San Francisco, complete with a restaurant.

My time in the town coincided with an annual celebration of things sweetly German – El Dia del Kuchen – on the first Saturday of February. I walked down to the town square after returning from my Volcano Osorno climb to find the scene below – hundreds of people gathered on a weekend afternoon around tables laden with German-style cakes just like the ones my mother used to make! Also flowing freely were German-style craft beers. 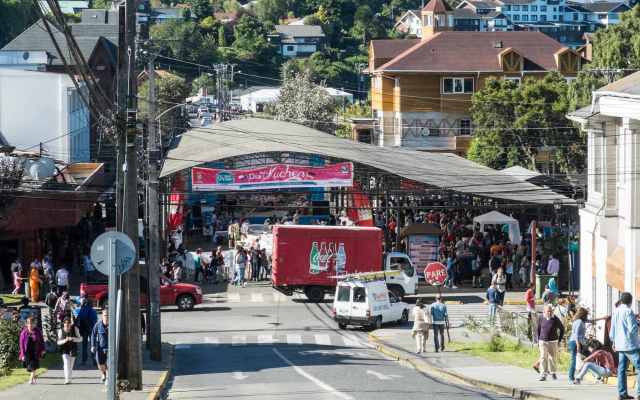 Another sign of Germanic influence on the town’s past was the church which is an important part of its skyline.  You can see it in the photo below, which I took from the north end of the shore walkway on a cloudy day.

I did get closer to the Roman Catholic church – the Iglesia Sagrado Corazón – and its three spires. Inspired by Marienkirche in Germany’s Black Forest region,  it is made of wood and is clad with tin sheeting that reminded me of similar construction that I saw in Punta Arenas, a Chilean town some 1300 kilometers south on the Strait of Magellan. 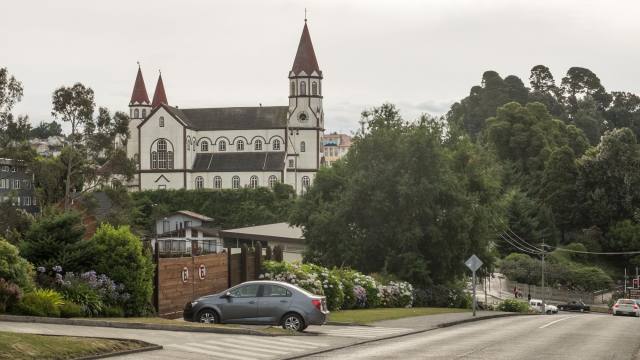 A plague in the front foyer of the church notes the financial contribution of the German people to its renovation and maintenance.  The  church was built between 1915 and  1918 after the first one burned down. 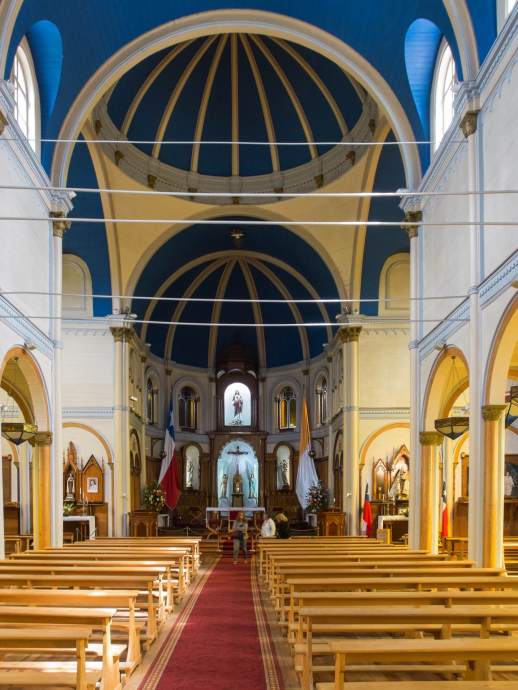 An iconic Puerto Varas shot – unfortunately not one I thought of taking! – is taken from some distance to  the west and has the church in the foreground and the lake and Volcán Osorno in the background. Click here to see what I mean!  The telephoto lens compresses the scene nicely!

Worth a day trip is a visit to Puerto Varas’ big sister of a city – if only to feel the contrast between its hustle and bustle and the laid back scene in Puerto Varas.  It is an inexpensive bus ride or a slightly more expensive trip by taxi.

An upcoming post will highlight some of what Puerto Montt has to see!

8. Hiking In The Nearby National Parks

Something I did not do was hiking on the Chilean side of the Andes, given that my focus was the trails in the mountains near Bariloche.  Not far from Puerto Varas is Vicente Pérez Rosales National Park.  The local trekking/climbing agency I used for my Volcan Osorno climb – Huella Andina Expeditions –   offers hikes of various lengths and difficulty in the park and elsewhere; so do a number of other agencies in town.  It might be worthwhile checking out the various options to see what is possible.

Let me know what you would add to the list!

This entry was posted in Uncategorized. Bookmark the permalink.