A Train Ride Across the Highlands of Sri Lanka

Sri Lanka’s ultimate train trip runs 290 kilometers from the capital all the way east to Badulla.  In his excellent blog The man in Seat 61,  train aficionado Mark Smith says that it is “a classic journey that’s easily the best train ride in Sri Lanka”.   As you make your way from one end to the other,  it is possible to interrupt your journey with connections to the old capital of Kandy and the hill station of  Nuwara Eliya. These towns are two of Sri Lanka’s most attractive.

The best part of the ten-hour trip takes you from Nanu Oya, ten kilometers by road from Nuwara Eliya, to Ella across the hill country and past tea plantations that sometimes come up right to the rail tracks. Cloud forest and the highest altitude rail stations in the country – 1800 meters higher than Colombo –  await!  On the Google map below the green line indicates the route –

We had spent the previous evening in Nuwara Eliya and in the morning drove by bus to Horton Plains National Park and the World’s End Trail.  Then, our easy-to-walk World’s End circuit done,  we returned to Ambewela and waited for our train.  The memorable ride would take us to Ella over a two-hour time span.

Ambewela at 1828 meters a.s.l. and nearby Pattipola at 1892 meters are the two highest train stations in Sri Lanka and among the top 20 in the world. The line was built by the British during colonial times to haul tea from the highlands down to Colombo; now it carries tourists! 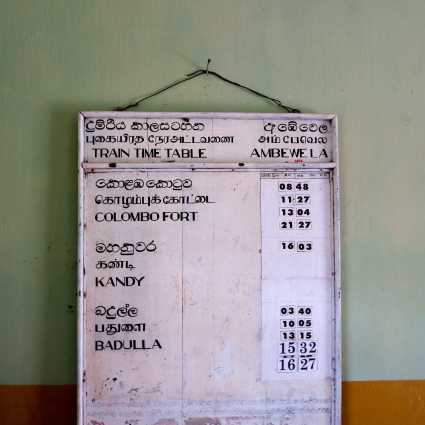 As we waited a number of trains passed by; they were all heading north and west to Colombo. A train aficionado would be able to identify the engines and the carriages and their respective vintages; I had to content myself with noting their various colours! 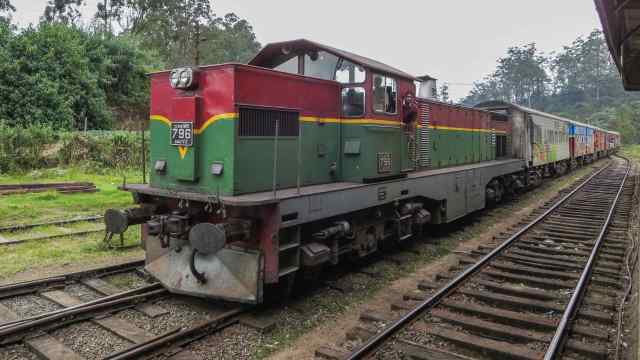 While the Sri Lankan government owns the rail lines and runs most of the services, there are a couple that are privately run – the Exporail Car and The Rajadhani Express.  The cars below date back to 1970 and as the image below shows, they are looking a bit tired.  And, if getting photos of the views is your mission, it sounds like you’d be better off on a regular train like the blue one we were waiting for.  Here is what the man in seat 61 says about the Rajadhani –

The Rajadhani car dates from 1970, so externally it’s older and grubbier than their website suggests.  But it’s easy to book online, it’s very comfy, well air-conditioned, has effective WiFi  – if you correctly enter the world’s longest WiFi password, that is – and is very popular with tourists.  On the downside you are sealed in behind small and very grubby windows, making it a poor way to experience the journey.  Taking photographs of the scenery is almost impossible, so you are better off in regular 2nd class.  source: here 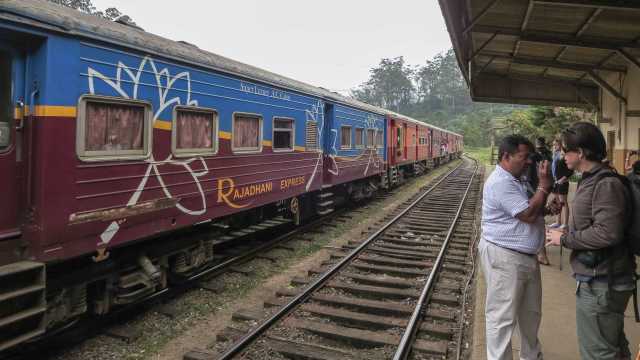 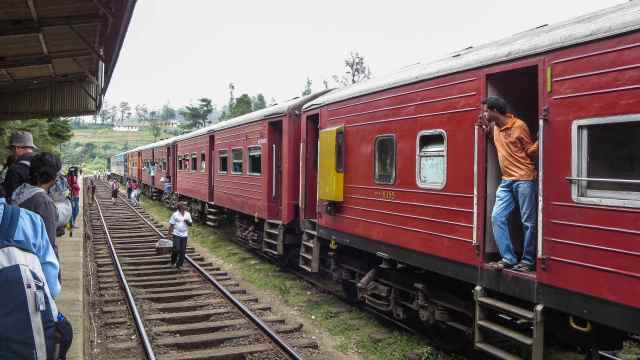 a train heading to Colombo

In the image below a tourist watches me as I include her in my photo of the observation car.

The blue Chinese-built trains were the newest ones I saw; they were introduced in 2012. We had reserved second-class seats and, best of all, it was very easy to take pics.  I am almost certain that the windows open so dirty windows were not an issue.  I am not sure why I did not use my Sony DSLR for any of the pix in this post; all but the last were all taken with my point and shoot – a Canon Elph 330 (aka Ixus 255).

our train finally arrives at Ambewela

And then we were on our way – taking in the fifty shades of green often covered in a shroud of mist. Every once in a while we would enter a rock face through one of the 44 tunnels of the route and views would be replaced by the sound of screeching wheels on the rails. 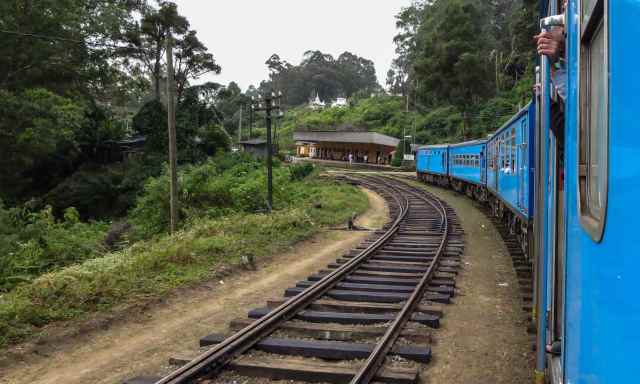 the blue train on its way to Ella –

passing through the cloud forest of the Sri Lankan highlands. 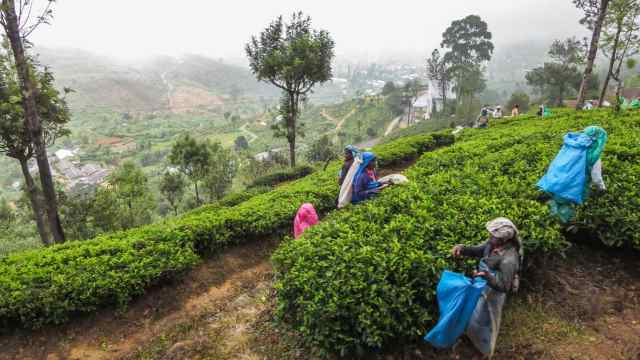 Historically there are two Tamil communities in Sri Lanka. There are the Tamils who were brought over to the island by the British in the 1840s to work on the tea plantations; they are referred to as the Indian Tamils.  There is a much older group- the Sri Lankan Tamils – who have been a part of the history of the island going back 2000 years.  For some of those years, they actually ruled parts of it. Tamils make up about 20% of the population of the country – and while they are more numerous to the north and along the east coast, they are also very much a part of the hill country that this post describes. (See here for a map indicating ethnic group distribution.)

One of these years I hope to return to Sri Lanka with my bicycle, take the train up to Jaffna, and then travel down the east coast of the island to Trincomalee and beyond to experience another aspect of a beautiful island with a fascinating, if somewhat painful recent history. As I high school teacher in Toronto, I came to know a number of students from Sri Lanka, some Sinhalese but mostly Tamil. Beginning in the early 1990’s many had arrived as refugees from the civil war going on.  Outside of Sri Lanka, Canada is the home of the single-largest number of Tamils.

Common in Sri Lanka are trilingual signs like the one below at Haputale. The top row has Sinhala letters and the middle has Tamil. 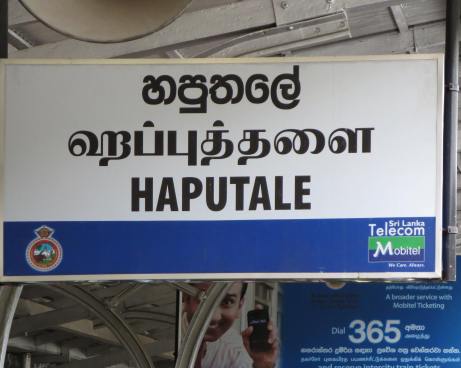 a view of Diyathalawa from the train

As the photos of the various train stations and the countryside show, buildings and surroundings are mostly well-kept and tidy.  Garbage and litter are rarely seen and the smell of sewage – one of my overriding impressions of travelling the top half of  India – is thankfully absent.

Ella Station – backpackers on the platform

We got to Ella at about 5:30.  We had set off from Nuwara Eliya at 6:30 a.m. for Horton Park and had been rewarded by a nice ramble in Horton Plains Park and then this train ride.  After we checked into our Ella hotel, my roommate and I walked down to The Grand Hotel for supper. Behind the hotel is a garden with a fabulous view of Ella Rock and the Gap.  The next morning we would hike up to the Rock and look back at the hotel! Here is the Rough Guide review of Ella –

Sri Lanka’s most beautiful village, offering verdant walks amongst the surrounding tea plantations and a marvellous view through Ella Gap to the plains below.

Next Post: Hiking The Hills Above The Hill Station of Ella

The Man In Seat 61‘s write-up on the Sri Lanka rail system is an essential source of information if you are planning to use the train to get around the island.  This site – not a commercial venture but the personal site of Mark Smith –  has everything you need in terms of timetables and reviews of the different trains. As well, it provides historical background on the various trains you would see pass by.  Click on the title  –

I did this tour – The Highlands of Sri Lanka – with Exodus Travels, a small-group travel country based in the U.K. there were 12 of us in the group, a mix of older Brits and a couple of Canadians. I’ve used Exodus at least a dozen times when the organized trip option makes the most sense.  I always come away impressed with the guides and the way that everything on the logistics side just falls into place.

A Fascinating Journey, a review of a book written by Hemasiri Fernando titled The Uva Railway: Railway To The Moon appeared in The Sunday Times Sri Lanka (May 1, 2016).  It gives a brief summary of the author’s detailed treatment of the history of the line and may well lead train buffs to get the book itself. A search for the book at Amazon.com, unfortunately, did not come up with it; a Colombo book shop may be the place to look.

Lou Wilson uploaded to Youtube some video of his 2012 train ride from Kandy to Ella.  He captures the spirit of the journey beautifully.

This entry was posted in Easy Travelling, hiking/trekking, Sri Lanka. Bookmark the permalink.