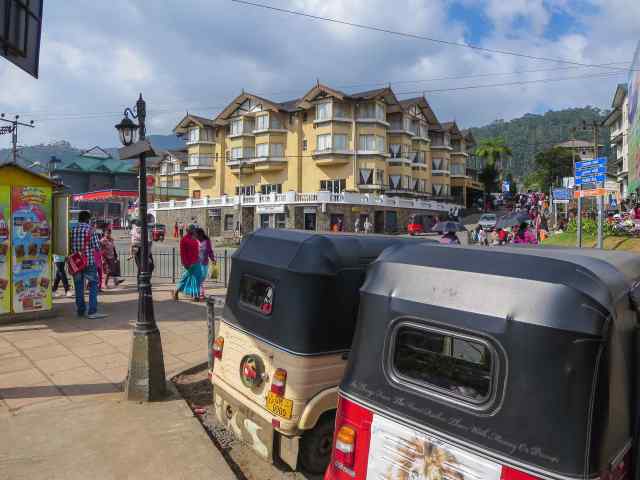 an evening  view of our hotel in Nuwara Eliya

We were out of our hotel in Nuwara Eliya and on the road by 7:00 a.m. the next morning.  Our destination for the day: the hill station of Ella about 60 kilometers to the south-east with one major diversion – a short hike in Horton Plains National Park.

The early start would hopefully allow us to get to the viewpoint at World’s End in the park before the clouds started rolling in from the south and hid the spectacular views. We gained a bit of altitude as the switchback took us up to the plateau.  The mist hung in the valley and created an enchanting scene.

on the road to Horton Plains National Park from Nuwara Eliya

Then I spotted a dozen windmills of the Ambewela Aitken Spence Wind Farm. It gave the scene an unexpected futuristic look.

a dozen windmills in the valley mist south of Nuwara Eliya

Following regional highway B582 to Pattipola, we then continued on toward  Horton Plains National Park entrance. There was another surprise – looking west over the valley  I spotted Sri Pada‘s distinctive profile on the horizon.  Total distance – about 35 kilometers!  Sri Pada’s 2,243 m (7,359 ft) height and the lack of any other peaks of similar size nearby means it really stands out!

Two evenings before we had climbed up the pilgrimage mountain with thousands of Sri Lankan Buddhists keen to get close to what believers say is a sacred footprint left by the Buddha on one of his three legendary visits to the island.  Sri Pada would also be given the name Adam’s Peak by visiting Arab traders to fit with their Muslim stories.

Well, there it was and here we were – looking at it from the Horton Plains! 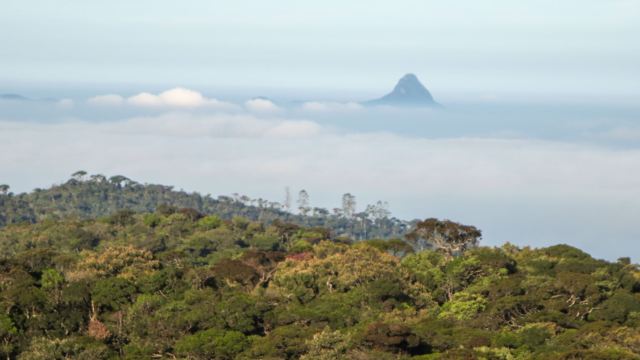 On to the park, still named after a British governor of Ceylon from the 1830’s. [The Sinhala name for the area is මහ එළිය තැන්න (Maha Eliya Thenna – “great open plain”)] We would spend the next three hours on an easy circular hike that took us past the three main attractions.  The sign below lists them.

There are other hiking trails in the park but this one is by far the most popular. The yellow line indicates the trail.  Beginning at the park entrance at the top right-hand side, we walked down to the World’s End at the bottom and then came back via Baker’s Falls. Total distance: about 9 kilometers with perhaps 90 meters (300′) in altitude gained or lost on the way.  The terrain is a mix of cloud forest and grassland and the trail is well-worn thanks to the many visitors.

I found the above GPS track uploaded by  Miriup at wikiloc;  check it out here.  Using the slider on the elevation chart, you can walk the trail and get a feel for its ups and downs!  It really is an easy half-day walk.  We were definitely the exceptions with our hiking boots, trekking poles and, for some, even full gaiters!  Shorts and running shoes seem to be more typical!

hikers getting read at the Horton Trail Y – pointing my camera into the sun was not a good idea!

In the above image, we have come to the initial Y in the road and everyone is getting ready – sunscreen lotion, water bottle, camera, sun hat!  To the right the trail takes you to Baker’s Falls; to the left, it goes to Mini World’s End and World’s End.  Given that views tend to be better earlier in the morning before clouds have moved in from the coast, a clockwise direction is advisable.  Unfortunately, there are no guarantees!  We found the view clouded over as we passed by Mini World’s End.

a view from Mini World’s End

What the trail does is take you along the edge of a cliff that plummets 1000 meters from your 1800-or-so- meter vantage point to lowlands just below.  Supposedly, on a clear day you can see all the way to the south coast of the island.  We would not be so lucky! 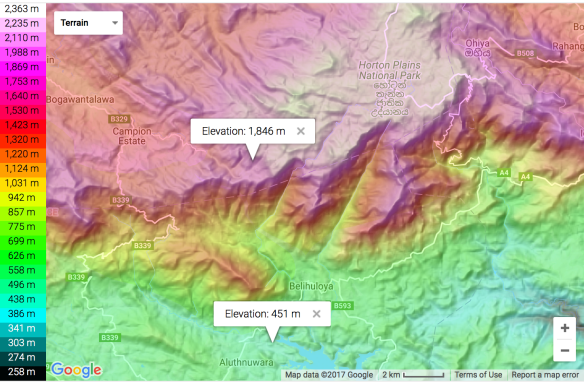 a bit of mist obscures the view at Mini World’s End!

A bit further on from Mini World’s End is World’s End itself. We arrived there to find the view even more clouded over than the one we had left.  A group of walkers was already sitting there on the platforms and gazing into the thick fog.  While it wasn’t what we were hoping for, it had a beauty of its own. 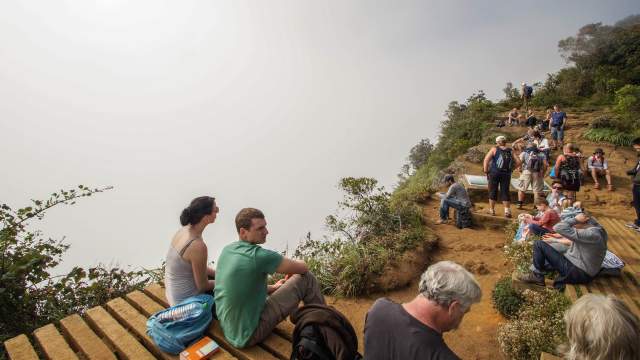 panorama of World’s End with mist down below

I thought of Mount Fuji and a Bonsai tree as I framed the shot below!

And then it was back to the World’s End platform for one last look before taking the trail down to see the twenty-meter drop of Baker’s Falls.

the viewpoint at World’s End in Horton Plains Park

As the image below shows, we would lose some altitude as we went down to the river that flows by.

It is the  Belihul Oya,  a tributary of the Walawe.  (The Walawe Oya is one of three rivers (along with the Mahaweli and Kelani) that have their headwaters on the Horton Plains plateau. See here for a map.) 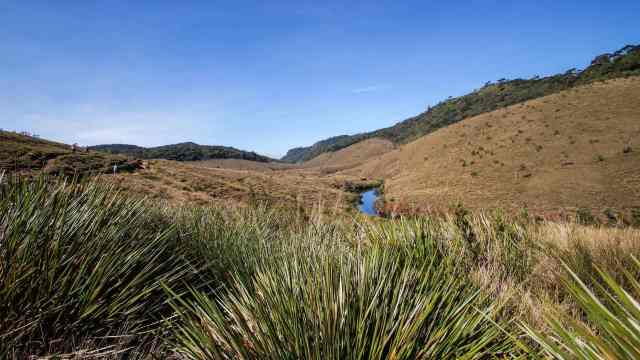 We spent some time at the Falls, framing a few shots and inhaling the oxygen-enriched air. 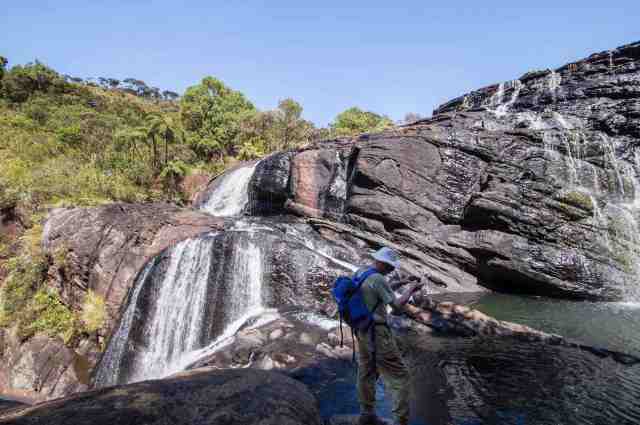 a view on the walk back from Baker’s Falls

We knew that our morning walk was done when we saw the trail marker down below. Its well-worn look gives the impression of something left behind from colonial times seventy years ago! 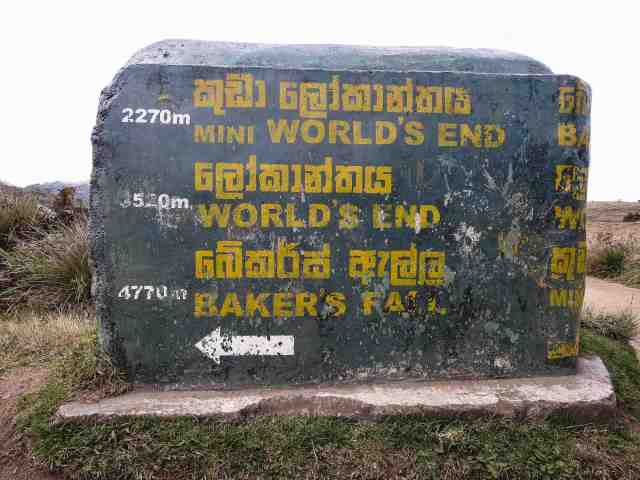 On our menu for the rest of the day – lunch at a local rice and curry restaurant and then a train ride from Ambewela to Ella, where we would spend the next couple of days hiking in the hills above the town. The train ride is perhaps the most dramatic in Sri Lanka, taking you through a cloud forest, tea plantations, and the highest-altitude trains station on the island. The next post will take a look at the scenery!

Next Post:  A Train Ride Across The Highlands of Sri Lanka (Ambewela To Ella)

This entry was posted in hiking/trekking, Sri Lanka. Bookmark the permalink.