Related Posts: Smoke Over Wabakimi – Canoeing In A Season Of Fires

The Ogoki Lodge And The Beckwith Cabins: “All Thing Must Pass”

If you really want to get away from the crowds, then Wabakimi Provincial Park in NW Ontario is an obvious choice.  For every hundred paddlers churning up the waters of Algonquin or Killarney or Quetico, there are maybe one or two in Wabakimi. But for us, there is a price to pay- and that is the time needed to get there.  I should add that we live in southern Ontario (London and Toronto)  so Armstrong Station is a long way; if you live in Wisconsin or Minnesota or Thunder Bay the park is almost on your doorstep!

Take a look at the Google map below to see where Wabakimi Provincial Park is in the bigger picture.

Our 2010 visit to Wabakimi Provincial Park very definitely gave us every reason to go back for more and that is what we did the next year.  (Check out our trip report “Discovering Wabakimi: Paddling to the Center of the Universe“ for more info.)

heading for the portage trail at dusk on the Grayson River

The Federal Government 1:50000 topos will provide you with greater detail and more context of the route to go along with the Wabakimi Project maps.  You can find the topos you need at the Federal Government’s Natural Resources Canada website and print them out yourself.  Clicking here will take you to the 052  folder where you will find all of the following 1:50,000 topos in either the J or the I sub-folders.  Each map folder contains three choices; I download the prt.tif file. Do note that a few of these maps are in black and white.

The maps below are the ones you’ll need –

The Natural Resources Canada mapping division has moved on from the above-archived maps, which have not been updated since at least the 1990s. Many go back to the 1970s.  The source of the most up-to-date maps from NRC is the Toporama site. Click here to access. It provides a seamless view of the entire Canadian landmass; you can print off what you need.  Not only are the maps more up-to-date, but they also are all in colour!

The Google Earth satellite view provides revealing views of the route and it is worth spending a bit of time getting the satellite perspective.  A web version can now be accessed within the Chrome browser.  Click here for the KML file (163 kb) of the every-ten-minutes-while-it-was-on tracks recorded by our Spot Connect during our two-week trip. Import the file into Chrome’s web-based Google Earth app as a New Project and you should see all 730 tracks. All that is missing is the first three hours’ worth – we were still learning how to use the device!

As well, the Ontario Government’s Ministry of Natural Resources and Forests has its own online map service (see here) which often provides more up-to-date and detailed maps than the Federal Government’s maps listed above.  It is worth looking at them too – and even printing out certain sections. If you go into Map Layers you can access their satellite imagery, which is often better than the one in Google Earth.

None of the above provides detailed information about rapids, portages, and campsites. For that, you will need to sources like the Friends of Wabakimi.

To get a handle on possible routes, campsites, and portages we purchased Volume 3 of the Friends of Wabakimi (formerly Wabakimi Project)  Canoe Route Maps series.

We already had Volume 1 from the previous summer’s Wabakimi trip and had found those maps quite useful.  The $40. for the Wabakimi Project maps is an investment – and not a splurge!  It will get you the campsite and portage information you need;  it will also help this volunteer organization to pay for the cost of flying in people who give a week or two of their time in the summer to clear and mark the portages, create the campsites, and do the mapping work that makes the route maps possible.

Finally, we had a Garmin GPS unit (an Etrex) along for the ride as back-up and occasional solution to those head-scratching “where-the-heck-are-we?” moments!  We also used it to record our daily track and features like potential campsites and outposts and rapids.

If you want to see the SPOT Connect waypoints of our trip click here to download the 266k file.   You’ can import the file into Google Chrome’s web version of Google Earth and see the GPS trail that the SPOT recorded.

The first few kilometers from Flindt Landing down through Heathcote Lake are missing.  We were still learning how to use the thing!  I am really glad we brought it along.  It provided the folks at home real-time info on our location and the email messaging option came in handy for sending brief okay or more personalized notes back home at the end of each day (45 characters max).  It does this by pairing up with your smartphone (I use my iPod Touch).

The Spot also provides excellent post-trip data, in particular the amount of time we spent in certain spots along the way. It records a track every ten minutes so if there is a one-kilometer distance between two successive tracks, you will know we were motoring. If you see progress in meters, it will mean some serious lining or portage is in progress!

Update: The Spot Connect was discontinued in 2017.  We ended up getting a Garmin inReach Explorer+ in 2018 because of its two-way communication feature. You can receive emails as well as daily weather updates on the inReach,  as well as do all the usual tracking and emergency contact stuff.

The Train Ride There:  A Day On The Rails!

VIA runs Canada’s passenger train service on lines it rents its presence on from Canadian National Railways (CN for short).  The train is a great way to get to Wabakimi from southern Ontario if you are okay with the following:

VIA’s The Canadian runs from Toronto to Vancouver two or three times a week. It is a 4 day 4500-km. epic train ride; the section to Wabakimi is about one-quarter of that. We left Toronto’s Union Station at 10:30 p.m. on a Saturday; we got to Flindt Landing around midnight a bit more than a day later! Given the very poor on-time performance of VIA trains since the mid-2010s, we can actually be thankful to have arrived almost on time!

the view from the outside of the train at Hornepayne 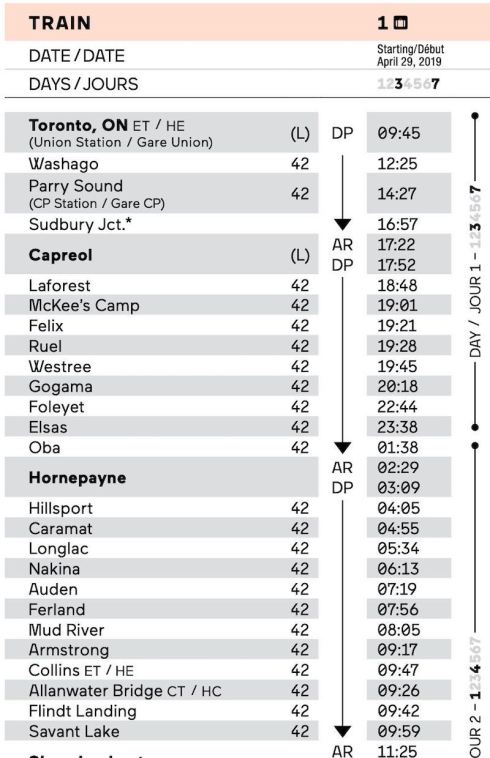 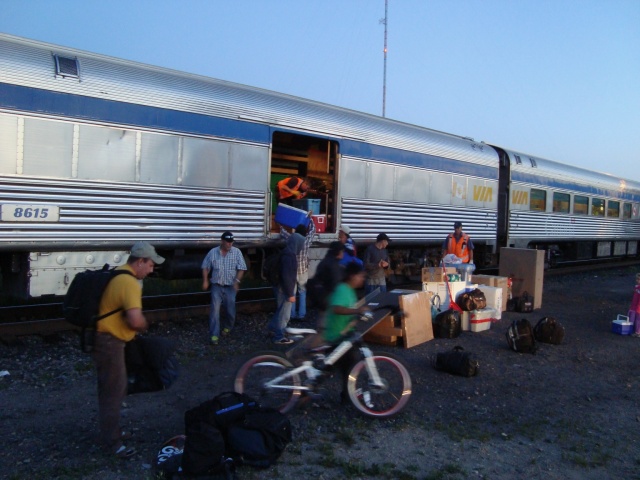 Stuff being unloaded from the baggage car at Armstrong Station- about two hours east of our exit at Flindt Landing.

Catching The Train Back To Toronto:

At the other end of the trip, the logistics were also a bit different.  Instead of ending the trip at Little Caribou Road about 6 km from Armstrong, we paddled to Collins at the north end of Collins Lake on the last morning and were at the railway tracks which pass through the non-reserve status Ojibwa settlement of perhaps 200 people by 8:30 a.m. waiting for the train’s 9:30 arrival. 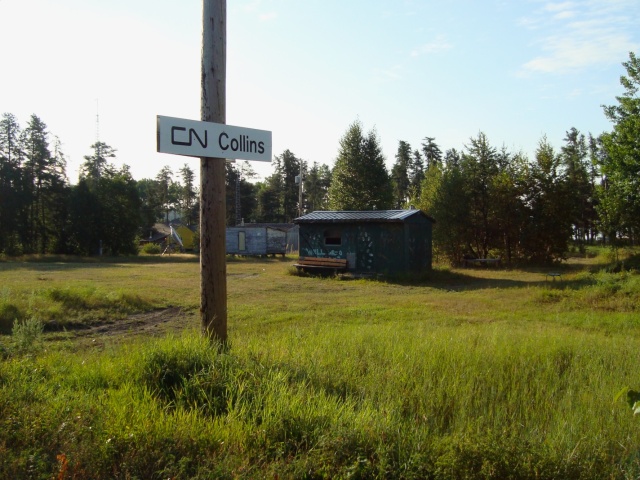 the VIA stop at Collins

the eastbound VIA- just a little bit late!

We had arranged for the eastbound VIA train to pick us up on a Monday (August 8).   [See the new schedule below!]  Everything worked out just the way it was supposed to!  Within thirty minutes of boarding, we were in the dining car having a breakfast other than oatmeal for the first time in over two weeks. We were on our way home- and a day later we would be!

Flindt Landing – VIA Stop and Lodge

We got off the train at Flindt Landing around midnight. The lodge owner was up but was not expecting us.   A confirmation call by me a day or two before would have been a good idea!  Someone cleared the cabin on the island quickly and we had our home for the night.

At $80. – or was that $100.? – it was a bit steep for the ten hours we’d be there.  However, the alternative – looking for a place to pitch our tent at midnight either near the lodge or on the other side of the lake – was worse, especially since we had no information on actual camp spots that we could use.

Note: With the revised VIA schedules you now arrive at Flindt Landing from the east in the morning (9:42) so the problem of accommodation is solved. You can paddle until you find a decent spot on Heathcote Lake. (See here for the new schedule.)

a satellite view of Flindt landing and the Lodge on the north side of the tracks. The guest cabins are on the small island and are accessed by a wooden bridge.

Next Post:  Days 1 and 2 – From Flindt Landing Down The Flint River