Wabakimi Canoe Trip: Days 11 to 15 – From Smoothrock Lake To Collins Via The Boiling Sand River

Previous Post: Days 9 and 10 – From The Mouth of the Grayson River, South To Smoothrock Lake Via Whitewater Lake and McKinley Bay 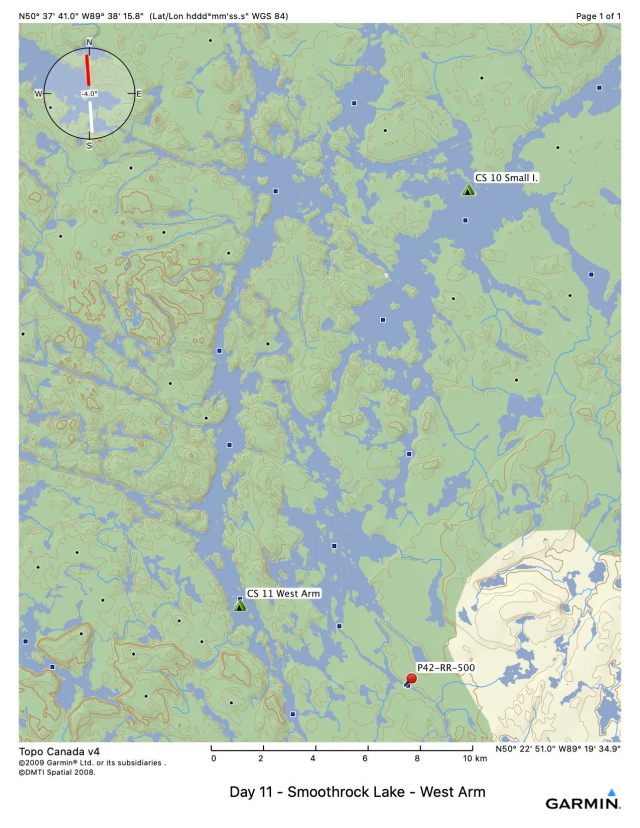 We would hear some boat traffic around wake-up time on our little island at the hub of Smoothrock Lake.  There is a fishing lodge located on the east arm of the lake about 4.5 kilometers from where we were camping:

The fly-in fish camp is made up of twelve cabins and the main lodge building and,  if the half-dozen boats in the fishing armada that passed by were any indication, is doing okay in attracting guests. The Smoothrock Lake location is one of a number owned and operated by Thunderhook Fly-Ins,  a U.S-owned fishing lodge company with a real stake in fishing/hunting camps in northwestern Ontario, including

Later that morning when we headed towards the west arm of the lake, we would paddle by the stationary boats as the guys inside tried various lure combinations.  All were from south of the border with Michigan being the #1 state they were from.  They were having a great time fishing in Wabakimi Provincial Park.  Those fishing outposts all existed before the Park was established and have been allowed to continue and – truth be told – bring in more revenue to the park and locals involved in the tourist industry than the few canoe trippers who spend time (and very little money) in the area.

We arrive complete with all our food and gear, get dropped off on the side of the railway line at Flindt Landing, paddle around the park for two weeks, and then hop on the train at Collins and head back south to Toronto. Not a lot of money there for the local tourist economy – except for the camp park permits we paid for over the telephone while chatting with the park super. 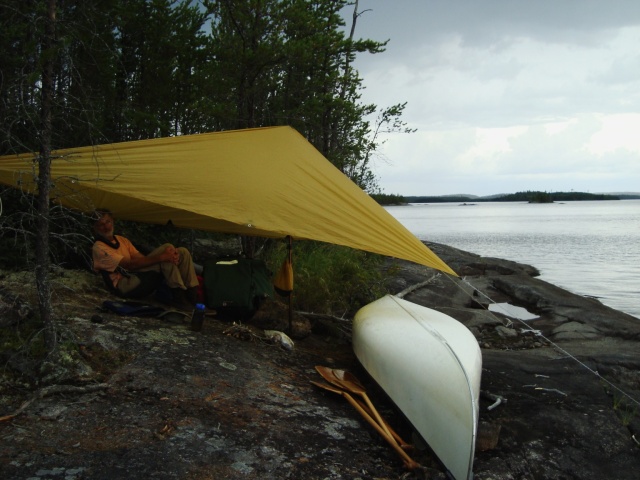 we sit out an afternoon shower at our campsite on the west arm of Smoothrock Lake.

We got close to the bottom of the West Arm of the lake and, when we passed the twenty-kilometer mark,  started looking for a campsite.  We stopped when there was a sudden change in the weather and got the tent up just in time.  We’d get a thunderstorm and some rain for a couple of hours before things cleared up again and the sun came out. 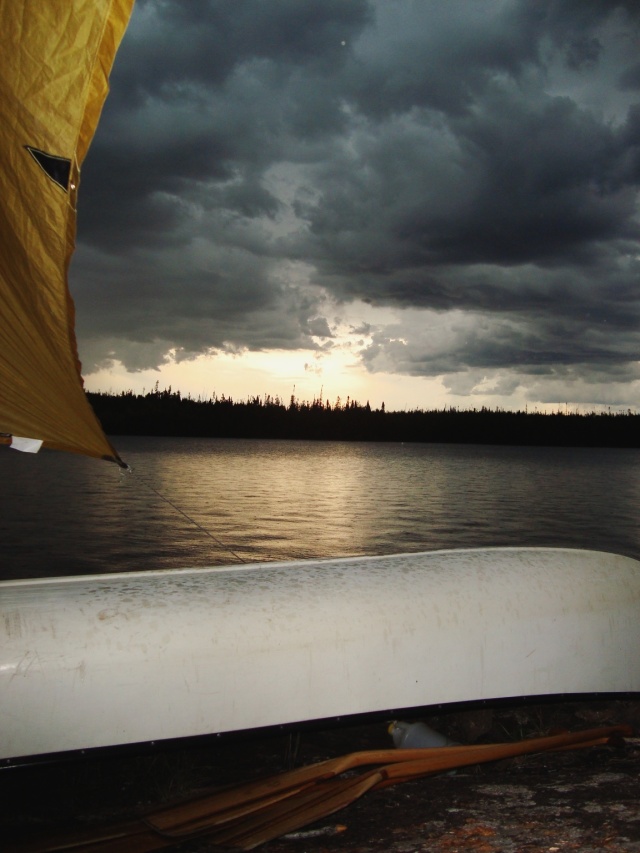 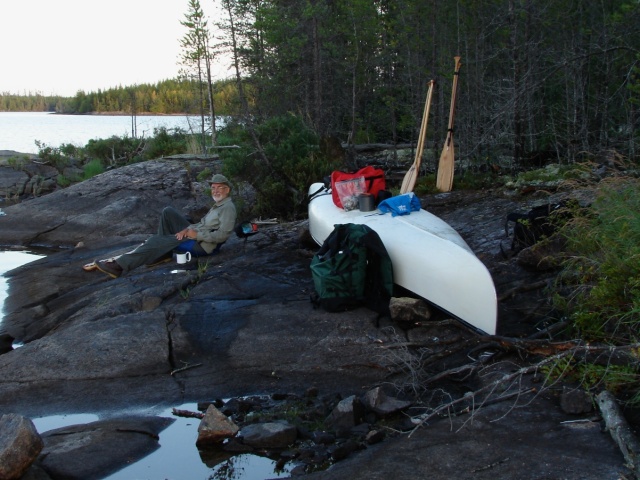 sunset on the water 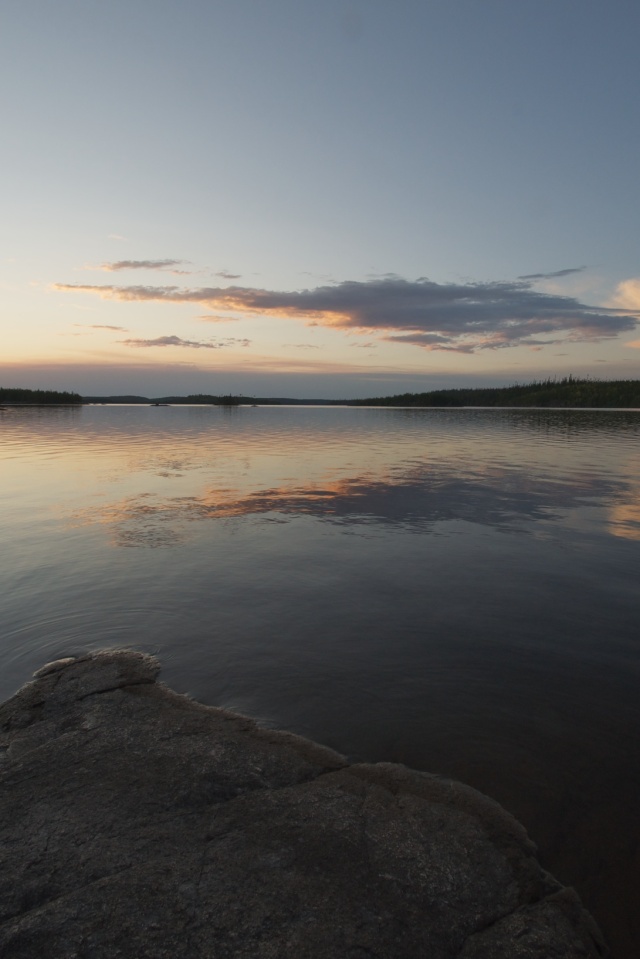 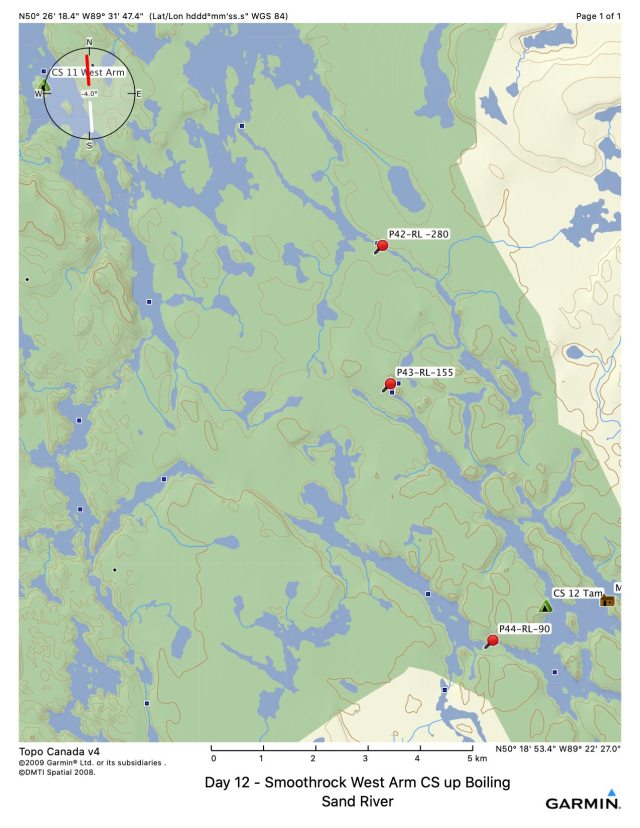 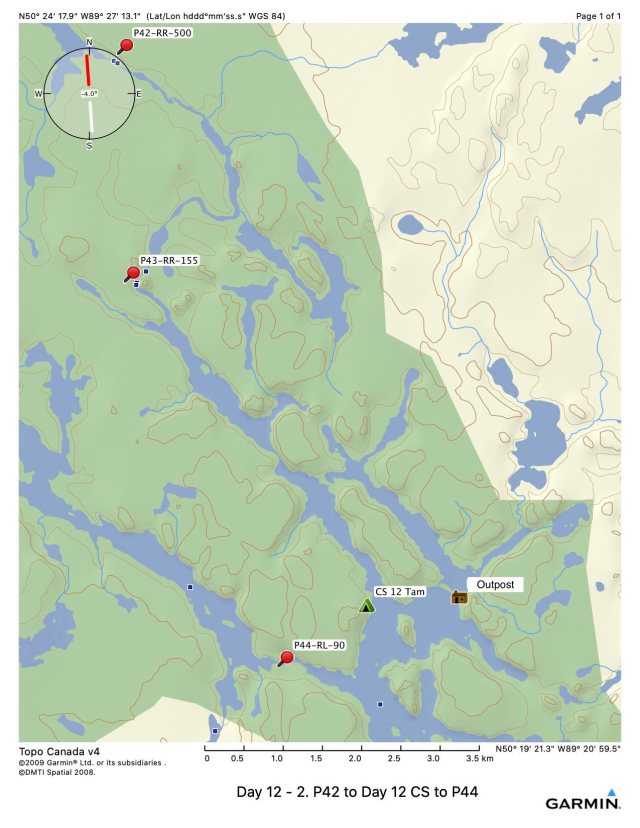 We had three days before our train ride back to Toronto from the Collins VIA stop on the morning of the 4th day. Collins was only 30 kilometers away and,  if pressed, we could have knocked it off in one day. Instead, we had to stretch it out to fill three! 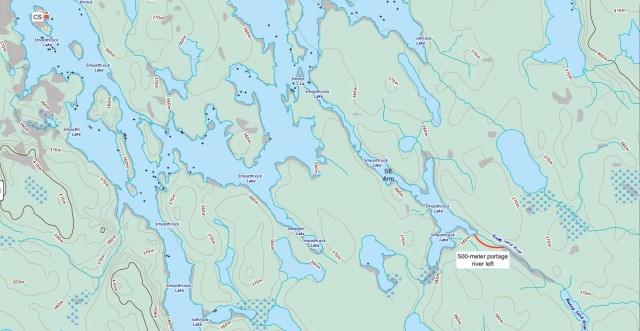 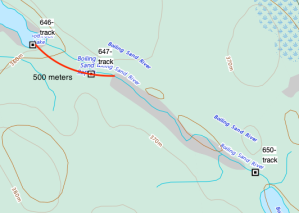 There we would have to deal with our last major potential portage (P42); some trip reports indicate a 500+ meter carry here on river left.  (See here.)

Our Spot Connect track 646 shows us at the bottom at 11:10 and close to the top ten minutes later.  Not having kept notes and unable to recall exactly what we did here, I can only conclude that we tracked the canoe upriver.  Your experience may be different.  Drop me a line on how you dealt with it.

Once beyond the constriction at its mouth,  the river widens and takes an S-shaped curve up to the next portage (P43), the one into Tamarack Lake.  We would spend about thirty minutes on the river left (our right-hand side since we were coming up) portage. The trail showed signs of some use.

After P43 we stopped for lunch on the side of the river.

lunch break on the Boiling Sand River- we had three days to do about twenty kilometers! Easy does it!

Then we paddled for a bit up Tamarack Lake  to what looked like a decent campsite.  It was only 2:00  but we decided to end the day here.  We were right across from an outpost (Mattice Lake Outfitters?). We were also 11 kilometers from Collins Via train stop.

fresh coffee being made at our Tamarack lake campsite 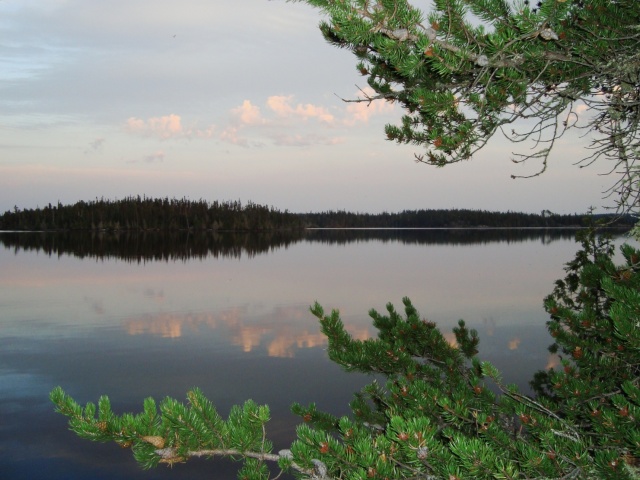 Our tickets for that VIA train ride back to Toronto’ Unions Station had a fixed date.  We now had two days to kill at the top of the Boiling Sand River.  Not being fishing aficionados, we contented ourselves with taking photos, drinking coffee,  and picking blueberries, lots and lots of blueberries! 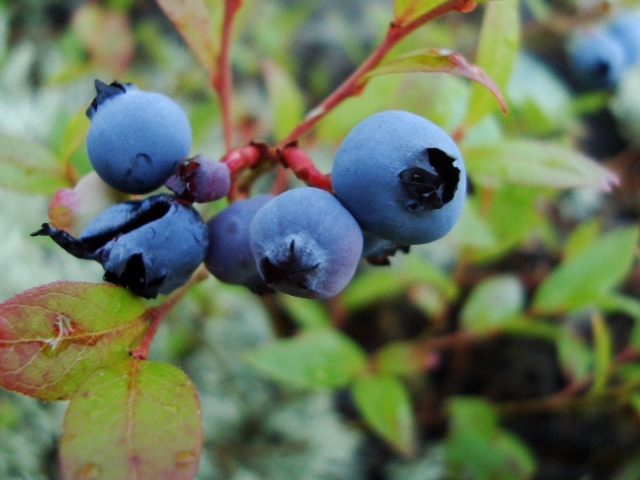 With blueberries all around and lots of time to kill, we start picking- and eating.

In our youth in the Abitibi, in the summer we’d go into the bush surrounding the mining town we grew up in and pick blueberries – and then knock on doors with our four-quart baskets hoping to make a sale that would get us Spiderman comics and creamsicles.  25¢ for a basket!!

However, on days 13 and 14, there were no potential takers – other than the bears we did not want to tempt to our campsite – for the ridiculous amount of blueberries we picked! Still, it was a soothing thing to do – Zen and The Art of Picking Berries! – and brought back memories!

From Tamarack Lake to Collins Lake, there are four short portages.

teepee poles on the side of a portage trail

morning on the Boiling Sand River 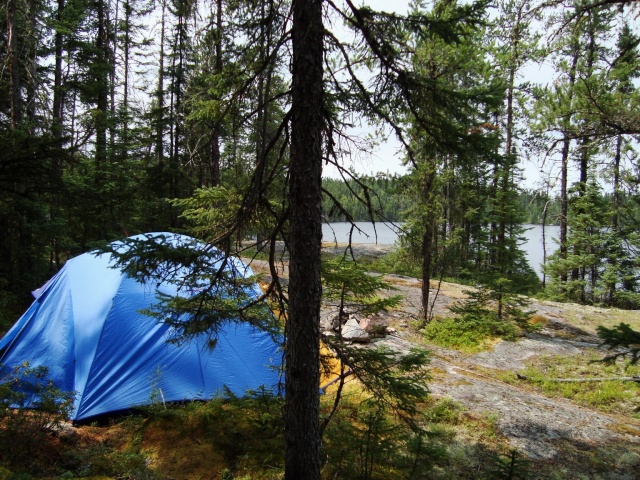 the bit of food we had left was up in the tree and down in the bay were the eight quarts of blueberries. We wanted to keep them cool- we just managed to get them wet!

sunset on the second last night 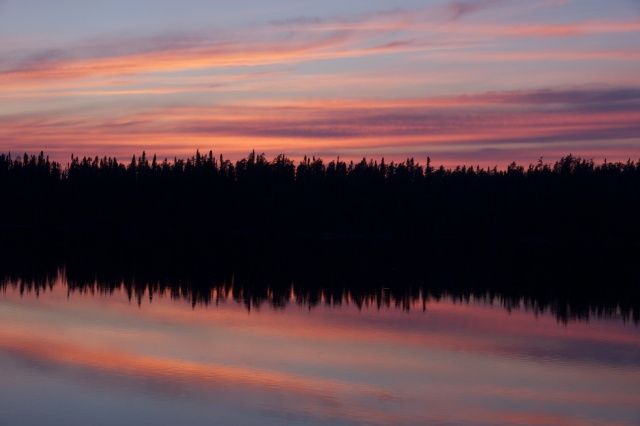 failed attempt at drying out 15 liters of blueberries- we would later dump them all into Bath Lake! It was a painful experience! 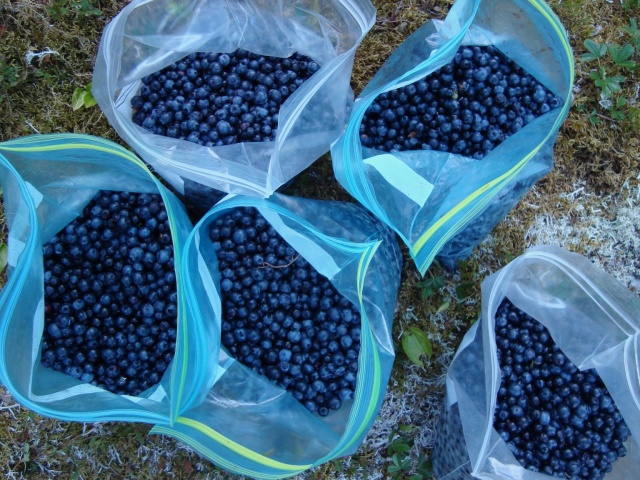 our handiwork on display- all for naught

We got up a little early this day just to make sure we’d be at the Collins VIA stop on time. I  really should have found out how to indicate where we wanted to be picked up at the side of the tracks on the portage from Bath Lake. However, the VIA rep in Montreal that I spoke to did not have a clue and, unfortunately, neither did I! I just let the matter drop.

Here is the information I should have had – that is, the mileage marker for Bath Lake –

Wabakimi VIA Mileage Markers for Canoe Insertion/Extraction [See here for the source of the above information and more background.]

19.3 is the point where the portage trail crosses from Bath Lake over the CN tracks to Collins Lake. The Friend of Wabakimi website has this to say about mileage markers –

So – not having the mileage marker and not wanting to risk standing on the side of the tracks and having the train blow past as we tried to flag it down, we portaged into Collins Lake and up to the small settlement on the north side of the lake. It took about an hour – it was no big deal and we got to see Collins! 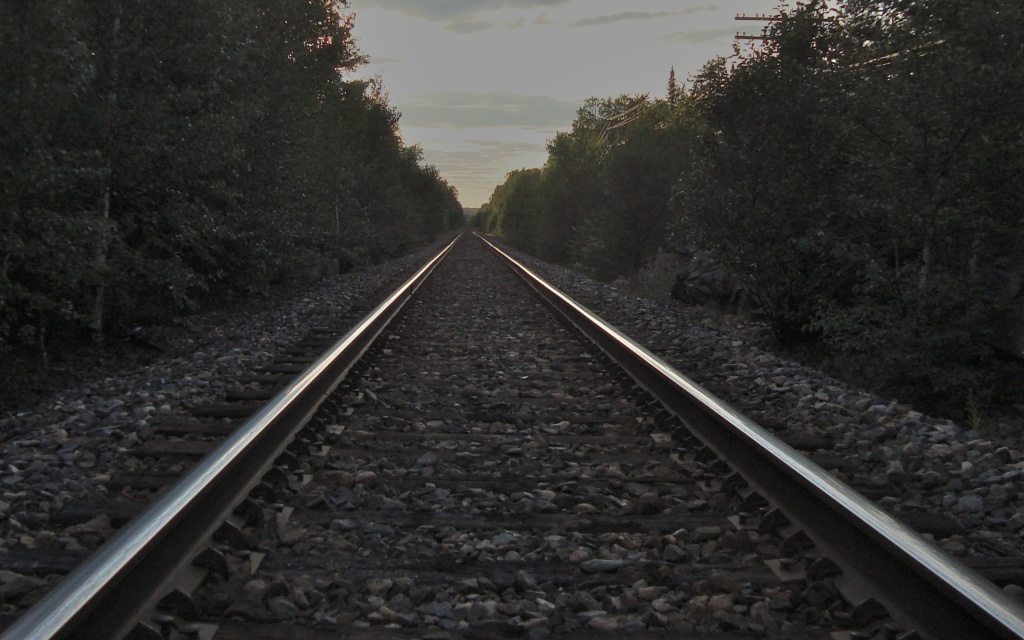 the rail line runs past Bath Lake from Collins- we would portage over it the next morning. We should have just arranged to meet the train at the portage point instead of paddling to Collins!

Collins [a community without official Band Status but with the name Namaygoosisagagun First Nation]  is a railside Anishinaabe community of perhaps forty people that would have shifted from being a summertime settlement to a permanent one after the railway line came through in the 1880s.

[See here for the Collins community’s web page. It does include the statement that “Namaygoosisagagun has been in existence since time immemorial “.]  Band Status would presumably give the community leaders access to government funds and powers that their current non-status does not.

The community is made of up families who are registered to one of the following Treaties – Treaty #3, the Robison-Superior Treaty, and Treaty #9.  Those families living on the north shore of Collins Lake itself at that time would have been included in the Robinson-Superior Treaty of 1850 since Collins Lake is a part of the Superior drainage basin. Its outlet at the south end of the lake – the Collins River – drains into the Kopka River system which ends up in Lake Nipigon.  Any Indigenous families living a few kilometers northeast on the Boiling Sand River or Smoothrock Lake would have been registered to Treaty No. 9 (signed in 1905) since they were in the James Bay drainage basin.

On the beach where we landed, were three unoccupied tourist/visitors’ cabins. A local came down the road on his ATV while we were carrying our gear from the beach up towards the VIA waiting room – perhaps the most dilapidated building in the entire community, it looked like local youth had taken it over and turned it into a clubhouse!  See the images below. It was also one of those closest to the tracks and most likely to be seen by those VIA passengers staring out of their windows.

the waiting room at the Collins unofficial I.R. VIA rail stop

We waited for the eastbound VIA train for an hour or so and, once we got the canoe and the gear into the baggage car, hopped on board and headed for the dining car and our first non-oatmeal breakfast in two weeks!  A day later – just a couple of hours late – we would be rolling down the Don Valley and into Toronto’s Union Station.

the eastbound VIA- just a little bit late!

the breakfast table in the VIA dining car – plush!

If you have any questions about the logistics of the trip, suggestions on how to make the post more useful or corrections we need to make, or general comments on what you’ve read,  please drop me a line at true_north @mac.com

Days 3 and 4 – The Flindt and Ogoki Rivers

Days 5 and 6 – The Ogoki, the Palisade, and the Grayson Rivers

Days 7 and 8 – The Grayson River and Whitewater Lake

The Ogoki Lodge and The Beckwith Cabins: “All Things Must Pass”

This Post: Days 11 to 15 – From Smoothrock Lake To Collins Via the Boiling Sand River