Wabakimi Canoe Trip- From Flindt Landing: Days 3 and 4 – The Flindt and Ogoki Rivers

Previous Post: Days 1 and 2 – From Flindt Landing Down the Flindt River

This day was one of those when we decided to put in some kilometers on the water before having breakfast.  We set off at 8:00, dealing immediately with the two sets of rapids just below the campsite.  We ended up lining the canoe through both; the water was not quite high enough to be able to run.  We stopped about 45 minutes later on a small island and took out the breakfast bag and spent an hour enjoying our coffee in the morning sun.

On the map below, our campsite is in the center of the page; the red pins show that there were a few sets of rapids to deal with before we got to Tew Lake and Wabakimi Lake. 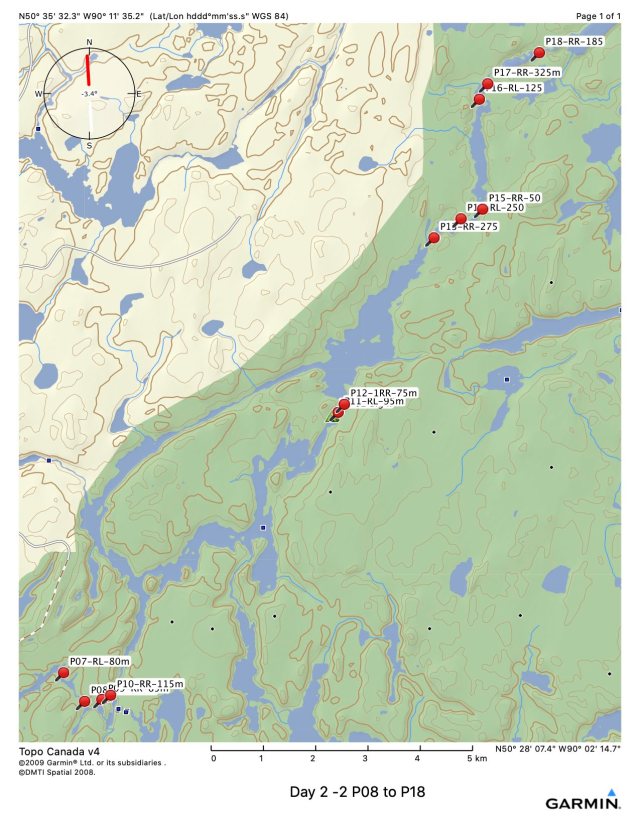 After our island breakfast stop, we headed on to the next series – P13,P14, and P15. We ran and lined P13, lined P14 on the left side of the island, and then lined/ran P15. In all, we spent about an hour dealing with all three.  There was more to come! 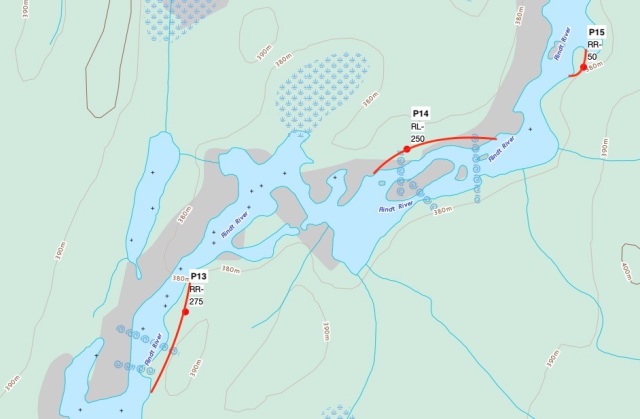 It would take us an hour and a quarter to deal with the next three sets of rapids.  We portaged P16 – no fuss there!  Then we lined & ran through P17 on river right.  After taking a quick look, we also floated past P18.  We were now in Tew Lake, a part of the Ogoki River System. Bye, bye, Flindt!. About a half-hour later we pulled ashore on river right. It was almost 2:00 and definitely time for lunch!

Lunch over, we headed for the east end of Tew Lake.  Our maps showed one last bit of work for the day.  The three red pins on the overview map below set the stage! 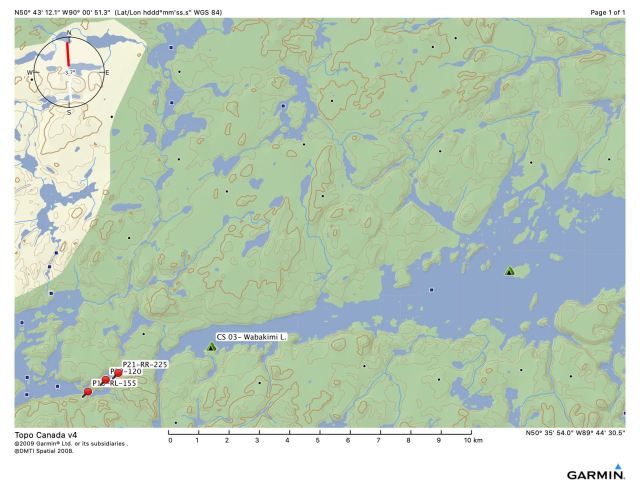 One thing that happens as you spend more time on the river is that all the basic routines become more and more efficient and everybody knows exactly what it is that they should be doing. Our portage routine was coming along nicely, thanks to the Flindt.  We would knock off the next three carries – the first two were admittedly fairly short – in a bit more than an hour.

We were now in Wabakimi Lake, the lake at the center of Wabakimi Provincial Park. (See the map for Day 4 below.) It is 16 kilometers long from west to east but the west half is fairly narrow; it does widen out on the eastern half. We found a decent campsite on a point on the south shore not too far from where we had come into the lake. Up went the tent and the tarp; Day 3 was in the books!

our Day Three campsite on the south side of Wabakimi Lake – see map above for exact location!

dusk view of a small bay from our campsite

Lake Wabakimi on a windy day can be a bit of struggle – and that is what we had a bit of on this day.  We started off at 8:00, hoping to benefit from the calmer conditions one finds earlier in the morning. Easy paddling east down the narrow section of the lake with a light SE wind that picked up as the day progressed.

By 9:00 we were on the north side of the lake and heading for the string of islands off the northern shore, making use of them as windscreens as we made our way east. 11:15 found us at the east end of those islands and heading into some choppy water towards River Bay and the outpost. 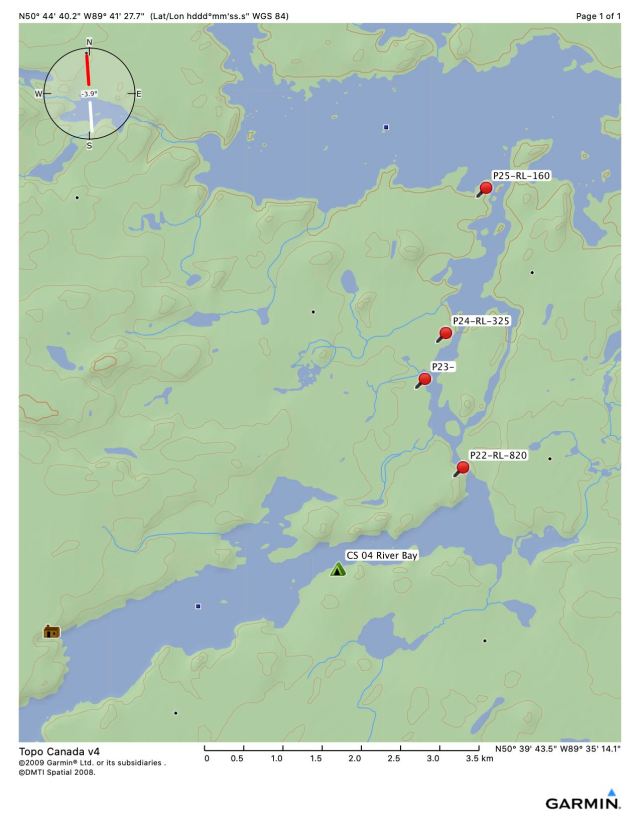 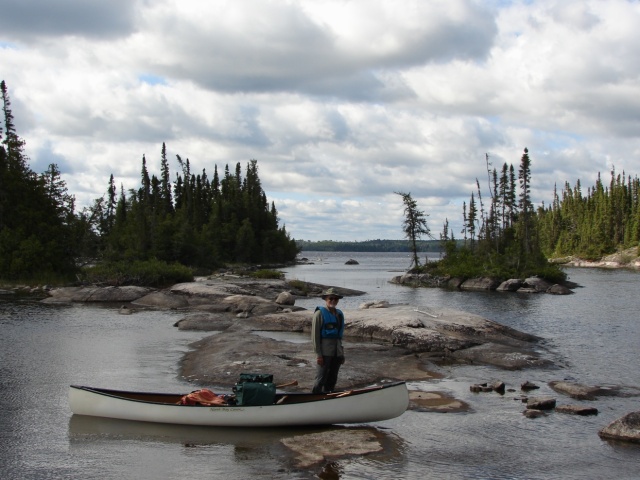 break time on the north shore of Wabakimi lake as we paddled through the maze of islands, using them as windscreens! 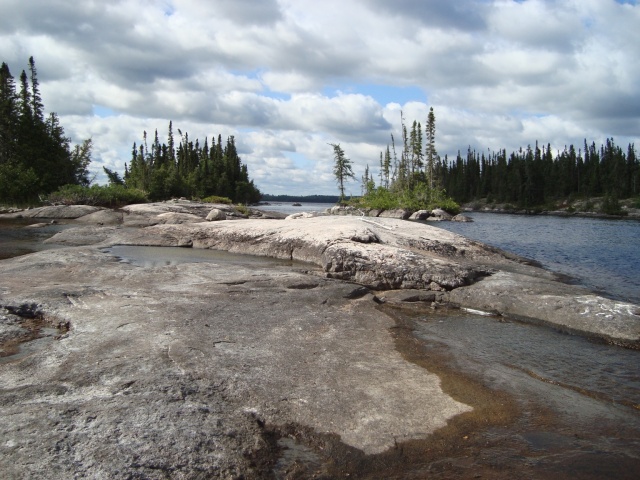 a very scenic stretch of Wabakimi Lake on the north shore

We did paddle up to the outpost to get the shot you see below; there was nobody home.  We had hoped to get some news on the wildfire situation that had started about ten days before. After some deliberation and the advice of the park superintendent and other paddlers, we had decided to go ahead with the trip.  So far we had not smelled any smoke or even thought of the fire that much. That would be changing in the next day! 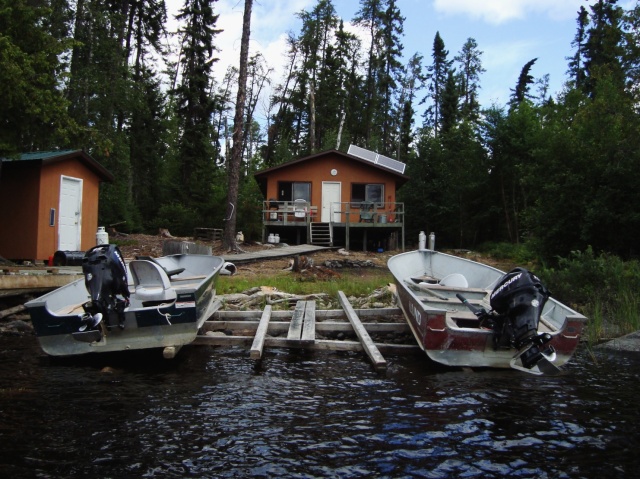 a fishing lodge at the east end of Wabakimi Lake just as you enter Ogoki River Bay- nobody home!

Shortly after we paddled back out into the bay, we spotted a Wabakimi Parks bush plane. It landed in front of us and we paddled over.  The ranger was checking fishing permits!  He asked us for our camping permit.  As luck would have it, it was tucked deep inside our one super-waterproof bag – the one with our sleeping bags and other need-to-keep-100%-dry stuff.  Digging it out of the bag while bobbing on the choppy water of River Bay was not going to happen. So – I gave the guy our names and addresses and told him to check with the park super since I had gotten and paid for the permits from him over the telephone.

We also asked him about the fire situation.  He said the fire, labelled Thunder Bay 50,  was currently  around the Burntrock Lake area, about 20 kilometers from River Bay.)

He made two route suggestions:

As our map for Day 4 shows, we kept on going to the east end of River Bay before stopping for the day and putting up our MEC Wanderer 4 tent.  Still not decided was what to do the next day.  The original plan had been to paddle into Burntrock Lake and spend a couple of nights there before turning back to Slim Lake and Grayson Lake.  The developing fire had obviously changed things!

We were struck by the amount of deadwood and blowdown behind our tent site on the south side of River Bay.  It had not yet occurred to us that the parks people might be happy with a burn in the area! 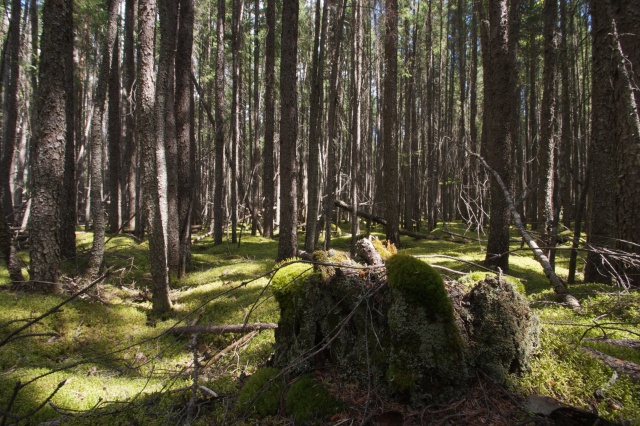 the bush behind our tent – lots of deadwood ripe for burning

It is almost 9 p.m. as we gaze westward towards the soon-to-be setting sun.

Next Post: Days 5 and 6 – Up The Palisade River and Down The Grayson