Dashing through The Snow- Viggo Has a Winter Blast!

Viggo on our street after the snowstorm

Click on the image to enlarge and open in a new window!

Usually, the U.S. wintertime weather forecast sounds like this: “A cold front from Canada is expected to dump five inches of snow on parts of the mid-west overnight, with Nebraska especially hard-hit.”  Well, last night up here in the Great White North we got covered by 15 centimeters of snow from- of all places- the American mid-west.  It was Toronto’s first major snowstorm of the winter.

On our morning walk Viggo, of course, was lovin’ it.  It didn’t hurt that everybody else was out too so there was a lot of sniffing and doggie greeting going on.  Here is the new boy on the street, Rapscallion (a “rescue” formerly known as Chico) –

He wasn’t the only one out there. His sidekick, a Basset Hound by the name of  Mr. President,  and Teresa’s eleven-year-old dog Benny, the senior “statesdog” of the street, popped into the picture with Benny having stuff to say-

Rapscallion, Mr. President, and Benny eyeing each other

Mr. President wasn’t listening; he made a straight path through the other two dogs, heading right for me and the treat he figured he might get. 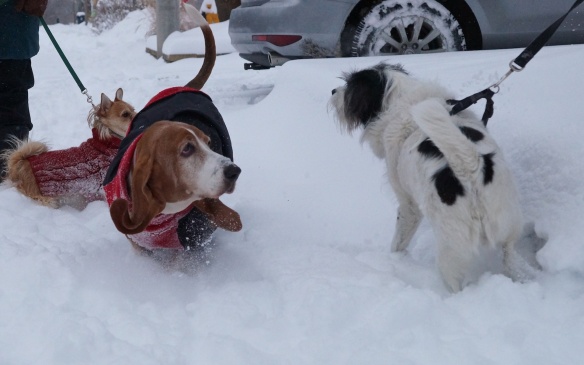 I am usually good for a nice slice of Rollover or some other decadent treat that his owner doesn’t mind me slipping his way.  Mr. President doesn’t mind either!

Incoming missile!  Mr. President honing in on the hand which does not have a camera in it!

Eventually, we made it to the top of our street and crossed Broadview over to the park area.  One problem with winter snow is that the salt trucks are out, dumping their contents all over most of the streets and sidewalks.  Something that dog owners factor in when they plan their neighbourhood walks is this- “Where is there the least amount of salt?”   Luckily, once we are in the park it is no longer an issue. 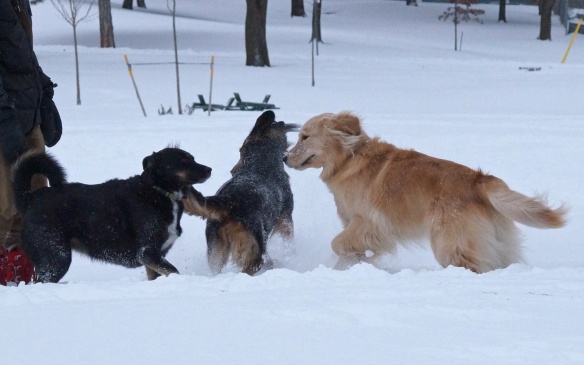 dogs in the park enjoying the snow

We bump into Clarence, a buddy of Viggo’s since puppy days,  and they do a bit of running around-

There are dogs cavorting all over the place- even though it is not really an off-leash area. One of the benefits of snow is that it reduces to almost zero the number of joggers and cyclists.  This means there is less chance of Viggo chasing – though he prefers that we use the term herding– moving objects.  Unfortunately, snow brings toboggans and moving toboggans are chase-able to an Icelandic sheepdog, at least to this poorly trained one!  But on this hill, the toboggans have yet to arrive so I can relax…

one of the prime toboggan hills in Toronto! still empty this morning as we pass by

We walk part way over the Riverdale footbridge and I can see that we will not be going to the other side – the kids are already there, sliding down the other great hill.

While Clarence and his owner Mike go over to the other side, Viggo and I head down for our favourite walk in the Don River Valley. There is a trail that runs along the river that makes for a great walk on days like this because I know nobody – well, almost nobody!- will be there.

Viggo dashing through the snow- 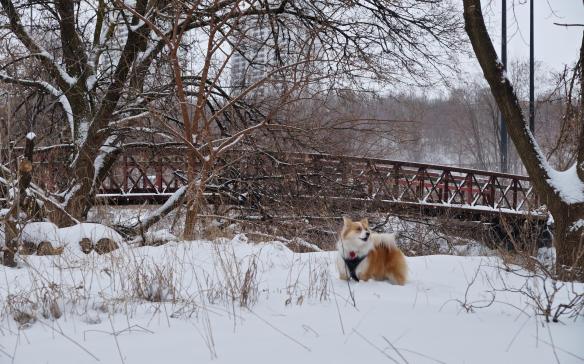 down in the Don River valley on a snowy morning

Viggo plowing through the snow near the water’s edge 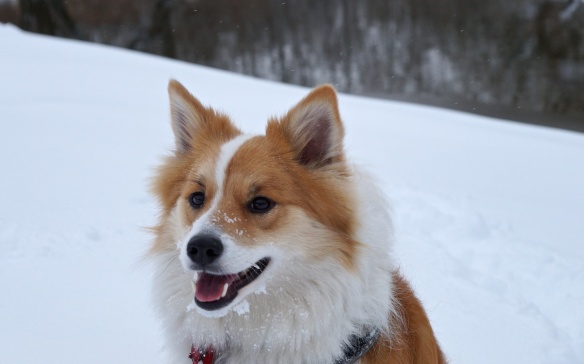 Viggo in the snow

Viggo on the banks of the river

We live in the middle of an urban conglomeration of four million people and I appreciate that I can come down here- or down to the shores of Lake Ontario- and walk my dog and at least frame my pictures in such a way that for a while there is no city, just bush and river and a trail through the snow with my dog Viggo running back to me.

We walked up the valley for a bit and then turned around and headed back for the bridge and home.  The unexpected cross-country skier and the snowshoe-er were both very gracious when I apologized for Viggo’s yapping and chasing; they said they had a dog too and knew what it was like.

A few minutes later he would leave me for the water’s edge and then run maybe one hundred meters (same as yards to our American readers!) up the river chasing a couple of ducks whose quiet morning had definitely been shattered by this agitated intruder.  Here he is coming back, quite pleased with the job he’s done and fully expecting a reward for services rendered. 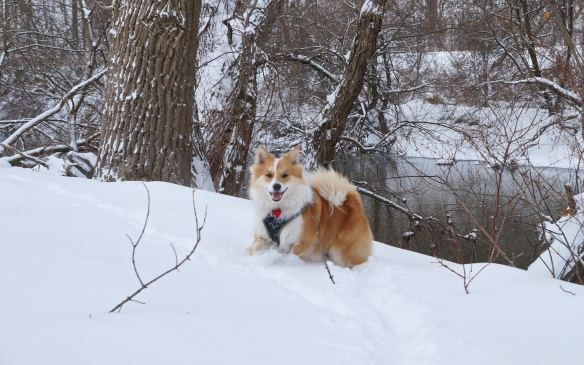 Viggo returns after a futile attempt at herding ducks

And then back to the Riverdale footbridge;  that is it in the picture below. Visible behind it are the bridges at Gerrard Street, Dundas Street, and barely visible the Queen Street Bridge.  No pretending we’re not in a city now!

While we’d been down in the valley I’d been thinking about the likelihood of Amy having been down there earlier with her two dogs. In fact, I was going to have Laila facebook a message to thank her for the footsteps she left for us to follow. Well, up the steps of the green bridge we climbed and who should we meet?

Mersey and a hidden Fender and Viggo

We walked over the bridge together and Amy headed one way while Veegs and I angled another. Like me, Amy was making an effort to avoid the salt; the Parks guys had amazingly already salted the park road down to the bridge from the main street up above so she was headed cross-country.

Fender and Mersey in the snow- heading up to Broadview Ave. up above 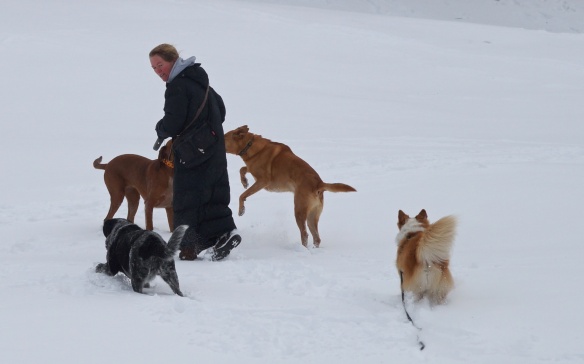 Amy and the dogs- Fender in play bow mode, Mersey, Clarence, and Viggo with his leash!

One last “scrunch”  for Viggo and our walk was almost done.

it’s a dog’s life – playing in the snow and being fussed over!

It was now more than an hour later than when we had first come down the hill;  the toboggans were definitely out and the kids were having a great time. I held on to the leash for the rest of our walk as we passed them by. A CBC crew was just putting its video equipment away as we got to the top. What else but a feel-good news item on the action on the hill the morning after a major snowfall!

Riverdale hill with the kids sliding down

We stood and watched as a boy came down the hill where the slope is a more gentle grade and the speeds reached are not quite as fast as on the main section.  He was under the watchful eye of his dad, who may have also been wondering about Clarence and Viggo, both of whom were barking as things flashed by.

And so ended another morning walk.  It is a bit later as I finish typing this I and see that the sun is out and shining – unlike this morning’s grey.   Time for a walk in the neighbourhood – Viggo is ready to go! 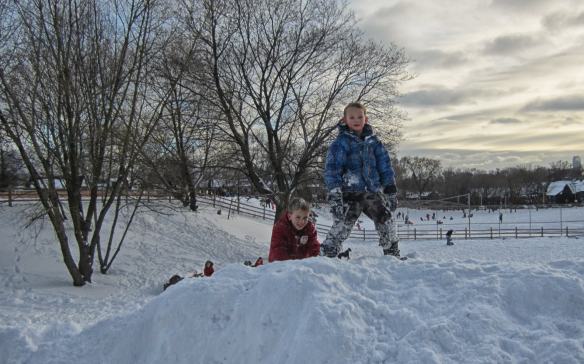 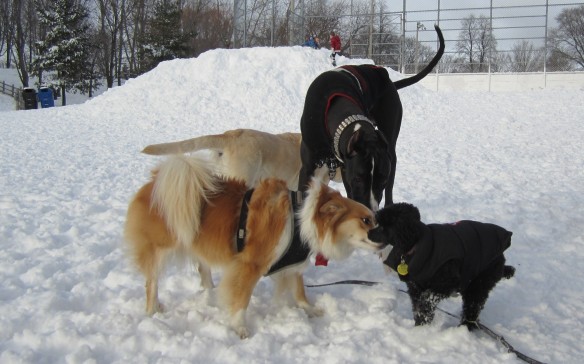 Later The Same Week- After Yet More Snow! 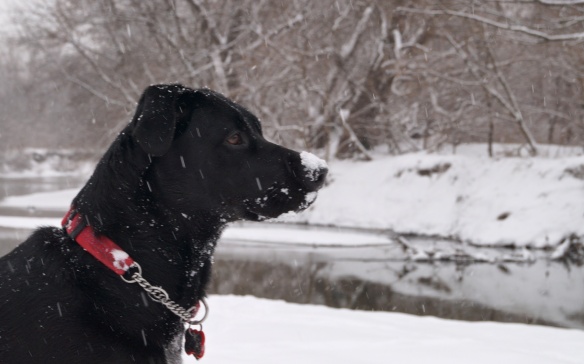 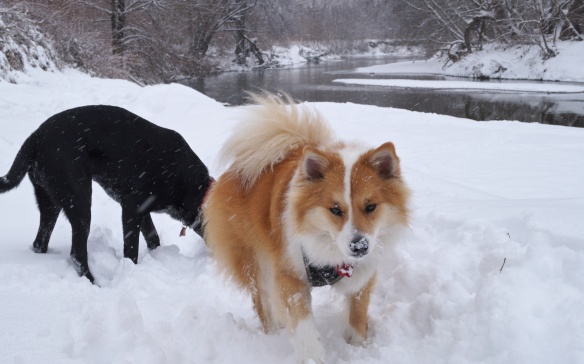 Tilda and Viggo on the banks of the Don River

Kuvi (a Samoyed)  and Viggo romping through the bush 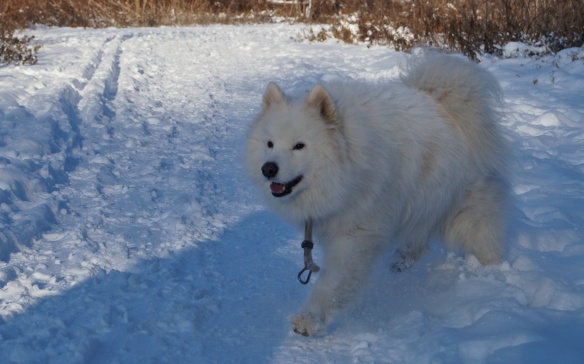 Viggo snout to snout with a Tibetan Mastiff

family fun time on the slopes of Withrow Park

a young slider contemplates her next run down Withrow Park Hill

This entry was posted in Ramblin' With Viggo. Bookmark the permalink.

9 Responses to Dashing through The Snow- Viggo Has a Winter Blast!