Viggo and the Swans on Christmas Morn

Viggo and the swans- a chance encounter makes for something special

All images enlarge in a new window with a click!

The Christmas Eve snowfall was so light that a bicycle ride down to Cherry Street beach was still on for Christmas Day morning.  The one section I was extra careful on was the hill going down to the Riverdale Foot Bridge from Broadview Avenue. I haven’t forgotten wiping out there one day last winter.  It had taken days for my body to feel normal again!  We walked down this time!

It was about 10 a.m., and the sun was nowhere to be seen.  After locking up the bike at the dog park entrance, I opened the gate to doggie heaven and in went Viggo.  Here is the first of many dogs he played with- this one a chow chow/border collie mix:

We did our customary walk to the western point of the dog park- the point where you can look over the narrow Eastern Gap to Ward’s island. On the way, we walked through this stand of trees from the gateway area I am looking back at in this picture-

the stand of trees at Cherry Street beach

The park is located about three kilometers to the southeast of the downtown area.  This is what downtown looks like from the park-

Finally, we got the point in the park the furthest from the gate- 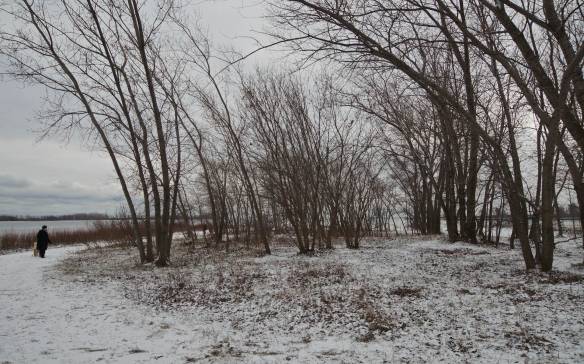 the western point of the park

And then it was to the water.  I’ll admit that this morning I did not toss the ball into the water as often as usual-and definitely not as deep.  (I have no doubt he would have been very happy to do some swimming in that icy cold water for that red ball of ours.) We were not the only ones on the water.  Viggo had the red ball- but he had some ducks to monitor too.

Viggo checking out the ducks

After this diversion, it was back to work – getting that ball back to me so that I’d toss another delicious morsel of Roll-Over into the air for him to catch in his open mouth.

Viggo is back on track- and bringing the ball back to his treat dispensing machine!

Every time he comes out of the water he does this shaking routine – first the front and then, as in this picture, the rear gets a supersonic shake-down and the droplets of water fly.

Viggo’s rear in shake-down mode- it is a blur!

The beach area was quiet – no other dogs swimming or fetching balls from the water. But when we met the swans, Viggo had a job to do.  This video shows his fascination – and my panic –  as the swan got closer and closer to our precious! In my mind was Laila’s reminder about how vicious swans could be. Who knew! I did not want to see the damage.

We walked away from the beach and into the wooded area where the other dogs were playing and joined in on the action.  Eventually, we returned to the beach and walked into the swans again –

Charming, eh!  Over a minute of an Icelandic sheepdog barking the world into order. Funny how you get the biggest thrill from the smallest thing – in this case, an encounter with a couple of swans!  Viggo barked some more, and then it was time to go, time to do our bike ride/run back up the valley. I also got to think about how bad the videos might be – after a lifetime of framing still photos, this video thing needs some work!

Viggo looking somewhat reluctant to leave a job undone – no swan song yet! 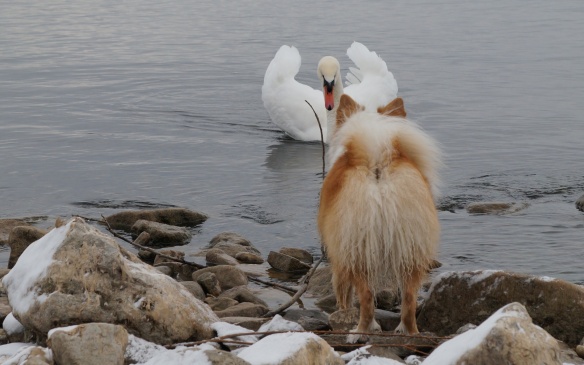 Viggo makes one last stand with a just-as-determined swan

And then- whew! close call-  he came back when I called him and we were off- past the pier with the cityscape behind it and all the way back to the bike.

Within 35 minutes, we made our way back to Riverdale where Laila was doing the preliminaries for the vegan Christmas feast we’d be having later that day. 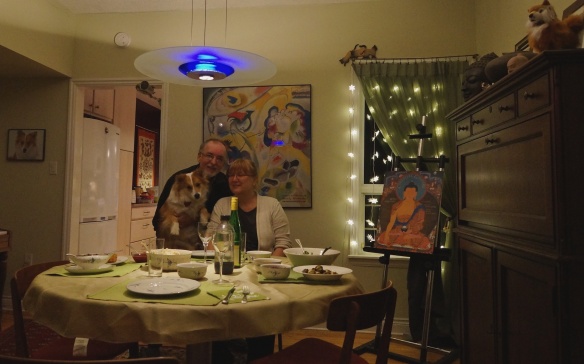 all here for dinner- except for the cats!   Spot the icie(s)!

If you’d like to know more about our charming little hooligan, then click on the following – The Adventures of Viggo in Roverdale.  It will get you right up to speed in a flash! 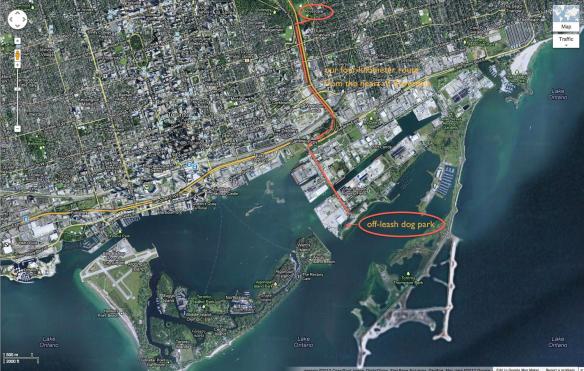 This entry was posted in Ramblin' With Viggo and tagged Cherry Beach dog park, Viggo and swans on Lake ontario shore, Viggo at Cherry Street Beach, Viggo the Icelandic sheepdog. Bookmark the permalink.