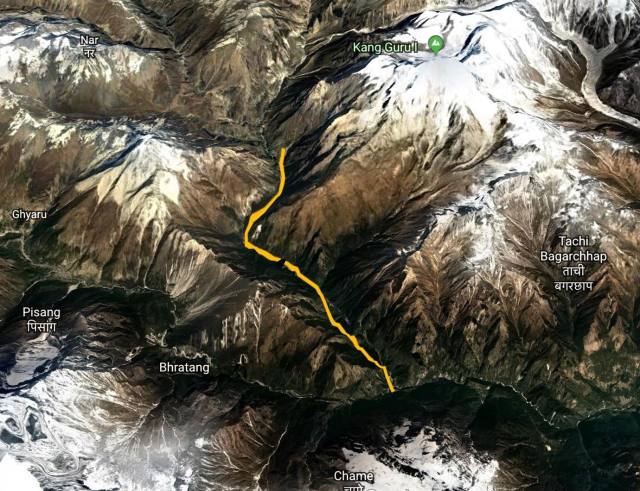 6:15 a.m. – our Meta campsite on the front lawn of one of three or four guesthouses in the village

6:20 a.m. – our tent crew dismantling the tents while we have breakfast at Meta

Just above and to the south of our guesthouse (it may have been the Terelha Guesthouse and Restaurant) was what looked like a newly constructed Hotel Marpa International. 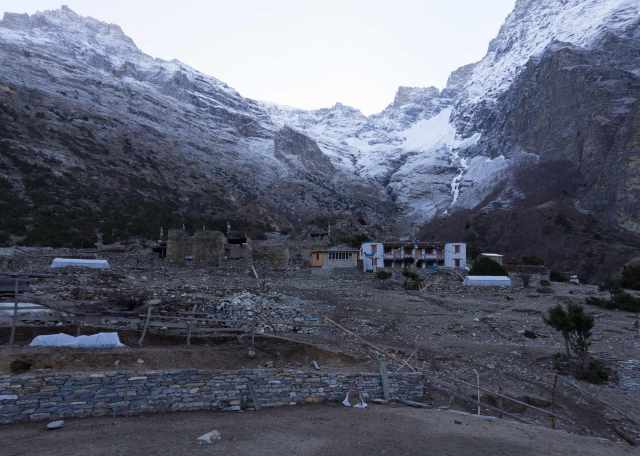 Steps leading down from our guesthouse to a lower level and, at least his morning, a group of donkeys waiting for their day to begin. 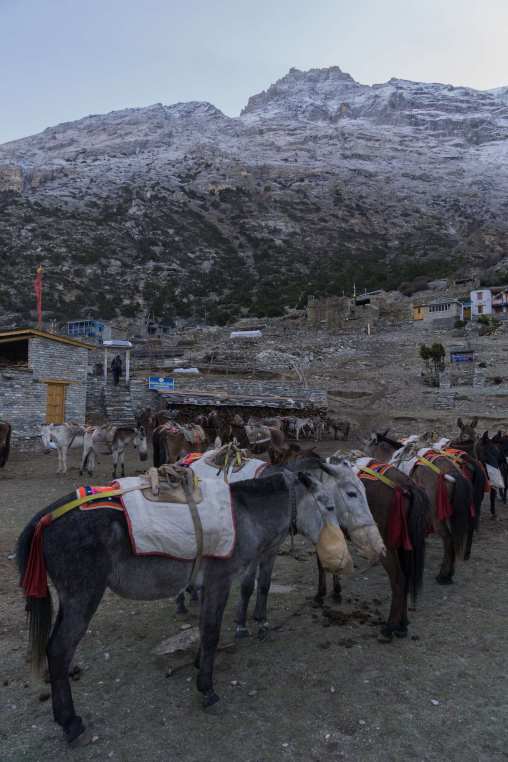 620 a.m. – Meta donkeys waiting for another Naar/Phu workday to begin

And then it was off – Koto on the Annapurna Circuit was the day’s destination and it felt like the end point of our trek even if the official end was Besi Sahar. This day we would meet seven trekkers coming up from Koto, more than we had met in the nine days from Tsarang.

Also noteworthy was the number of bridges we crossed as the trail bounced from one side of the Naar Khola to the other. 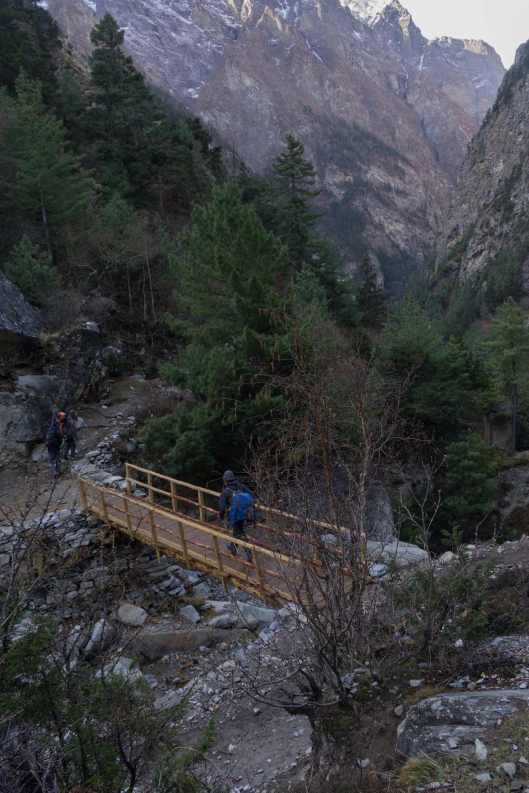 About an hour into our walk we passed by Singenge Dharmasala. If you’re coming from Koto it is a possible tent site before moving up that last 1 1/2 hours to Meta; the porters’ shelter, the outhouse, and the litter at the site show that some have. I guess it would all depend on how tired you were when you got there. It certainly has none of the views and facilities that Meta has! There is that steel bridge just south of  the site and five minutes further down a waterfall that the trail passes under.  It would make for a brisk shower! (Not the place to lose your footing!)

Dharmasala – a possible stop on the way to Meta from Koto 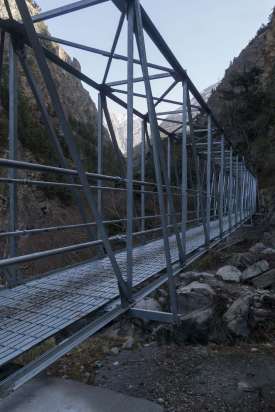 the 2nd bridge down from Meta 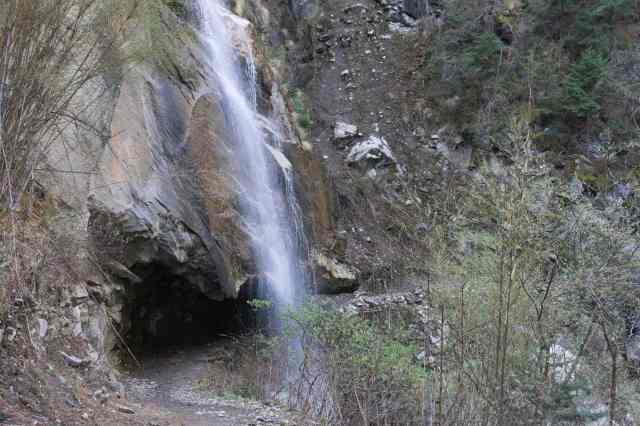 waterfall over Koto-Meta trail near Dharmasala

looking south from the Koto-Meta trail

bridge #5 S of Meta on the trail to Koto

Just a bit south of our tea stop was a more substantial teahouse – the 3 Sister Restaurant and Lodge. For those coming off the Annapurna trail from Koto (2600) and making the ascent up to Meta (3560), it might be a good intermediate stop instead of trying to do Koto-Meta in one long hard day.  By now the pine forest and the lush vegetation has really taken over from the barren alpine look! 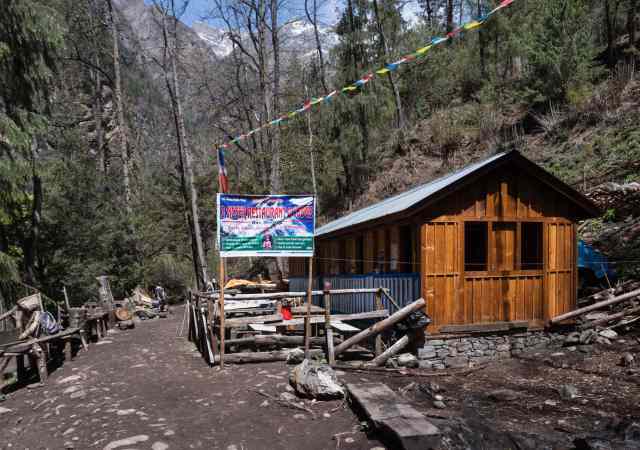 3 Sisters Restaurant and Lodge – about 2 km. north of the Soti Khola campsite

We pass another new teahouse/lodge soon after.  The trail runs through a pine forest and it is actual soil underneath! On a stretch of collapsed hillside we see a crew of ten young men in “break” mode from their task of rebuilding the trail.  They seem to have minimal equipment; most are wearing flip-flops and wool caps.

A bit further down the trail, we step aside for a few moments as another donkey train makes its way up to Meta and points beyond.  The animals do not seem over-loaded and look to be well-treated.

At 11:00 or so we are approaching the confluence of the Soti Khola and Naar Khola. On the north side of the junction is what looks to be a well-used campsite, given the litter dump on the side of the trail and the presence of a stone outhouse.  Our cook team is already there and within minutes lunch is served.  We spend perhaps an hour sitting in the shade and relaxing and then it is off again. 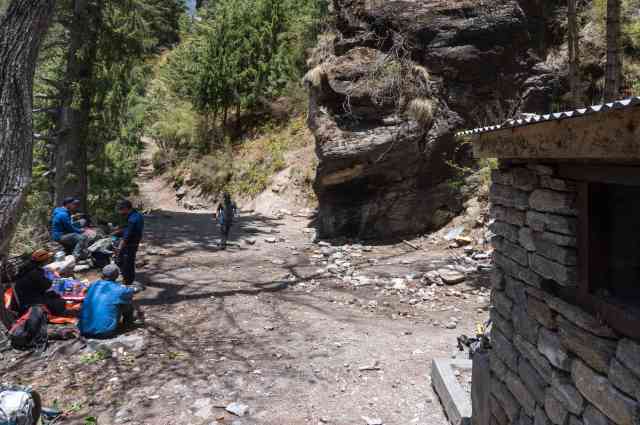 The trail leads to a new metal bridge perhaps 20 meters up but we choose the log bridge. 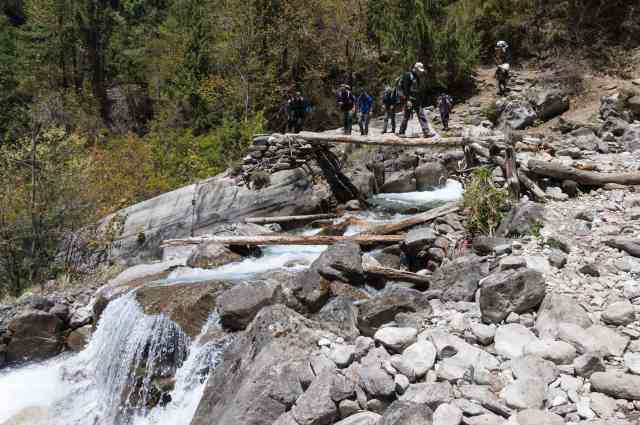 There are still a couple more bridges to cross as the trail goes from one side of the river to the other.  The sections of forest trail are interspersed with some dramatic 100-meter stretches carved out of the rock face.  The one in the image below is on river right as we approach Koto.

looking back (i.e. north)  at a section of the trail near Koto blasted out of the rock face

As we walked across the metal bridge I stopped to take a photo of the fourth major river of our trek.

Now I was looking at the Marsyangdi Nadi, the river whose headwaters is up near Manang and which flows down to Besi Sahar, the starting point of the Annapurna Circuit and the end point of our trip.

The rivers, as much as the snow-covered mountains they come from, had provided the framework of our 200+ kilometer walk through some incredible country.

the Marsyangdi Nadi as it flows under the bridge at Koto

Just on the other side of the bridge I looked down to the left and saw a town garbage dump. My thoughts turned back to the trekkers’ notice on the other side – “Return batteries and non-disposable waste for proper disposal”.  Later that afternoon I would see the following dump no more than 5 meters off the road into Koto –

Koto garbage dump on the side of the road

While not discounting the mess that a few trekkers cause, the garbage dumps like the one I was looking at are clearly the work of Nepalis and they need to take responsibility and do something about the plastic containers and wrappers and glass beer bottles.  Perhaps putting a price on the empty bottles and cans would encourage people to bring them to a central deposit place where they could be dealt with more appropriately.

Naar-Phu Checkpoint and gateway to the Nar Phu trail

Main Street Koto is the Annapurna Circuit trail.  We passed the checkout and turned left on to the road you see below.  We were headed for the Hotel Super View and its lawn, which would be our campsite for a night.

Koto at 2 in the afternoon

Koto – Hotel Super View – one of many guesthouse options