Cycling Around Tasmania – From Deloraine To Gowrie Park via Sheffield

Click on the More options prompt on the top left corner for a full screen view.

I left my Meander riverside campsite by 8:30  on Monday morning and found a restaurant on Emu Bay Road. A cup of coffee and a quick nibble and it was off for the morning’s ride.  The goal for the day was a tent spot at Gowrie Park but I would first cycle to Sheffield for lunch.  The elevation chart above shows the morning ride through genteel Tassie farm country. I saw very little traffic on the road, even on the A1 that I followed from Deloraine to just before Elizabethtown.  The B and C series roads were even quieter.

I wondered where all the other cyclists were!  My seventh day on the road from Hobart and I had only seen one solo American cyclist in Triabunna and a Canadian couple at St. Helens putting their bike on the bus. That was it – far fewer fellow cyclists than I figured I’d see! 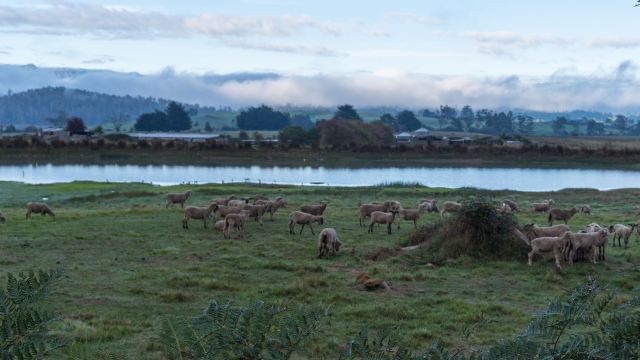 Early morning scene on the road from Deloraine to Elizabethtown 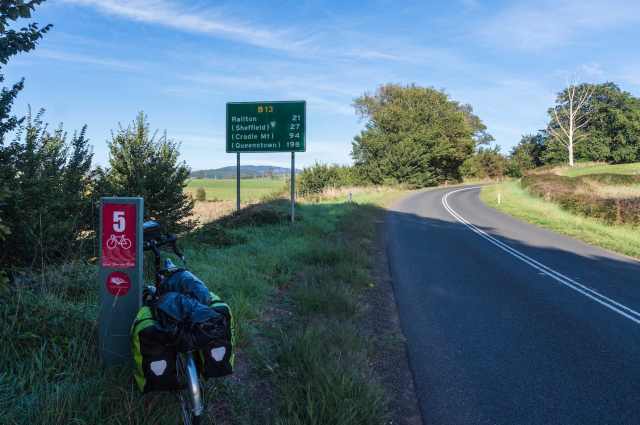 a stretch of the B13 to Sheffield

The B13 took me on a long downhill to the Mersey River.  At the Mersey River, I made a sharp left turn on to C156 (Bridle Track Road) which eventually runs into B14 perhaps 3 kilometers from Sheffield. Given I was in the middle of farm country it was no surprise to learn that Sheffield is a farm supply center for the region. 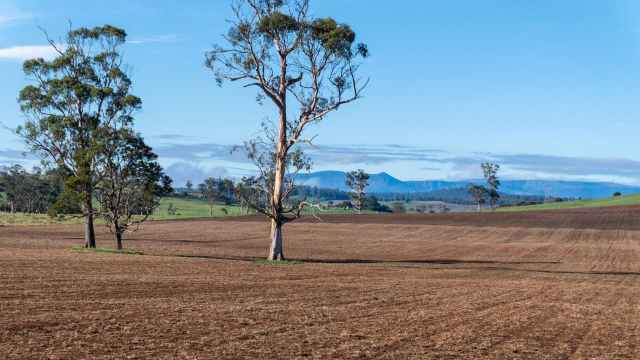 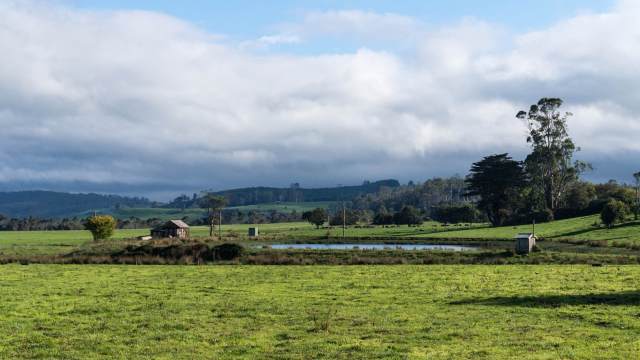 fields, farm sheds, and pond near Sheffield in Tasmania 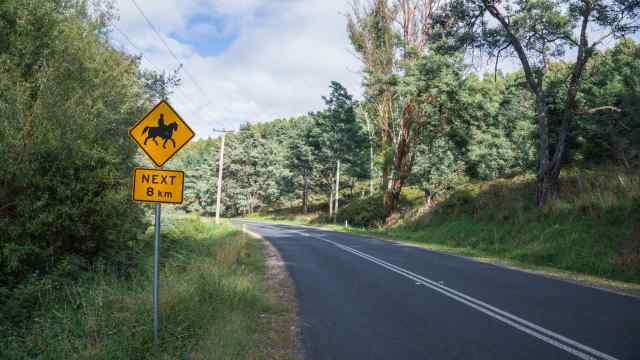 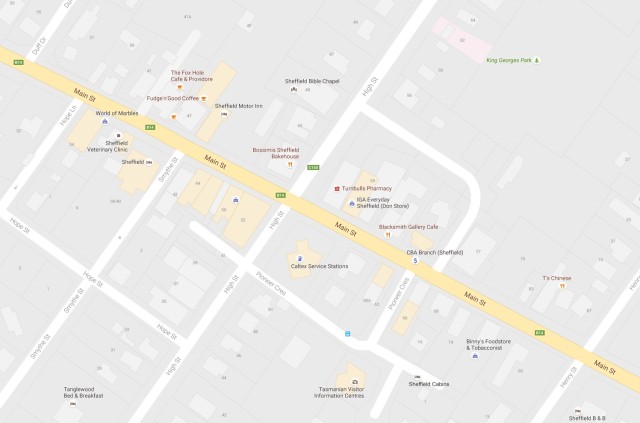 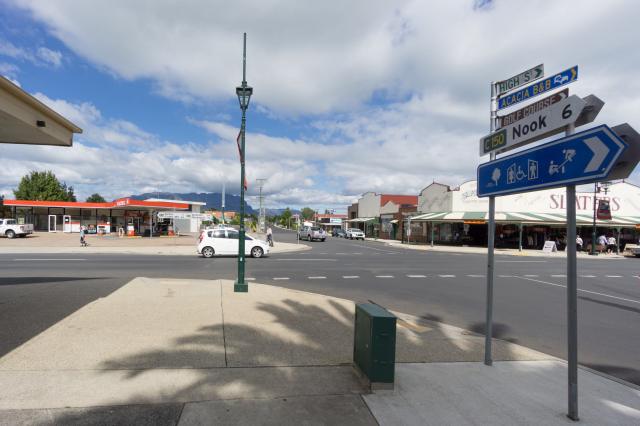 I cycled down Main Street looking for a cup of coffee and a wi-fi connection so I could check my email. I found it at Fudge ‘n’ Good Coffee, a popular spot with a steady steam of tourists coming in. 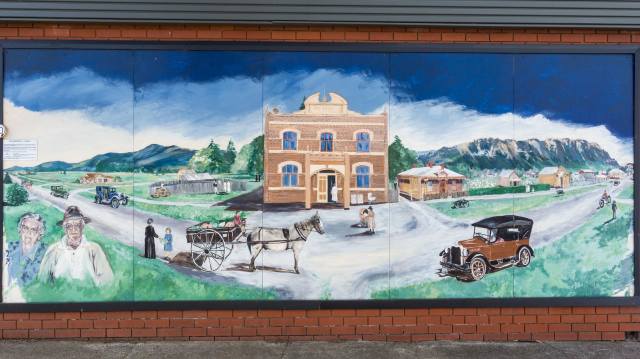 Lunch and email done, I had to check out the wall murals for which the town has become famous.  On another bicycle tour on Vancouver Island back in 2001 I had cycled through Chemainus and been impressed with the murals scattered around the downtown area. It was part of an effort to revitalize the town and create a tourist attraction at the same time and it worked. Well, apparently Sheffield heard of the project and applied the idea to their own town. As the Lonely Planet Guide to Tasmania (2015) notes –

Sheffield is now a veritable outdoor art gallery, with more than 50 fantastic large-scale murals and an annual painting festival to produce more. 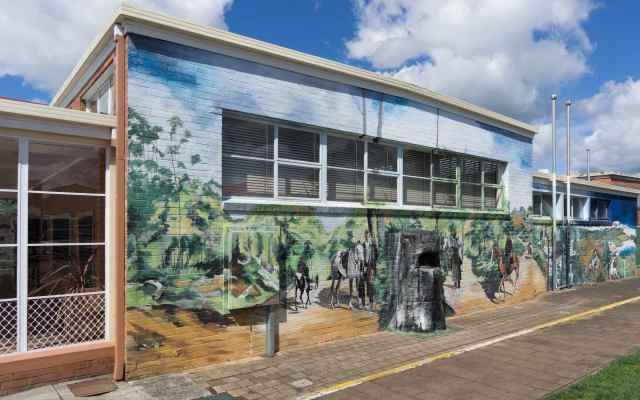 I spent about an hour walking around and framing shots of various murals that caught my eye – lots of nostalgia and creativity and a bit of whimsy were on display! 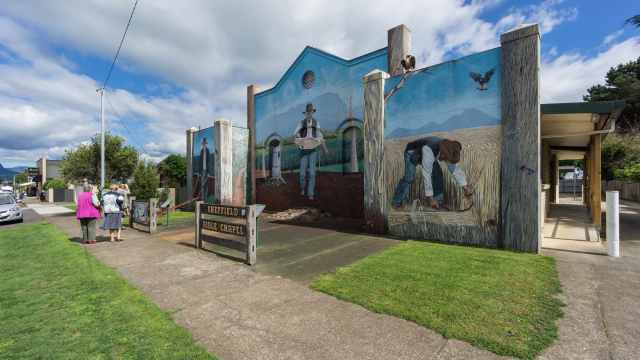 Sheffield Bible College Wall Mural – As you sow, so shall ye reap. 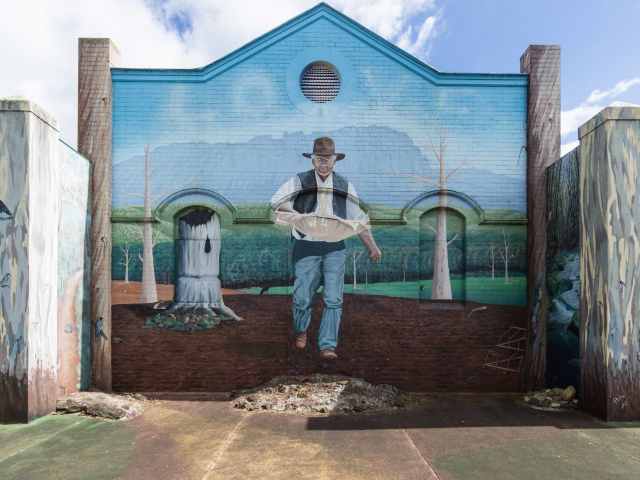 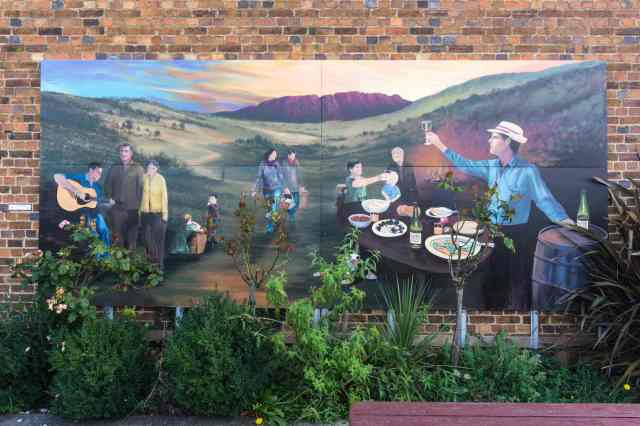 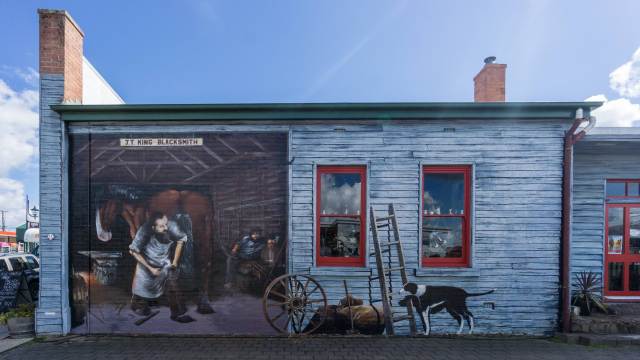 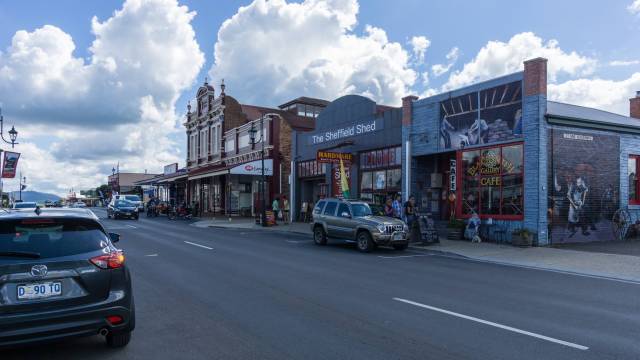 After a quick visit to the local IGA for some fresh fruits, nuts, and water it was time to finish off the day with the ride to Gowrie Park. It started with a slight climb on my way out of Sheffield and then after a nice ride downhill to the Dasher River was followed by a slight uphill all the way to the Wilderness Village and my tent spot.  Shower and laundry facilities, as well as a small kitchen/eating area  with microwave and kettle and dishes – all very well looked after – not a bad base camp if you wanted to stop and do some day hikes in the immediate area. 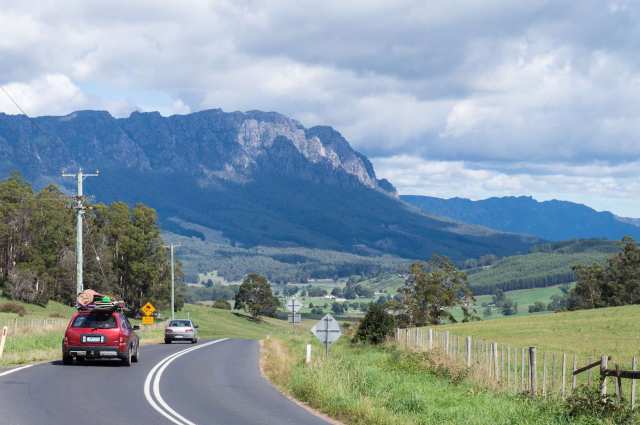 a view from the road of farm fields near Gowrie Park

That evening I wandered down the road from the Wilderness Park to a nearby restaurant,  Weindorfer’s. (It was up for sale when I was there in March 2016 and may be under new ownership.)  While there was nothing vegetarian indicated on the menu –  a common theme in Tasmania –  the kitchen did put together a simple pasta with vegetables dish that hit the spot. 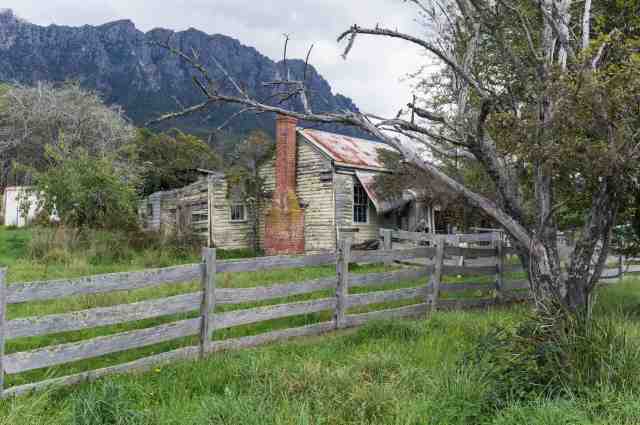 Below is a satellite view of Mount Roland (4045’/1233m), a part of the Great Western Tiers that I had first looked at from Deloraine the previous afternoon.  There is a hiking trail that takes you up to the ridge. 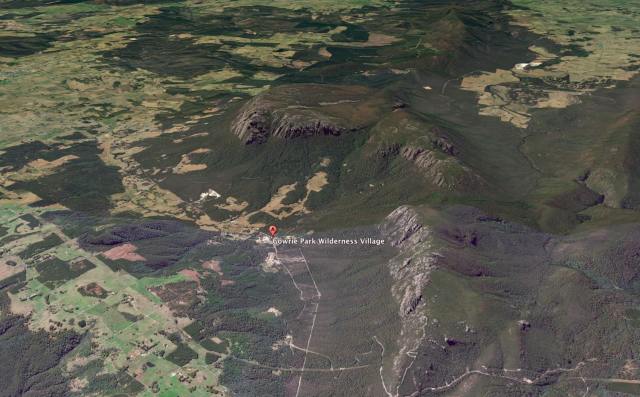 The total distance as an out-and-back from Gowrie Park is about 16km with an elevation difference of about 900 meters.  The  round trip time from the car park is about six hours, including breaks. Apparently, the face of Mount Roland even has rock climbing potential  – see here for some challenging route ideas that I googled my way into. 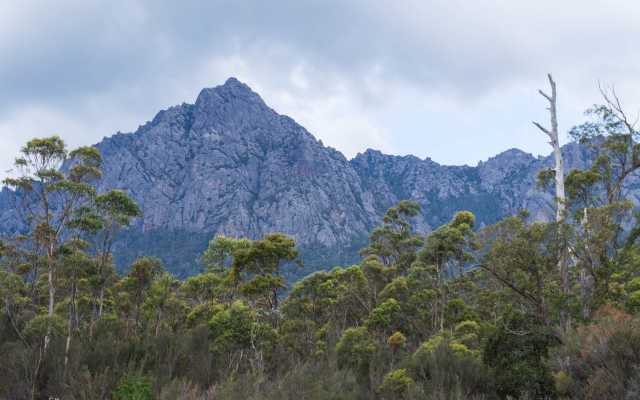 Tempting but not possible  –  I would not be hiking up to the top the next morning.  I had already prepaid a tent site at Cradle Mountain for the next two nights so I had to stay on schedule!  A good thing too since Cradle Mountain was completely booked when I arrived.

But, of course, the price of prearranged accommodation is that it does not allow sudden changes in plans if you come across worthwhile options that you could not have been aware of when you first made them.

Coming up – Cradle Mountain and a chance to slip on those hiking boots for a morning’s walk around Dove Lake. But first – I had to get there. 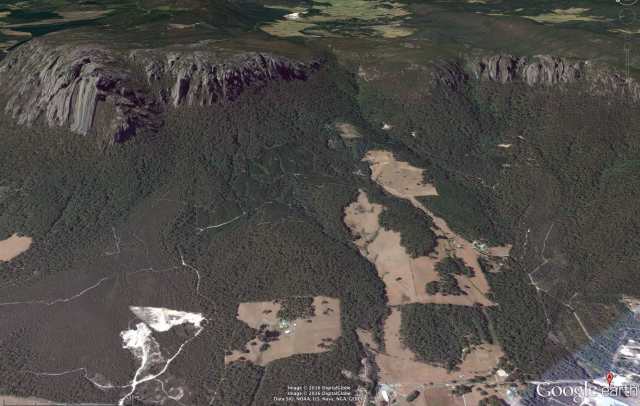