Cycling Around Tasmania – Launceston To Deloraine

Sunday morning is my favourite time to be on the road; the absence of traffic makes for a stress-free ride.  The week before I had left Tasmania’s largest city – Hobart – on a  Sunday morning; now I was doing it again but from Launceston, the second largest of the island’s towns. From my backpackers’ hostel I found my way to Westbury Road by 8:00 a.m. and followed it up to the top of a steep climb out of town – see the elevation chart above! – until it becomes B54. Thirty minutes on the road and I had done the day’s major climb!  For the rest of the three-hour ride, the terrain was pretty much flat and I found myself in Deloraine before noon.

an empty Sunday morning road on the way to Deloraine

B54 passes through a number of tiny hamlets and by expansive farm fields.  It was March so harvest time had come and gone. I framed the flat road and an occasional herd of dairy cattle in my camera viewfinder to capture the essence of the day’s ride.  Given that the A1 – a major thoroughfare – is nearby, the secondary roads I was cycling remained all but empty the whole way to Deloraine.

Meander Valley fields on an overcast Sunday morning in March 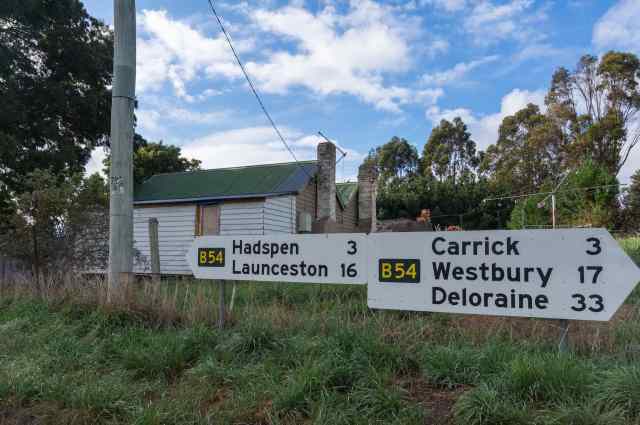 another B54 distance marker in the Meander Valley

At 9:00 or so I cycled through Carrick and the Inn pictured below.  A cup of coffee – Down Under I’ve learned to order  a flat white with soy milk – would make a nice reward for the early start to the day!  Unfortunately,  the restaurant was not yet open for Sunday business; staff was still cleaning up the Saturday night mess! 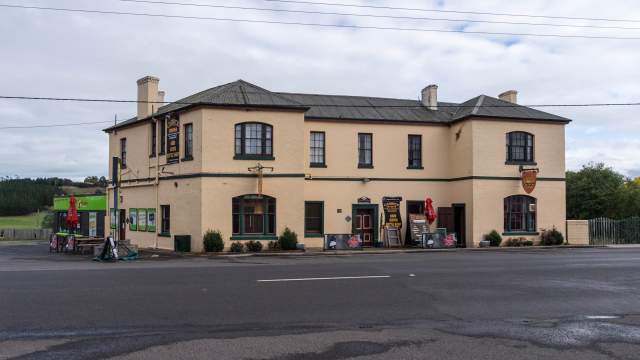 The Carrick Inn on B54 – too early for Sunday morning eats

Off to the next possibility just a minute or two down the road –  The Mill Inn.  The lines slashed through the food and beverage part of their offerings made it clear that there would be no flat white here either.

Not far after Carrick The Meander Valley Road (B54) crosses over the Bass Highway (A1) and continues almost all the way to Deloraine. The satellite view below has B54 crossing above A1 in the middle of the image; the patchwork of farm fields captures the essential nature of the region. 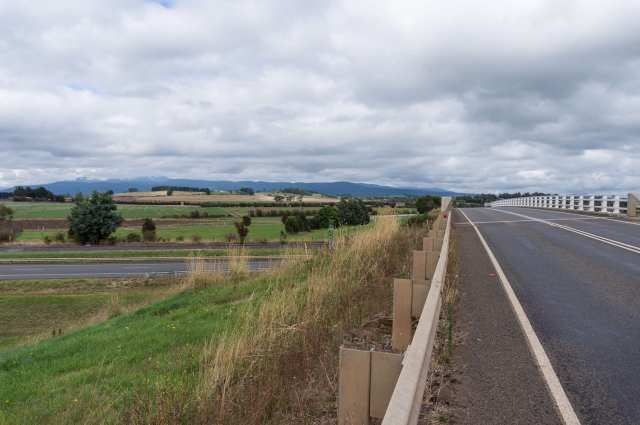 B54 overpass – A1 (Bass Highway)  underneath

dairy herd in the fields before Deloraine

Just before The Meander Valley Road gets to Deloraine it merges with the A5, which then takes you right to the bridge crossing the Meander River and into downtown Deloraine.

Draped over hills beside the Meander River, DELORAINE is a pleasant spot on the route west. The area was settled by Europeans in the 1830s, but Deloraine was a late-starter, developing from 1846, and today it’s National Trust classified, its backstreets stuffed with historic houses. But don’t let that put you off – architecture is only a backdrop to this town’s quietly bohemian vibe. Numerous arts and crafts galleries line the streets – for a taster there’s Deloraine Creative Studios … the outlet for several local producers, and the largest of the many shops in town.  Rough Guides Snapshot. “Rough Guides Snapshot Tasmania. (2014)

I headed for the Deloraine Apex Caravan Park.  The main office for the Park is in a bungalow across the street from the caravan and tent site. I paid my $10. and got my key to access the various facilities – showers, toilets, cooking area – and then walked my loaded bicycle down to the Meander River.  I found a nice sheltered spot under the tree pictured in the image below.  Once the tent was up I unpacked the sleeping bag and inflated the Thermarest pad.  After rambling around the park for a while – there is a bridge that takes you to the other side for a different perspective – it was time to focus on essentials.  Coffee and food on the main street!

The Deloraine Apex Caravan Park – campers along the Meander River 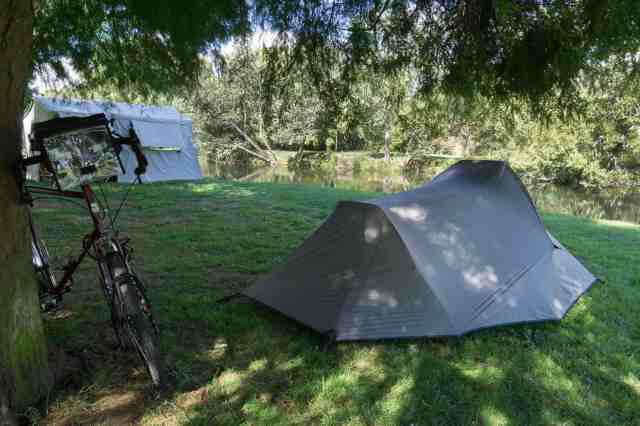 I left my bike at the tent site and made my way up the hill on West Goderich Street to the main drag – Emu  Bay Road.  The one thing Deloraine does have was nice views of  The Great Western Tiers, a set of hills in the hazy distance.  Okay, so it’s not the Himalayas but still – it does introduce a bit of drama in an otherwise fairly tame landscape. (I would be looking for other words  later in the journey at Cradle Mountain and then at Strahan on the West Coast – not tame!)

The next day I would be camping underneath Mount Roland, one of the bumps or ridges on the horizon that I viewed from the back porch of the Great Western Tiers Visitor Centre on Emu Bay Rd.;  the Centre is worth a visit thanks to informative displays and lots of tourist info and helpful staff. 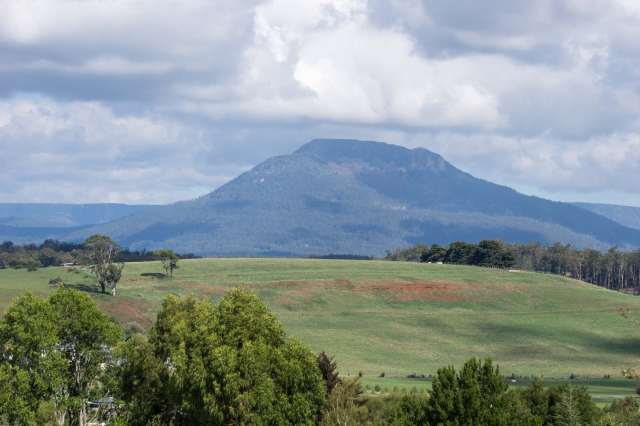 Quamby Bluff – a view from Deloraine

In retrospect, Deloraine would have made a good spot to stop for lunch and to take in the views I framed above but as for that “quietly bohemian vibe” mentioned in the Rough Guide review –  I wasn’t feeling it!  There is “laid back” and then there’s “dead”!

Perhaps the fact that it was a sleepy Sunday afternoon in autumn explains the nothing-happening feel of the place.  Another 40 kilometers – two and half hours – and I would have been in Sheffield by mid-afternoon in what seemed to me a  more interesting little town with more to look at and with more restaurants open past 5 p.m.