-10ºC and Snow in Toronto – Great For Tobogganning!

toboggan: a Quebec French word from the Anishinaabe (i.e.Algonkian) word topagan meaning “sled”.  Along with “toque” and “loonie” and “eh” and “two-four”, the word makes most sense to fellow Canadians!

overview of the Broadview sliding hill – spot the CN Tower!

We’ve had a cold stretch here in Toronto and it doesn’t look like things are warming up any day soon! Here is the Weather Network forecast for the next week – some low nighttime temps coming up, including -19ºC tonight. Also expected – another 5 to 10 cm. of snow!

I grabbed my iPhone as I left the house. Since I was walking past the section of Broadview Avenue popular with sledders and sliders, I figured I’d grab a shot or two of the scene. I had just been exchanging emails with someone in the Serengeti region of Tanzania; I planned on sending him a photo of what things look like here on a sunny -9ºC afternoon.  He might get a chuckle at the contrast with what he has!

I walked up our street to Broadview. While the sidewalks are now mostly bare, there are still snow piles of snow on the curb.  Early this week we got a month’s worth of snow in a day! It will be a while before the City crew comes by and takes it away.

There were dozens of people -more often than not, the parents – standing at the top of the hill when I got to Broadview.  The hardpacked snow surface was giving the tobogganners the thrills they were after.

At the south end of the hill is where the parents with younger children head; the slope is more moderate and it makes for a better introduction to this quintessential Canadian pastime! The activity is not without its risks; last week an Ottawa child died on her first-ever try at tobogganing. 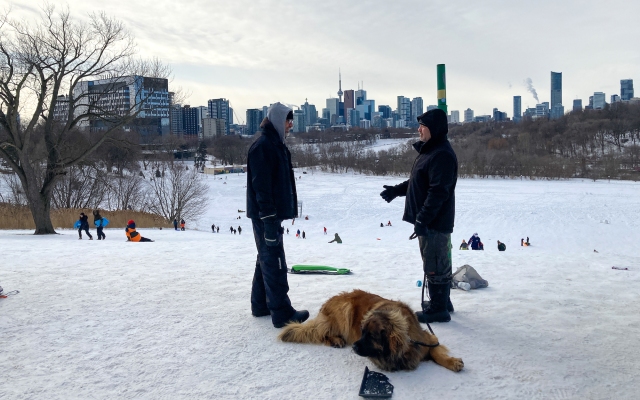 I passed these two guys standing there with their chillin’ Leonberger and my thoughts turned to our own dog, an Icelandic sheepdog named Viggo.  We have walked up and down this hill a thousand times over the past 12 years.  For the past couple of months, I have not been out doing the daily five or six kilometers that Viggo and I used to – we lost Viggo to liver cancer in November and things just haven’t been the same.

What used to be done on wooden toboggans – that is, sleds with curled-up fronts like the one pictured below  –  when I was a bit younger back in the late 1950s,  is now done mostly on plastic!

the classic wooden toboggan from back in the day! 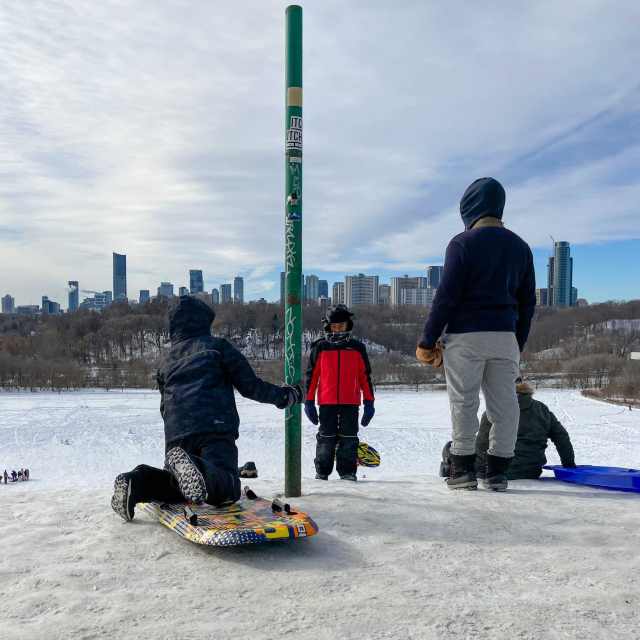 I never did stick around to see if the passenger on this sled was able to hold on to her iPhone all the way down – or whether they ended up tumbling off the sled before they got to the bottom.  Let’s hope she was able to post an awesome TikTok video of their epic 20-second slide down Broadview Hill!

Across the street from the slopes sits a local landmark, the Ukrainian Catholic Church – definitely an eye-catching piece of architecture that blends tradition with modernity.

As you walk north along Broadview you soon come to the tennis courts; there are four of them and they are all buried under a meter of snow.  It is a good thing that Felix Auger-Aliassime and Denis Shapovalov are playing down under right now!

Next to the courts is the hockey rink and beside it is an open skating area for folks without hockey sticks. 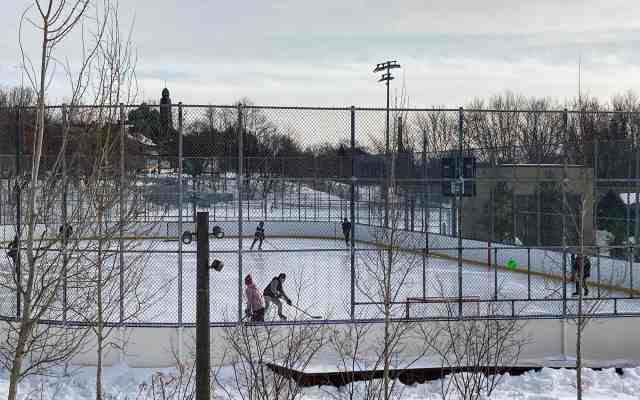 As I passed by, skaters were lined on the perimeter of the open skating area waiting for the Zamboni machine to finish cleaning the ice. 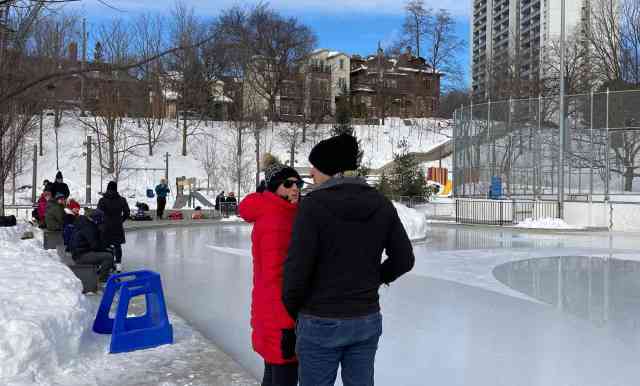 Even though the thermometer read -8ºC, it felt great to be outside and do a bit of walking!

Just north of the skating rink is the Loblaw’s grocery store where I was headed.  All the way up I had stepped aside to keep my distance from other walkers.  Now – as we approach Year 3 on the Covid calendar – I slipped on my black N95 mask and headed inside to do a bit of shopping.

2 Responses to -10ºC and Snow in Toronto – Great For Tobogganning!