Temagami’s Lady Evelyn River From Top to Bottom: Day 5 – From Florence Lake To The Forks 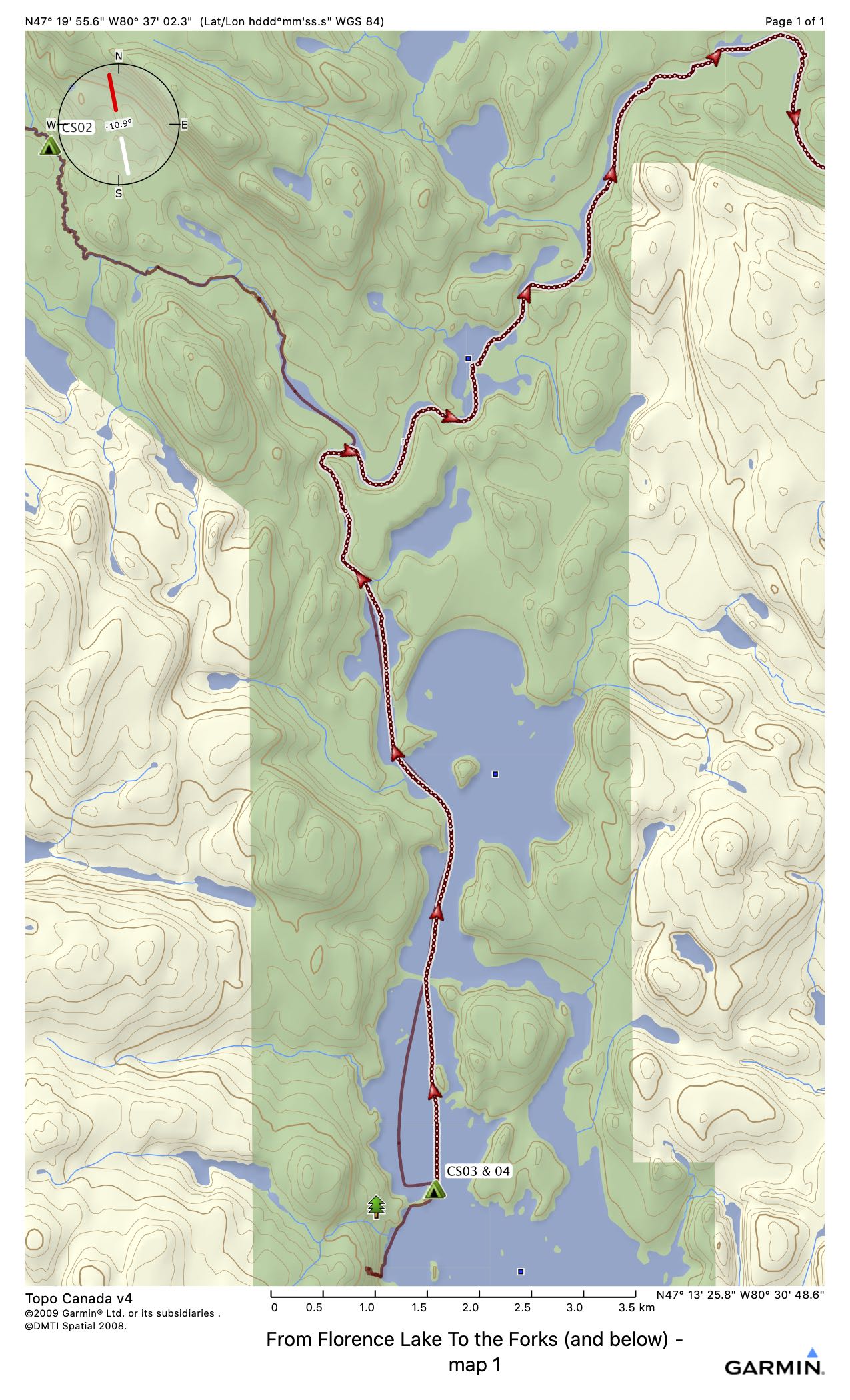 We were up early and ready to shift back into paddling mode after a rest day where the only thing we did was climb up to the viewpoint 80 meters above the lake on the sloped rock outcrop to the south of our campsite.  An early morning mist hung over the lake as we looked east at the sun which was just beginning to emerge.

looking southeast from our Florence Lake campsite at dawn

A better day weather-wise day seemed to be in the cards – a nice change from the mostly overcast and cool conditions we had up to then.  The goal for the day was The Forks, the point where the two branches of the Lady Evelyn meet. It would mean about 30 kilometers of paddling. 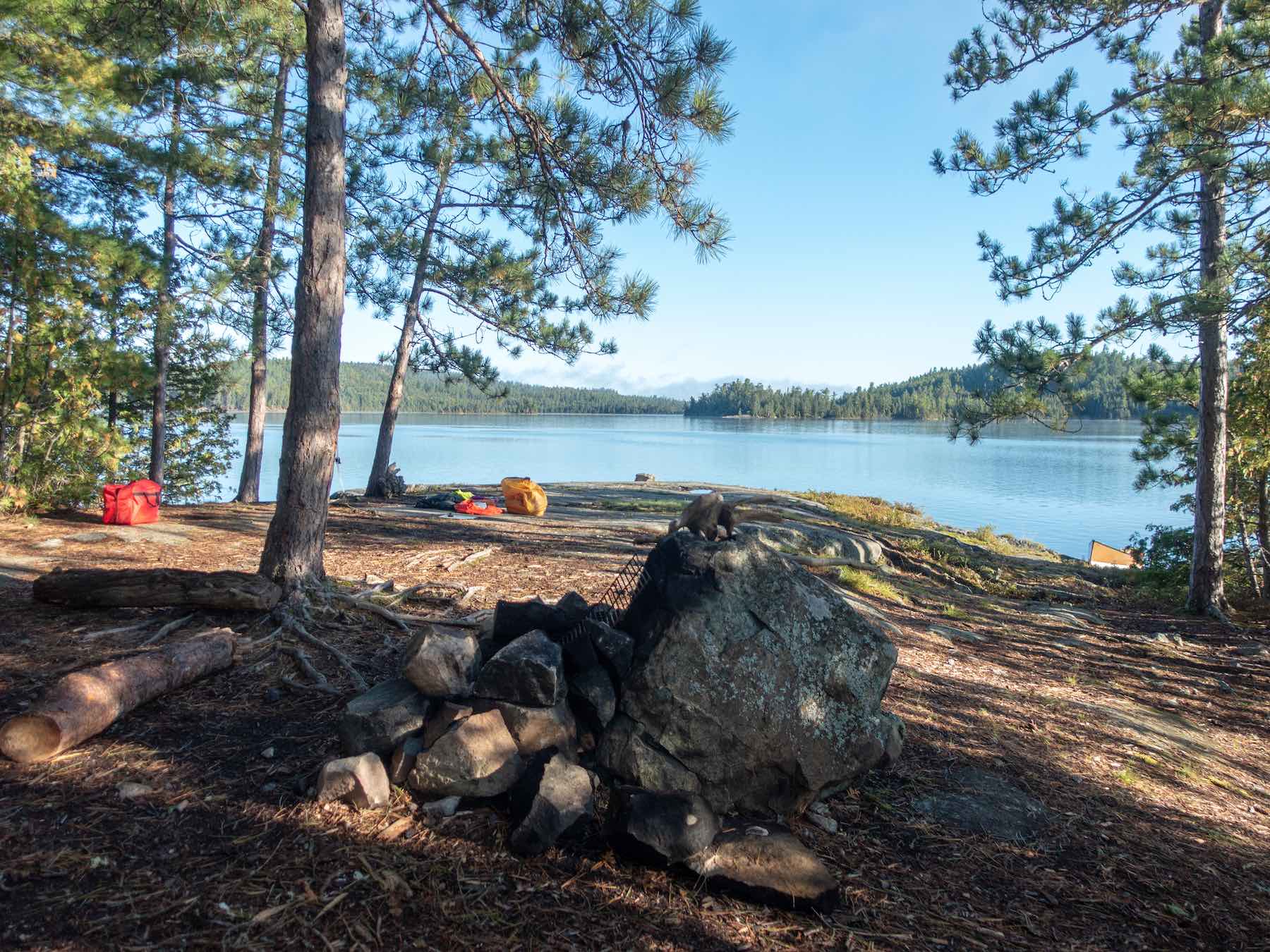 We looked over to the other side of the lake and a campsite with the name Table Rock. The Ottertooth map in map case noted that at the campsite we’d find –

“a dolmen sitting on several small rocks. Possible ancient sacred site with mystery around how or why positioned.”

Sounded promising!  A dolmen –  defined as a megalithic tomb with a large flat stone laid on upright ones, found chiefly in Britain and France.  I had seen some dolmen structures in Ireland and had them in my mind as we left our campsite, intrigued that something similarly impressive might be seen on this very lake!

There is a 2014 Bill Steer (aka Backroads Bill) article on dolmen stones in northern Ontario. See here for the article, which begins with an image of a dolmen from Israel that actually looks like a dolmen and then shifts to three examples from northwestern Ontario.  The images of two of them both show three smaller stones elevating the much bigger one so that it is sitting about 10 to 20 centimeters above the rock outcrop. 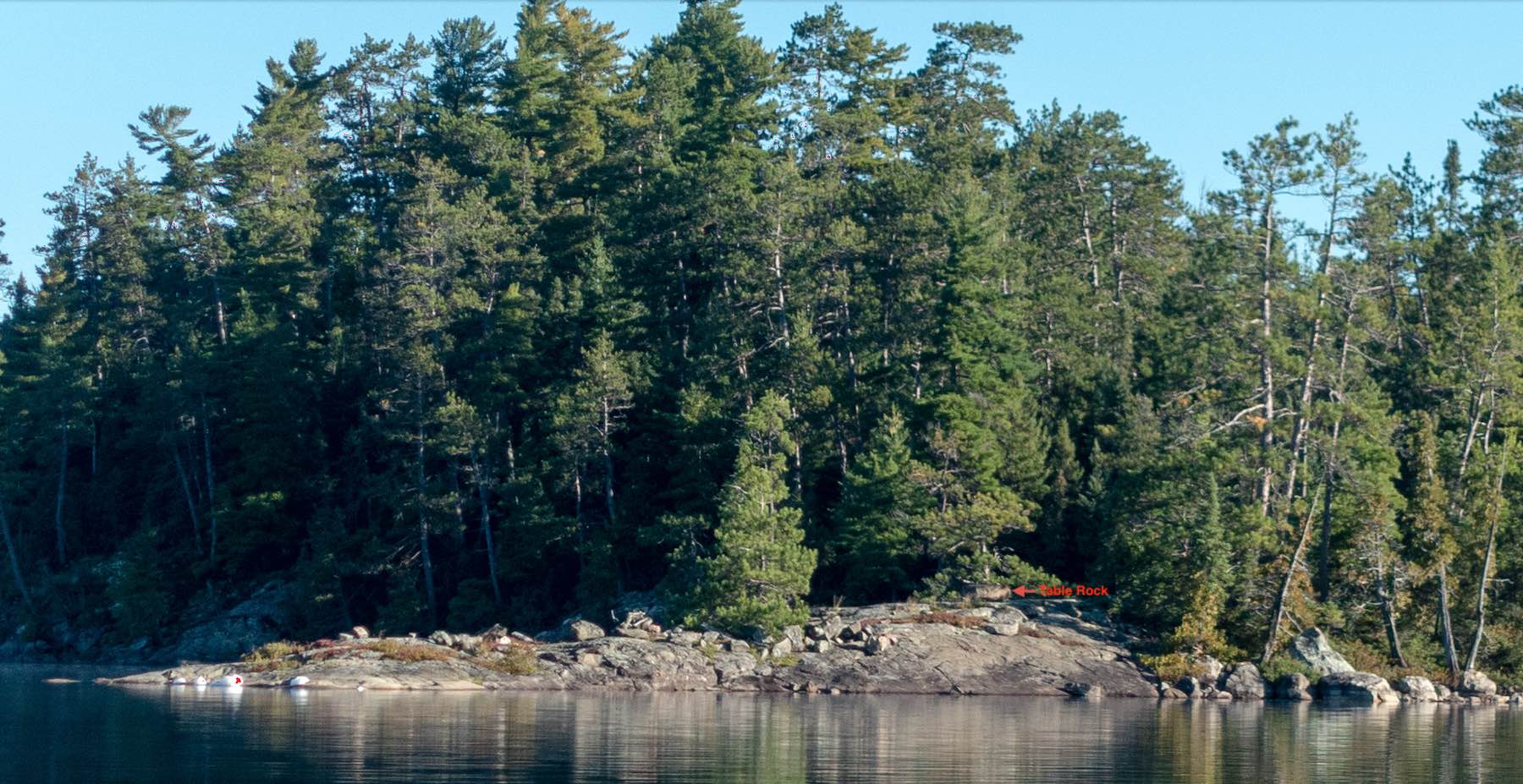 Once at the campsite – an okay fair-weather site that is quite exposed to the wind and without a really flat spot to pitch a 4-P tent – we weren’t seeing anything that looked like a dolmen. The mystery continued for a minute or so – and then we realized that the 1.5m chunk of rectangular rock with a couple of small rocks slightly propping up one end was what we were looking for! To describe it as even a humble example of a dolmen would be really pushing it!

A more probable explanation – a party of four bored campers or maybe a group from one of Lake Temagami’s summer camps had one afternoon pried the rectangular rock chunk up and shoved a couple of smaller stones underneath to level its top and create a flatter area for their cooking utensils or plates – hence “Table Rock”.

No offence to the few pre-European contact Anishinaabe-speaking families whose hunting grounds this may have been over the centuries in fall and winter,  but you have to wonder about the fantasy-prone individual  (almost certainly not Indigenous) who was able to create a bogus “ancient sacred site” out of this rock and then postulate about why it was pointed in the direction it was!  The Ottertooth map note just perpetuates the silliness.

From Table Rock we looked west towards our campsite of the two previous nights; it had been a good one but we were happy to be on the move again. Max was feeling much better than he had been a couple of days before.

As we paddled north to the lake’s outlet – the Florence River – we came again to the collapsed cabin and got a few more shots. This time the photos had blue sky in them! [See Day 3 post for more cabin pix!] 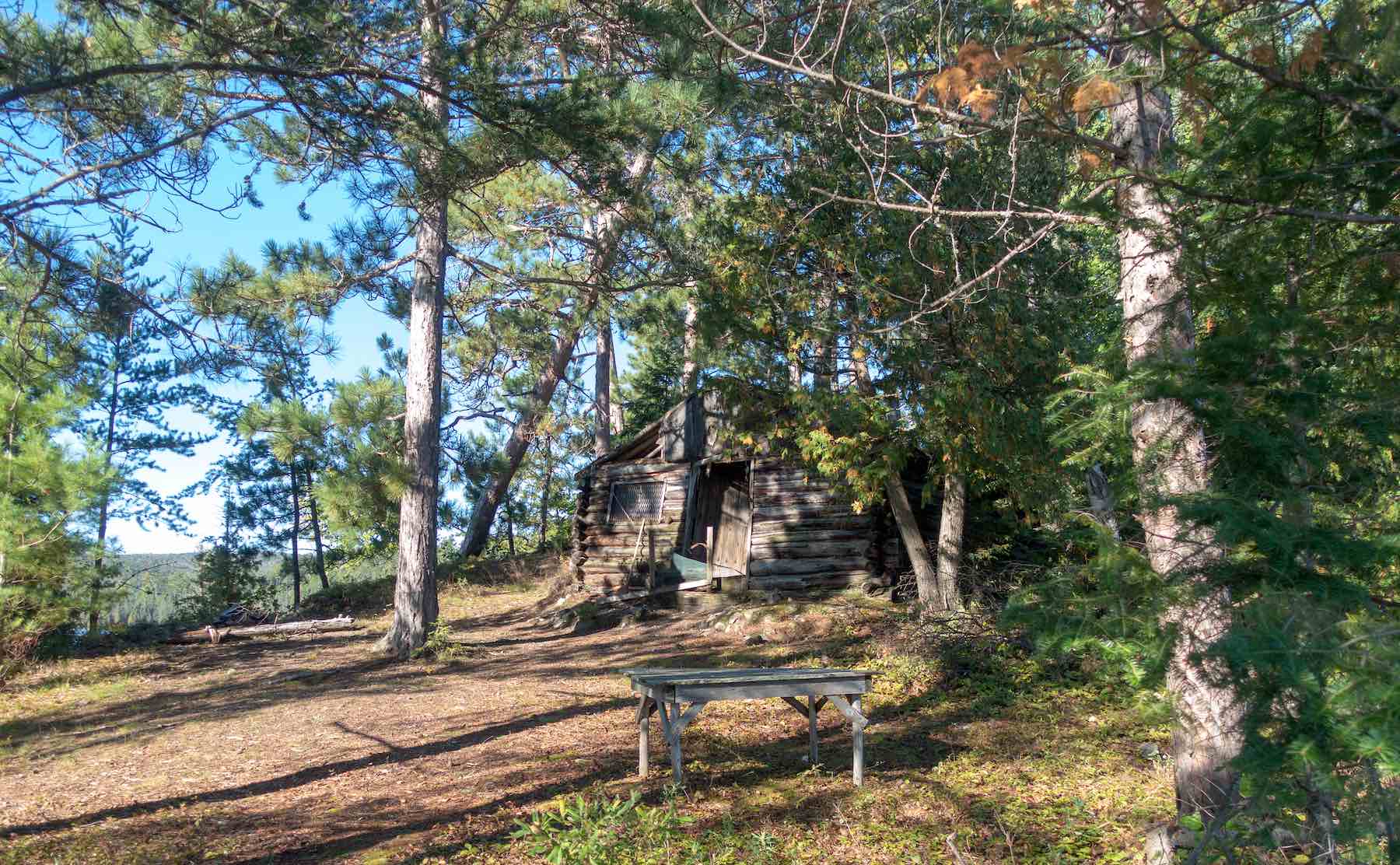 The cabin was built in the mid-1950s (says the note on the Ottertooth map); 65 years on it was in a state of terminal decline. No doubt it served as a good tent during its prime.

Down the Florence River we went (no current), past the mediocre campsite at the north end of the lake, and not quite close enough to the one and only moose we saw during our ten-days out –  and then back on the Lady Evelyn’s South Branch. The water level was fairly shallow here – maybe 1 1/2 to 2 feet deep. Half-paddles were all we could do!

As noted already, there were lilies up the mouth of the river and above and below the confluence all the way down to Duff Lake.  Progress this day came easier once we got beyond the lily pond. We stuck with the South Branch right to the Forks.  We were enjoying our first blue sky and sunshine day of the trip 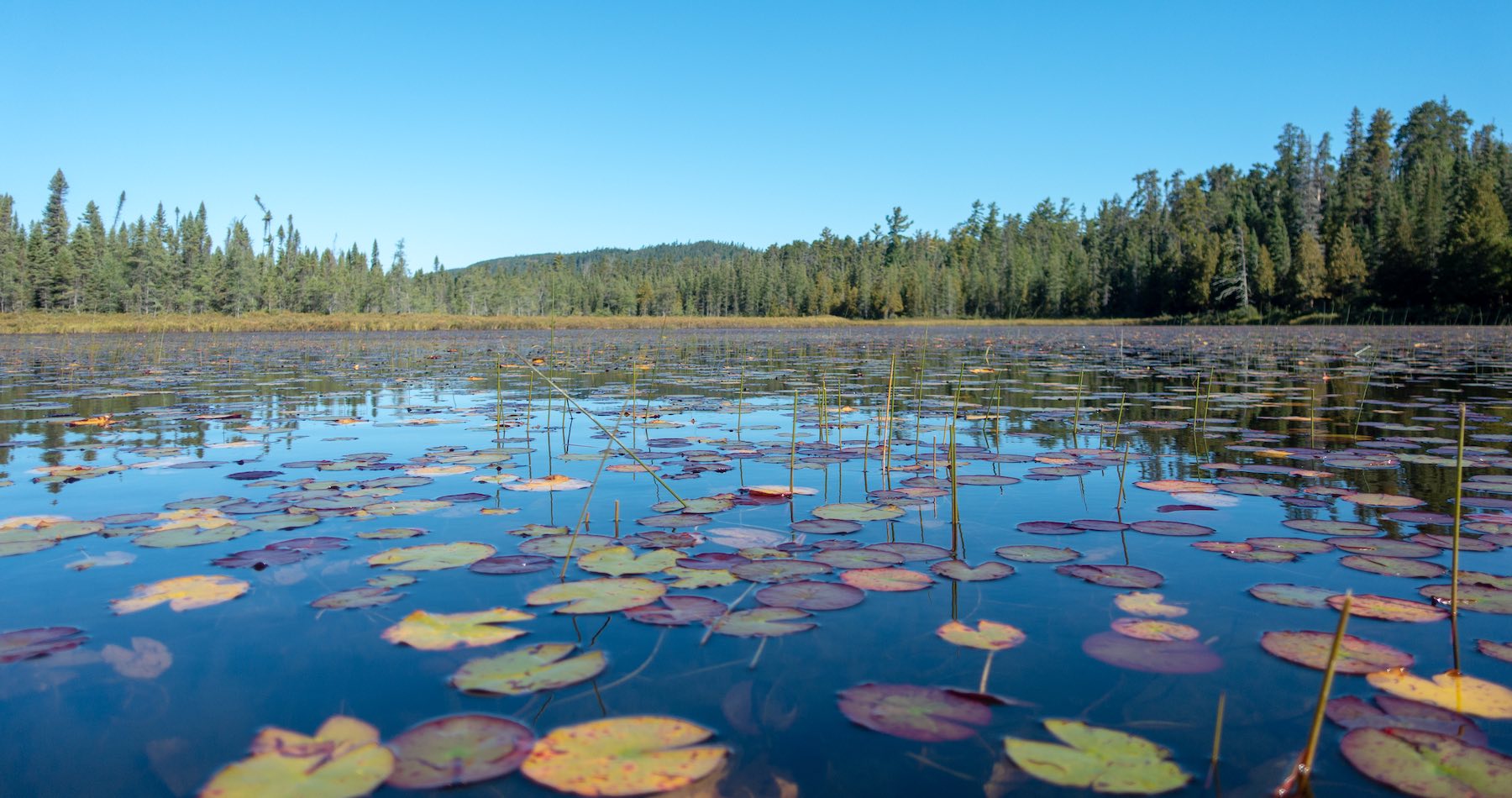 Two kilometers north of Duff Lake – about halfway down Jack’s Lake – is a campsite marked on both the Ottertooth and Chrismar maps.

It is on river right on the flat top of a sloped rock outcrop and there are multiple tent site possibilities, some nicely sheltered. A fire pit and – in the bush behind the site – a toilet box complete the site.  The views from the elevated spot are great – definitely a decent place to stop. And yet again,  no litter, no mess to be found!

The one set of rapids on the south branch below the Florence Lake outlet is at White Rock Rapids (named Cedar Rapids in the Wilson guidebook), a short 40-meter Class 1 stretch that is easily run; it can also be lined or walked down.

Just below this set of rapids is another campsite. We found room for multiple tents, and while no spot was especially flat,  it would still make a good spot to stop for the night.  The usual fire pit, a toilet box at the end of a signed trail,  a very nice view of the fall colours to the south … maybe a B grade for this one!

See the Ottertooth Florence Lake map to get a better idea of these two options. 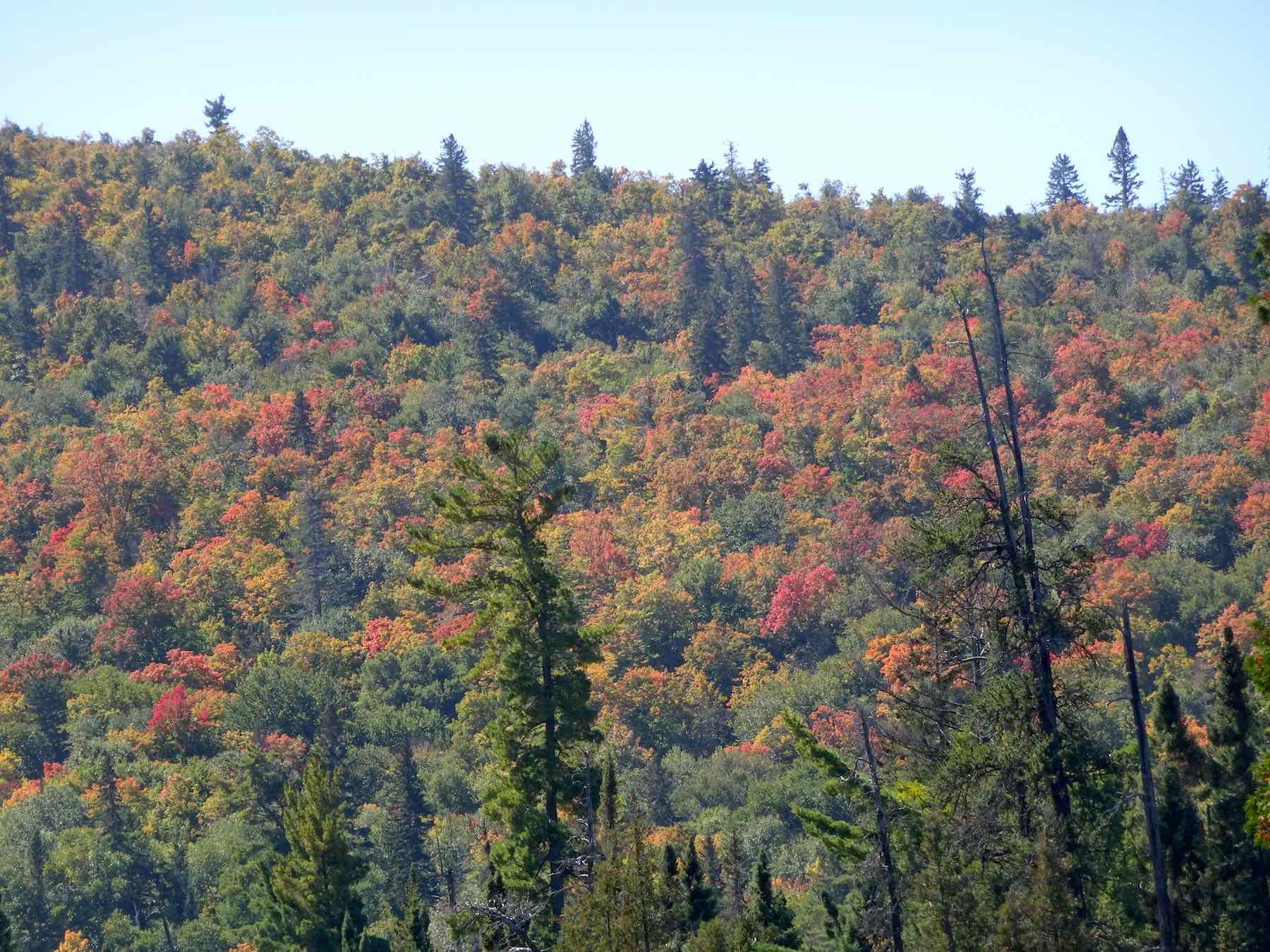 Having started off on the south branch’s headwaters on Apex or Whitemud Lake, there was no way we would abandon it three kilometers before The Forks! While we did find two or three beaver dams and some deadfall stretched across the river in the final stretch after White Rock rapids, they were easily dealt with. A bonus on the last 5 km. was a just noticeable current that added a 1km/hr. zip to our speed! We enjoyed our trip on the lower half of the south branch – scenic, small river stress-free paddling…a nice way to spend a day!

My mind creates expectations as I plan my trip route down a never-before-seen river. The Forks was a spot that took on special significance since it was the end of the South Branch as well as where it merged with the North Branch coming from near Beauty Lake.  With past river junctions in mind – maybe the dramatic Bloodvein-Gammon, I pictured 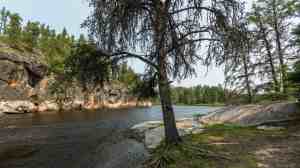 just below the Bloodvein/Gammon Junction

A quick glance at the topo map confirmed what the video below indicates –  I struck out!  Still, it was great to be at The Forks of the Lady Evelyn! 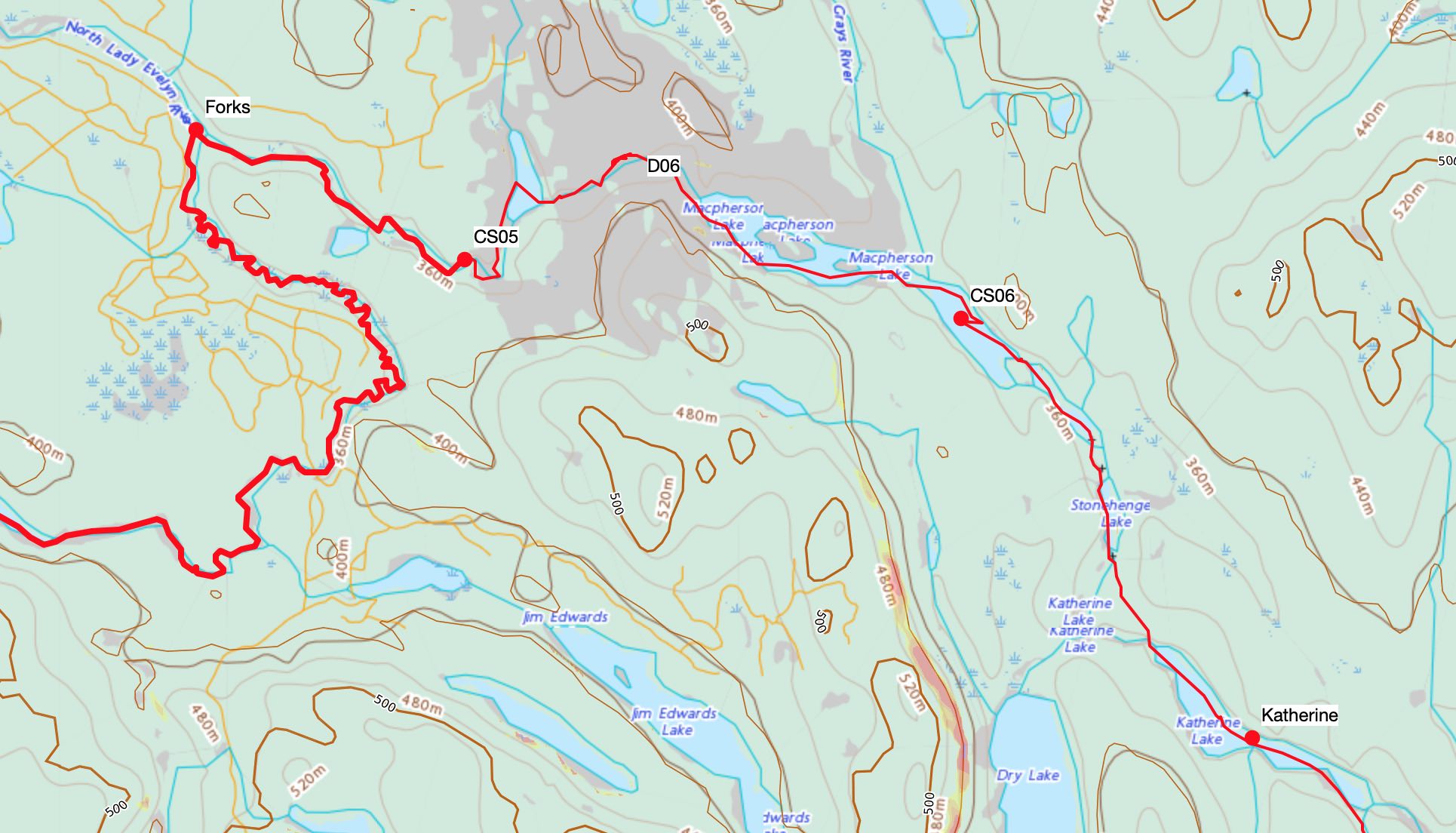 Lady Evelyn River’s Main Channel – the stretch from The Forks to Katherine Lake, where it divides again

We were now on the Main Channel – i.e. the stretch from the Forks to the bottom of Katherine Lake.  As we rounded the corner we encountered the first person we had met since the paddlers on Smoothwater Lake.  Under the impression that there was a roomy campsite on river right just below the Forks, I stepped ashore for a quick look, finding his tent and little room for anything else. [The site I was actually thinking of was one mentioned by Wilson and on the other side of the river. It has room for multiple tents.]

Back on the river a few meters down from the campsite we came to a log crossing the river with just enough room underneath for each of us to step over, push down our end of the canoe to squeeze it under and then hop back in.

Note: A bit of confusion here.  The Chrismar map indicates a 320-meter portage starting at the campsite we had just taken a look at. Then it has an identical 320-meter portage correctly placed 1 km. downriver.

It looks like the same portage has been put in two places! Neither the Hap Wilson guidebook (see here for a version) nor an Ottertooth map has a portage just below the Forks where the Chrismar map has placed one.

After our log step-over (see here for a pic of Max in action on another occasion), we headed down one kilometer to the first set of rapids – a Class 2 – and the 320-meter-or-so portage around them on river right, which took us 45 minutes to get done.

By now it was 4:45 and we were looking to end the day; both the Chrismar and Hap Wilson maps show a campsite 1.5 km. down from our put-in on river right.  The site sits just off the short portage trail across the point. That was going to be it.

CS05 (the campsite on the right side of the map above)  is where Day 5 ended, 32 kilometers downriver from the Florence Lake CS we had left eight hours before.

It had been a nice easy day on the river – but we knew the next day would be more work as we had to deal with close to a dozen sets of rapids and portages.

Our campsite sat right off the 40-meter portage trail but we weren’t expecting any traffic at the end of the day and figured that we’d be gone the next morning before anyone wearing a canoe came by.  While we were happy to find it given the time (almost 5 p.m.) the site is rather nondescript but serviceable; it has a toilet box nearby and there is room for a couple of tents.   We’d give it a C; it does the job.

We had a decision to make that night – would we paddle across the river to the left bank and do the portage or would we line and float our way down the river? 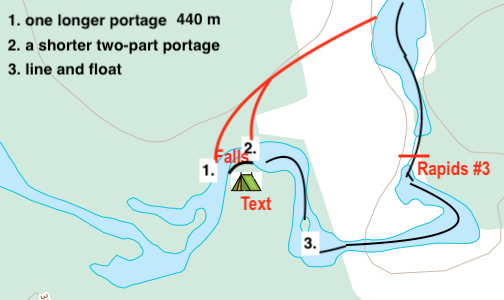