Temagami’s Lady Evelyn River From Top To Bottom: Day 3 – From Our “It’ll Do” Campsite To Florence Lake

Previous Post: Day 2 – The Upper Stretch of the South Branch – Some Work Required! 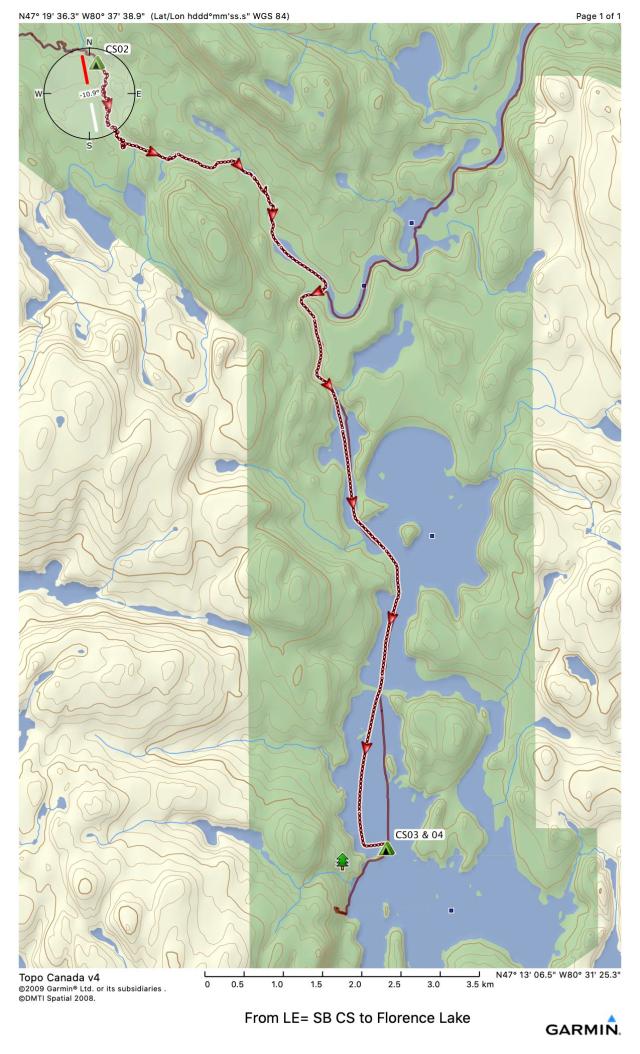 There had been some rain overnight.  In the morning we took down the tent underneath the tarp we had set up the night before and had breakfast. We set off; for a couple of hundred meters the meandering river becomes quite narrow and the alders on the banks occasionally met in the middle as we paddled our way through the bush!

And then a rare (for the South branch) sloped rock face as we rounded the bend not far from our start point. The day before as it approached 6 p.m. we had stopped for the night and created a makeshift campsite on river right.  Now – 260 meters downriver – we paddled toward a much better spot! 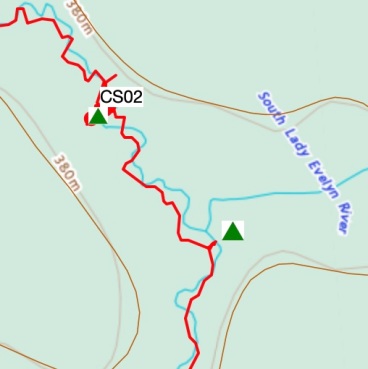 LE-SB “It’ll Do” CS and a definite upgrade 260 meters downriver!

panorama of upper Lady Evelyn south branch from the campsite

Once back home after the trip, I was rereading Hap Wilson’s Temagami canoe tripping guide book and realized that he describes the very site that we came to – 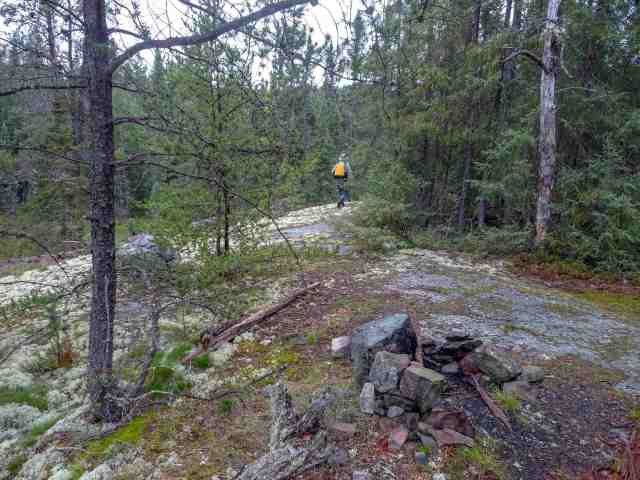 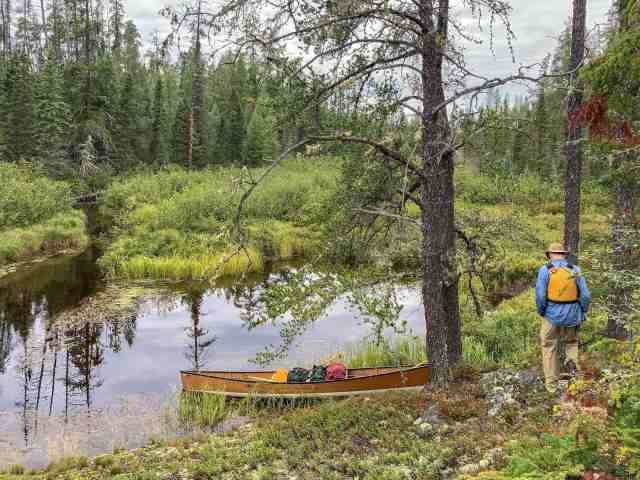 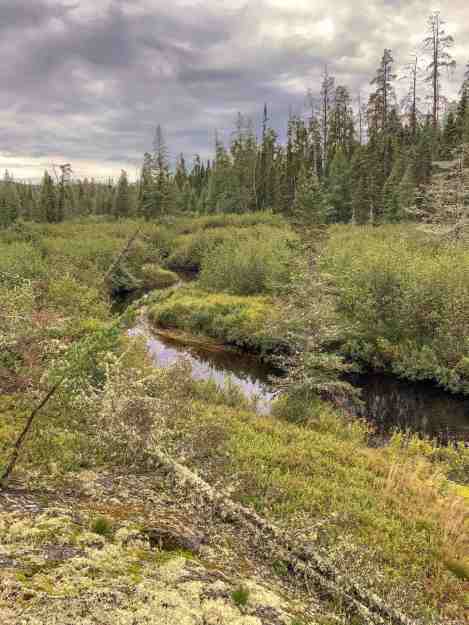 Back to the canoe, we headed for what would turn out to be the last short meandering stretch of the river; the progress was slow – less than half our usual cruising speed – but it was easy and going down the middle we were able to touch either side of the river with our paddles.

The circle on the map above highlights the last major meander on the upper South Branch;  after that, the river straightens and within a couple of kilometers takes you to some actual rapids and portages. 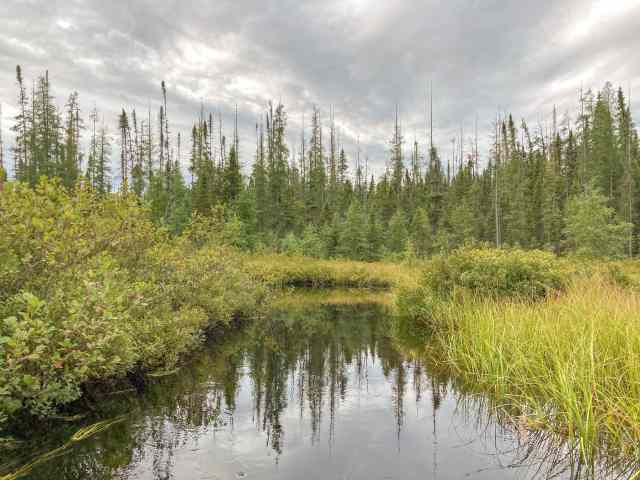 approaching the last bit of the meandering section before Florence Lake

4 Potential Portages on LE-SB  above the Florence Lake Outlet

The Chrismar map indicates 3 and the Ottertooth map shows 4  portages on the section of the south branch above the Florence River outlet.  I’ve marked the four of them on the NRC Toporama map below.  It is 1.6 km. from the top of P1 to the bottom of P4; we spent less than two hours dealing with all four; the first two we lined and ran; the last two we carried. 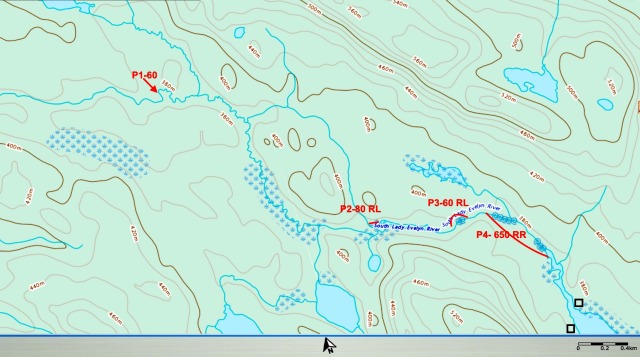 P1 is meant to avoid a short stretch with a small ledge at the top and then a large log stretching right across the river about .75 m/2.5′ above the water.  We lined down the initial stretch and paddled down to the log and were able to push the canoe under the log while stepping over it. We did not see any evidence of a portage trail at the top and we were happy to have dealt with it so quickly. Higher water in the spring would probably mean that our canoe would not have been able to be squeezed underneath that log. 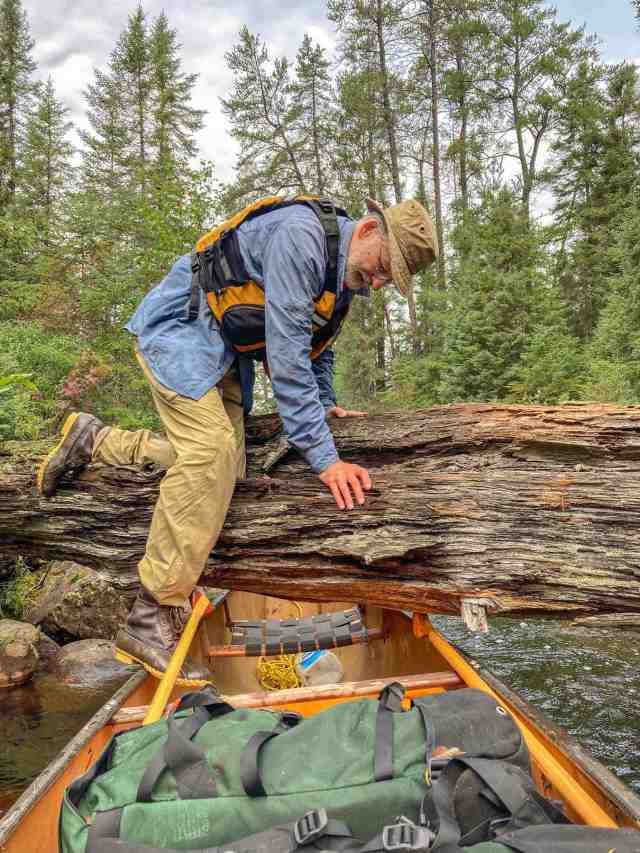 Not far from this possible portage, the Ottertooth map indicates a campsite on river left.  We did not notice it as we paddled by. Granted,  we were not looking that hard. In planning the route, this campsite had actually been one of the possible endpoints for Day 2.  Our actual progress on Day 2 clearly came short by a couple of hours! 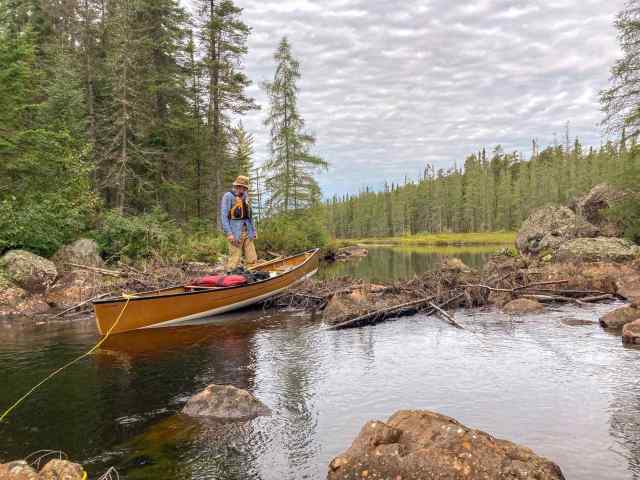 We spent a little under ten minutes lining and floating down the next 100-meter stretch of river indicated by P2. Max was starting to feel a bit weak – the onset of the 24-hour flu? – so we were glad to have been spared the carry.  As the day progressed his energy level dropped to such an extent that when we got to Florence Lake and got the tent up, he just crawled into his sleeping bag and had a long sleep until the next morning.

There he is at the start of P3, five minutes down from the end of P2. It would the first of the two portages we actually did this day.  I can’t say why it took us almost a half-hour to do! We may have stopped for a gorp and water break!  Max has a micro tape recorder to make little oral notes of what we are experiencing that we refer to later – but on this day the recorder was tucked away and his focus was just on moving forward! 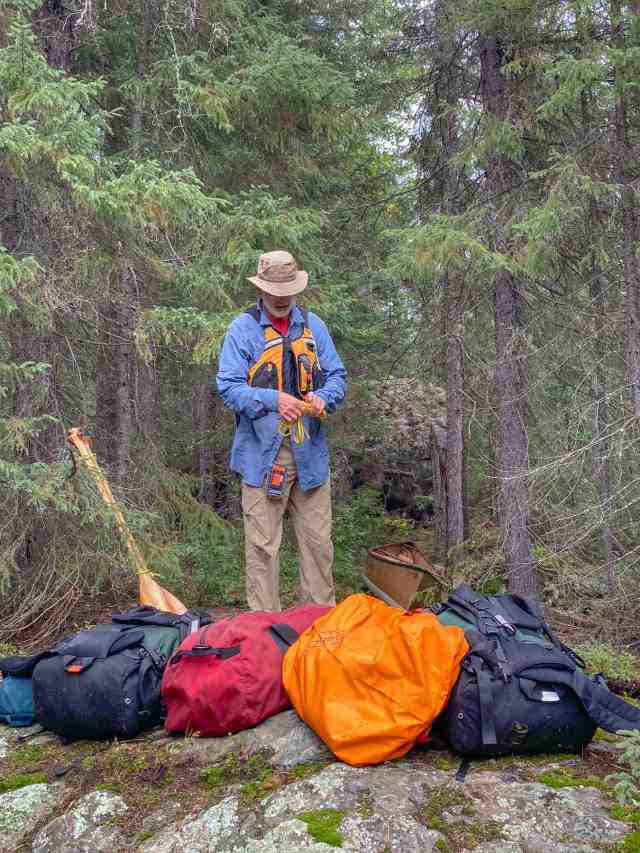 According to our GPS track, we spent about 30 minutes dealing with P3 before moving on the last – and the longest at about 600 meters – of the upper south branch’s marked portages. 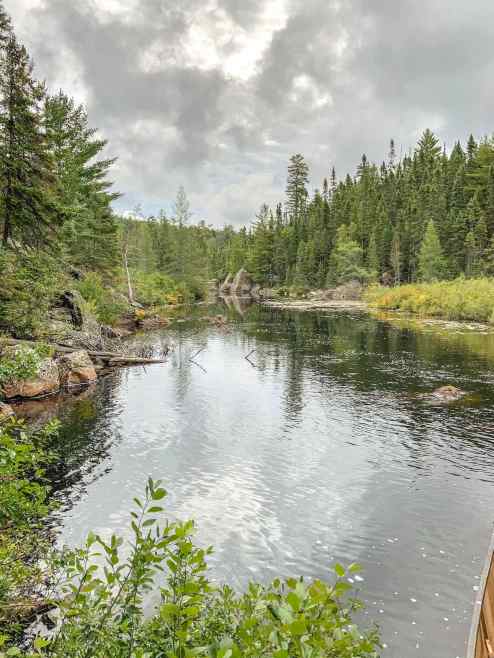 looking down the Lady Evelyn from the P3 put-in on the upper south branch – P4 comin’ up!

P4 is on river right and takes you around two different sets of rapids with a long stretch of flatwater in between. Earlier in the season, there may be an easy line and run option; we did not check it out. 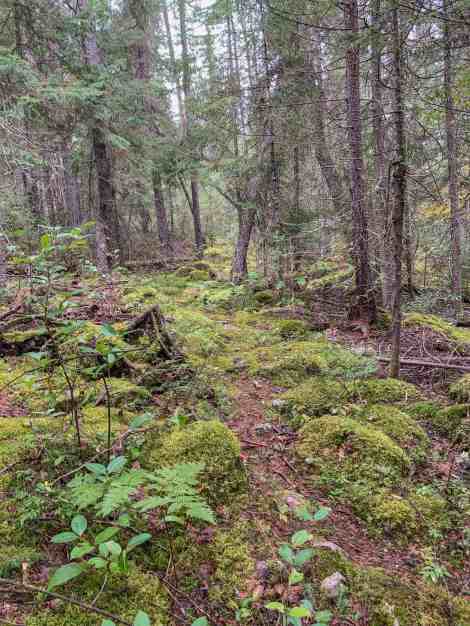 We were at the top of P4 at 11:30; an hour and a quarter later we were paddling downriver towards the mouth of the Florence River and the start of our side trip into Florence Lake. After P4 we were paddling in the widest and deepest bit of water since Apex Lake! 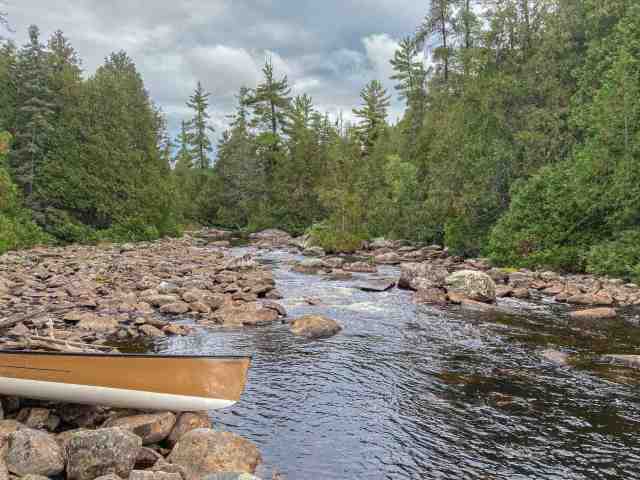 From the P4 put-in, I did walk upriver a bit to see if the boulder garden continued. That is exactly what I found. We had probably saved energy by just doing the portage instead of trying to do a line/float down a rock-strewn and very shallow stretch of water. 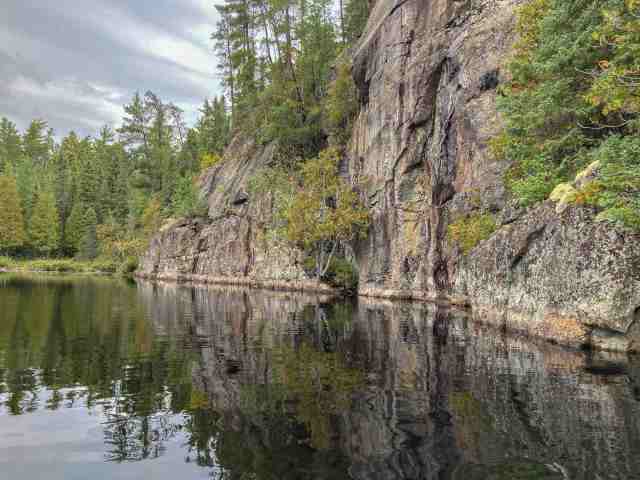 looking back at a rare stretch of rock face j1.5 km. just below P4 on river left 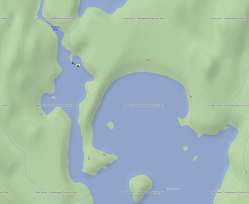 CS at the start of the Florence River

A half-hour paddle up the Florence River (no noticeable current!) and we were entering Florence Lake itself.  We did note the campsite on the point on our left as we passed by.

A couple of mornings later on our way out we checked it out more closely and decided that given the other camping options on the lake this one would rank near the bottom. The sites at the south end of the lake put you in the more scenic half of the lake.

Here are the campsite options on Florence Lake. 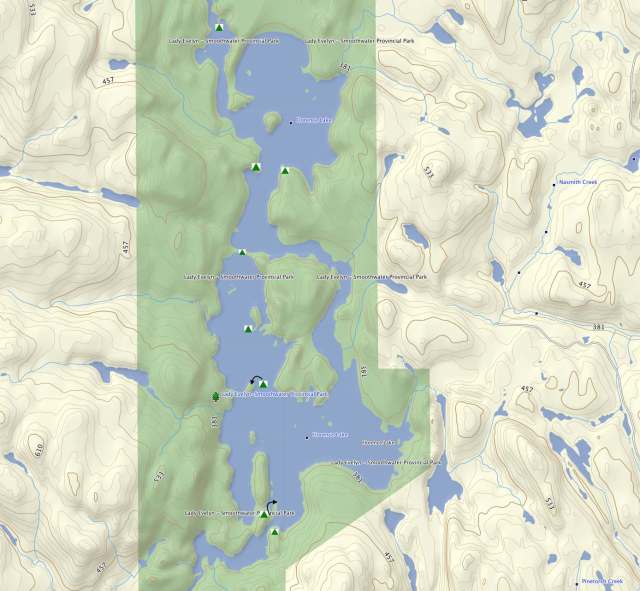 Next up was a campsite half-way up (i.e. towards the south end) the lake on the sand dam. It has a collapsed cabin on it built in the 1950s. 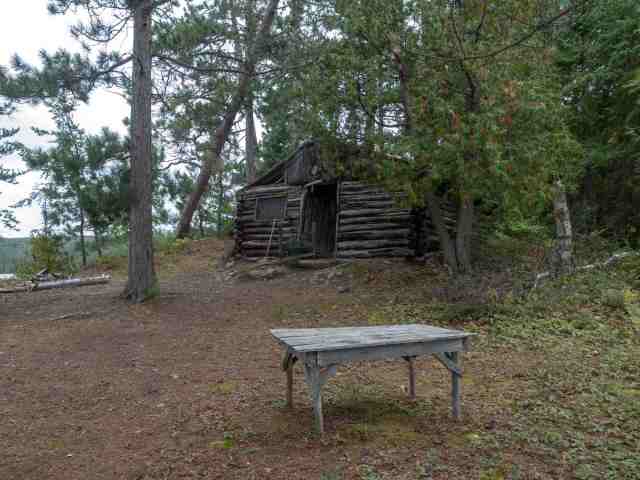 the collapsed cabin on the Florence lake sand spit

The cabin –  it has a nameplate with “Good Tent” nailed above the door – was, according to a note on the Florence Lake Ottertooth map, “built by recreationalists c. 1956”. There is room on this 30-meter wide sand dam to put up a number of tents. The cabin itself is probably beyond repair and uninhabitable. We wondered if it was the only cabin in the park other than the one at Cabin Falls now owned by Hap Wilson. 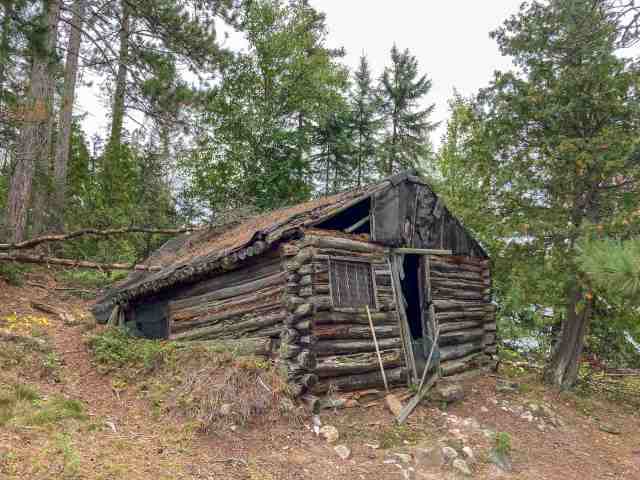 The Florence lake cabin – a view from the southeast 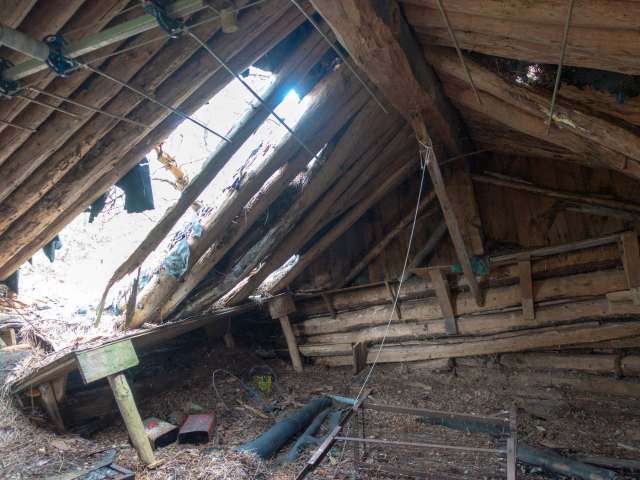 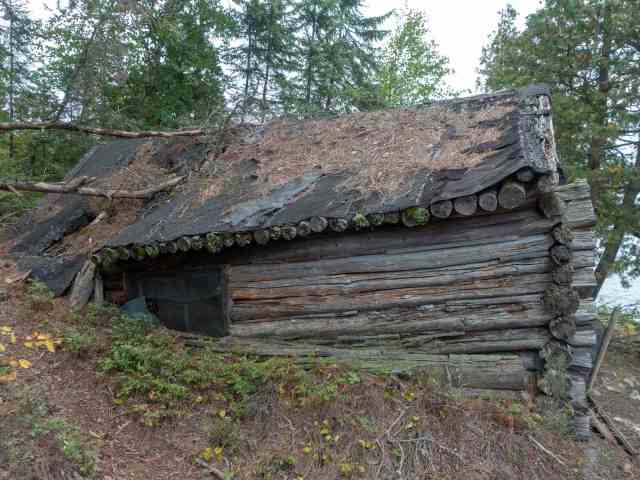 We would do the short carry to the other side of the sand dam and continue on towards the south end of the lake for a campsite on the point pictured in the satellite image below. 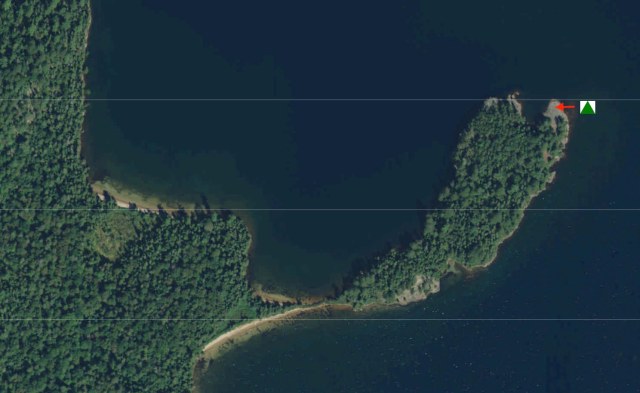 It has many of the features we look for in a good campsite – a sheltered spot to put up our 7’x8′ four-person tent, nicely spaced trees to easily set a tarp or two, an open rocky outcrop – flat or sloped – as a lounging area/patio and place to catch some wind on a buggy evening, space around the tent site to ramble around and explore. This site, like most of the other ones we stayed at,  also had a toilet box in the backwoods.

We also found this site – and all of the ones we stayed at until the one on our last night on Lady Evelyn Lake itself – to be spotless. No litter, no garbage, no mess!  Thank you, fellow canoe trippers and park staff! 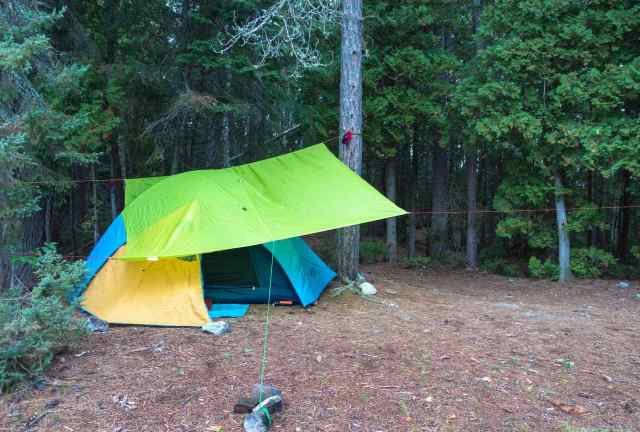 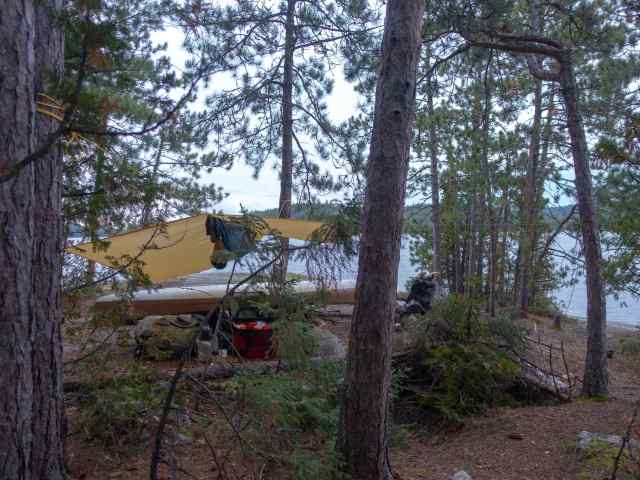 eating area closer to the water on Florence lake 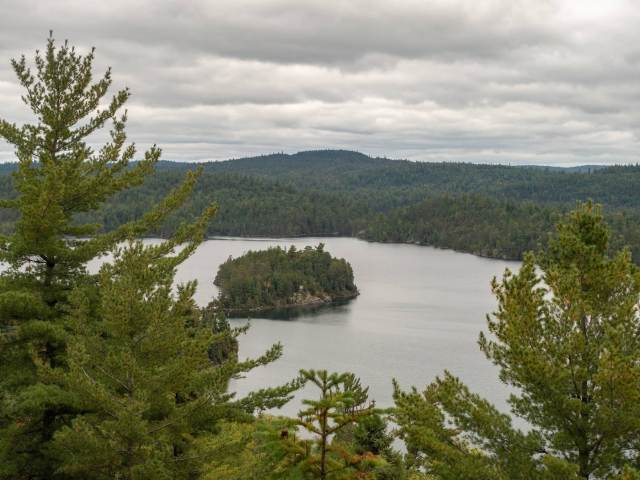 The Continuing Quest For the Blue Mushroom:

While Max slept off whatever was ailing him, I prepared a Backpacker’s Pantry (the Pad Thai is one of my favourites) for supper and went for a walk with my Sony RX100 set in macro mode. I was on a quest to find the Blue Mushroom!  While I didn’t find it, I did see all sorts of other mushrooms and fungi that I am usually in too much of a hurry to notice. It was a most enjoyable way to zen in and enter an almost meditative state. 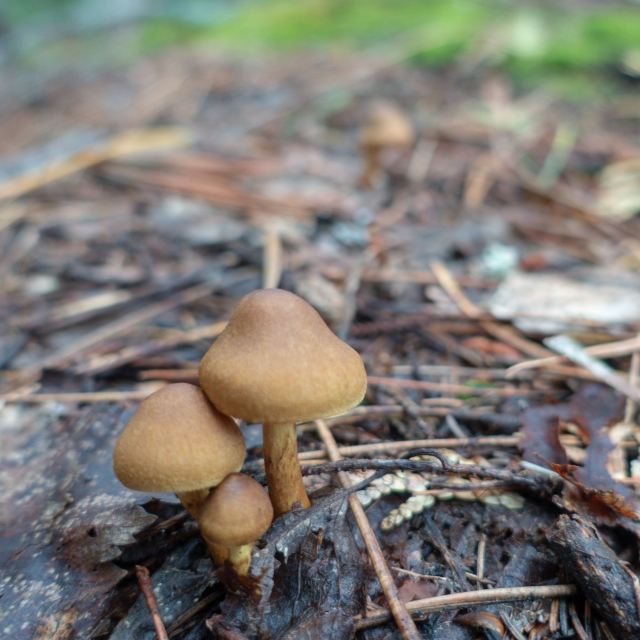 a mushroom in the wet bush behind our Florence Lake campsite 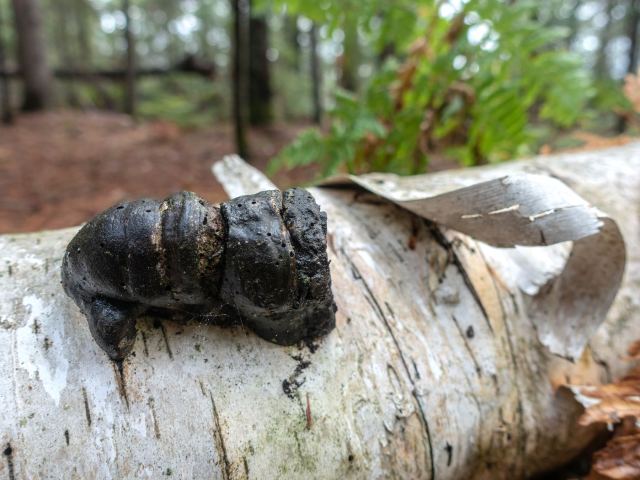 The next morning Max would be feeling better. We had another day to spend on Florence and we would be taking it easy. The only thing planned was a hike up to the Florence Mountain look-out for an elevated view of the lake and surroundings.  The next post has the pix!