Temagami’s Lady Evelyn River From Top to Bottom: Day 1 – To The Put-In And Up River To Smoothwater Lake

Previous Post: The Lady Evelyn From Top to Bottom – Intro, Route Options, Maps, Logistics, And a Bit of History

A. Getting To The Put-In:

Picking Up Our Shuttle Driver At Mowat Landing

We drove up from Toronto the day before the put-in and camped on the east shore of the Montreal River as it passes by Mowat Landing, which is where our shuttle would begin and where our trip ended eleven days later.  After the 3.5-hour ride from Toronto to North Bay on Hwy 11, we had less than two to go –

Mowat Landing is about 40 kilometers from Latchford. After you leave Hwy 11,  the first half is paved and the gravel half that follows is in decent shape. This is not the often-terrible Red Squirrel access Road down by Temagami!

Trevor and Lisa Graydon are long-time owners of the Mowat Landing Cottages; Lisa would come along to the put-in with us the next morning and then drive our vehicle back to their property. 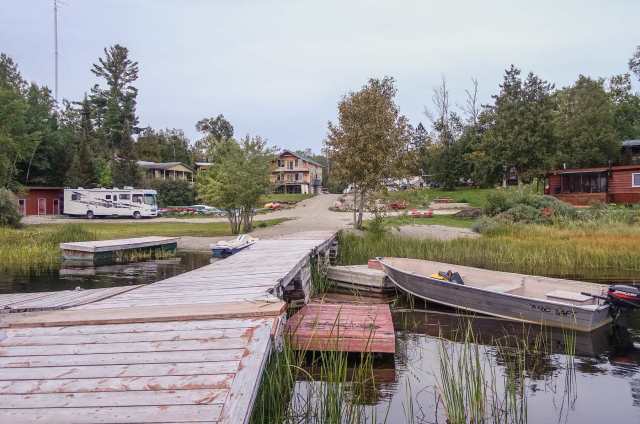 the Mowat Landing Cottages property – a view from their dock

As mentioned in the previous post, the shuttle cost was $250. + HST;  we also paid $60. for leaving our vehicle on their property and $35. for our camp spot.   We could have parked the vehicle for free on the side of the road leading to the public boat ramp; we saw dozens of vehicles there at both ends of our trip. The Graydons did say that our vehicle would be safe if left on the side of the road.

In the end, letting everyone know exactly how long you are going to be out is perhaps not the wisest thing. “Forgetting” to put a copy of your park permit on the dashboard – or leaving the vehicle on Mowat Landing Cottages property – seem like better options.

The Road To the Put-In: 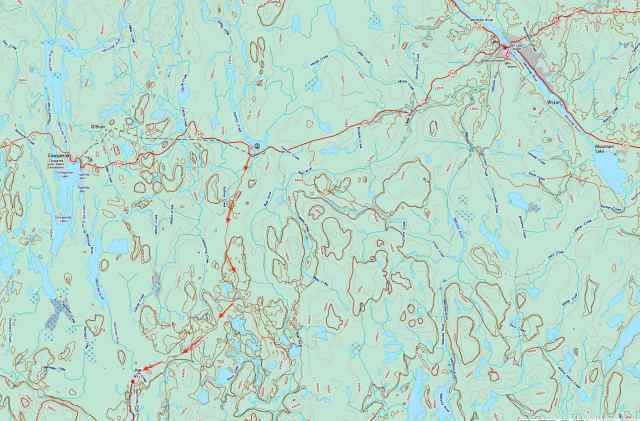 the Montreal River put in off the Beauty Lake Road

We left Mowat Landing around 8:45 and two hours later we were already paddling up the Montreal River to its headwaters.  We had taken the Bartle Lake Access Road to get to Hwy 65 which took us to Elk Lake. Then it was west on Hwy 560 and a left-hand turn onto the Beauty Lake Road after we reached Longpoint Lake. 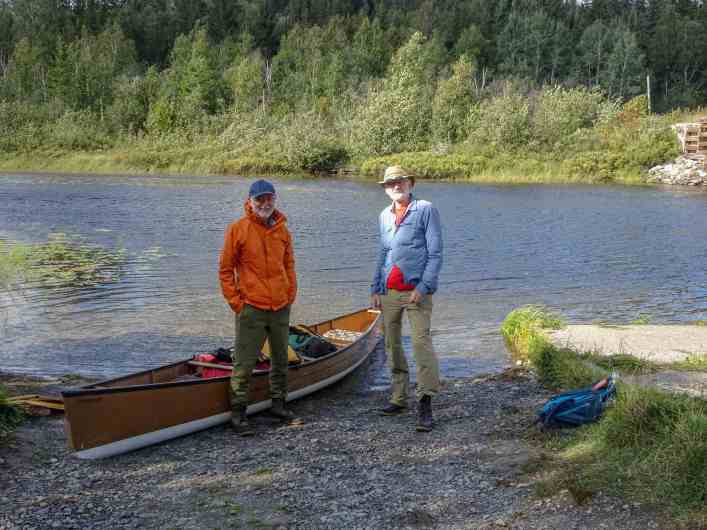 at the put-in on the Montreal River

2009 put-in point – the Hooligan and the MEC duffel are still in service!

We had been at the put-in before!  Back in 2009, we did a trip down to the Sturgeon River via Scarecrow Lake and then paddled up the Obabika River to Wawiagama Lake and on up to Maple Mountain before returning to our vehicle at the end of the Central Access Road. We put together our first canoe post after that trip – you can see the somewhat disorganized results here!

Our first day on the water was an easy one, only complicated by a strong wind from the southwest and some whitecaps.  It was overcast and coolish weather for the most part with intermittent sunshine.

On our way up the Montreal River to Smoothwater Lake, we stopped to chat with two paddlers on their way back to their vehicle at the small parking area by the bridge. They asked us to relay a message of “all good” if we passed by their three friends who were a bit behind.

Looking back at the Montreal River bridge and put-in

When we got to Smoothwater Lake, we first headed to a campsite on the west side of the lake. Unimpressed, we looked for the other one nearby but not finding it (it was one bay further south than we thought!), we decided to paddle over to the beach area on the east side of the lake. Campers were already at the site we had stayed at a decade ago so we landed a bit further south and looked for a possible site. Not finding anything suitable, we paddled south along the shore to the start of the portage to Marina Lake.

We found there a great campsite – the #1 site on the lake! – with more possibilities than the sites further up:

It is always nice to have a site where you can ramble around a bit! We were home for the night. 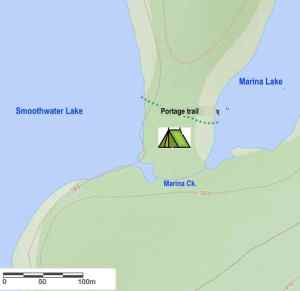 We only found out later that not only had we landed at an excellent campsite but that it also is in the archaeological records thanks to work done by John Pollack in the early 1970s.  He was working on his M.A. in Anthropology at McMaster U at the time and the Smoothwater site (Borden # CiHd-1)  was one of a number he examined for his 1975 paper entitled The Culture History of Kirkland Lake District, Northeastern Ontario. [Click on the title to access the paper.]

He dated the use of the site back to the late Shield Archaic cultural period around 1000 B.C.E.  Uncovered were all sorts of stone artifacts as well as possible evidence of a 10′ x 12′ tent ring structure with a central hearth.  See here for a 9.7 Mb pdf file of the Smoothwater section of his technical paper; it includes images of many of the stone implements uncovered – scrapers, projectiles, and choppers among them. Also found were three fragments of pottery that Pollock assigned to the Laurel Complex culture period (300 B.C.-800 A.D.).

Knowing the significance of the site only makes it more special to have spent the late afternoon and night at the spot where the creek from Marina Lake comes trickling down into Smoothwater.  To the Anishinaabeg of old who later made the region their homeland, the lake also figured in one of their main mythic narratives.

Marina Lake from the portage trail from Smoothwater Lake

The Garmin inReach Comes In Handy:

After an early supper, we walked north along the shore to where the other campers were.  It turned out that they were the friends of the two paddlers we had met downriver from Smoothwater Lake earlier that afternoon so we passed on their message.

We also found out why they were so far behind – the waves on Smoothwater had been bad enough that they had capsized their canoe. The three of them had decided to stop, dry out, and wait for better weather the next morning.  I made use of our inReach Explorer+ to send their two buddies an email to let them know what had happened and that their three friends would join them the next morning.

Smoothwater Lake looking west from the east side beach

As we stood on the shore of Smoothwater and looked west at the awe-inducing light show,  my thoughts turned to the Anishinaabe trickster/culture hero Nanabush (aka Nanabozho, Nenebuc, etc.). In 1913 the American anthropologist F.G. Speck spent two weeks with the Ojibwe locals living on Bear Island near the Hudson Bay Co. post. From the second chief Alec Paul, whose immediate ancestors were associated with the Mattagami people to the north of Smoothwater lake, he would learn that this beach was the setting of mythic events.

Here is what Speck recorded –

He (Nanabush) had his bow and arrow with him, and as he went along he saw a great snake.He shot it with his arrow. He came to a big lake with a nice, sandy shore, where he saw Lions (mici”bi- zi’w “giant lynx”). He couldn’t shoot them with his arrow as they were too far away, nor was there any place where he could hide himself until they came to sun themselves by the shore when they felt too cold in the water. Finally, he hit upon a plan. He took some birch bark from a rotten stump, rolled it into a hollow cylinder, and placed it, like a wigwam, near the shore. He got inside and made a little hole in the bark through which to shoot and kill the Lions.

This big snake referred to in the first sentence would become a part of the high rocky Ishpatina ridge on the portage to the south of Smoothwater Lake. The “nice, sandy shore” was the one we were standing on!

As for the Lions – a more accurate translation would be Great Lynx, known in Anishinaabe mythology as the underwater being Mishipeshu (click on his name to read a bit more about him!). In this account, there seems to be a family of lynxes. A flight of fantasy had me thinking that maybe the fire pit in the image above was where Nanabush’s hollow cylinder had stood!  The story continues –

When the Lions saw the thing on the beach, they grew curious to find out what this strange thing was on the beach that was not there the day before. So they sent a big snake to twist around it and to try to upset it, but the snake did not succeed in doing this, for Nenebuc (i.e. Nanabush) stood too firm. So the Lions came ashore upon the sand and Nenebuc shot one of them with his arrow a she-lion, the wife of the Lion chief. He did not kill her, but wounded her badly in the side, and the flint arrow point stayed in the wound. She was very badly wounded and went back to a hole which led to a cave in a big rock where she lived. Nenebuc was sorry that he had not killed the Lion queen.

That cave was, according to Speck’s footnote, “in a high bluff on the west shore of Smoothwater Lake”.  The image above includes that western shore.   We would begin Day Two with a search for a rock feature that might be associated with that cave.

Click on the cover above – or the title below –  to download the entire Speck booklet. Pp. 34-36 have the Nanabush-Mishipeshu Smoothwater story.

Myths and Folk-lore of the Timiskaming Algonquin and Timagami Ojibwa by F.G. Speck 1915 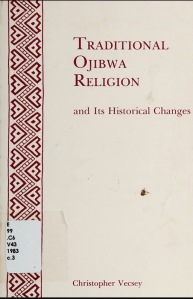 The Nanabush story is perhaps the essential Ojibwe myth and was told from one end of the Ojibwe world to the other, from southern Ontario and Temagami to Minnesota. Needless to say, there were many variations of the myth to fit particular local settings and individual storytellers or audiences. Christopher Vecsey has summarized the basic story, highlighting eight key episodes that most versions share.  You can read his useful account here –

The Myth of Nanabush – The Eight Key Episodes Of His Life (C. Vecsey)

Day 2 would also involve a couple of 700-meter + portages to get into the narrow and shallow beginnings of the Lady Evelyn River.  It would end with a makeshift campsite on the south branch of the Lady Evelyn River after a half-day of dealing with beaver dams, submerged logs, deadfall and deep mud. We can’t say we didn’t know what was coming! It is the late-season entry fee for a trip down an epic little river!

Next Post: Day 2 – From Smoothwater Lake to An “It’ll Do” Campsite on the Lady Evelyn’s South Branch

2 Responses to Temagami’s Lady Evelyn River From Top to Bottom: Day 1 – To The Put-In And Up River To Smoothwater Lake