Robert Bell’s Lady Dufferin Lake: It’s Not Where The Map Says It Is!

Related Post: Temagami’s Lady Evelyn of the Lake – Who Was She? 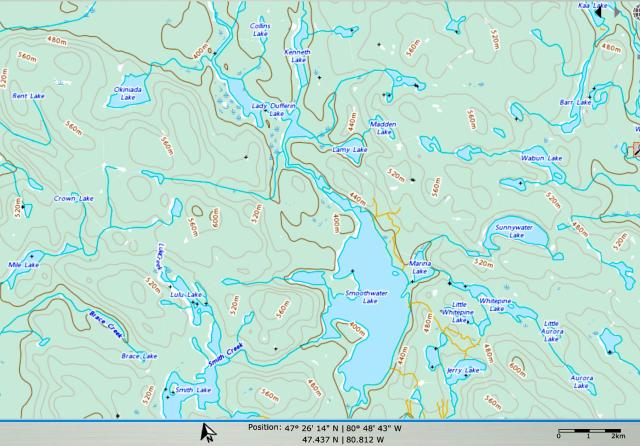 I’ve paddled up the east branch of the Montreal River to its headwater lake, Smoothwater,  a couple of times. Before you get to it, you go through another lake named  Lady Dufferin.   Each time, I’ve wondered what the Lady would have thought had she seen the inconsequential, marsh-lined and not terribly scenic widening of the river that someone decided her name should grace.

It is actually not the lake that he had given the name to, as I would find out! The much more significant and scenic lake that he named Lady Dufferin was about twenty kilometres downriver!

Robert Bell of the Geological Survey of Canada: 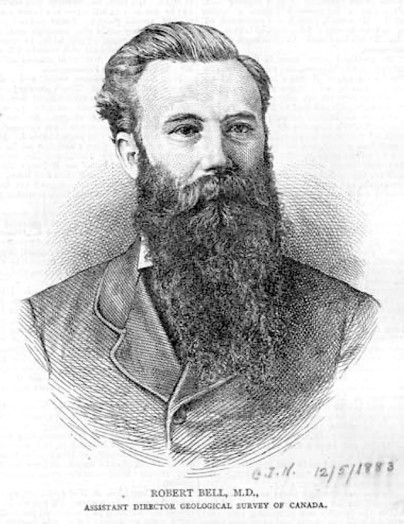 The someone who did the naming was Robert Bell (1841-1917) of the Geological Survey of Canada, a department of the Canadian Government tasked with mapping the lakes and rivers – and cataloguing the mineral, agricultural, and timber wealth – of the Canadian Shield. He was one of the greatest of Canada’s greatest explorers and is credited with naming over 3000 geographical features in that part of Canada which he helped open up through his reports. 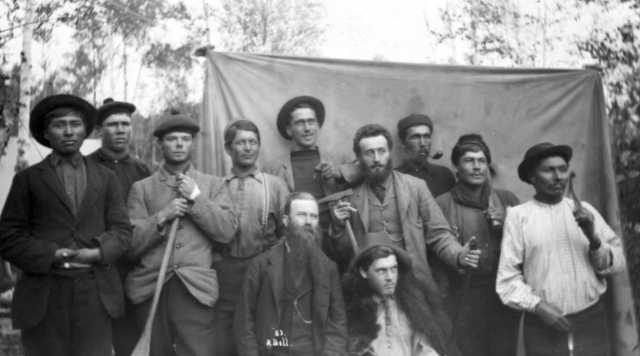 The report he submitted on the 1875 season detailed the terrain he and his crew paddled and portaged from Lake Huron to Wanapitei Lake and then up the Sturgeon, down the Montreal’s east branch, over to the Mattagami River, and down to James Bay before heading back to Michipicoten on Lake Superior via the Missinaibi River.  Quite the trip!

In the report, he mentions that he named a lake on the east branch of the Montreal River after Lady Dufferin. 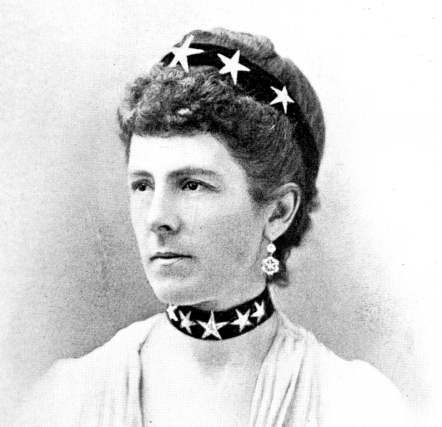 Why Name A Lake After Lady Dufferin?

From 1872 to 1878, the just-created Dominion of Canada’s  Governor-General was Lord Dufferin. Bell had enough status in Ottawa society that he would have met the G-G and his wife at Ottawa gatherings or at their official residence, Rideau Hall. The Wiki bio linked above includes this observation –

Lady Dufferin was one of the most popular of the governor-generals’ wives, and was starting to build up her reputation as “the most effective diplomatic wife of her generation”.

Naming a lake after her may have been based on a personal connection to the G-G and his wife and an honour to be accorded to someone of her status. Here is what Bell had to say a few years before in his 1870 Report on Lake Nipigon:

Even though Bell often stuck with the local – i.e. Anishinaabe –  language names for places, he did on occasion reach into the name bag of Empire! As with Lady Evelyn for another lake in the area that he named after another G-G’s eldest daughter, this was one of those times.

But back to my initial point –  was this really the best lake that Bell could choose to put her name on in his summer travels?  I turned to the 1875 Report hoping to find a direct quote about his naming the lake.   What I found was initially confusing;  it did not fit the names found at the headwaters of the east branch of the Montreal River!   Here is what he wrote:

The first bit of confusion was the name White Beaver Lake, which he uses instead of the one we use now – i.e. Smoothwater. The lake, he writes, is reached after traversing a series of ten lakes and ponds from the Sturgeon River. These ten stretch from Hamlow Lake by the Sturgeon River up to Apex Lake just south of Smoothwater.

Smoothwater is the English translation of the Ojibwe Zhooshkwaa (smooth) + agamiing (lake). On some maps it appears as Shusawagaming. Given the role the lake supposedly plays in the local version of Nanabush and the Flood Story, it does seem odd that its mythic significance is not acknowledged in some way in its name.

Bell’s dimensions and description for White Beaver fit exactly with Smoothwater Lake.  His name for the lake was probably the English translation of a name (Wabaamik?) he got from someone local.  It was not the one that eventually ended up on the map for some reason.

He writes that it is “fifteen or sixteen miles, in a straight line” to Lady Dufferin Lake from White Beaver Lake. He is clearly not describing the lake we know as Lady Dufferin Lake less than two kilometres below (i.e. to the north of) Smoothwater Lake! 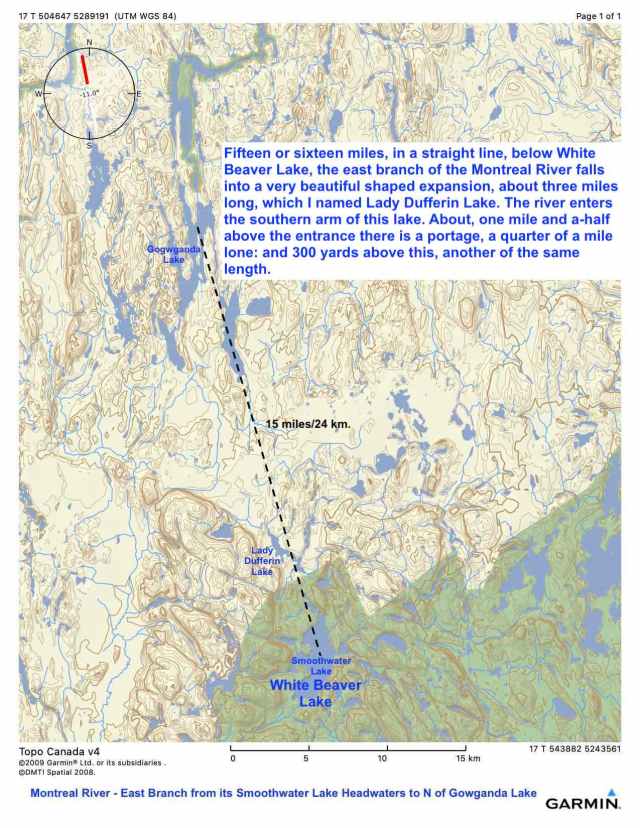 Fifteen miles from Bell’s White Beaver Lake puts us right in Gowganda Lake. Again,  as with White Beaver (i.e.Smoothwater), the particulars of the lake fit perfectly with Bell’s description.  He notes the portages to enter the lake, and of the outlet, he writes –

The three lakes (Burk, Edith, and Obushkong) and the branch – a bay stretching NW to Kawakanika Lake – are on the map. 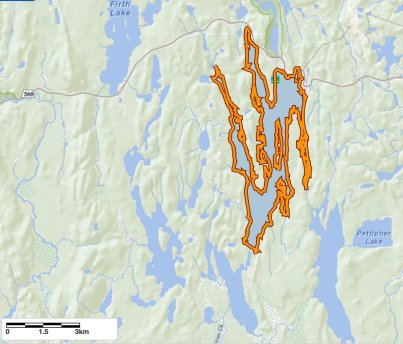 Someone in the Mapping Department in Ottawa screwed up and attached Lady Dufferin’s name to the wrong spot on the map.  Instead of that “beautiful-shaped expansion” of the river 25 kilometers north of Smoothwater Lake, it is that non-descript “lake” just 2 kilometres downriver.

Now that I know Bell’s intent, the next time I paddle up to Smoothwater, I won’t be wondering how naming this short section of the river after someone would be considered an honour! 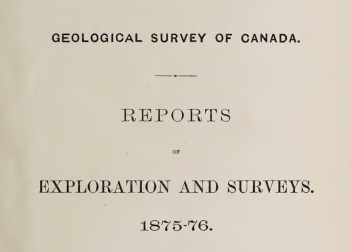 A copy of the Bell Report can be found in this 48.5 Mb pdf file:

Geological Survey of Canada Reports of Exploration and Surveys 1875-1876.pdf

The reference to Lady Dufferin Lake is on p.299.

If you’d like to paddle up to Smoothwater lake from the Beauty Lake Road put-in, click on the title below to access the map from the Ottertooth website’s Temagami Canoe Atlas Series:

From Smoothwater, you have a few possible route options.  Two include:

This entry was posted in Temagami, wilderness canoe tripping. Bookmark the permalink.