We set off at 7:00 for our first full day of walking. After a steep climb up to the road on the east side of the river, we walked for a bit and then turned around to view the Kali Gandaki as it flows southward. Nilgiri North (7061) and Tilicho Peak (7134), along with Nilgiri Central (6940), are to the east and make for a stunning early morning view.

panorama shot of Kagbeni from the north

Still clearly identifiable is the gompa with its gold-coloured top. The green fields that surround the village make clear what its prosperity is based on.

looking back to Kagbeni from the road to the north

As we walked up the road – and occasionally a side trail that avoids the road – we looked across the river to Tiri, the last village (gaon) trekkers can walk to without that $500. permit. If nothing else, it would give visitors another view of Kagbeni.

By vehicle, it is possible to cover the 88 kilometers from Jomsom to Lo Manthang in a day. Given the amount of road work we would see during the four days spent on the walk to Charang, the district is undergoing a dramatic change that will significantly change its character.

Not far away is Kora La, the lowest of the four border passes from Tibet indicated on the map below. The Chinese road to the 4660-meter-high pass is already complete. A major truck container port facility is planned for the Nepalese side of the pass.

Within the next decade, the Mustang road from Kora La to Jomsom and down to Beni will become one of four major supply routes from Tibet. By then, all the travel brochure talk about it being “the last of the forbidden kingdoms” with its exotic Tibetan Buddhist culture will finally be put to rest.

Instead of the backwater it became when the Chinese sealed the border in the early 1960s,  it will perhaps be what it once was in its heyday four hundred years ago – an important trans-Himalayan trade route. It was control of that trade route which paid for the palaces and gompas of the once Kingdom of Lo. I am sure the locals – the 6000 – 7000  that are left – are hoping that the road will also bring economic opportunity for them as the district is flooded with Chinese goods. What it won’t be getting are more trekkers. Like the Annapurna Circuit, the road development in upper Mustang will destroy much of what attracts 2000 to 3000 annual visitors.

One thing the completed and upgraded road won’t do is take away from the stunning views.

for anyone interested in geology, archaeology, or Tibetan Buddhist culture, a trip up the Kali Gandaki from Kagbeni will never get old! 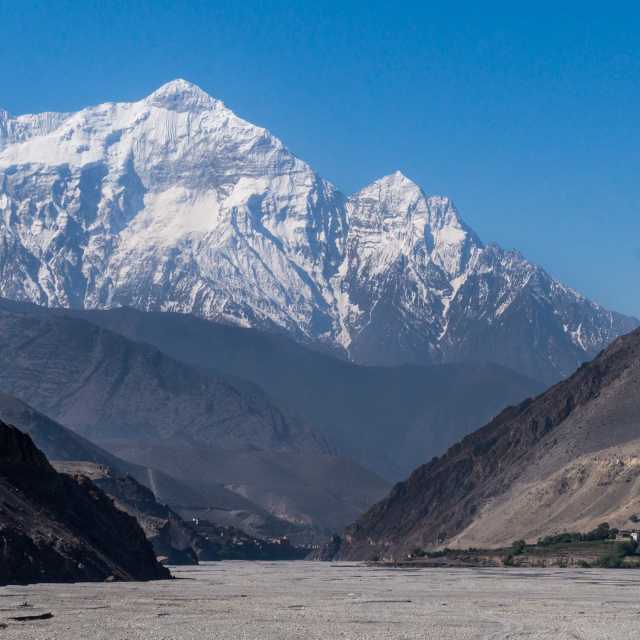 one last look back at Kagbeni and the monastery

The vehicle traffic was thankfully light as we walked up the road. Given how dry everything was, those made-in-India Mahindra Bolero SUVs can stir up quite the dust storm as they pass by. The Tangbe Apple Farm looked far from being a reality, its derelict front a reflection of the few young trees struggling to root themselves in the sand.

the front gate of the Tangbe Apple Farm

Tangbe itself is to the north of the apple “orchard.” We did not enter the village but followed the road as it skirts the settlement. Busy at work in the vicinity was a road construction crew of about twenty with some substantial earth-moving machinery at its disposal. 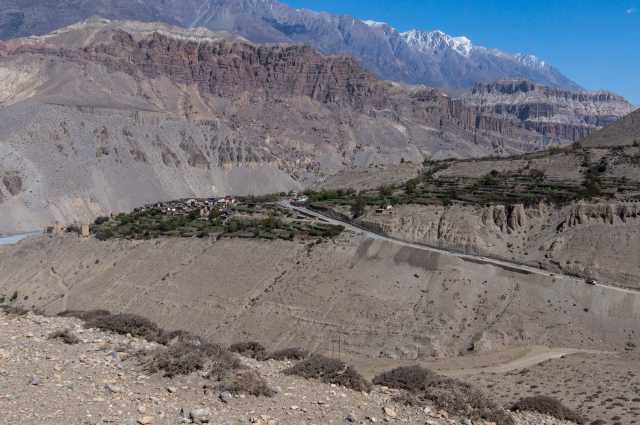 the road as it nears Tangbe village

North of Tangbe, another stretch of green fields borders the Kali Gandaki with apple orchards and barley and buckwheat fields.

A splash of green farmland north of Tangbe

A bit to the north of Tangbe was our lunchtime destination – Chhuksang. It is the thin sliver of green you see the dead center in the image below. You can also see the road we walked along to get there.

walkers on the road to Chhuksang from Tangbe

chortens on the road near Chhuksang in upper Mustang 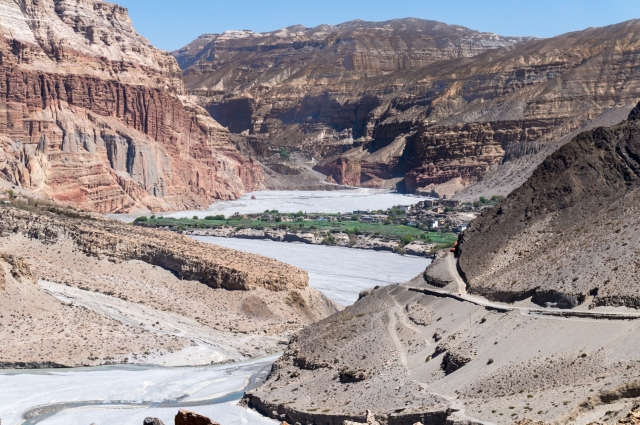 The Bhrikuti Guest House was our lunch stop on this day. We used their dining hall; our cook crew prepared the lunch below using some of the guesthouse’s facilities. While we waited, I walked up and down some of the village’s alleyways.

Chhuksang is said to be one of the five villages in the area – the others are Chele, Ghyakar, Tangbe and Tetang – where the Gurung culture is dominant.

On the other hand, the ram’s horns and skull are talismans common in Tibetan folk culture; they are often placed above doorways to ward off evil spirits. I was surprised to find a few examples as I walked around this supposedly Gurung settlement. It may just be one of those customs shared by several cultural groups.

skulls above a passageway in Chhuksang

ram skull above a Chhuksang doorway

more sheep skulls above a door in Chhuksang 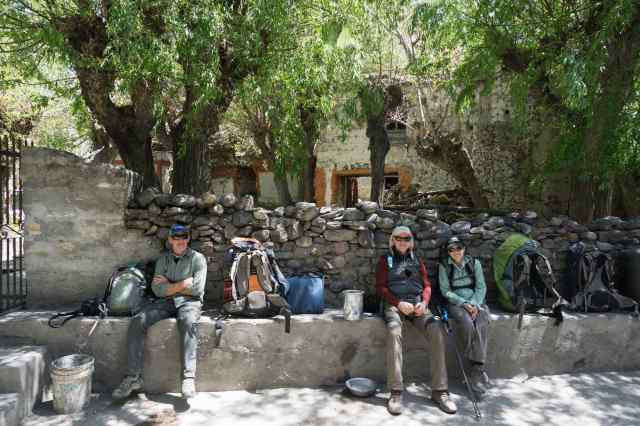 fellow trekkers – the three Aussies – chillin’ after our Chhuksang lunch

trucks loading up with gravel from the river bed by Chhuksang

Chhuksang – the Hotel Alice, an ancient dzong (i.e. fort)  above, and our guesthouse in the trees

After lunch, we walked across the dry Narsin Khola riverbed and continued to Chele. The photo above was taken from the north side of the Narsin and captures most of Chhuksang. The map below shows the reasonably flat route towards Chele (Chaile) and the bridge across the river to get there.

Along the way, yet more examples of “sky caves,” both on the west side of the river and in the cliff face on the east side above the bridge that took us over to the beginning of a steep climb up to Chele on the plateau. Halfway over the bridge, we looked into the tunnel the river had carved out of the sandstone.

North of this point, the Kali Gandaki loses its wide floodplains look and becomes more narrow. The road to Tsarang and Lo Manthang leaves the river at this point and climbs up to Chele and then over a series of a half-dozen passes and up, down, and across a few side valleys.

More cliff caves on our walk from Chhuksang to Chele

early afternoon on the road to Chele from Chhuksang – no shade!

Our Chele base – the Bishal Guesthouse

We got to Chele (also spelled Chaile, Tsaile, and  Tsele on various maps) around 2:00 p.m. Given the lack of shade during most of the walk up the valley, getting out of the sun is not a bad idea! The wind also picks up as the day progresses, so the more kilometers you can do in the morning, the better.

our Chele tent site behind the Bishal Guesthouse 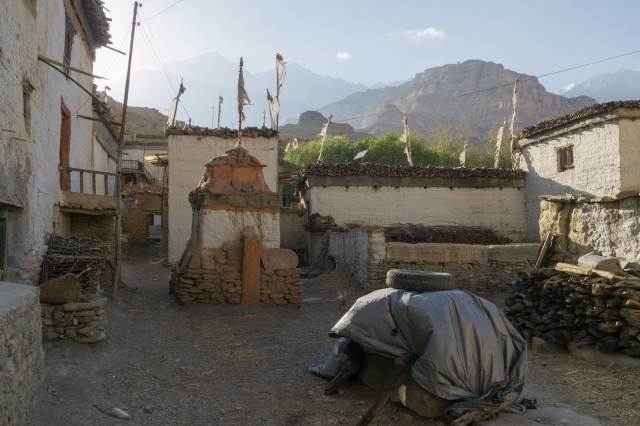 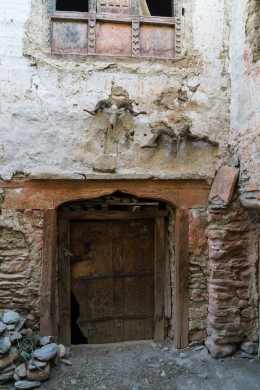 While a few jeeps passed us by during the day, we had yet to meet other trekkers.

The one thing that was going on during our four-day walk up to Charang was the 2018 edition of the Mustang Trail Race, an eight-stage race that took the twenty participants up to Lo Manthang from Kagbeni in three days with stops in Chele and Ghami (also spelled Ghemi) on the way there. After a day off, the runners returned to Kagbeni over another five stages. [The entry fee was a whopping US$3450  per person, which included the $500. entry permit plus flights from Kathmandu and full room and board for eight days – but still!]

They had left Kagbeni shortly after us on April 17. We would see the occasional strip of orange trail marking tape the next couple of days as a reminder that they had also been this way – just a bit faster than us! The shortest time was posted by Sherpa Chhechee, who completed the 166-kilometer route in just under 22 hours.

In the late afternoon, I walked back to the east side of Chele and, from my rooftop vantage point, got a nice shot of the river down to Chhuksang with the Annapurna peaks yet further to the south. 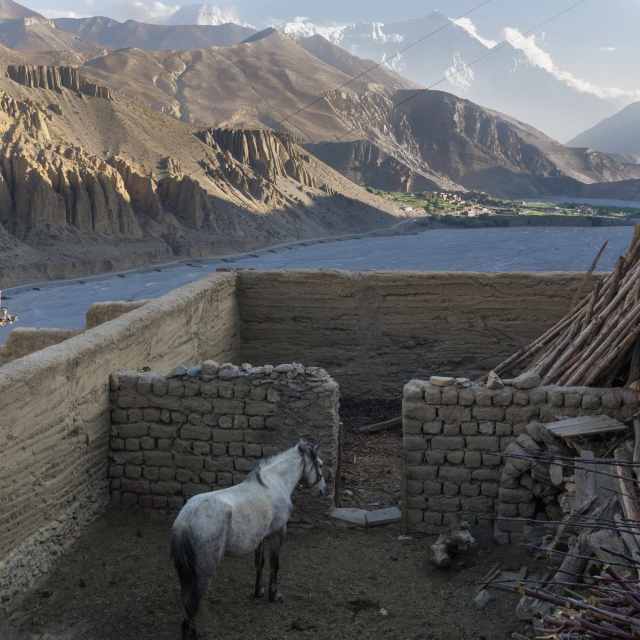 looking down to Chhusang from a Chele rooftop