Cycling Around Tasmania: Day 2 – From Richmond to Triabunna 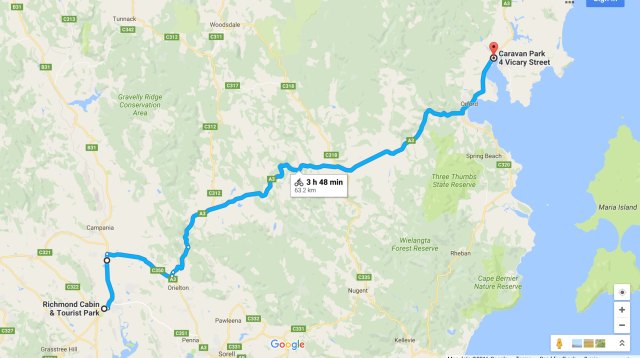 Click here to zoom in or out of the Google interactive map.

Leaving the  Caravan Park around 8,  I rolled down Richmond’s main street and stopped at the one open gas station and bought a bottle of sugar water for the ride.  In my brief chat with the attendant I learned that the Prossers Road that I was headed for was not the best choice; he recommended the somewhat longer but paved B31 to C350 (Fingerpost Road)  and then along C350 to the junction with the Tasman Highway (A3).  So that is what I did.  The pix below show the relatively flat terrain for at least the first hour of the day’s ride.

the road not taken – Prossers Road – on the advice of the gas station guy!

looking east down C350 near Campania 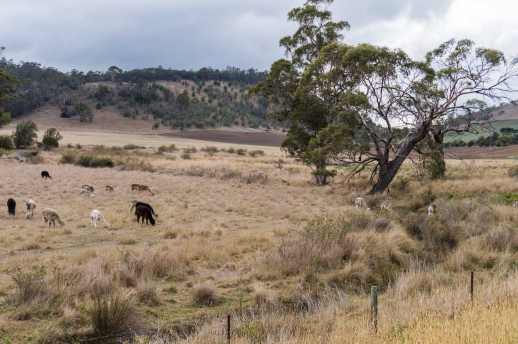 I got to Buckland for lunch, having done what would turn out to be the two biggest climbs of my east coast ride to St. Helens. From the top of Bust-Me_Gall Hill, it was a rewarding downhill roll to the Buckland Roadhouse and a veggie burger and fries.  As the pix make clear there is not a lot of paved shoulder for a cyclist to claim as his own.  However, I saw maybe a dozen cars until I hit the A3.  I pretty much had these secondary roads to myself while the nearby A3 – the main highway – was undoubtedly much busier.

After lunch, I continued on the A3, known as the Tasman Highway.  It serves as the alternative coastal route between Hobart and Launceston, the state’s two biggest towns.  Finally, as I approached Orford, I got to see some major water!

Orford sits on Prosser Bay. As I stood there and looked east beyond the bay across the Tasman Sea,  I imagined New Zealand’s South Island, specifically the West Coast highway I had cycled down a couple of years ago.

1800 kilometers or more separate the two coasts but as raw and wild as N.Z.’s West Coast is, Tassie’s east coast would prove to be tame and gentle. [Click here to access my  N.Z. “Down The West Coast” post.] 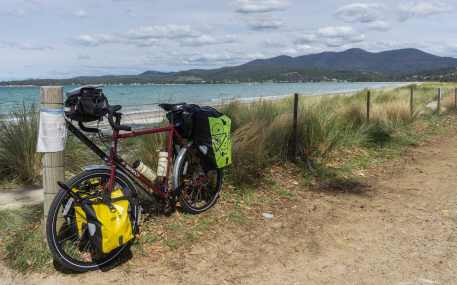 my bike on the side of A3 at Prosser Bay

my first beach shot on Tasmania’s east coast near Orford

view from the side of A3 at Prosser Bay

My introduction to the beaches of the east coast would be short. From Orford, the road cuts inland across a small peninsula before running along the west shore of Spring Bay to my target for the day – Triabunna (population: 800). Given the dependably mild east coast weather and the scenery, it is a popular tourist destination as well as a retirement community. Triabunna harbour serves as the home dock for a small fishing fleet as well as the departure point for the ferry over to Maria (Mah-rye-ah) Island, a national park and nature sanctuary.

Just off of the A3 is the Triabunna Cabin and Caravan Park. I would make myself at home under the tree you see in the photo below.  My fairly lightweight Kelty Zen tent up and my gear put inside, I went for a walk down the two blocks that make up the main street. At the local IGA (a grocery store chain) I got some fresh fruit, bread, and other consumables 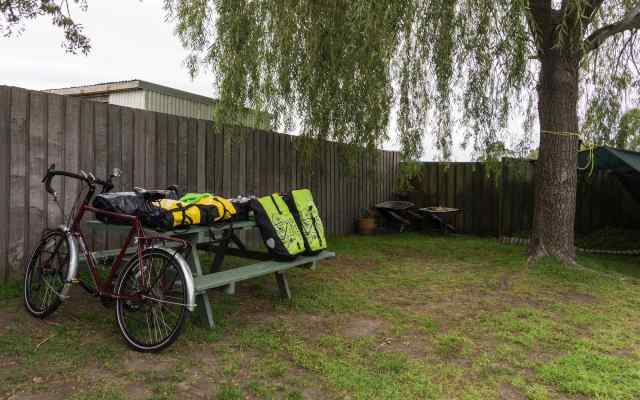 my tent spot at the Triabunna Cabin and Caravan Park

A couple of hours later a solo motorcyclist pulled up and set up a hammock and tarp next to me.  He was from Melbourne and was on a one-week ramble in Tasmania and was headed over to Maria Island the next morning – without his bike, which he would leave at the Caravan Park.  We wandered down to the Fish Van; he oohed and aahed about the fried fish while I made do with an order of fries! It was slim pickings for someone intent on being vegan in a fishing town!

warehouses by the Maria Island ferry stop at Triabunna

looking north down Spring Bay from the Triabunna Ferry landing

With more time – or without the commitments I had created by pre-booking my accommodation in a few of the upcoming towns – a visit to Maria island would certainly have been worth it.  Here is the enticing write-up in the Lonely Planet guide-book I had with me –

“Maria is laced with impressive scenery: curious cliffs, fern-draped forests, squeaky-sand beaches and azure seas. Forester kangaroos, wombats and wallabies wander around; grey-plumed Cape Barren geese honk about on the grasslands; and an insurance population of Tasmanian devils has been released and is thriving. Below the water there’s also lots to see, with good snorkelling and diving in the clear, shallow marine reserve.”

Sounds pretty neat, eh!   There is camping available on the island and bicycles (“push bikes”) are allowed. It looks like an enchanting spot to explore for a couple of days. Maria Island is just one of perhaps a half-dozen parks and nature preserves along Tasmania’s east coast around which you could fashion a fantastic two or three-week retreat. With your own tent and gear, you’d be all set.  If you didn’t have a bike at the ready, the bus connections from town to town are adequate so there would be no need to rent your own vehicle.   It would only sit around unused most of the time!  Maybe there is another visit to Tasmania forming in my mind!

Instead, my next day to Swansea on the A3 would be a mix of coastal scenery, ending with a nice ride from the Rocky Hills to my room for the night at the Swansea Backpackers Hostel,  getting there just in time to beat the first rainstorm of the trip. See the details in the next post!