It was an unusually warm and sunny November day here in Toronto. Temperatures reached 20º C  by early afternoon.  Deciding to play tourist in my own  town,  I grabbed my camera and ultra wide-angle lens and hopped on the streetcar. The first destination – the north end of Nassau Street in the Kensington Market area.  The plan was to spend the morning rambling through Kensington and then find my way to what I had only known as Rick Mercer’s alleyway in his CBC TV program The Mercer Report until a Google search turned up how to get there.  What I wanted to focus on was the street art that both areas are famous for. 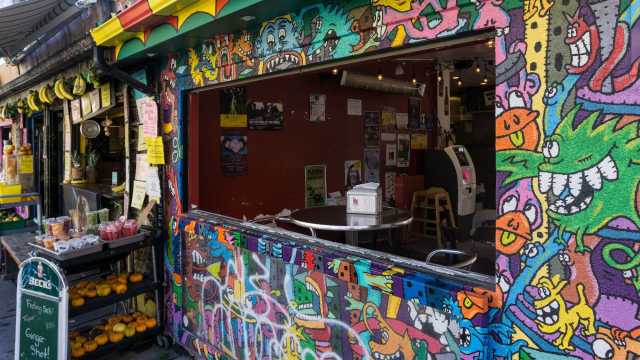 My stroll through Kensington Market bought  back memories of the  Sixties’ counter culture of my youth. Head shops, incense shops, Tibetan and Indian handicraft stores, vegetarian restaurants…in spite of the changes, the area has kept its bohemian vibe. However, I’d be hard pressed to explain how the street art I found reflected this.

Almost always striking are the colour combinations that the graffiti writers and painters use. Sometimes the original artists’ intent is lost in the later additions made by other taggers.

Kensington – meaning unclear and perhaps not a relevant concern

I had the feeling early on that the artists were working with a different vocabulary and set of cultural symbols than I was familiar with and I often had no idea what the intended message was – or even if the concept of  “message” was an approximate entry point. 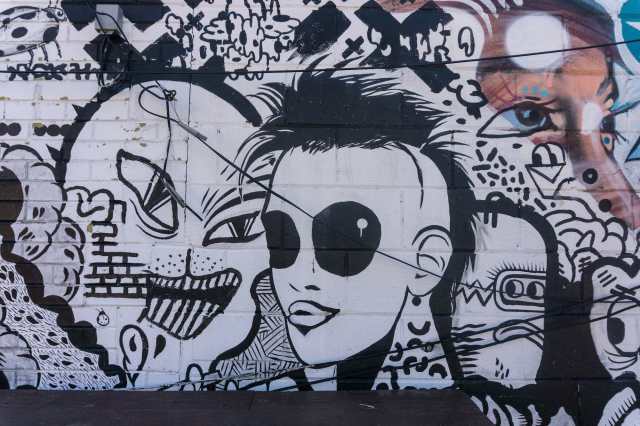 Cool dude and other faces

As I wandered around and wondered about the meaning of what I was seeing, the Alex Garland novel The Beach came to mind.  Reading it in the late 1990’s,  I had been struck by the absence of any  allusions to the classic icons and symbols from the repository of western civilization.  In its place,  the writer draws from an image bank of video game sub-culture and tv programs like The Simpsons.

Well, I had the same experience as I stood in front of the various panels of spray-painted imagery.

graffiti in the service of commerce 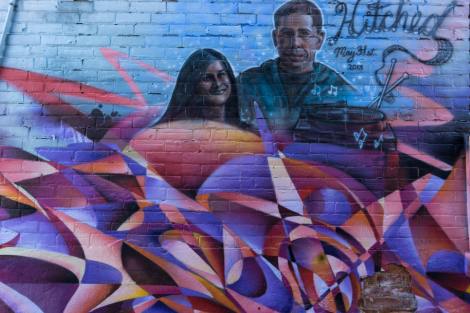 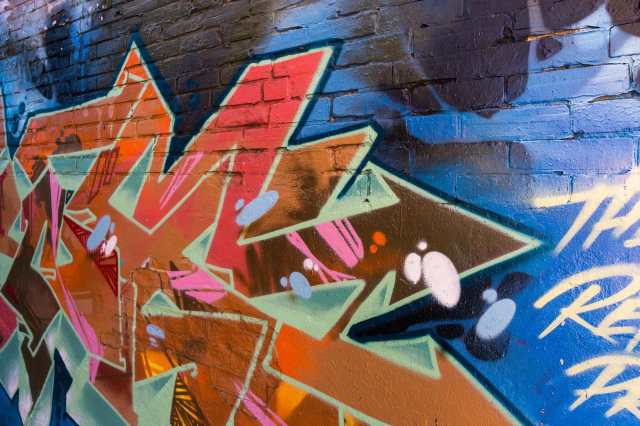 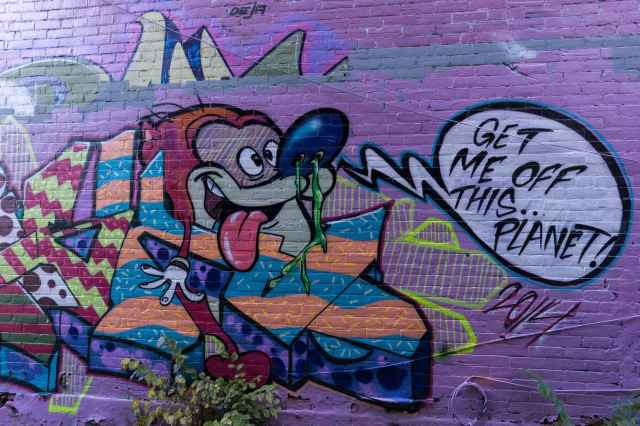 Get me Off This Planet! 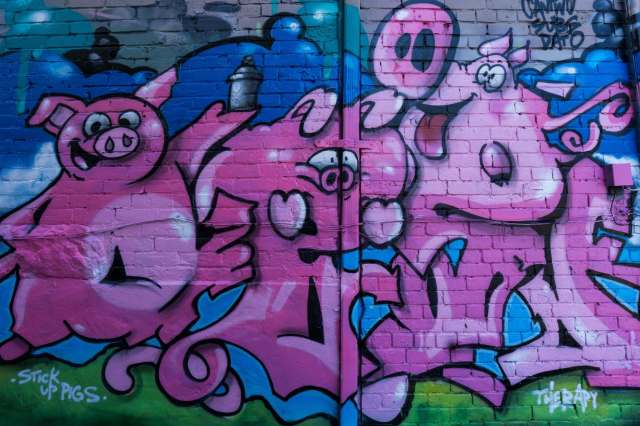 A pit stop at a Nassau Street vegan restaurant and then it was over to the west side of Spadina Avenue and a walk through Toronto’s original Chinatown as it stretches from College down to Queen Street. The first lane south of Queen is Rush Lane.

Until yesterday I just knew it as the alley that the comedian Rick Mercer regularly walks down in the biting Rant segment on his Mercer Report.  Here is an example – a rant about  then-Mayor Rob Ford from November 2013 during the depths of the “crack” scandal.

Mercer comes into the alley from Queen Street and then turns east. The Garuda mask at the very beginning is still there two years later!

I came at it from the east end at Spadina and walked all the way down to Portland, where Rush Lane ends.  The first thing I saw was a large mural of which the following is only a segment. I wish I had taken more of a panorama shot of the piece; it had the look of a pirate’s treasure map and deserved more time.  The “Toronto’ tag definitely takes away from the original.

The Treasure Map” – with Toronto as the location of the cache!

I guess that’s the thing about this “art”; it is ultra ephemeral by its very nature.  Return in six months and you’d have to wonder how many of the ones I took pix of will still be there – or still be relatively unscathed by taggers. 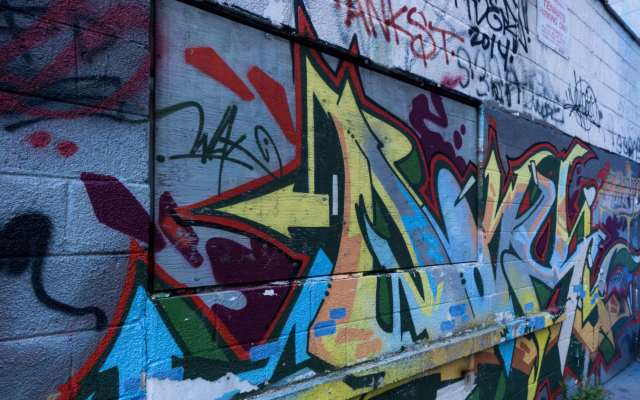 My favourite panel is the one I call “I Miss Hip Hop 1993”.  It had a nice touch of whimsy and absurdist humour. You have to wonder if it wasn’t an art project by students at nearby O.C.A.D. (Ontario College of Art and Design). 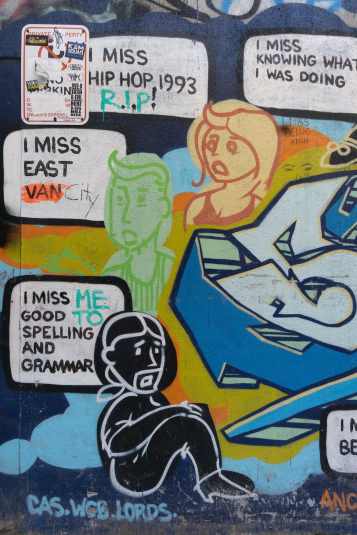 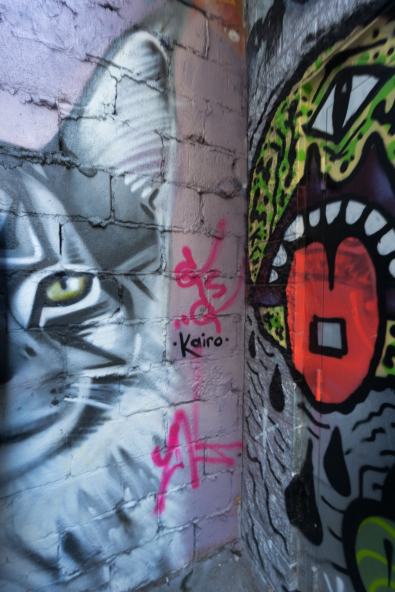 The Groundhog and surroundings

Portrait – Directions To Her Heart

One statement on top of the other or just one?  My need to create meaning somehow fused the tagger’s graffiti to the underlying portrait of a woman and what looks to be a cityscape behind and in front of her.  I took the elaborate pattern complete with arrows pointing in various directions as a maze with one goal – that of reaching her heart.

My effort at understanding? Total b.s. of course!

I was struck by how seemingly apolitical almost all the works were. Fantasy and cartoon characters predominate. 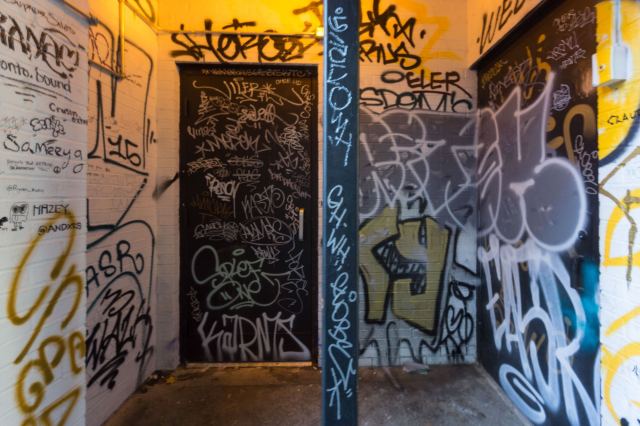 Another one of my favourites was what I take to be Death and its all-embracing reach. it is an impressive piece that must fill a 24’x8′ space.

The Face of Death

one of the hounds of hell

the next two pix – all part of what I called Aquarium Life – remind me of the one I started off with – the corner café in Kensington. Mind you, that one seems to be “Critters with teeth”! In each case, the mural is crammed with life. 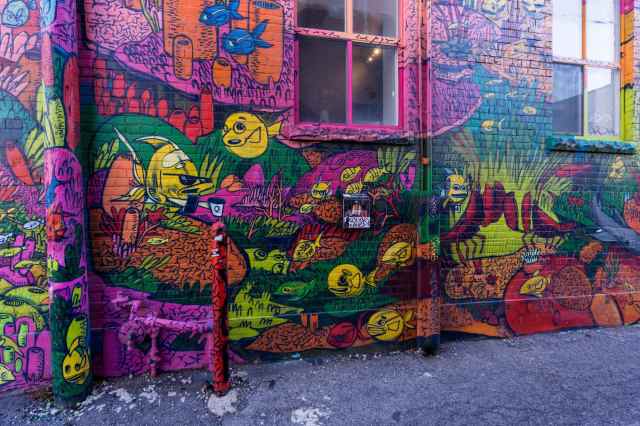 Blog TO website has an August  2012 post  “Ten Graffiti Writers Worth Knowing About” by someone who clearly knows the T.O. street art scene. One of the artists he mentioned is Elicser. Of his work the guest contributor writes –

ELICSER’s stylized portraits are a staple of Toronto’s downtown graffiti scene. The most prominent display of ELICSER’s skill is in and around Graffiti Alley (just South of Queen West, between Spadina and Strachan). Here, dozens of his finest pieces can be found. Alternately dark, mysterious, brooding, and beautiful, it’s hard to imagine T.O.’s graffiti scene without ELICSER’s stunning and affective portraits. 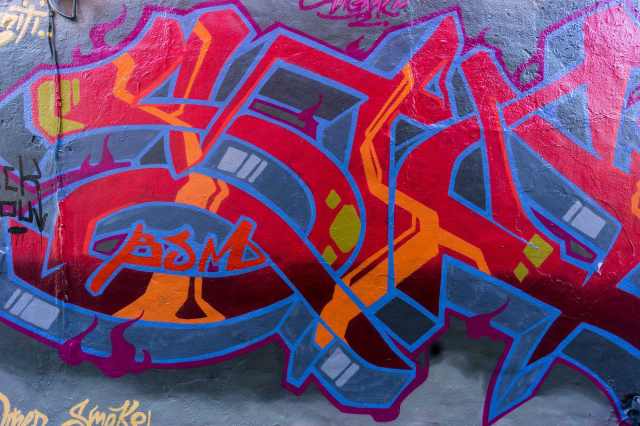 Wandering the alleyways of Kensington and Queen West turned out to be a great way to while away a morning.  I saw some incredible street art,  was sometimes puzzled and sometimes taken by the various pieces I stood in front of. The ultra-wide angle lens proved to be invaluable  since all the pix were shot very wide (i.e. 15mm).

My project for the next little while is to find out more about the Toronto street art scene.  If you are interested,  I have listed a few web sites below that provide more information.

On my way to the Coconut Grove roti shop on Dundas i figured I would cut across City Hall Square.  I hadn’t seen the 3-D TORONTO sign up close yet.  I like the way it turns everyone’s photos into instant post cards!   I hear Councillor Norm Kelly would like three more put up – this time with “THE 6“, “T.O.‘, AND “T.DOT” spelled out. Not sure where he is planning to have them put since City Hall Square is getting kinda crowded!

“Ten Graffiti Writers Worth Knowing About”.

StreetARToronto is a” City of Toronto program that aims to beautify communities across the city through street art and wall murals”.  Its Facebook page has lots of leads to city-sponsored projects and locations.

7 Cool Places To See Great Graffiti In Toronto adds five more spots to check out other than the two ramble covered.

TripAdvisor actually has reviews of Graffiti Alley!  See here for the 5/5 star ratings and comments for a tour offered by some locals who call themselves the Tour Guys ! 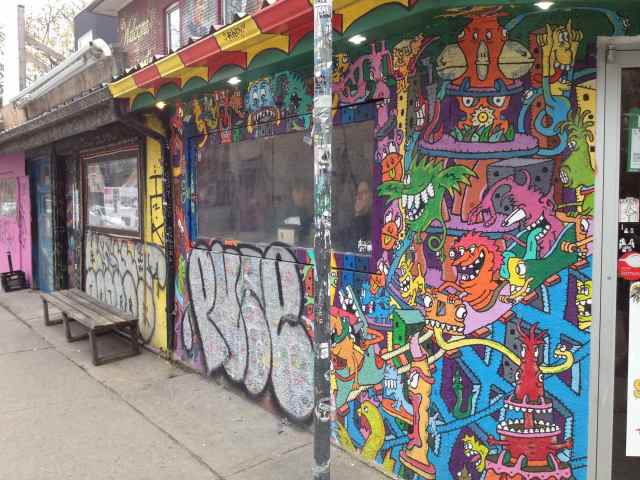 I took this pic in early May, 2106. See the first image of this post for the way it looked six months ago. “Ephemeral” is the operative word. Low grade tagging covers over much more creative work.