Previous Post: Canoeing The Bloodvein  Day 10- Goose Rapids to Below The Gammon Junction

We were a bit overwhelmed on first seeing all eighty-nine of the Bloodvein rapids on the Wilson maps. We were to find out that not all of them need to be portaged, and the ones that do can usually be dealt with fairly easily.  This day’s menu is proof of that!

From Bottom Right To Top Left 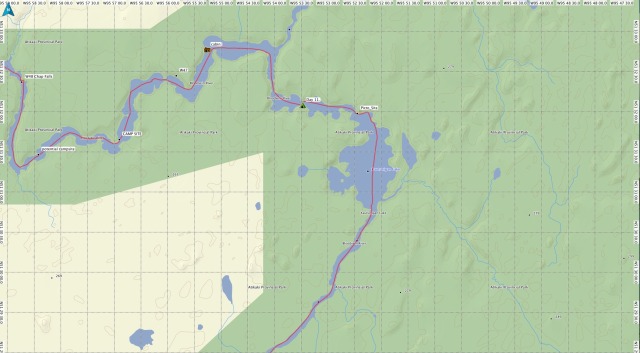 Paddling Through A Changing Landscape

It wasn’t too long after leaving our Day 10 camp that the landscape that had captivated us for the past three days was replaced by a more wide-open wetlands look with very little vertical rock lining the shores.  Add to this the evidence of a recent fire that had swept through the area and the river took on a very different feel.

The red zones in the fire burn map below show the most recent fire activity along the Bloodvein in the stretch we paddled after leaving our campsite. Next to the section of the river between Murdock and Larus Lakes, this was the one where the impact of fire was most noticeable. 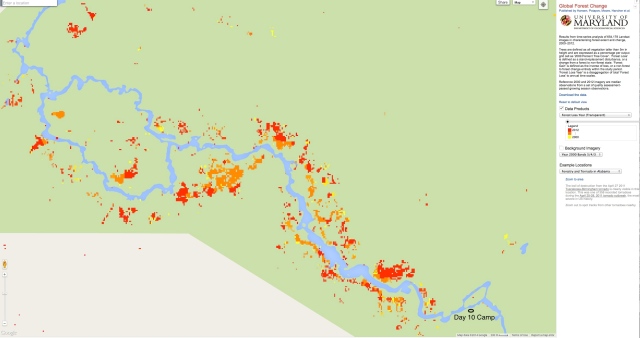 Bloodvein Burn Areas – see here for the source of the map and zoom in or out for more detail.

Oddly enough, moose seem to benefit from the kind of fire pattern that the above map indicates. Unlike a fire that devastates an entire area, the new vegetation growth in the patchwork of fire areas along the Bloodvein provides the moose population with more feeding opportunities.  We paddled by the following structure – a sign of active moose hunting in the area. 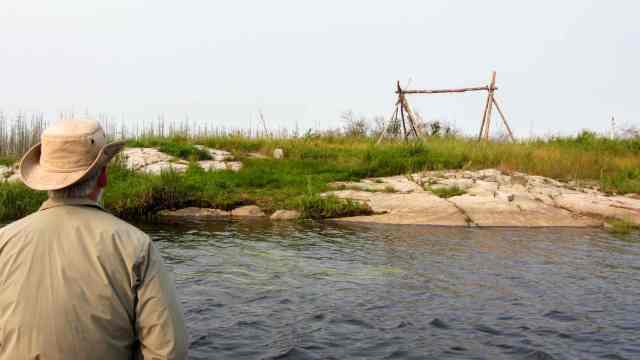 Hunters’ hang on the shore of a vast marshland section of the Bloodvein.

When we got to Bloodvein First Nation a few days later, I was walking along a dusty Main Street near the Nurses’ Clinic when an SUV stopped. The window rolled down, and the driver leaned out and, after a quick welcome, asked if we had seen many moose upriver.  I told him we’d seen a few, but none close to the village. It was mid-July, and moose hunting season opened in mid-August, so we missed the action.

A floodplain view from the morning’s paddle – we were missing the rock!

As we paddled in a more northerly direction, the evidence of fire declined, and we were looking at terrain more like in the pic below. 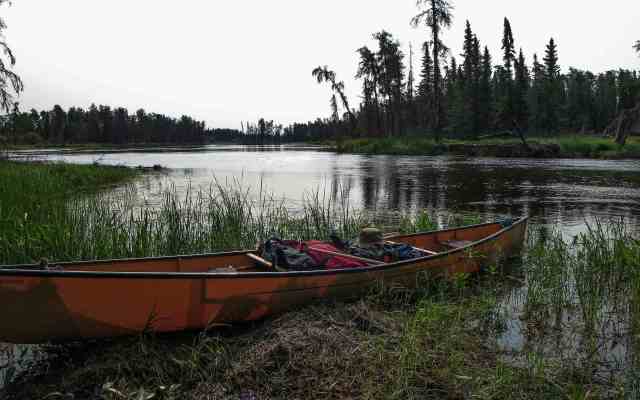 The wind and overcast conditions perhaps explain our focus on paddling on this particular day.  That, and the less dramatic landscape,  meant we took very few pix.  At times we thought we were already on the prairies, given how flat the surroundings were!

Our goal for the day was to find the pictograph site at the north end of Kautunigan Lake and then find a decent campsite.  First up were the pictographs – the images below capture what we saw. It is definitely one of the humbler collections of pictographs on the Bloodvein, and it would seem that the expiry date for these rock paintings is not too far away.

I hate to read too much into the vague lines on the granite but here goes! The squished circle seems to have the same legs on its bottom as does a pictograph at the other end of the Anishinaabe world at Fairy Point on Missinaibi Lake. The line below the circle could be a serpent – or not. We were far from the riches of the Artery Lake or Murdock-Larus sites; the headwaters in WCPP have all the great pictograph sites.

Kautunigan Lake, picto site, and campsite on the spit

Leaving Kautunigan Lake, we paddled for another fifteen minutes along an uninviting shoreline before approaching a spit on river left that has probably seen its share of campers.

(Not implied by that statement is any suggestion of garbage or defacing by previous passers-by.  Indeed, we were amazed at how pristine the various sites were all down the river. It was only in the last 15 kilometers before Bloodvein Ojibwe Village that the litter and other signs of human thoughtlessness started appearing.) 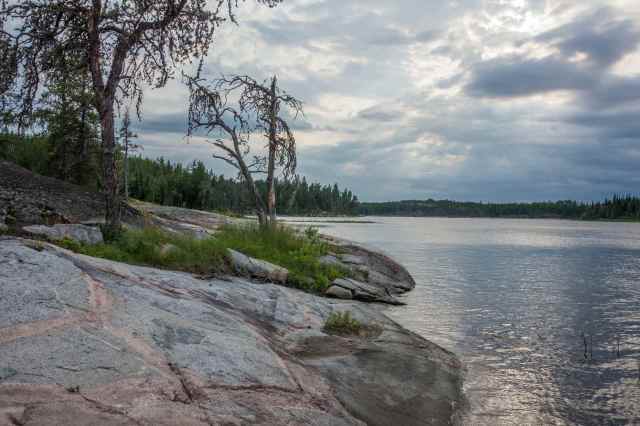 How The River Got Its Name

I figured that somewhere on our trip down the river, I would get some great shots of the red granite veins found in the river bedrock.  Well, I am not sure where those great shots are!  The two shots below are from our Day 11 campsite and give you some idea of the “blood vein” look that, in all likelihood, explains where the river got its name.

Another account involves a supposed attack by a Sioux (i.e. Dakota) war party on the Ojibwe community at Bloodvein Village in the early 1700s.  The “blood” in Bloodvein is asid to refer to the water’s colour after the battle. Presumably it was the Dakota who were wiped out.  If such a battle actually happened, it would have been little more than a skirmish. It is more likely a fanciful explanation, given the probable small number of warriors involved. It does serve as an esteem booster for those in the local community who believe it.

We were happy with the 30 km. we had paddled and hoped the next day would bring us better weather – and more vertical rock face on the shoreline!

Next Post: Canoeing The Bloodvein Day 12 – Kautunigan L. to the “Gorge” Rapids (W56)