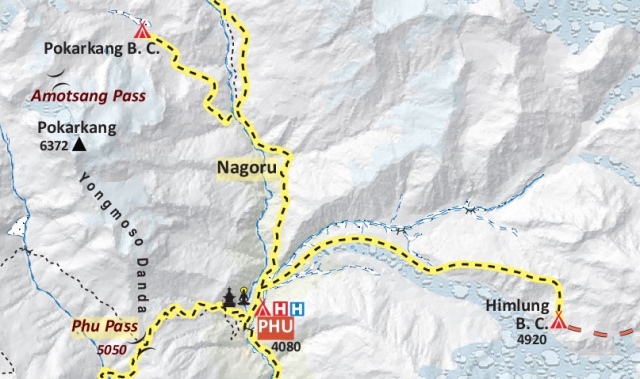 The garbage found around our campsite was a sign that it sees some use by trekking and climbing parties.  Like us, some trekking groups would use it as an overnight stop after their crossing of Saribung La.  Climbing groups with Bhrikuti Shail (6361)  or Julie Himal (6337) as their objectives might use it as a base camp and then set up a high camp 600 or 700 meters further up. [See Bhrikuti Base Camp Rubbish  in the online American Alpine Journal for one account of how garbage happens!]

As for our trekking crew, after a week and 2500 meters in altitude gain from the Kali Gandaki, we were losing altitude fast!  From Saribung La we had already dropped 1000; this day we would drop another 920!  The acclimatization worry was over! 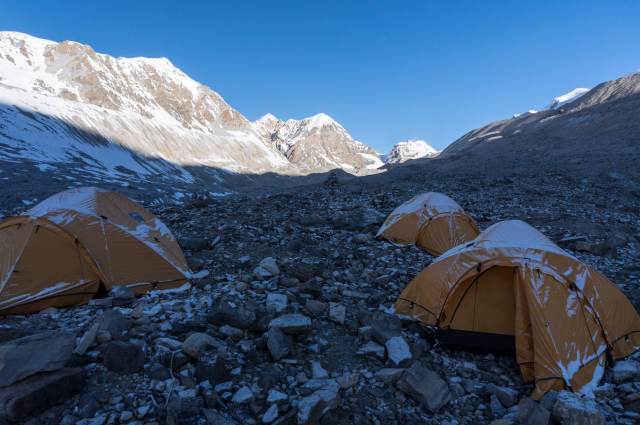 At 6:00 a.m. there was a dusting of snow on our tents. An hour later as the crew was taking down the tents, the campsite was no longer in the shade and the snow had mostly melted.

The trail also became increasing defined, thanks to a beaten-down path and frequent stone cairns and chortens that led us downward.  In the image below you can see a couple of cairns that provide reassurance in what looks like a mess of scree.

cairns show the way down the valley to Nagoru and Phu

I took the shot below about 1 1/2 hours into the day’s walk.  Amazingly, the peak you see in the center of the image is the same peak you can see left of center in the first two of the day’s photos!  Also visible are a few of the porters coming down the trail to where we are. The river we were following down at this point is the Layju Khola; it meets up with the Phu Khola at the village of Phu which sits above the confluence on the west side.  That is where we were headed. 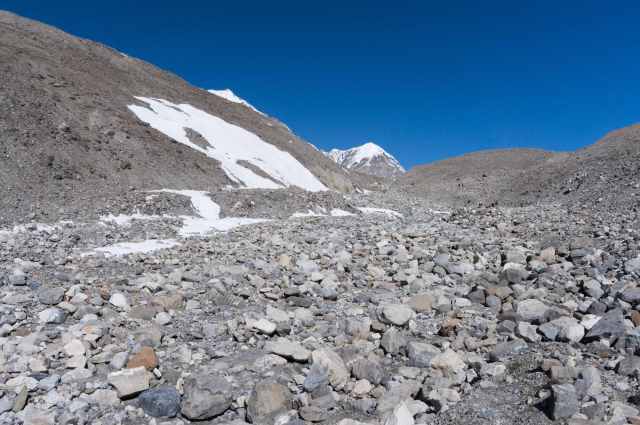 It is not as if there are 1000 meters of downhill and no climbing at all! The following shot is one of those where I got to look back at oncoming trekkers and porters.  We have left the river bank and are gaining some altitude! 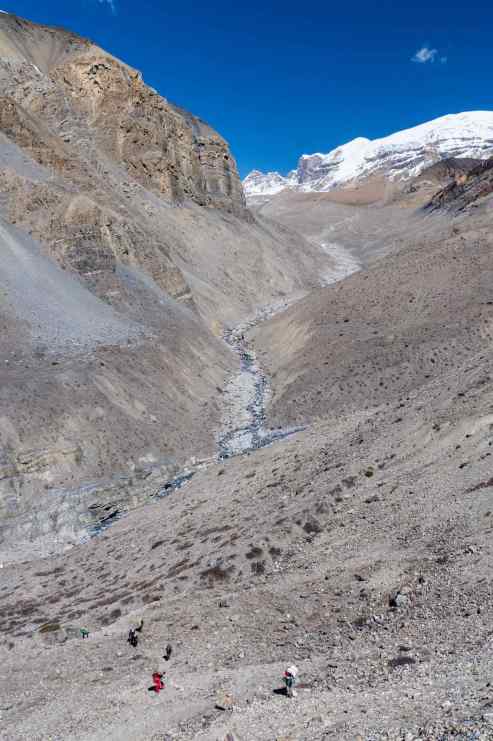 some ascent needed on the way down to Phu!

Bill spotted a yak on the slopes above us.  He could have been a wild yak but while there are an estimated 15000 in the trans-Himalayan region they are considered to be extinct in Nepal. More likely it was a stray domesticated yak who had become separated from his herd. 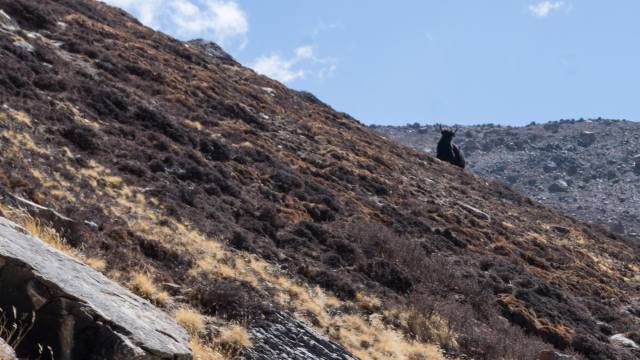 a stray yak in the hills above Nagoru

Ten minutes later we passed a herder’s shelter but there was no evidence inside that anyone had been there for some time.  The stone walls of the animal pen were also in a state of disrepair. However, it was still early in the spring; the herder would likely be up in a week or two.  Perhaps he would also find his missing yak!

a yak herder’s shelter on the trail to Nagoru

yak herder’s shelter on the trail above Nagoru 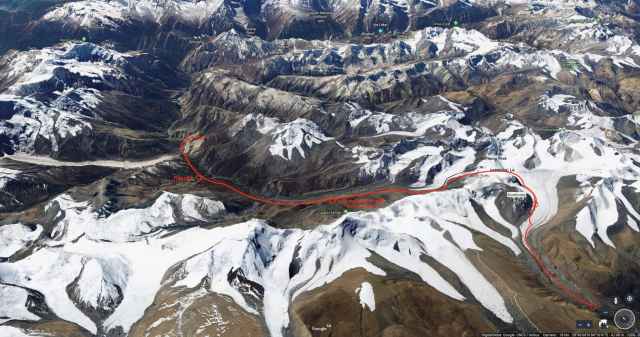 The first settlement we would come to on our descent to Phu was the abandoned village of Nagoru. We would pass a few chortens on our way there; by now I had decided that I would not be taking a photo of every chorten from Kagbeni to Koto!  But – here are two more that I did point my camera at!

terraces on the hillside at Nagoru 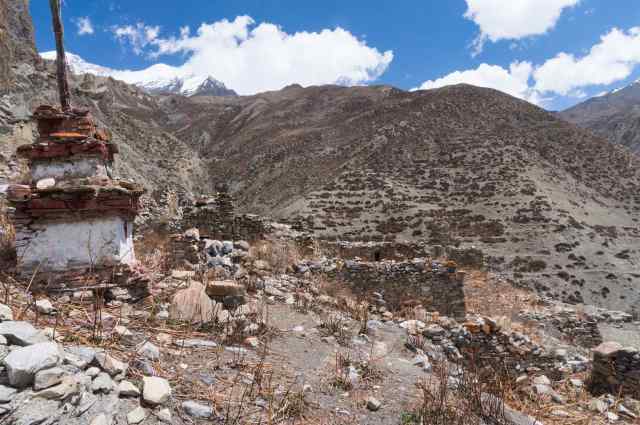 Above the path which goes past the chorten and into the village from the north is the rock face you see below. A few caves and a splash of the red ochre paint used on gompas. We had seen the colour on chortens and on gompas from Kagbeni on up to Luri Cave’s front facade. Then we walked through the ruins of the abandoned village.  Even when it was alive, it would have only been a seasonal settlement. In the winter people went down the valley to Meta or below where the weather was less harsh.

cliffside caves above the site of Nagoru 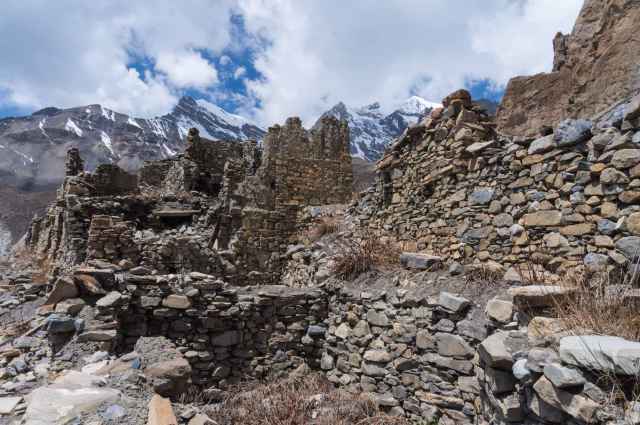 a view of Nagoru’s stone buildings

The cook crew was already busy preparing lunch as we stepped over the almost dry Jyamdau Khola to our “dining room” on one of the many terraces in the vicinity. Lots of liquids – juice, soup, tea – and a peanut butter chapati or two.  I hadn’t had a chance to dry my boots the previous day after our traverse because the afternoon had been overcast. Now I took them off, took out the footpads,  and set everything in the sun.  Dry feet are happy feet! In the image below that is the Jyamdau Khola running diagonally from middle right to bottom left. We are on the south side of the river and the village remains are on the other side to the left. 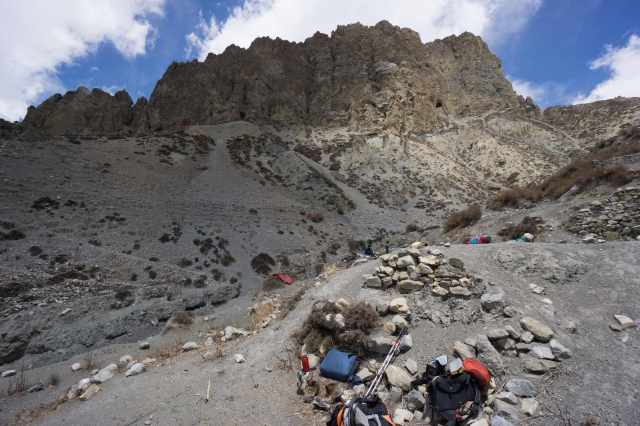 from Nagoru trailside chortens show the way down to Phu

We were now on the other side of a steep valley wall we had climbed up and I turned around to get a last look at Nagoru.  For one of maybe four of the 1000 photos I took, I changed lenses to my 75-300mm telephoto and zoomed into the view you see below.  Nice lens to have but dead weight most of the time!

On the bottom left is the trail we followed past the village entrance chorten; above the chorten is the cliffside caves and the ochre paint. The ruins of the village itself are visible in the bottom middle of the image, looking like the next “sandslide” will cover them up completely.  After two weeks of walking on sand and other larger bits of broken mountains and contemplating the impermanence of all things,  it was time for “the works of man” to get the same treatment! It is easy to get into a Buddhist frame of mind!

trailside chorten below Nagoru in the Phu Valley

1:40 – approaching Phu from Nagoru – another three kilometers to go!

We had left our moraine campsite at about 7:15.  It was now 2:15 and we were looking at Phu, our destination for the day, having descended a whopping 1000 meters (and probably ascended another 200!). 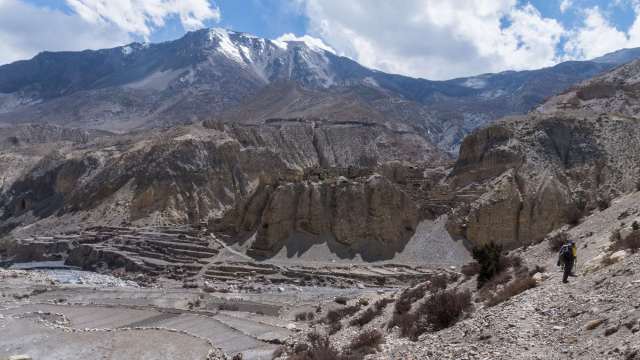 a View of Phu from the north

The trail leads down to a couple of bridges below the steep sand slope you see towards the right-hand side of the image.  We would cross the old wood one and sit there for a while before beginning a climb up that sand slope.  Luckily three people were coming down the slope; they were on the way to the monastery. They told us to follow the path at the base of the rock face to the entrance to the village. So – back down we went! We had been spared an unnecessary climb!

They were the first people we had seen since the retreating climbing party in Ghuma Thanti five days before.

Waiting for the crew to get the tents up, I bought a can of Coke and got my camera gear ready.  Then, after unpacking my duffel ad setting up the Thermarest and the sleeping bag, I set off for a ramble through the village.  While the place seemed almost deserted, it asks to be photographed thanks to its layout and architecture.

My next post looks at the village and the surroundings. While we left the very next morning,  I could easily have spent another day there.  A word to those walking up to Phu from Koto – set aside two nights at Phu. Do not walk all the way up to Phu only to turn around the next morning!

our Phu campsite by the Tashi and Karma Hotels