It had been a cool evening and more rain fell overnight. In the morning a mist hung over the bay and the falls area. After we packed away all the gear – wet from the past day and a half of bad weather – we put the bags underneath the overturned canoe. Then we took to the trail leading up to the falls. We followed it as far as it went and then bushwhacked a bit further to get up to the very first of the several drops in the Falls. We stood there and watched the river that we had followed from its very headwaters. Now one last emphatic rush as it merged with Missinaibi Lake and the Missinaibi River system – 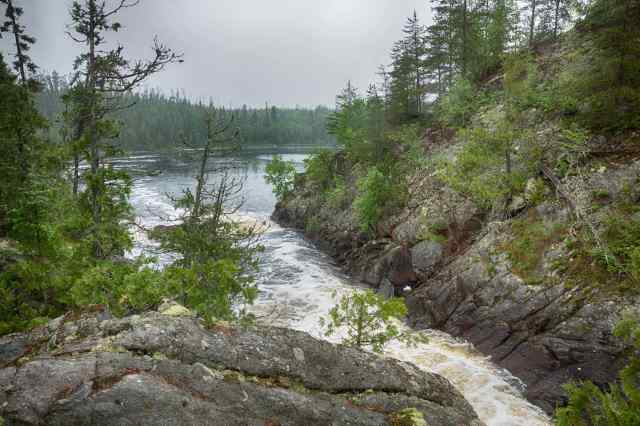 looking up at the lake above Whitefish Falls 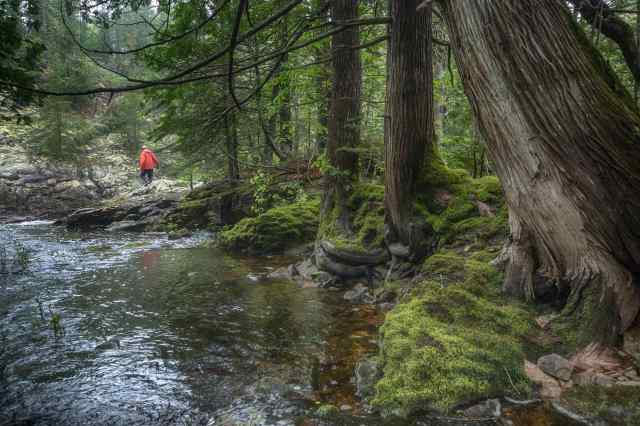 Whitefish Falls exploration scene – up at the top

the top of Whitefish Falls on the Little Missinaibi River

the Little Missinaibi at Whitefish Falls – working on a shot

Our goodbyes to the Little Missinaibi done – as well as all but one of our images which include a guy in a red or orange rain jacket! – it was time to move on.

It would be a day devoted to the pictograph sites at the west end of Missinaibi Lake. In the early 1980’s we had paddled by them a few times in a hurry to get to the east end of the lake. That is where one of North America’s great wilderness river adventures starts, the one that takes paddlers all the way to James Bay with the guarantee of lots of thrills – and a few spills – along the way. But there was no hurry this day since our planned campsite was maybe twelve kilometers away. 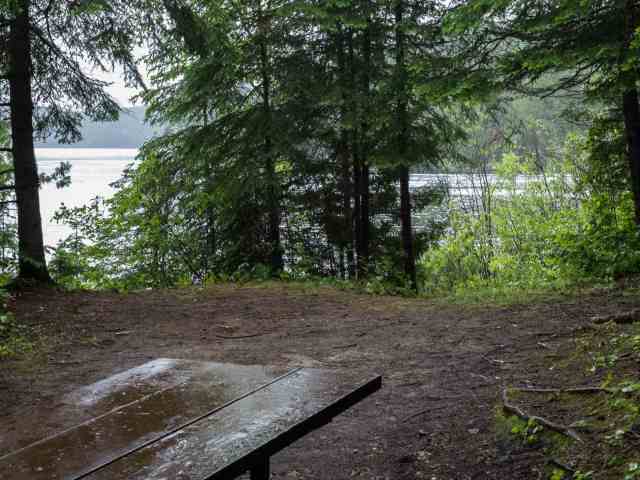 We would have our tent up on Red Granite Point by mid-afternoon. 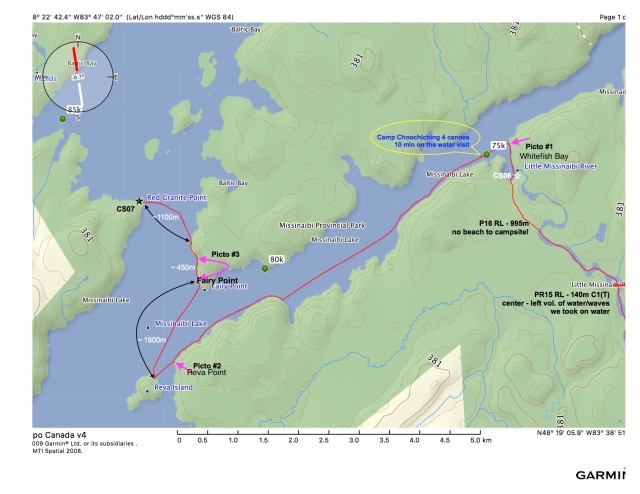 Whitefish Falls – a shot from the Bay

archaeological zone across the Bay from the Falls and the campsite

After a brief look at the “Sensitive Area” on the west side of the bay, we paddled back across to the first of the three pictograph sites we would visit on Missinaibi Lake. Since all face west, the ideal time to visit them – at least in terms of light if it is a sunny day – is later in the afternoon. We were just happy there wasn’t a significant wind blowing from the NW or SW and that it was hardly raining.

The Ontario Parks map has all three pictograph sites indicated with brown circles. Unfortunately, two of the three locations are incorrect!

It places the Whitefish Bay site where the “Sensitive Area” sign that we were paddling away from is; the site is actually on the other – i.e. east – side of the bay. The Reva Point site is also incorrectly located. It is just across from the northern tip of the island and not, as shown in the map above, to the south of the island!

Once on the other side of Whitefish Bay, we paddled past the two rock faces you see in the image above. We were headed to the more vertical rock face almost at the end of the bay. In the image above it is not yet visible; the two pix below do show us getting closer. 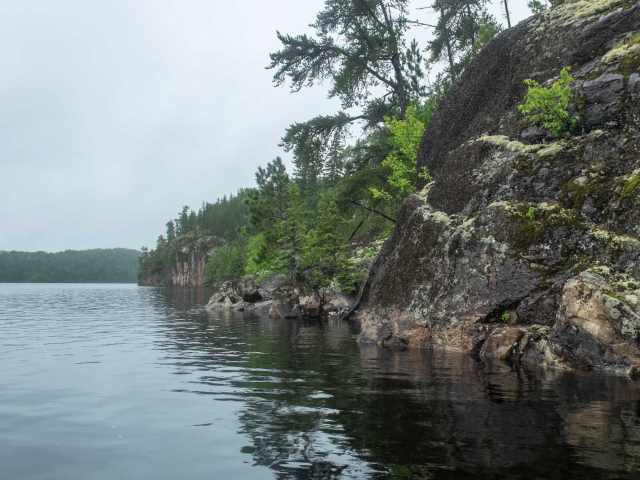 the east side of Whitefish Bay 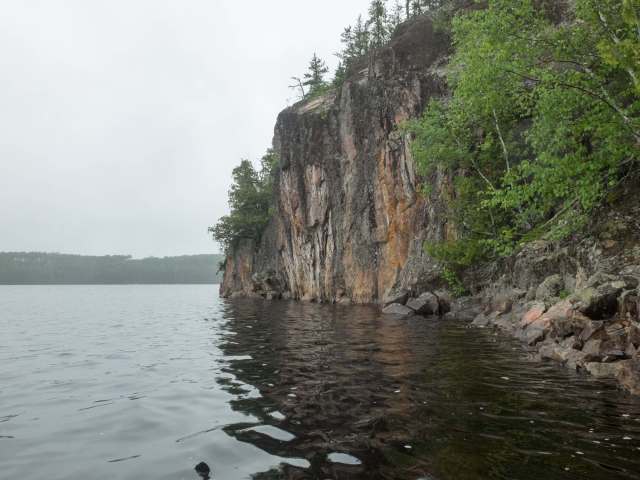 The Whitefish Bay site is the most humble of the three we would visit; some of what look to be pictographs are actually bits of red granite vein.

some of the Whitefish Bay pictographs – or natural red veins in the rock?

If you are interested in seeing more images and discussion of what we looked at this day, check out a post dedicated entirely to the three sites –

The Anishinaabe Pictographs of Missinaibi Lake

As we paddled out of the bay and headed west we met the only other paddlers we would see during our nine-day trip.  The canoe party was a group of six boys from a Minnesota summer camp at the start of their epic adventure down the river to Mattice. Given the less than ideal conditions over the past two or three days, their positive attitude was impressive. Though some of the boys looked no more than twelve, some already had tripping experience and the two older guys leading the group looked to be excellent role models. We are always heartened when we see a younger generation doing what we love to do! 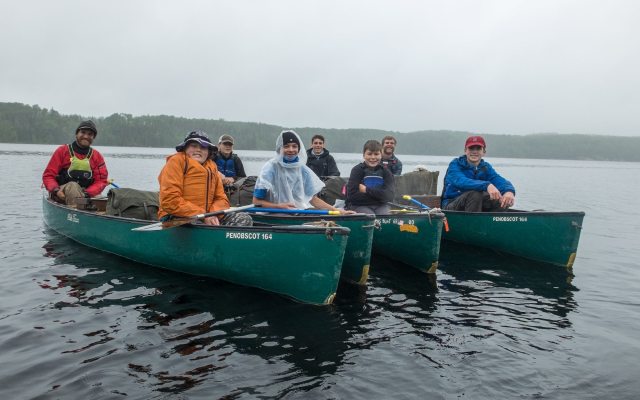 the paddlers from Camp Kooch-i-ching in Minnesota

Paddling along the south shore of the lake we appreciated the lack of wind. The following pix show an almost ripple-free water surface. Next up – Reva Point, a seven-kilometer-or-so paddle from the Whitefish Bay site. The rock images there – six or seven of them – were easier to “read” than the ones at the first site. We spent a few minutes checking them out and then headed to the north end of Reva Island. 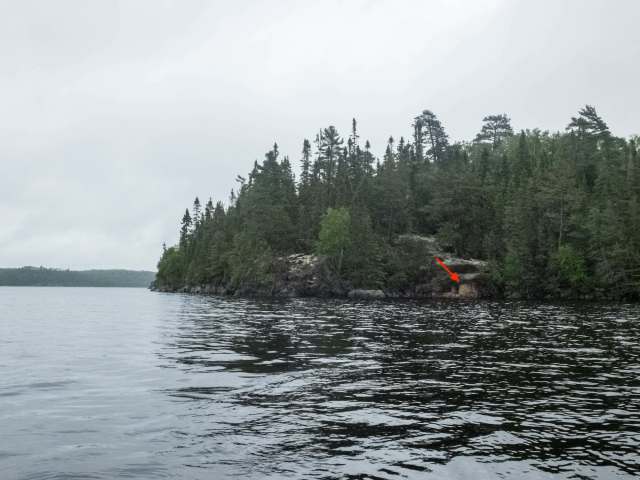 We had planned to spend some time with the 350-year-old white pines on the island. We may have had in mind something like the trails through Temagami’s old-growth forest between Obabika Lake and Chee-Skon; we would learn that Reva island has not been groomed like this. The “No Access” sign to the left of the white pine that Max is sitting under was another reason for our decision to move on to Fairy Point.

the white pine at the north end of Reva Island

A possible explanation for the “No Access” sign may be the fact that archaeological work on the island in the 1960s and 70s  uncovered evidence of a Terminal Woodland /early post-contact site with a date of about 1590 A.D. Along with the usual stone artifacts – mostly scrapers and projectile points – were gun parts and a possible gunflint. A ceramic fragment found at the site is seen as evidence of contact with groups in Wisconsin or Michigan.  See here for a summary of the site’s significance by the archaeologist John Pollack. As with the seasonal traditional pre-European- contact campsite on the west side of Whitefish Bay with the “Sensitive Area” sign, park visitors are discouraged.

Reva Island as an Indigenous site is also mentioned in Hap Wilson’s Missinaibi: From Lake Superior To James Bay By Canoe (2004 reprint of 1994 first ed.) guidebook. We read:

…the island may have served the Anishinabeg as an ancient burial site where corpses were perched in prominent trees in order to watch family members passing by….Occupation and activities of the island date back as far back as 5000 years. (p.50)

The details don’t agree at all with the archaeological record. Instead of 500 years,  Wilson has it as far back as 5000!  Instead of a seasonal habitation site, it is (maybe) a site where tree burial was practised with the added modern reinterpretation of the traditional ritual as one that has the corpses placed there to watch the living! Bone fragments – human or other – were not mentioned by those who examined the site. Given the nature of the soil, this is not a surprise. 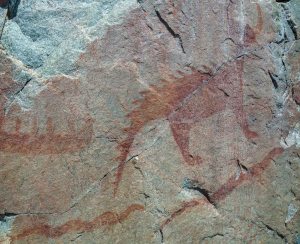 Mishipeshu and the snakes – Agawa Rock

Sitting at the north end of Reva island we marvelled at the incredible quality of the light as we looked back to the Reva Point pictograph site and over to Fairy Point. It had stopped raining. The short paddle across to Fairy Point can be a bumpy ride when the wind is blowing, especially down the open stretch of water from the south-west. The waves have all of South Bay to roll down before they crash into Fairy Point. No wonder the Ojibwe had stories of underwater creatures like Mishipeshu, the lynx-like creature who lets his displeasure known by overturning the canoes of those who have somehow angered him.

A click on the image below will reveal the locations of the two rock image sites; Fairy Point is about one kilometer across the open stretch of water. Note the absence of waves or raindrops! 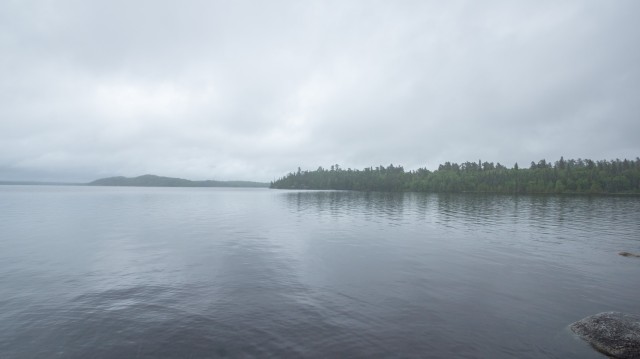 Max heading my way on the east side of Reva Island

Approaching Fairy Point from the south was a different experience.  On previous occasions we were coming at it from Crooked Lake at the beginning of a Missinaibi River trip, one that either finished at Mattice or further down at Moose River Crossing or Moosonee. The uncooperative weather meant we often just zipped by the Point after giving a panel or two a quick glance. We would make amends with this visit!

The pictograph site faces west. We started at the southern end of the point and slowly made our way north along the shore. We spent about a half-hour in pictograph-quest mode though it felt like we had paddled into some timeless dimension. Perhaps it is the act of framing a string of photos that creates this Zen-like state; you are so focused on this one thing that all else fades away!

The image below is of the first pictographs we saw – a humble start. You can see a couple of ochre slash marks, the one on the right with two short arms at the top and the bottom. To the right is an almost-gone hematite smudge, some of which is undoubtedly behind the lichen. 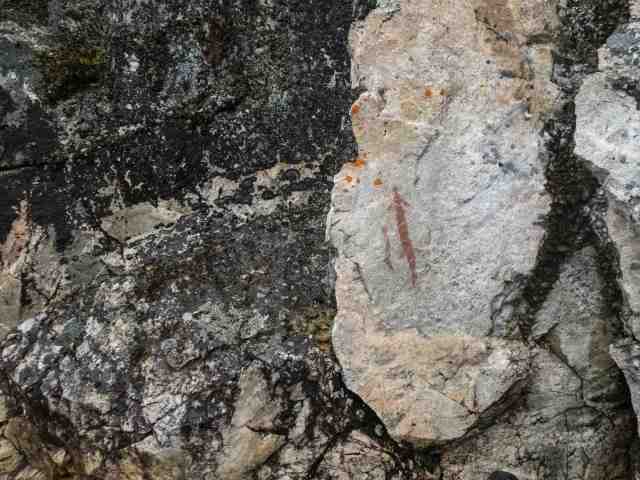 We continued along, amazed at how many pictographs there are at the site. Soon we got to the one panel we were familiar with from our other pass-bys. Along with the Mishipeshu and canoe panel at Agawa Rock, it may be the most well-known and most photographed pictograph panel in north-eastern/north-central Ontario. It doesn’t hurt that it comes right at the beginning of a very popular canoe tripping river!

See our post – The Anishinaabe Pictographs of Missinaibi Lake – for much more detail and many more photos of the various panels of the site. I’ve incorporated Dewdney’s “Faces” and Conway’s “Panels” in my account of the site’s rock paintings;  their analysis provides some substance and moves the experience beyond merely seeing without understanding what it is we’re seeing.

We spent about a half-hour at the site before turning our thoughts to a campsite for the night. There were a few options and at first we headed for one of the island sites to the north of Red Granite Point but, on looking over, decided that Red Granite Point with its extensive flat rock patio along the shore looked pretty inviting. 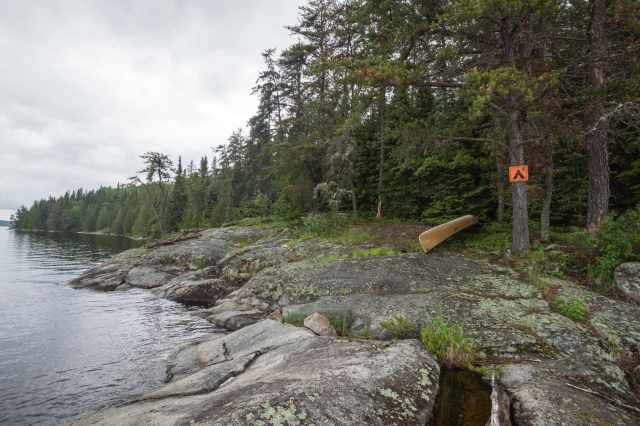 The Red Granite site is an excellent one with room for a few tents, the already-mentioned rock face along the shore, and a “thunderbox”. We got the tent up and put the tarp on top of it on the chance that there would be yet more rain overnight; we also put up our bug shelter. 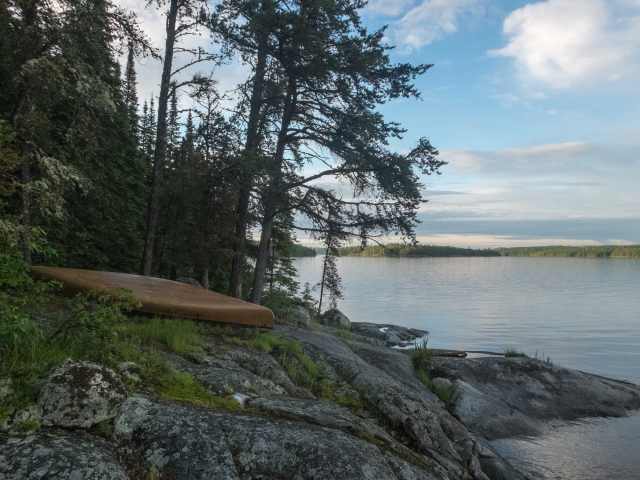 looking up Baltic Bay at a couple of other campsite possibilities 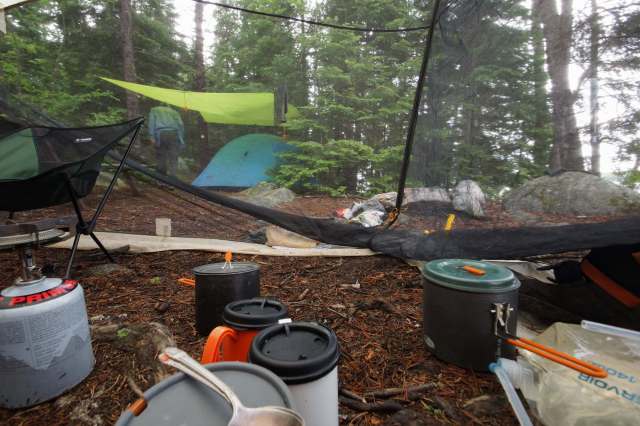 stuff inside the bug shelter

As afternoon turned into early evening the skies cleared and the sun shone freely.  Yet another “plus” for the Red Granite Point campsite presented itself!  We looked over to Fairy Point and were struck by the golden glow of the rock face.

We considered paddling over to take advantage of the special light but were not sure it would still be there when we got there. It was about 9 p.m. and the light was fading quickly; it would take a good 20 minutes to get there so instead we contented ourselves with the view from our campsite.

looking over to Fairy Point from the Red Granite Point campsite

a panorama shot taken with my Fuji X20 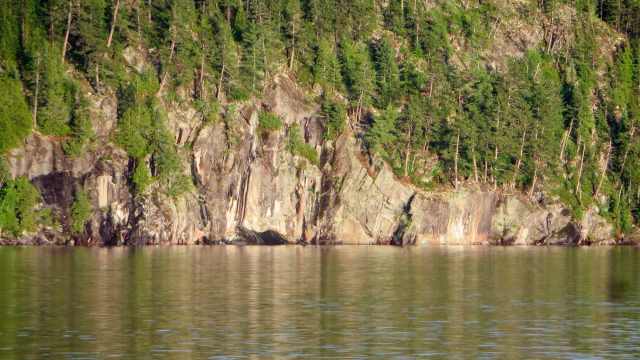 a close up of one section of Fairy Point’s vertical rock face. with Max’s Canon SX280

The next day would be a Wednesday. We were nearing the end of our short trip with two days of lake paddle coming up.